“The bad guys assemble a cadre of gimmicky professional killers to take out the hero” is a cliché of action fiction. And the team assembled by the Committee to ice Moon Knight in 1980 has all the usual suspects – the sniper guy, the martial arts guy, the explosives guy, the strongman…

Ice was introduced as Detroit’s premier hitman. He’s a solid sniper (though of course, against super-heroes with a BODY of 05 or more and Hero Points , it always result in grazing hits) and a good hand-to-hand combatant.

While he would like to project the impression that he has nerves of steel, that is not actually the case.

Ice is from the Detroit – a sniper and assassin in a crime-riddled city. He was hired by the Committee in an attempt to kill Moon Knight, but only got in a grazing hit and barely managed to flee.

When the other hitmen hired by the Committee also failed two of the lot, Boom-Boom and Bull, approached him. They felt that banding to betray the Committee and run away with the cash would work better than trying to kill Moon Knight.

Ice pretended to go along and betrayed them in return. Knowing that Boom-Boom planned to blow up the Committee place as soon as they had robbed it, Ice put locks on the doors from the outside, to trap them in.

Whilst Boom-Boom was seemingly killed, Bull escaped and was engaged in combat by Moon Knight. Ice did not manage to shoot Moon Knight, but did hit Bull, seemingly killing him. Ice’s sniper perch was then invaded by Marlene Alraune.

Ice may have eventually overpowered Marlene, but Moon Knight came in. Ice was arrested along with two of the other hitmen, Razor and Dragon.

Ice is a cool, self-centered, paranoid customer. He does his best to look aloof and professional.

His paranoia means he will try to betray others rather than give them a serious chance to betray him.

“Got him. Now to find the body, as proof of the kill.” 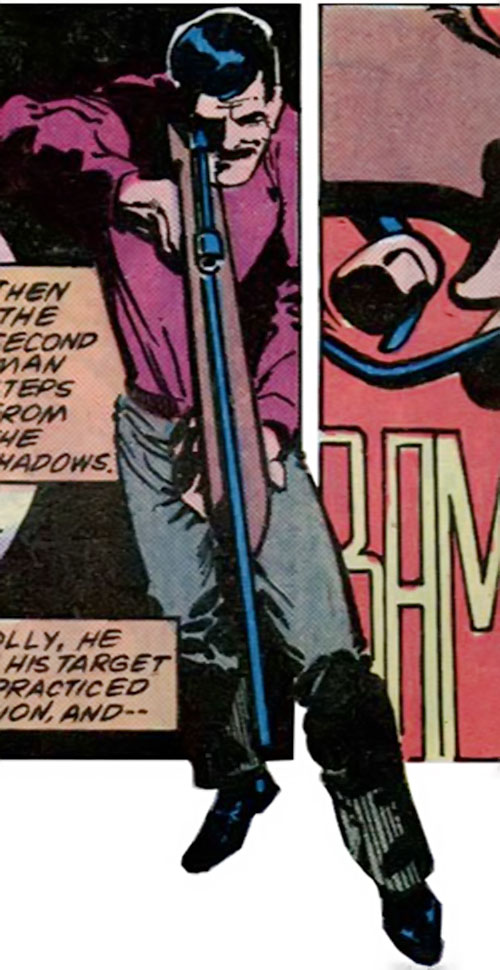