Iceman can completely cover himself in a thin layer of ice. As a mutant, Bobby possesses the ability to create ice from the moisture in the air. This means he can form projectiles of any kind.

For rapid travel he creates an ice bridge through the air which he slides along. He can also generate ice blasts from his hands and create almost any ice construct.

Iceman is fond of creating an ice loop when confronted by a vehicle coming at him. Normally, after passing through the loop the driver will be slightly disoriented, lose control of the vehicle, and crash.

Iceman is on good terms with the U.S. Government. He even has a secret code-name with them. They can contact and send information to him using this name on normal news broadcasts. Bobby uses the communications equipment in the trio’s apartment to communicate with his government contacts.

Bobby’s unique ability to create ice began to manifest during infancy. After he froze not only his baby bottle but various objects around the nursery, his parents became concerned.

Worried that people would not understand their son’s mutant powers, they hid what was later termed ’the family secret.‘

The details as to what actually transpired between his parents remain uncertain. But it is established that his mother went on to have another child, his half-sister Aurora Dante. By all accounts Aurora — who later became known as the mutant Lightwave — and Bobby enjoyed a typical sibling relationship. 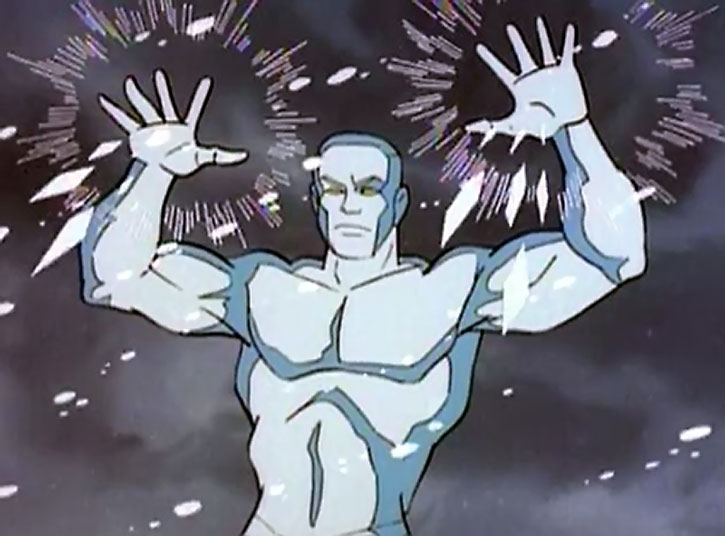 As he grew up Bobby’s ability to control his gifts remained inadequate. Afraid therefore that someone would inadvertently discover his talents, he was reluctant to socialize and as a result became something of a loner throughout his school days.

He’s as cold as ice

It was not until he reached High school that “Iceman” truly began to emerge. After accidentally causing the air conditioning system to pelt snow down upon his peers during a school dance, Bobby firmly resolved to master his gifts.

He practiced in secret and despite a few minor set backs soon prevailed. Yet he remained dubious about showing anybody what he was capable of.

The hesitancy he felt over openly demonstrating his powers soon dissolved when he was faced with a potentially disastrous situation. While out for an evening walk, Bobby’s attention was drawn to a burning building with somebody trapped inside.

Putting all self doubt and apprehension to one side, he quickly transformed into Iceman, constructed his infamous ice chute, and saved a woman’s life. Not long after that experience Bobby was telepathically summoned to New York by Professor Charles Xavier, leader of the young band of mutants known as The X-men.

Once there he became an active member of the team, training along side The Angel, Beast, Cyclops and Marvel Girl.

Iceman’s first encounter with Spider-Man came long before the Spider-Friends group was originated.

Bobby watched J. Jonah Jameson speak out on national television and offer a ’handsome reward‘ to anybody willing and able to capture Spider-Man. The young mutant decided that this would be the perfect opportunity to prove himself “d hero and not a freak.”

Having tracked down the Webbed Wonder, Iceman battled it out in Central Park. Spider-Man eventually talked Iceman into letting him prove that Jameson was a fraud who would back out of his deal. Spidey feigned capture and he and Iceman set out for the Daily Bugle building. 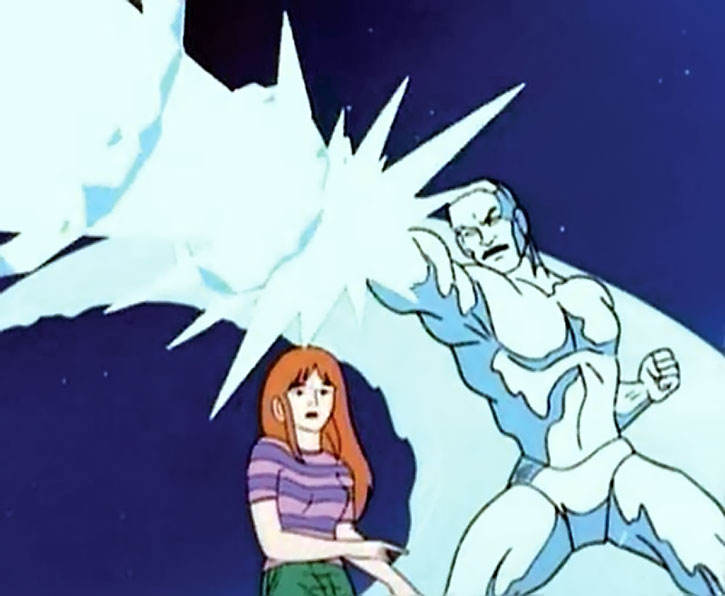 Once inside, Jameson showed himself to be the snake in the grass that Spidey had predicted, and Iceman left. Bobby went on to meet Angelica when he and the other X-Men tracked her down and asked her to join them.

The pair eventually left the team and both enrolled as students at ESU. At this point, they were unaware that Peter Parker was also a student there.

Considering their previous confrontation it is perhaps not surprising that there was a certain amount of animosity in the atmosphere when Iceman and Spidey came in to contact again. This time it was during an inventors convention.

Ironically enough the duo also displayed hostility towards each other when they were first introduced as Peter and Bobby by Angelica.

Despite any early antagonism however, the pair were soon reconciled when Spidey revealed his secret identity. He then asked Bobby and Angelica to join him as a team. The two have since become firm friends although the occasional bout of good-natured competition does erupt between them from time to time.

Bobby currently boards at May Parker’s with Peter and Angelica and continues to study at ESU.

Iceman’s “costume” is a sheet of ice covering his entire body. He does appear to wear a pair of ice colored trunks. 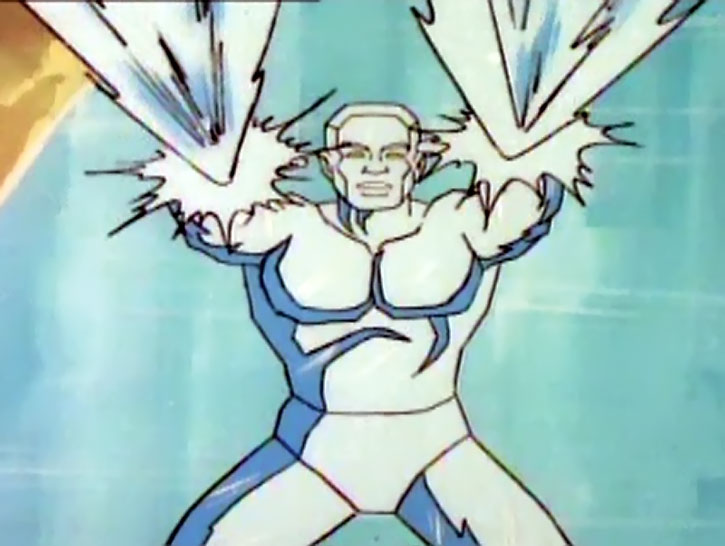 Iceman is an easy-going guy. For the most part he doesn’t seem to worry about anything. The sole exception is paying Aunt May her rent on time, which he often struggles with. His conversation is continually laced with bad ice-themed puns. He’s also a card carrying member of the Polar Bear club. 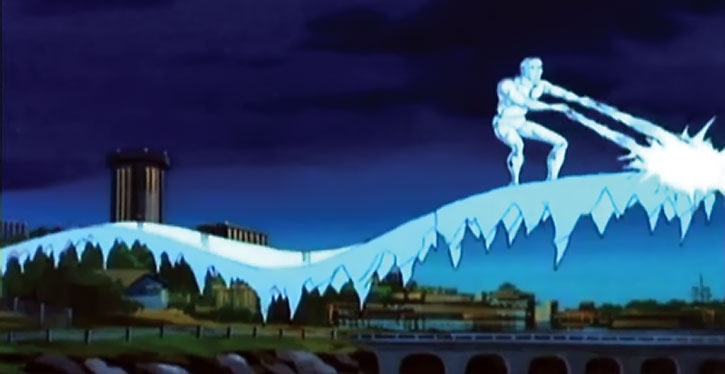 Emotionally Bobby Drake is like the ice he manipulates — not cold but transparent. He’s devastatingly honest. He is very up-front with his emotions and his thoughts all the time. Also, he’s obviously incredibly brave when confronted with danger.

Bobby’s emotional honesty is sometimes seen as being immature. Especially in matters of love. Iceman often plays the “cool” guy to the ladies. He loves flattery and usually gets into trouble when dealing with the opposite sex. 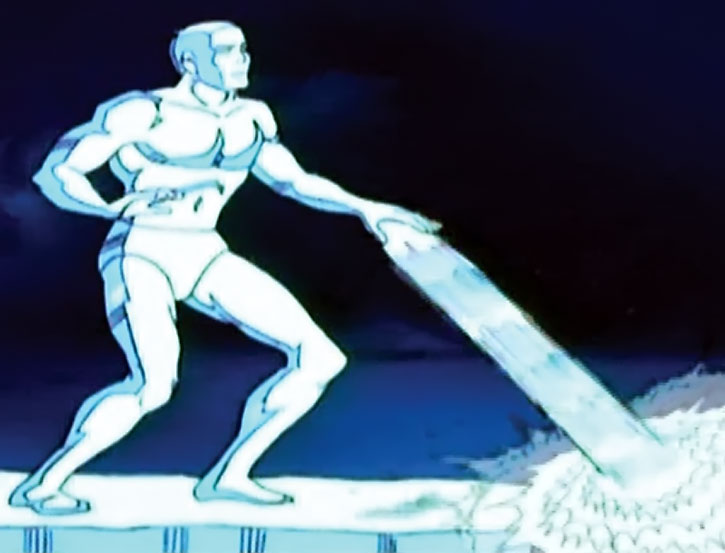 Bobby doesn’t seem to be the brightest person when it comes to hiding secrets, even his own secret identity. Many times he starts to say something but then realizing what he’s about to say switches it. For example, signing an autograph as Iceman for Aunt May he says “Here you go Aunt…I mean Mrs. Parker.”

Bobby is strongly devoted to his half-sister Aurora and he will take her side in most things. He even stopped Spider-man from capturing her when she seemed to be a villain.

“Here I come to help my chum cause he was dumb.”

“No time to take the bridge, so I better build my own.”

Iceman: “Saving your life is getting to be a habit.”
Spider-Man: “That’s one habit you shouldn’t break.” 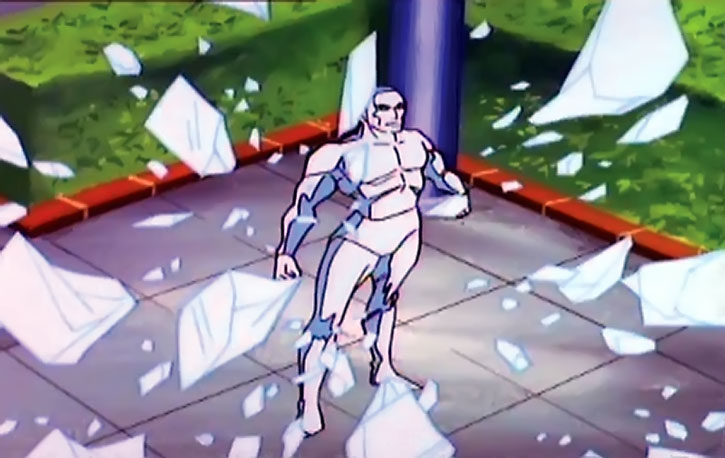 “Over our dead bodies !” (Dr. Doom raises a hand towards Iceman) “Eh, that is just an expression.”

Queen Zerona: “I am helpless, Ice god, but do not worry, I promise I will make you happy throughout all eternity !”
Iceman: “All eternity. That’s a long time. Oh, why am I so irresistible ?”

“Momma told me to watch out for girls like that.”

Spider-Man: “Spider friends !”
Spider-Man, Iceman, and Firestar: “Go For it!”

“We all know revenge is sweet, but it’s best served… cold.”

This version of Iceman lives in a New York City that is nearly vacant of citizens. Stan Lee runs a pet shop in the city and Marvel Comics Headquarters is a familiar backdrop. Adamantium  is easily obtained by super-villains, S.H.I.E.L.D., and the NYPD.

A 630 points Character (without ice-made equipment)

Drawbacks:
Minor Irrational Attraction to attractive women, Gradual Loss Vulnerability to Heat-based attacks (Iceman loses 01 AP of each power per phase instead of every minute but regains his full power levels immediately when the Heat-based attack is removed. If powers reach 00APs, Iceman immediately falls unconscious), Mistrust (Mutant, not in Season 1), Secret Identity.

Source of Character: The 1981 animated series Spiderman and his Amazing Friends, voiced by Frank Welker. 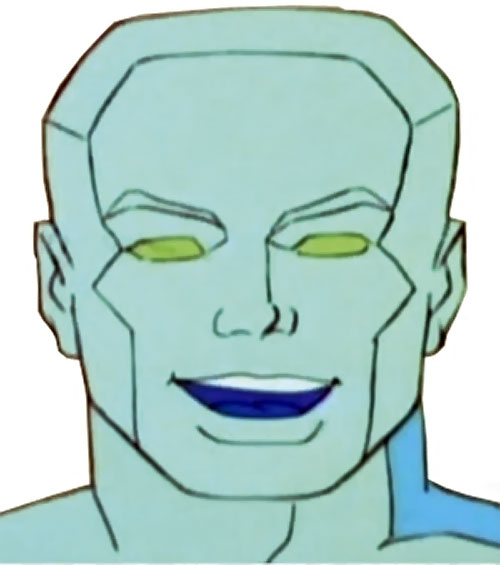 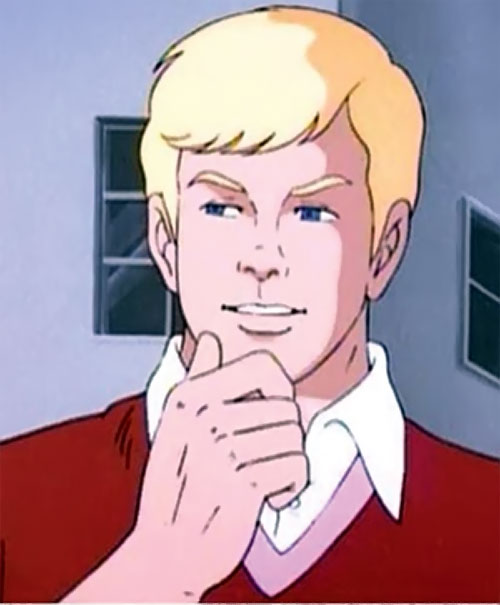 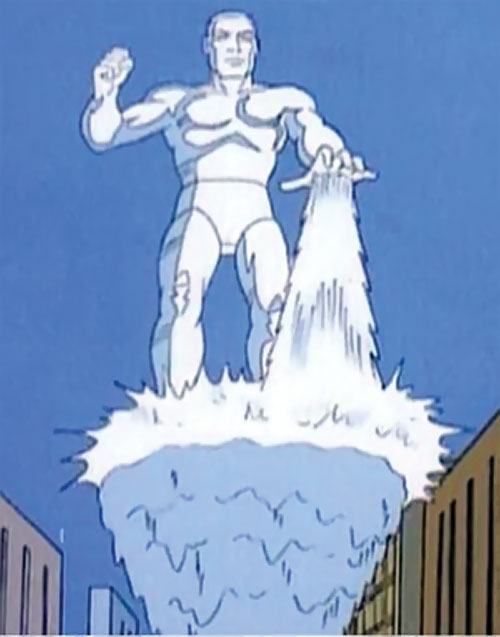 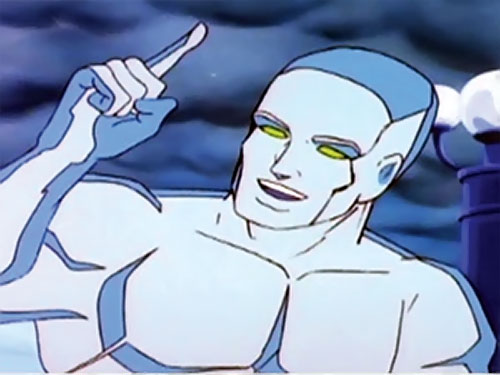 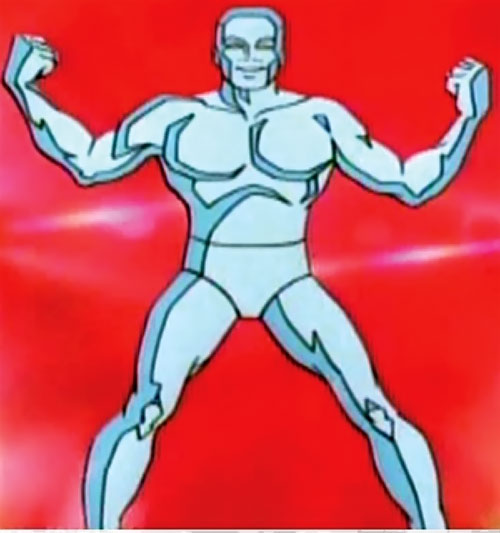 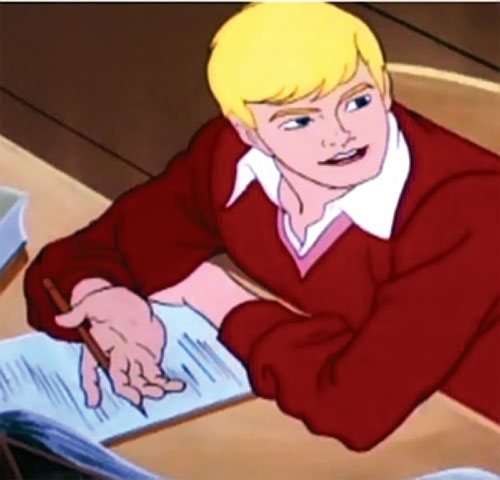 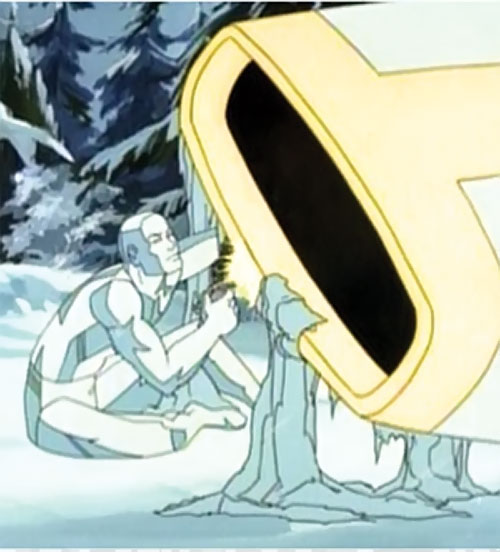 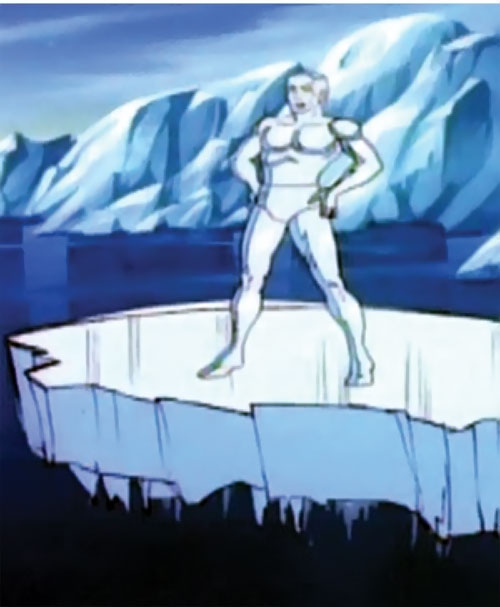