Icemaster has massive powers of heat negation. He is capable of putting an entire city in deep-freeze. His touch emits “life-stealing cold”, and he is capable of restructuring his arms into spikey clubs and the like.

Icemaster’s powers of ice generation are very similar to Iceman’s. Thus he can make his ice and himself highly resistant to heat. Or at least he could back in 1980 – whether he can still do that is unclear.

Since he’s either coated with or made of animated ice, he’s assumed to be superhumanly durable.

He appeared in the The Icemaster Cometh advertisement, which was in Avengers #191 and other books.

The Human Torch swoops down over a frozen city, which Icemaster had threatened to “put into a new Ice Age”. Confronting the villain, the Torch suffers the effects of his “life-stealing cold” touch, and flies away. He returns with Hostess™ Fruit Pies, which Icemaster of course, cannot resist.

The fruit filling warms his “heart of ice”, prompting the Torch to exclaim : “Things are warming up again, now that Icemaster has warmed to the goodness of Hostess™ Fruit Pies”. Mmmmm.

Amazingly, the Icemaster was back decades later, having joined the Crimson Cowl (Justine Hammer) version of the Masters of Evil. The plot was not unlike the Torch had thwarted – to use a powerful weather manipulation machine to blackmail countries into donating vast amounts of money.

However, Icemaster and the rest were thrashed by the Thunderbolts.

He’s got kind of an Old Man Winter thing going on. Spiky hair and a beard, with a long, pointed mustache and eyebrows, ice-blue skin, and long, pointed fingernails. He’s nekkid except for some blue trunks.

Icemaster wants to bring back the Ice Age, with himself as the undisputed ruler. He created little ice-thrones for himself to sit on, etc., so he sees himself as someone to oversee a new ice-world.

He’s kind of flippant with his enemies.

“Hostess™ Fruit Pies ! All for me ? What crust ! So light, so tender. And I’m warming up to the real fruit filling.” 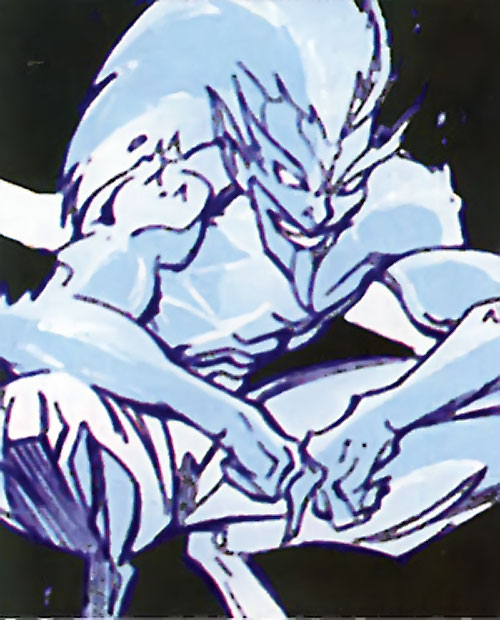 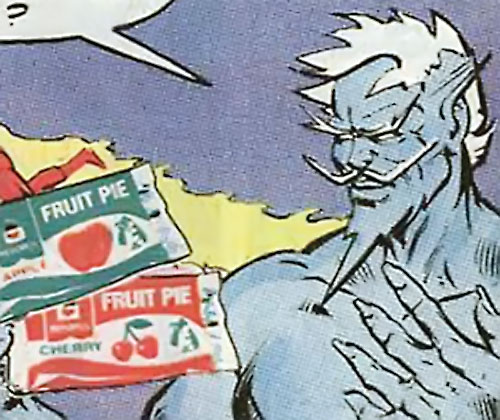