This is DC Comics’ Golden AgeSuper-hero comics from the late 1930s to the early 1950s Icicle.

He appeared in 1947 and is chiefly remembered as an enemy of Green Lantern Alan Scott.

Recent decades have featured stories that contradict prior Icicle tales. But we can’t tell whether those are continuity mistakes, retconsMaking changes to a character or story after the fact, Hypertime, Zero Hour  or a wombat.

We’ve thus stuck with the original version. Discrepancies — and proposed fixes — get discussed as they occur.

This character profile covers many decades. It is thus presented in two halves to avoid overlong reading (especially on smartphones). 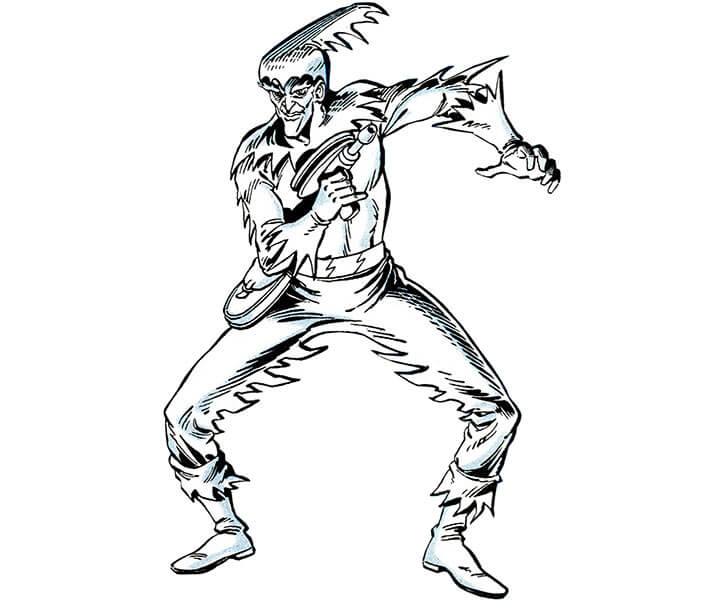 Dr. Makent is a superior physicist and engineer. His key invention is a “cold ray” technology.

The Icicle is neither a strong man nor an athletic one. But his reflexes are startling, and he excels at sudden bursts of speed.

He’s also an excellent shooter with his special gun. Though admittedly the wide beam makes it hard to miss.

The Icicle wears a distinctive white costume that insulates him from cold.

The soles allow him to run on ice without slipping. Their gripping power makes it possible to confidently run on precarious structures. Such as narrow, steep ice bridges between tall buildings.

Joar and the cold gun

Makent’s “cold ray” technology makes cold behave like radiant energy – rather than an absence of heat.

The earliest designs of this futuristic handgun could only freeze existing humidity or water. In temperate climates, the Icicle could thus form ice sheets on the ground — provided there had been rainfall recently — but not in the air.

He often relied on jets of waters from fountains or fire hydrants to flash-freeze bridges and ramps into existence. Somehow, the water always formed just the right arc. 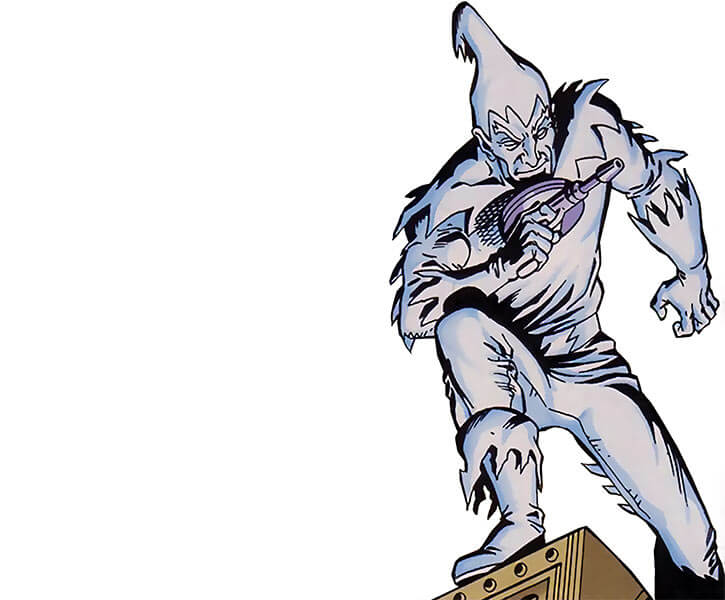 Joar and the cold gun (continued)

It also easily froze human beings. As usual in comics, frozen people could be harmlessly thawed back to life.

The weapon seemed to have a line-of-sight range.

Later generations of the cold gun

By the 1960s, the cold ray handgun behaved more like Iceman (Robert Drake). It thus created volumes of ice out of proportion with available humidity.

Some flashbacks depict the Mk2 gun being used in the 1940s, for instance to form ice ramps. We’ll ignore those as a continuity mistake.

Joar Makent was likely born during the 1910s. Yet there was little apparent ageing until 1984 or so. At this point a large chunk of his chronological age suddenly caught up with him.

And because they sound very 1940s. The racist trainwreck lyrics too are very 1940s – but well, I said it was era-appropriate.

Dr. Makent was a Norwegian physics genius. During the 1940s his “cold ray” invention made him famous.

In 1947 the celebrated physicist sailed to the US on the ocean liner Atlantania.

He was assigned a Secret Service agent, Lorna Dawn, for security. The US government feared that the “cold ray” in the wrong hands would become a devastating weapon.

The physicist felt poor and unappreciated. He craved wealth, respect, even fear. Thus, his plans in the US weren’t just about giving lectures. He wanted to become a super-villain, as you do.

As the Atlantania reached the harbour, notorious racketeer Lanky Leeds broke into the doctor’s cabin. Pistol in hand, he demanded the cold gun.

He and Makent struggled. The cold gun went off, stunning Leeds, Dawn and Makent. It also froze much of the Atlantania solid, in full view of crowds in New York City.

A villain is born

It had all been plotted beforehand. Leeds was but a catspaw. The Norwegian :

(From a later remark by Makent, it is possible that Leeds knew of the physicist’s original plan but intended to double-cross him. If so, Makent realised this and altered his plan to kill Leeds.)

Pretending to be Leeds and wielding his handgun, Makent was threatening Dawn when Green Lantern (Alan Scott) came in. 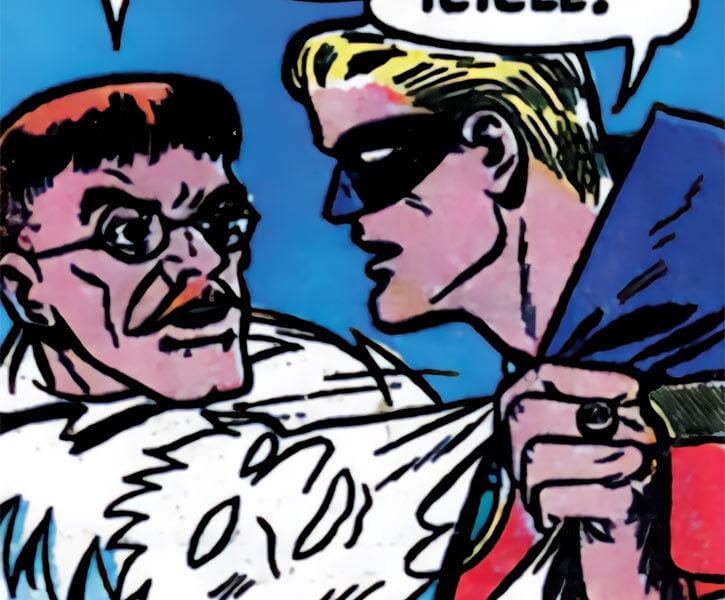 A 2001 caption describes Joar Makent as a victim of the “labour shortage” and the “prejudice of the time”.

It thus seems that in this version Makent is an American worker and not a Norwegian professor. We can’t tell whether this is a retcon or a mistake.

Our proposed approach to reconcile both accounts :

Makent-disguised-as-Leeds forced Dawn to knock Green Lantern out by surprise.

He then left with Leeds’ corpse and the captive agent, to rendezvous with criminal henchmen in a bad part of town.

Once there he threw Dawn into a convenient quicksand trap in the basement. However, she had discreetly slipped a message to Green Lantern after knocking him out.

The coldest criminal in history

Using the prepared costumes and the cold ray, Makent soon struck with his gang.

Green Lantern came in as they robbed a gems expo. But the masked Icicle stunned the emerald-clad avenger and fled with his men.

After investigating Dawn’s message, Green Lantern took down Icicle’s thugs. But Makent paralysed him with his cold ray and threw him into the quicksand pit.

Scott and Dawn escaped, and Green Lantern confronted the Icicle anew. After feigning paralysis from the cold, Green Lantern defeated and unmasked his foe.

A leap of sorrow

However, Makent then made an incredible leap off the 20-story building and into the river. Green Lantern assumed that the fall and freezing water had killed the Icicle.

But Icicle’s insulated costume allowed him to survive.

He was then reportedly helped out of the water by the demonic Johnny Sorrow. Sorrow had sensed that the Icicle — or one of his descendants — would be useful to him decades later. 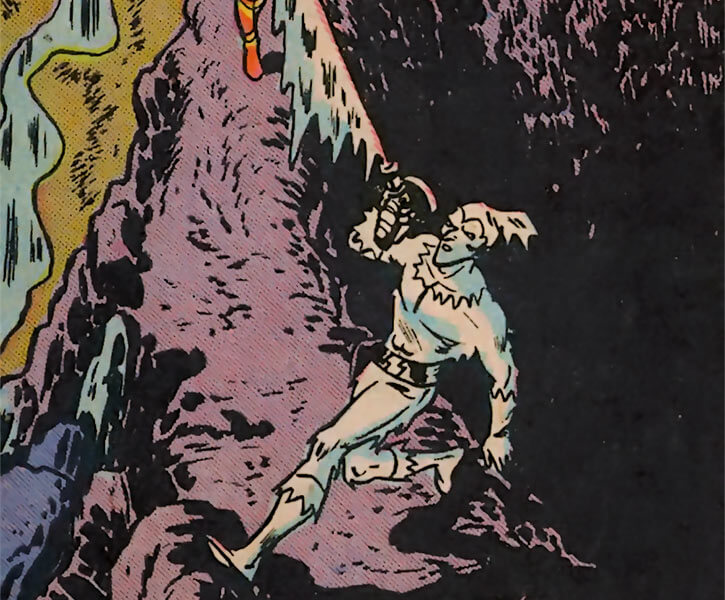 Within weeks the Icicle resurfaced in Latin America. He had been hired to support a coup attempt.

The cold-blooded Makent fully expected to be double-crossed by the rebels. But his actual plan was to steal the national gold reserve.

(Said country was fictional “Penumbria”, chiefly populated by racist clichés. But the story was probably inspired by the then-recent civil war in Paraguay  .)

Icicle’s employer wanted him to cause chaos – so his troops could march freely on the capital. Thus, the criminal physicist disrupted the city’s weather.

He then kidnapped radio engineer Alan Scott in the US, to force him to jam communications in Penumbria.

When Green Lantern intervened, the Icicle knocked him out. He then left him tied onto the rim of a volcano that was about to erupt.

However, the green gladiator was saved by his friends Doiby Dickles and Lorna Dawn.

By this point, Icicle’s employers had turned against him. But they were promptly frozen solid by the prepared Makent.

Icicle then attacked the gold reserve from a plane. He froze the river under the building. This formed an iceberg that burst through the ground, with the reserve trapped atop.

However, Green Lantern deflected the volcanic eruption. He then stopped Icicle as he was flying away with the gold. 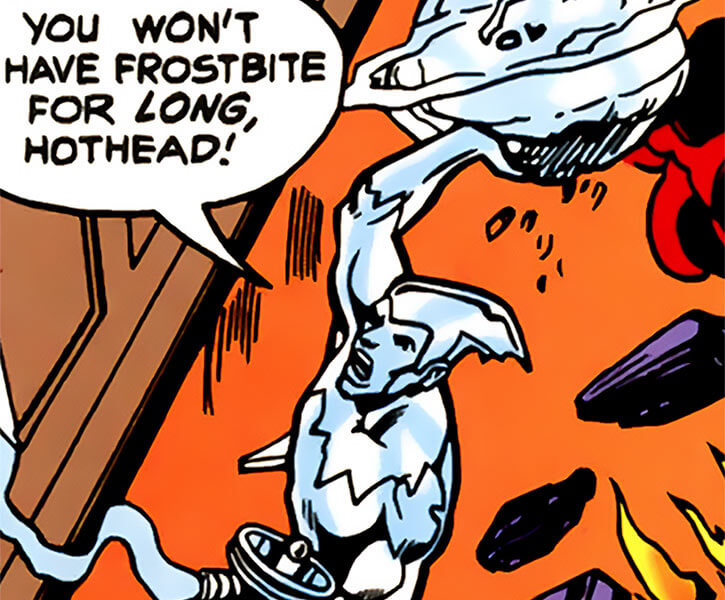 A 1998 Challengers of the Unknown issue depicts Icicle as being active in 1945. He clashes with Green Lantern (Alan Scott) during a riot in Gotham City.

Since Icicle debuted in 1947, this is impossible.

However, moving the incident to, say, 1949 would be trivial. It could be Gotham’s equivalent of the Peekskill Riot  . Rather than racist riots against minority Gothamites who hadn’t been drafted.

It is unfortunately not uncommon for post-demobilisation DC Universe characters to be featured as WW2 characters in modern flashbacks. Frex, it also happened to Icicle’s colleague the Sportsmaster.

Thus, it is possible that there was a wartime Icicle-like villain – whose motif and powers inspired Dr. Makent. 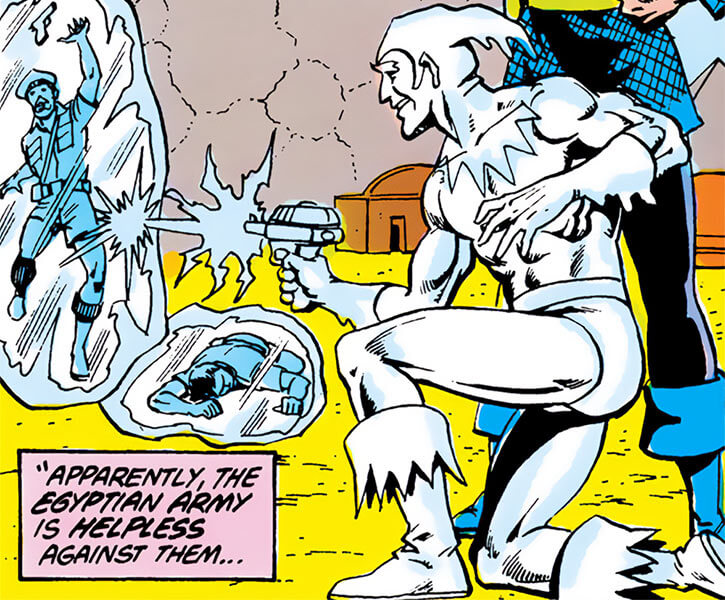 Six months later, Icicle was a member of the Injustice Society of the World. That was the 1948 roster led by the Wizard, who presumably rescued him from prison.

Beside the Wizard and Icicle, the roster was :

They decided to compete by committing grandiose crimes to steal national symbols of the United States. The Wizard also hypnotised the Justice Society of America to prevent them from interfering.

As they prepared, the villains realised that Harlequin was a double agent. Icicle captured her and the Black Canary.

Makent then stole the Super Ram-Jet Engine from the US military – a sort of heavy-duty dirigible. He flew it to Washington, caught the Monument  in steel cables, then simply flew off with it.

Green Lantern intercepted him and defeated him. But the Icicle used the post-hypnotic suggestion implanted by the Wizard. It forced Green Lantern to obey his commands.

Thus, the theft of the Washington Monument was a success.

The Icicle then used his new airship to steal an entire stadium. That was because the Injustice Society needed a large public to vote for which of their crimes was the most impressive.

However, during the vote, the JSA and the public broke free. They took down the Injustice Society. Makent’s gun was destroyed by the Flash (Jay Garrick).

Icicle was then active in Opal City, clashing with Starman (Ted Knight).

And at least once in Metropolis, where he fought his old foe Green Lantern Alan Scott.

Little is known about these incidents.

The Injustice Society was sporadically active during the following decades, with the Icicle as a member. Whether Makent was active outside of that team is unrevealed. Later comments imply that these villains spent much of the 1950s and 1960s in prison.

In 1954 Icicle, the Gambler and the Fiddler attempted to eliminate Starman (Ted Knight) in Opal City to have free rein.

They challenged him to a fight, but it was rigged. There were snipers hidden on rooftops.

The plan would presumably have worked. But Starman received unexpected help. The Jester (Charles Lane) fought at his side. And two criminals (Jake “Bobo” Benetti and the Shade), who had objected to the plot, took out the snipers in the nick of time. 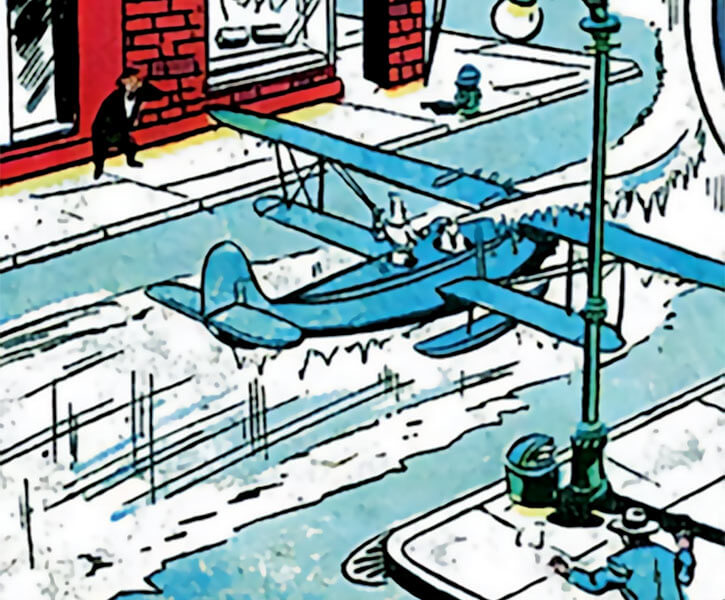 This profile is continued in the second part.

It covers the Silver Age and Modern Age, the characterisation, the stats, etc..

Helper(s): Darci ; the stats in Mayfair’s World At War, by Mr. Ray Winninger.