If you haven’t read the Gangs of Steel Harbor profile, then know that it has all the necessary explanations.

Ignition was pyrokinetic , able to make things and people catch fire just by watching them. He was also routinely accompanied by several armed Prime Movers gangsters.

He was less than rational, though his unpredictability could occasionally be an asset.

Ignition was apparently the weakest, least controlled, most insane member of the Prime Movers coalition. He was arrested at least once, but jumped bail.

Mace Blitzkrieg then ordered him to go on a rampage. The goal was to focus the attention of the police, media and fire department on Ignition, leaving Mace free to prepare his big plot.

Ignition’s rampage was cut short after 3 days, when he was taken down in seconds by bounty hunter Barb Wire.

Mack was soon thrown back into jail. However, it didn’t take long for the lawyer working for Mace Blitzkrieg, one Mesmerisation Eclipse, to get him freed. 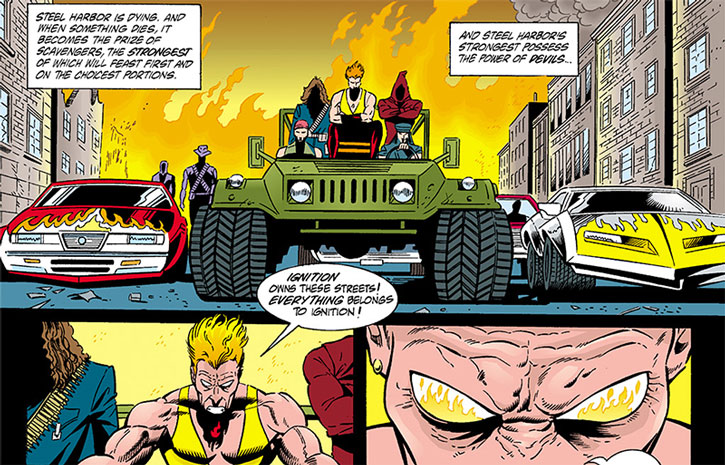 Though Eclipse ordered him to forget about Wire and keep with the plan, the irrational Ignition craved revenge. He ran into Barb Wire and one of her allies, the Machine, but was repulsed. Several members of his entourage were shot dead.

When Ignition came to report to his boss, Mace was furious. Threatened, Ignition stupidly tried to set MAce on fire. That was the last straw and Mace lobbed Ignition through a brick wall, putting Mack into a coma.

Mack’s girlfriend, one Maureen Skach, was about as deranged as her lover. During one of her numerous visits in Mack’s hospital room, she spotted Barb Wire leaving. Hysterically assuming that the comatose Mack was having an affair with Barb Wire, Skach broke Mack’s neck. She then became the second Ignition and took over Mack’s gang.

Ignition saw himself as a wasteland warlord from a bad Mad Max movie clone. In his head, he was free to take and burn whatever he desired. He seemed brain-damaged to some extend, and always talked about himself using the third person.

He was irrational and had psychiatric issues. Ignition could be counted on to take impulsive, self-centred actionss without any concern for the long term. Or even the medium term – he was all about instant gratification.

“Ignition knows who you are ! You’re gonna burn !”

Equipment:
Ignition prefered to operate from some sort of military-themed monster truck [BODY 07 STR 06, Running: 06, R#2] with about 4 members of his entourage. Note that it’s an open-topped ATV, not providing cover. There’s usually a tacky throne built on it for Ignition to sit in. 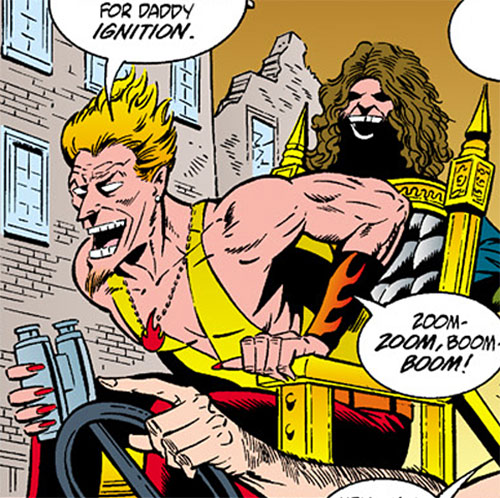 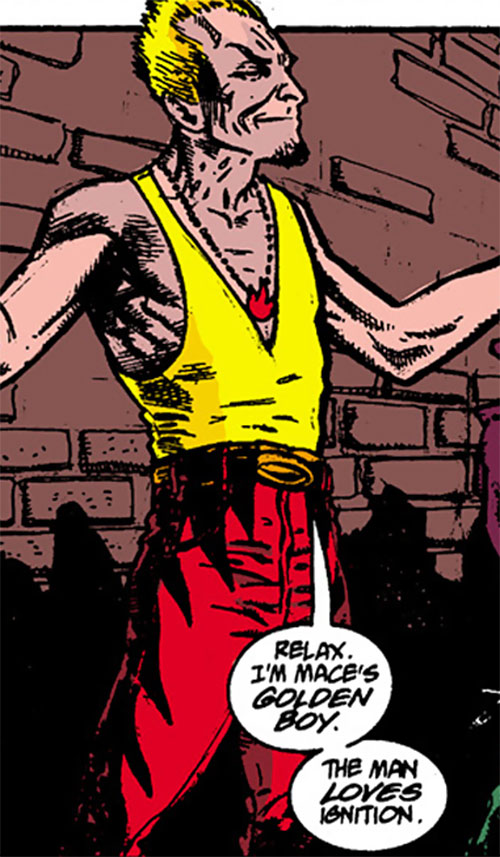