Unbeatable (Imbattable) first appeared in French comics magazine Spirou. It started being collected as hardbacks in 2017.

They are done by Pascal Jousselin, with Laurence Croix on colours.

The tagline is “The Only True Comics Super-Hero”. This refers to Unbeatable’s super-power – being aware of, and manipulating the fact that he’s in a comic book. He can hop from panel to panel in any order.

This gag was used a fair bit in the 1970s by admired French comics authors, such as Gotlib in the Rubrique-à-brac and Fred in Philémon. But enough time passed that it felt fresh again in the 2010s.

As I randomly realised whilst writing, these *are* translated in English as of 2020. By a small publisher called Magnetic Press  , whose catalogue of translations (plus some originals) looks pretty neat.

Their translation of Imbattable is called Mister Invincible.

This here article only covers the first GN, titled Justice and Fresh Produce. Since I don’t have the second one, Friendly Neighbourhood Hero.

(This profile uses my own translations, since I found out about the Magnetic Press version a bit too late.)

Unbeatable can see the page he’s on, and move between panels. His usual range seems to be one panel upward, downward or sideway. But when he’s in a new panel he can look around and move again.

He can also have objects move from panel to panel. For instance, if he shoots a less-than-lethal pistol upward, it will hit what’s in the panel above him. Which, from the point of view of those in this panel, means that the shot came from the future.

From the other characters’ point of view, Unbeatable is performing incomprehensible space-time manipulations. But for the reader, and for Unbeatable himself, what’s going on is obvious since it’s seen on the page, past the fourth wall  .

Here’s one early page, showing a simple use of his power. 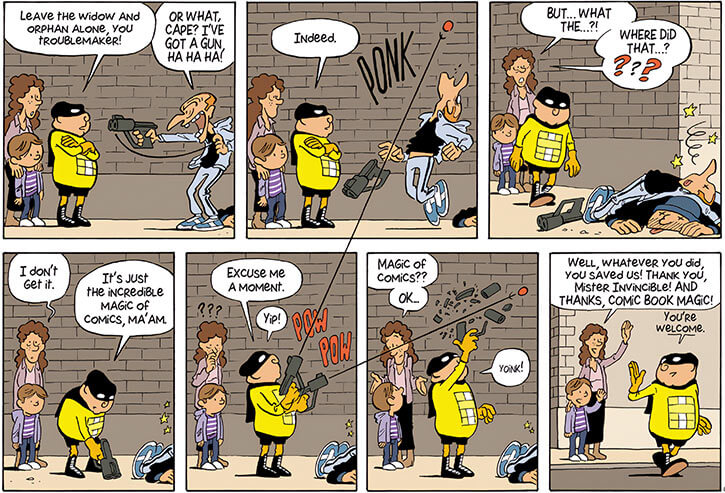 A basic effect is teleportation and remote sensing. By stepping from panel to panel, or by looking into another panel.

Since time passes from panel to panel, Unbeatable also time travels. Normally he can go into the past by climbing into the panel above, and into the future by climbing down.

Unless of course he’s in the last row of panels, in which case he can’t travel into the future until the next page.

Unbeatable can team up with himself, by stepping into a panel he’s already in. He can also communicate with his future or past self. For instance :

This ability is once used to empty the content of a large swimming pool into the panel under it. So the place Unbeatable is in is suddenly flooded by water from a remote location in the near-past.

Unbeatable once becomes virus-sized. By leaping into a panel that’s a close-up of an evil science virus. 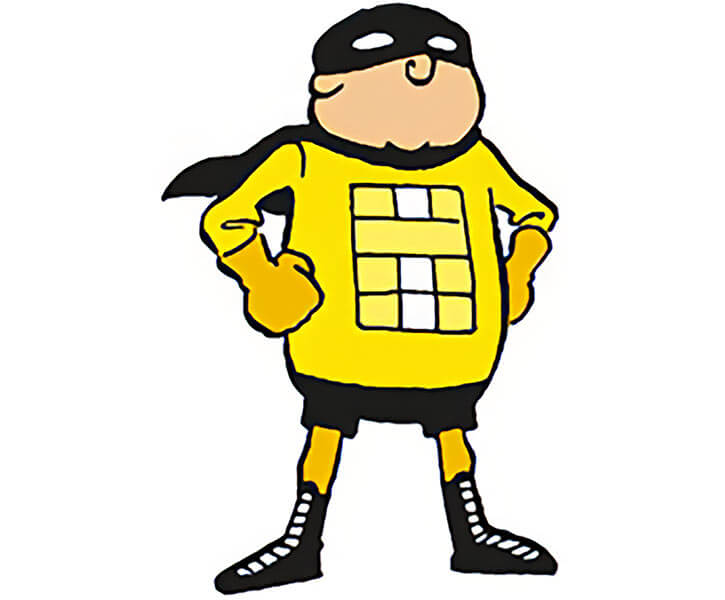 Unbeatable is keenly aware of how comics work. For instance, if he calls someone on the phone, he knows they’re going to appear on the next panel to answer their phone. Which means he can teleport next to them by stepping into that panel.

Unbeatable once has an ally read from a book about the Arctic. Because this’ll inevitably trigger an educational, illustrated sequence about the Arctic in the next few panels, with his ally’s words appearing in captions.

Unbeatable even asks for his ally to read slower. So the sequence will last the right number of panels to allow for space-time manipulation.

He can also intuitively understand how other super-powers work. Since in Imbattable stories, all powers are based on manipulating comics as a medium.

For instance, when facing a strange teleporting enemy, Unbeatable eventually intuits that this person is travelling *through* the pages.

He can even predict where they’ll reappear. Unbeatable can perceive that they stepped out in the middle panel of the third row in the previous page. And thus will reappear in the same location on the other side of the page.

However, he cannot see word balloons. He thus had no defences against another character who used these as concussive weapons.

Though he doesn’t look like much, Unbeatable seems to be unusually robust. He could even wrestle a polar bear… to a small degree.

Unbeatable can hit improbably hard with everyday objects, such as a broom stick jabbed at something in a nearby panel.

He also seems dextrous, and with excellent hand-eye coordination. 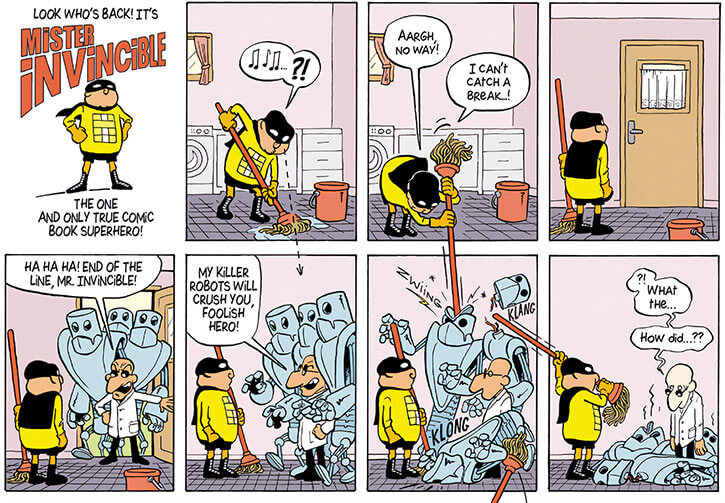 His entire life seems to revolve around banal tasks. Such as cooking, buying produce at the market, cleaning his kitchen, buying a baguette, gardening, mowing his lawn, cleaning the windows, visiting his grandmother, etc..

Unbeatable never takes off his costume, and all the locals know about him. But apparently, having a mask means that his true identity can never be discovered, because comics.

Somehow, he needs no income to live.

He cannot be beaten !

Some of Unbeatable’s “adventures” are extremely small-scale. Such as rescuing a kitten from a tree. Or sending himself a message from the future to buy a baguette on the way to his granny’s house because she ran out of bread.

Others are just tiny. Such as the dishonest Mayor wanting to install an electronic billboard on the plaza. Or the CEO of a hard-pollutin’ corporation wanting to hire Unbeatable as a figurehead.

And some are typical Golden Age of Comics fare. Such as :

Unbeatable stumbles upon many of these cases. The rest of the time, his law enforcement friends at the gendarmerie call him.

The gendarmes eventually convinced Unbeatable to get a cell phone so they can reach him more quickly.

The small town has its own mad scientist, simply called Mad Scientist. He’s very much like the Captain Marvel (Billy Batson) villain Sivana, and considers himself Unbeatable’s nemesis.

A teenage boy once apprenticed with Unbeatable. He goes by “2D Boy, the x-y boy who laughs at the z”. So people usually call him “Toodee”. The lad’s power is based on perspective. The chief application is to interact with objects who are further back in the panel, which makes them much smaller.

Unbeatable also dealt with the Jokester, who could travel through the comic’s pages.

A short and slightly rotund man. Unbeatable *always* has his costume on.

His chest emblem only makes sense when you realise that it’s the panels grid of a typical page. To my regret it’s always the same pattern – it doesn’t depict the layout of the page he’s on. 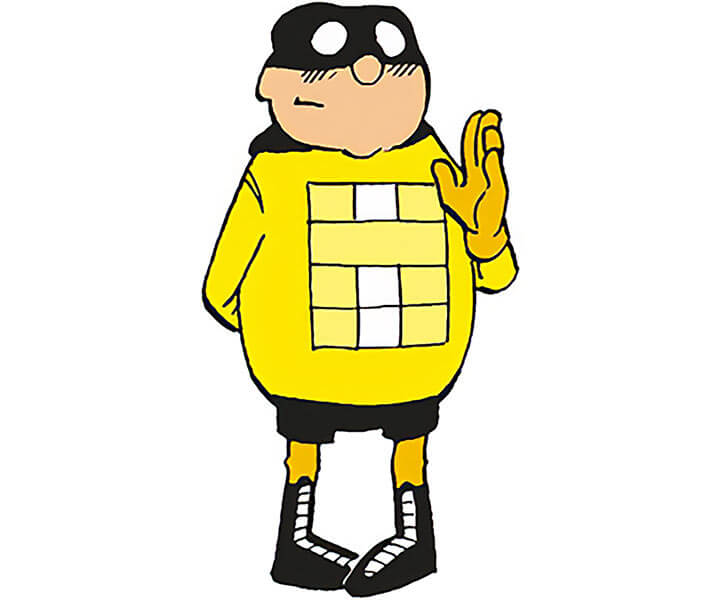 Unbeatable is a proper and helpful citizen.

He lives in the world that the Golden AgeSuper-hero comics from the late 1930s to the early 1950s imagined itself to be, with helpful authorities and an atmosphere of civic spirit. Villains are bad and must be jailed, nobody ever gets seriously hurt, and Unbeatable knows he’s almost invincible.

His lines are trite 1940s-style declarations about heroism. He’s just that much of a goody-two-shoes.

He’s a calm, fairly intelligent man. But he’s a bit puzzled that other persons aren’t genre-aware like he is. And thus do not understand what he’s doing and some of what he’s saying. It sometimes mildly frustrates him.

He’s also perplexed by Mad Scientist not getting that Unbeatable is unbeatable.

Every Sunday, Unbeatable has lunch with his gran.

“Unbeatable to the rescue !”

“You already lost. Past me already will have cleaned your clock.” 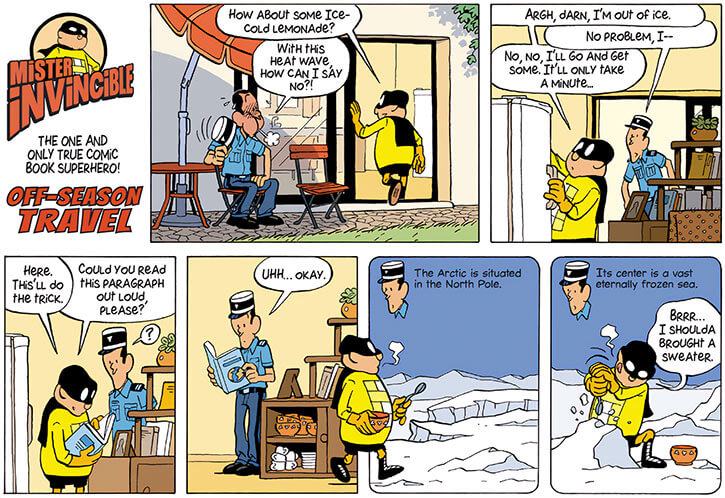 Unbeatable has a secret pocket in his costume. He normally carries stuff that Captain Jean-Pierre of the Gendarmerie gave him – handcuffs to make arrests, and a cell phone.