A highly talented pilot, Chen Nuo’s natural ability has been enhanced by his link with the Dragonwing. The Dragonwing is the most advanced fighter plane in the world, one of a fleet of ten designed using technology from a crashed Durlan ship.

Partially alive, it forms a symbiotic relationship with the pilot, which gradually breaks down the human molecular structure, and drains a year from their life for every time they fly with it, leading to a program which keeps a small crew of replacements trained to take over at a moment’s notice. 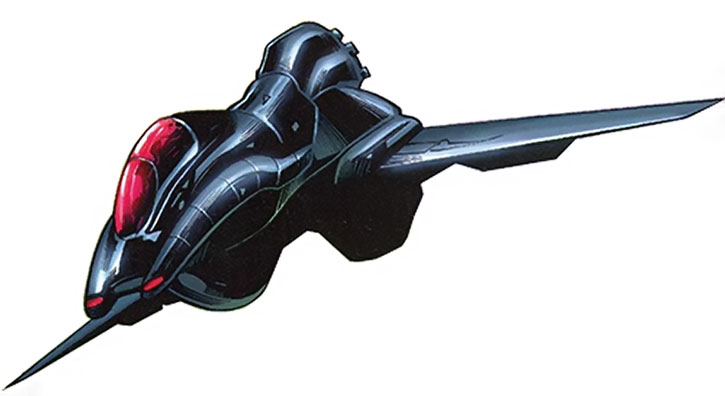 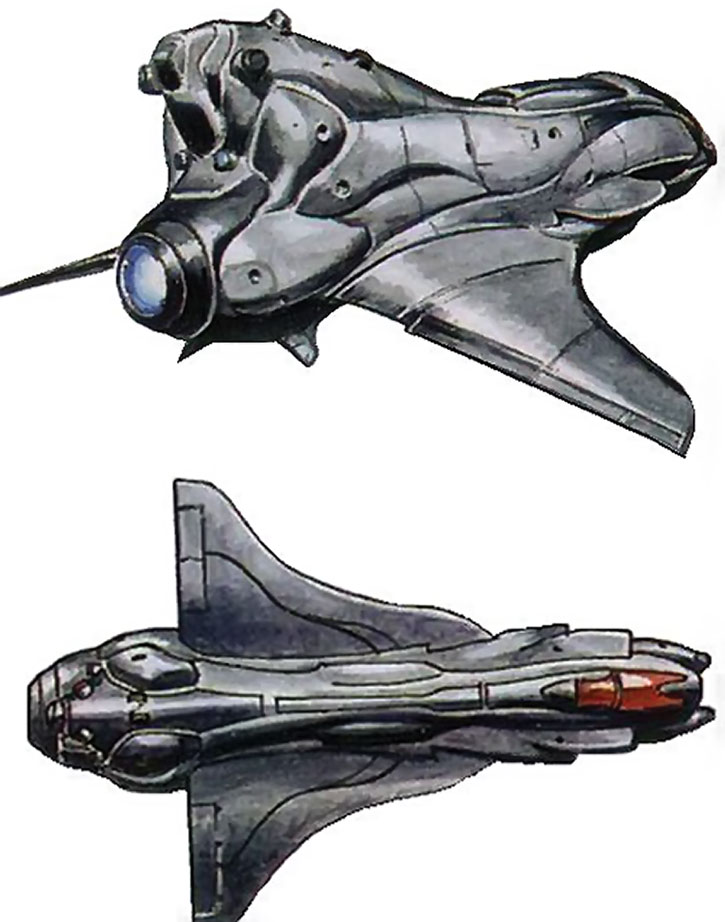 The Dragonwing’s offensive capabilities include energy blasts of an unknown type, projectiles, and tentacles formed from the planes body. In extreme conditions, the pilot may also call up the other 9 Dragonwings, controlling all of them in combat.

Graduating top of his class from flight school, and acing special ops training, First Lieutenant Chen Nuo was invited to Anshan airbase, near Shanghai, to meet the renowned Immortal Man-in-Darkness, pilot of the Dragonwing. There he was told the truth of the Dragonwing, a living craft derived from Durlan technology. 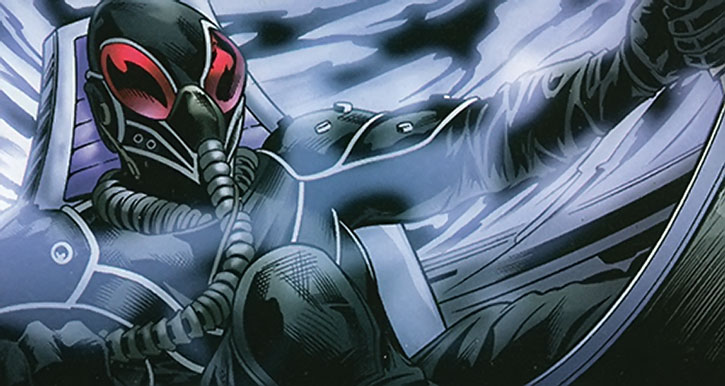 Each flight took a year off the pilots lifespan, and three pilots had already died during the five years the plane had been in use. Nuo was invited to join the squadron of Immortal Men-in-Darkness, quickly accepting.

Nuo’s turn came soon enough, and he donned the uniform of the Immortal Man-in-Darkness, taking his place on the Great Ten.

Devoted to flying, Nuo put his career before everything, and dreamt of one day piloting the fabled Dragonwing. Even learning the cost of doing so, he barely hesitated in accepting the role. A loyal soldier, he’ll do whatever is necessary to accomplish his mission, even if it means friendly casualties.

He also has little compunction about entering dangerous situations, apart from endangering the Dragonwing, since he’s already sacrificed a good portion of his life to serve his country, and expects to be dead within the year. 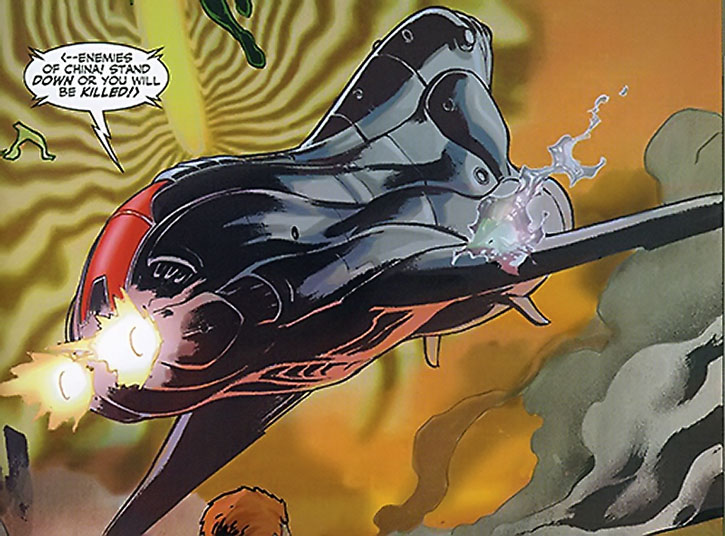 Seeming an unquestioning hard liner to some of the Ten, his only real interest is in flying, so as long as the Party let him continue, he’ll happily follow whatever orders he’s given.

He doesn’t seem to socialize much with the rest of the Ten, and indeed is unlikely to be the first Immortal Man-in-Darkness they’ve served alongside. His closest relationship may actually be with the Dragonwing itself.

“Immortal-Man-in-Darkness to August General in Iron. I have Green Lantern point one in my sights. Requesting permission per codex six-six-three to take him out of the sky.”

“Enemies of China ! Stand down or you will be killed.”

“I am the Immortal Man-in-Darkness. I do not believe in prayer. I believe in speed, and stealth, and bullets.” 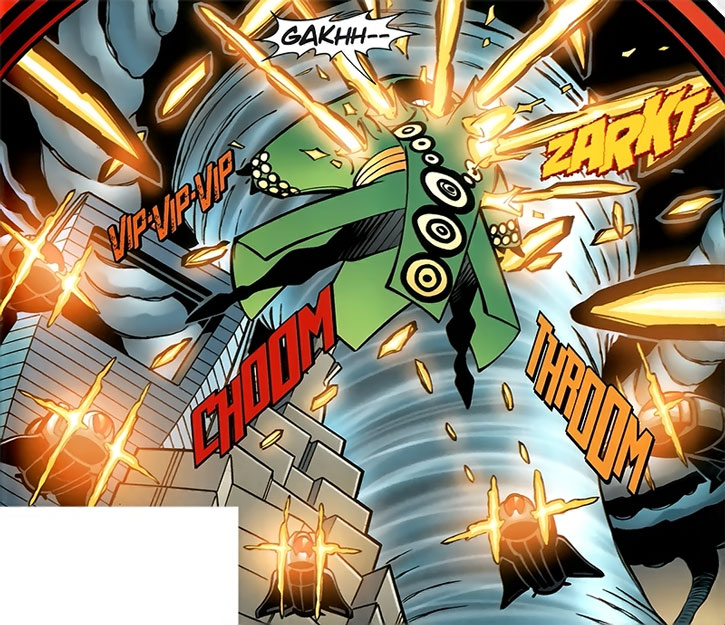 “Nothing good is ever achieved without sacrifice. I am living proof of that.”

“No collateral deaths. Good, though if I had to go through a dozen Shanghainese to finish this enemy of the people, I would have.”

Bonuses and Limitations:
Vehicles (Air) is Specialised in piloting the Dragonwing.

Drawbacks:
Dark Secret (Use of Durlan technology is banned by international law). 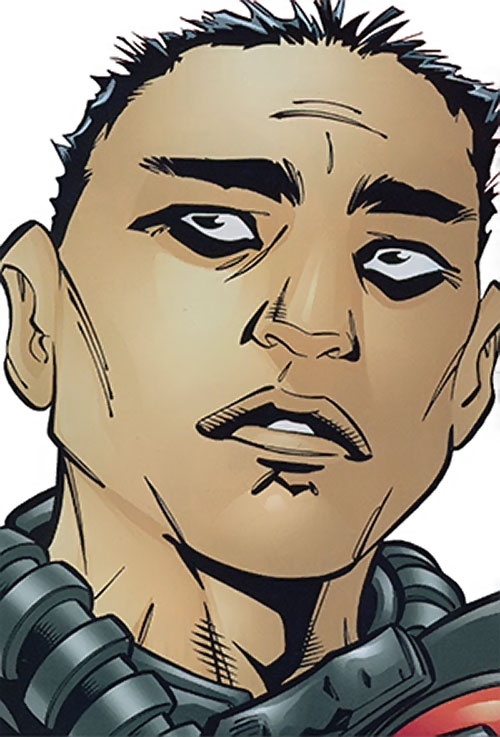 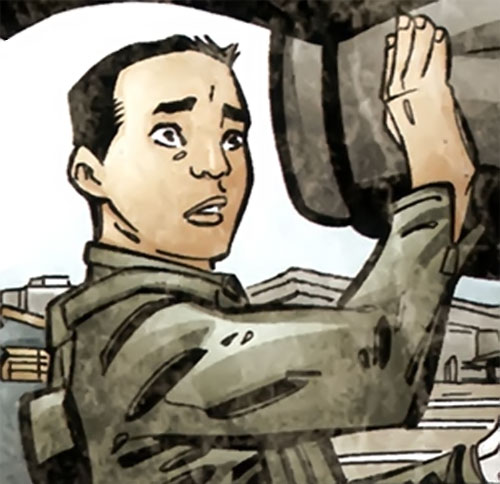 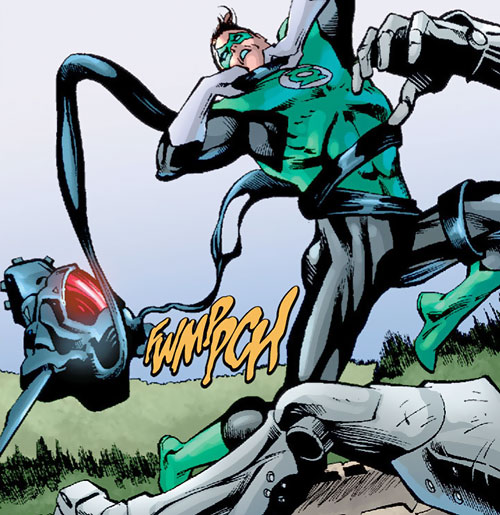 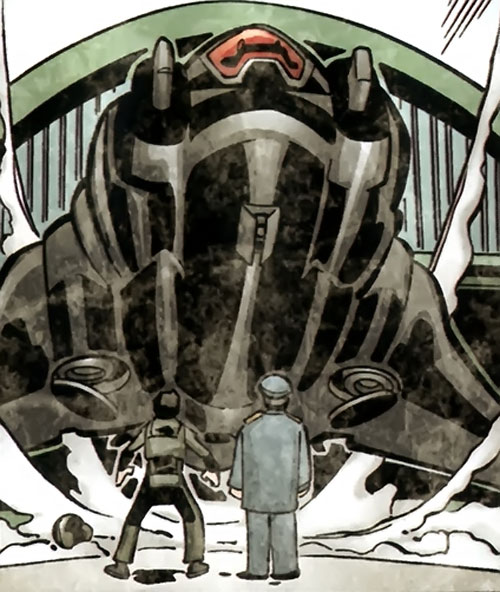 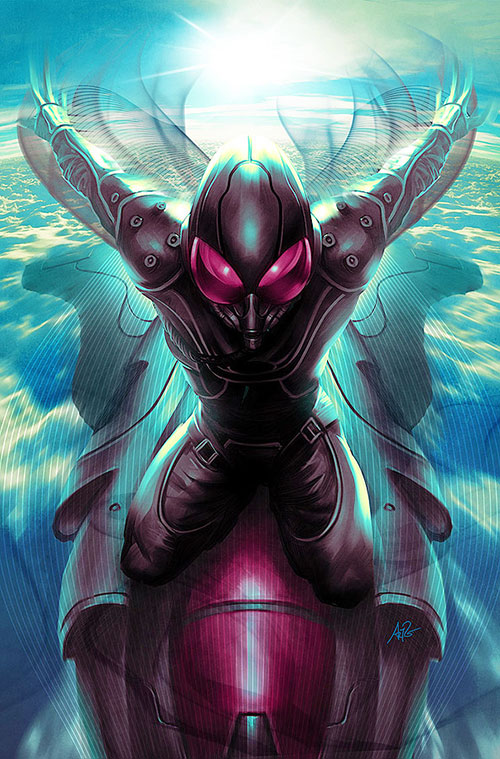