Imoen (pronounced Eh-moh-enn) is a companion in the classic Baldur’s Gate video game, based on Dungeons & Dragon and released in 1998.

This profile, she’s got S P O I L E R S. Howbeit, due to time constraints, our BG companion profiles only cover them up to level 5 for now.

She leveraged her light, accurate touch (and her boredom) to become a stealth expert, fast-talker and flyweight armed fighter. Though technically she comes a good 15 or 20 lbs. short of being a flyweight.

Though she obviously lacks in strength, Imoen packs a remarkable amount of endurance and pain tolerance in her slight frame. She’s a dogged fighter and adventurer.

Imoen is usually armed with a shortsword and a short bow.

She also has the typical D&D “thief” skills for stealth, B&E, surprise attacks and traps detection and management.

Using the spellbook of a mage-assassin, Imoen taught herself how to badly cast a few cantripsIn D&D parlance, a casual spell that does something minor.. These are too minor and unreliable to have a game presence, though. At best they might be party tricks.

But that she can cast them in the first place, through independent study, is a clear mark of talent for magic.

Imoen soon obtains reluctant instruction from a professional (in this playthrough, Dynaheir). But of course this is a long-term pursuit. 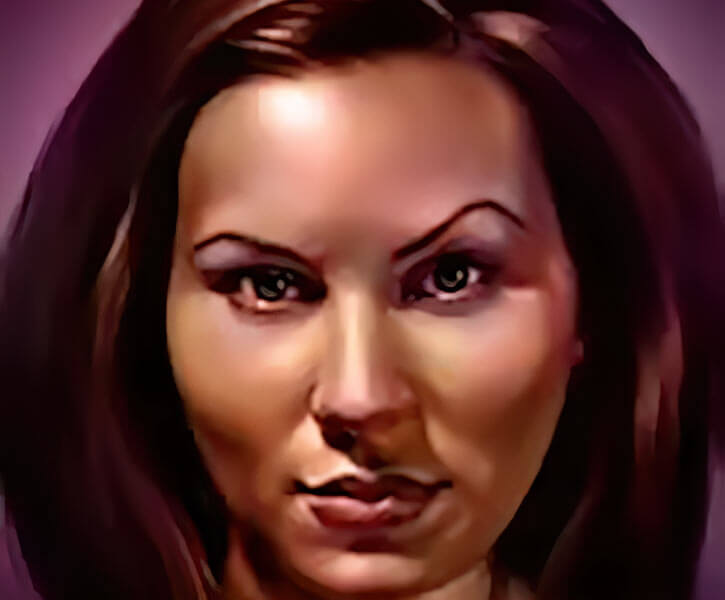 The sage Gorion found the orphaned Imoen when she was ten. He brought her to the Candlekeep fortress as his second ward.

Gorion said even less about Imoen’s past than about CHARNAME’s. And Imoen’s first memories are of Candlekeep.

Since “Mister G.” didn’t have much time to care for Imoen, she largely grew up at the Candlekeep Inn. The innkeeper Mr. Winthrop took a liking to her and treated her right. However, there were many chores to do to help run the tavern and earn her keep.

Thus, Imoen’s adoptive father figure is Winthrop, who raised her, rather than Gorion.

Unbeknownst to all, the genial and welcoming innkeep Winthrop had a shady past. Though that part of his life was over, Imoen badgered him into teaching her his old tricks. “Puffguts”, as she nicknamed him, trained her well – if reluctantly.

Imoen stole quite a few things in Candlekeep and was up to general mischief, but she was never caught for that. She’d pickpocket monks and travellers, though she normally stole but beer money.

Imoen sneaked out of Candlekeep and followed Gorion and CHARNAME as they hurriedly left. Thus, she espied the ambush that killed Gorion.

In the morning, she managed to find CHARNAME before they’d resume their travels. 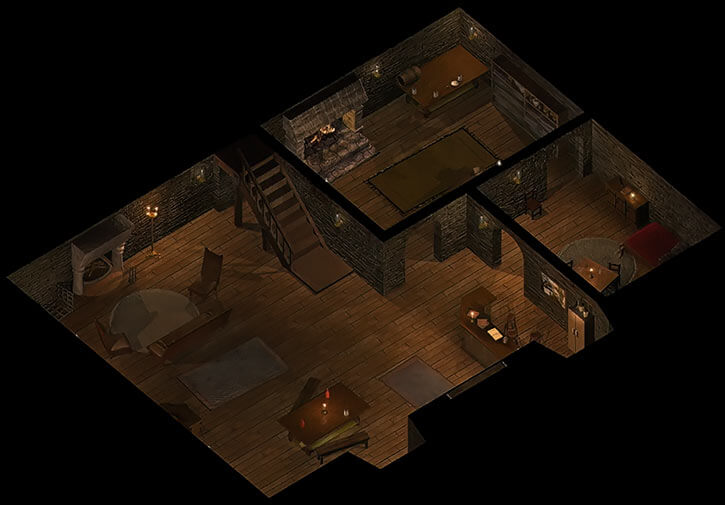 In this playthrough, part 1

In our sample playthrough, Imoen accompanies her sister Jet from the very beginning to the very end, whenever feasible.

After they get attacked by the mercenary mage Tarnesh  at the Friendly Arms Inn, Imoen spends much time poring over the dead assassin’s spellbook. She is driven to understand this stuff.

But, characteristically, she proceeds in a haphazard and unfocused fashion. As she attempts to show her sister her “prowess”, Imoen once manages to daze herself and enchant the spellbook with a small surge of wild magic.

In this playthrough, part 2

In Beregost  , Imoen goes on nightly expeditions to burglarize the richer houses. She sees this as ethically justified since her goal is to protect her sister by eventually buying her a suit of full plate armour (which costs more than 7,000 gold pieces).

A few days after Dynaheir is rescued from the gnolls, Imoen strongarms her into tutoring her in thaumaturgy. She does that by exploiting Dynaheir’s reluctance to be embarrassed.

She’s a redhead (well, auburn) with a naturally fair skin, but will eventually get a decent tan when spending time outdoors.

She has a girly, upbeat, nasal voice that also contributes to underestimating her age. Her voice actress is Melissa Disney  .

Imoen eventually finds cosmetics (or perhaps cantrips) to dye her hair a dull, reddish pink. She also grows fond of tying bits of her hair into small tresses, probably in imitation of Jaheira. If technology allowed for it, she undoubtedly would have bright pink hair.

More generally, it’s her favourite colour. Almost all her clothing is in some shade of pink.

In the Enhanced Edition of BG1, the portraits are those used in BG2. These apparently better reflect the character concepts.

In Imoen’s case, it seems that it raises minor continuity concerns: 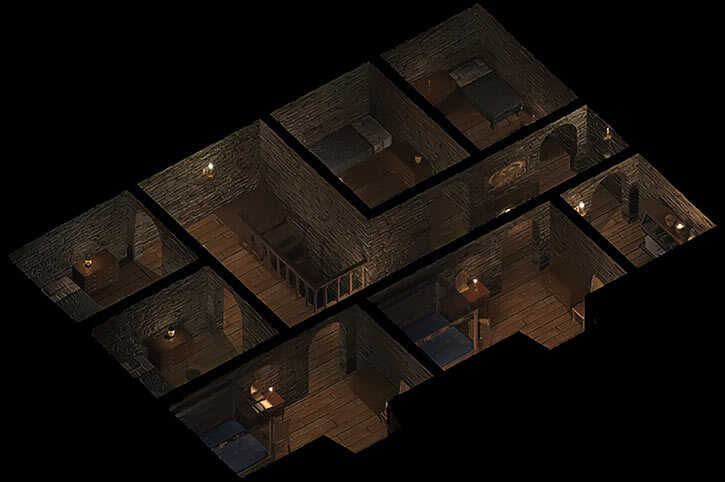 Rooms on the upper floor of the Candleep Inn.

She seems to consider herself the guardian of the good spirits of CHARNAME. After way too many years of boredom in Candlekeep, she’s excited to finally be out in the big wide world.

Imoen prefers to act cute and child-like. She doesn’t really mind that everybody underestimates her age. Even CHARNAME occasionally calls her “kid”, yet they’re the same age.

Not quite the cute little sister archetype

Imoen’s attention span isn’t the best, unless she’s genuinely interested in the subject at hand. Neither is her understanding of personal property.

She is also pushy and manipulative, and fond of monitoring and injecting herself into nearby conversations.

On the plus side she is ambitious… but that ambition clearly doesn’t come with a matching sense of responsibility.

She also has a tendency toward envy, and her definition of “unfair” suddenly becomes much more flexible when applied to her own actions.

Were the game more fully-featured, one could easily see Imoen sliding away from her Neutral Good alignment under the influence of an Evil version of CHARNAME.

In our sample playthrough, Imoen is reluctant to grow up in large part due to a procession of slimy rumours about her sex life. These started when she was but 11, an unusually early age for puberty in a low-tech milieu.

It also comes from the tension between being excited about discovering new things, and getting cold feet when it comes to actually making the leap.

Imoen is very close to her adoptive sister Jet, who’s also her bestie and… her only real friend. Imoen is physically much safer with the towering Jet around. In return she watches for those who would abuse Jet’s naïveté or gloominess.

Imoen particularly enjoys those moments when those who would bully and overbear her suddenly shrink and slink away as her sister comes in. It’s even more satisfying to her than personally beating back would-be abusers. 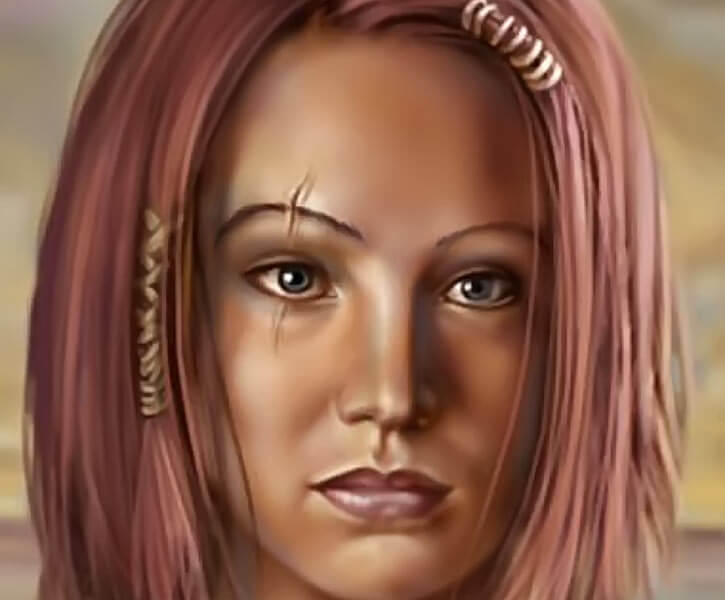 “Anyway, I’m not gonna let you wander around out here all alone. Never let my good sister down, no, ma’am ! Stick with you until you say otherwise, I will ! And beyond too !”

“We’ll get him, you know. That guy, whoever he was, who killed Mister G.. We’ll find out who he is, and pay him back good !”

(Excitedly brandishing her blade) “Yeah c’mon Jet let’s… raid a dragon’s lair and loot everything !” (pauses, looks at her sword’s edge with a frown) “Okay. We could fight a party of hobgoblins, I guess.” (looks up at Jet, looks again at her small sword, pouts) “Maybe a pair of xvarts   ?”

(Referring to her past career as a serving wench) “No more aprons and bonnets for Imoen the Magnificent !” 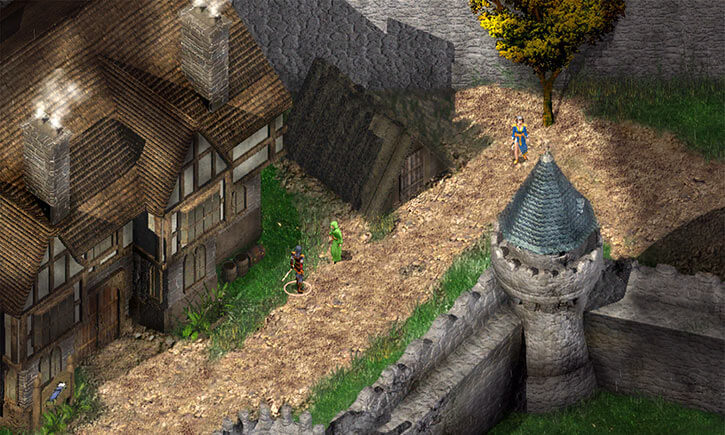 The inn, in Candlekeep’s outermost courtyard.

The artefact (and the tiny storyline with it) is an addition from the BG1NPC mod. Again – modded version of the game.

It has non-standard mechanics since the D&D effect is… modest, but I felt there should be *something* on her DCH sheet.

By Sébastien Andrivet the Sly.