There seems to be some confusion in the story about Zambia . In the book it is said to be a west African country, but it’s actually pretty firmly in the central South of the continent. This profile assumes that she’s from real-world Zambia and adjusts a few details accordingly.

As an incidental benefit, there actually are impalas  (video) in Zambia. By contrast finding one in Western African countries would be challenging. Unless you cheat and bring your own.

Impala is a powerful :

Being extremely agile, she favours an acrobatic style of combat with lots of leaps.

She carries sticks that are balanced for throwing (some have pointed tips) and for fighting. In melee she generally dual-wields .

Impala is reportedly a criminal with an history of fighting against Voortrekker and Coal Tiger.

Impala’s first documented appearance was as one of the numerous guests on a luxury cruise. This is where Superia made her pitch to create a modern-day version of the Femizons.

During the cruise, she was announced as being from Zambia.

The fiercest antelope of them all

During the cruise, she met and befriended the members of BAD Girls Inc. (Black Mamba, Asp and Diamondback). Impala further demonstrated her javelin-throwing skill during a pageant, and helped fight against the irruption of Captain America and Paladin on the ship. 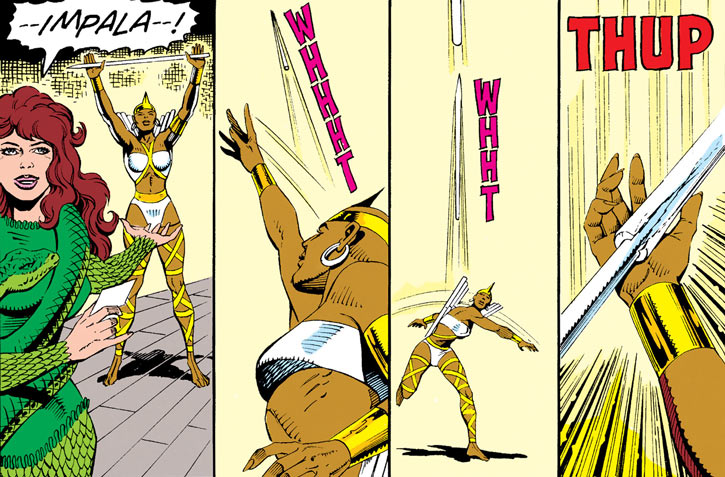 Eventually, the Femizons project fell apart. The women on the cruise dispersed.

A number of ex-Femizons met some time later in a super-villains bar in Manhattan. Asp and Black Mamba learning there was a bounty on their head; from Superia. And Battleaxe, Steel Vengeance and Golddigger intending to collect. Loving a good fight, Impala jumped in at the sides of Asp and Mamba to even the odds. This allowed Asp and Mamba to escape.

Catching up with them, Impala was invited by Mamba to join BAD Girls Inc.

Their first adventure together, the search for Snapdragon, did not start well. Their break-in into the old Serpent Society headquarters did not produce any information. Then they were casually stopped by the Avenger Sersi.

Black Mamba talked their way out of that bind. Then they flew to Europe since Snapdragon did not seem to be in the US. Impala’s suggestion that they confront Superia to get rid of the contract on their head. They could also ask her about Snapdragon was turned down by the other two.

The European adventures of the BAD Girls remain unchronicled.

Impala was briefly seen again with Mamba and Asp while they were touring the AIM weapons expo held at Boca Caliente. This was, however, Impala’s last documented appearance.

She likely struck out on her own. After all, her ambition and taste for danger were not… entirely shared by the other two.

Impala is unusually tall, unusually thin and unusually toned. She wears very little in the way of a costume, apparently to make other women jealous.

Impala is fun-loving and competitive, and fights for the pleasure of it. She is always ready to get into new wild adventures.

It is entirely possible that her crimes back in Africa are actually semi-heroic, or at least amoral, in nature. 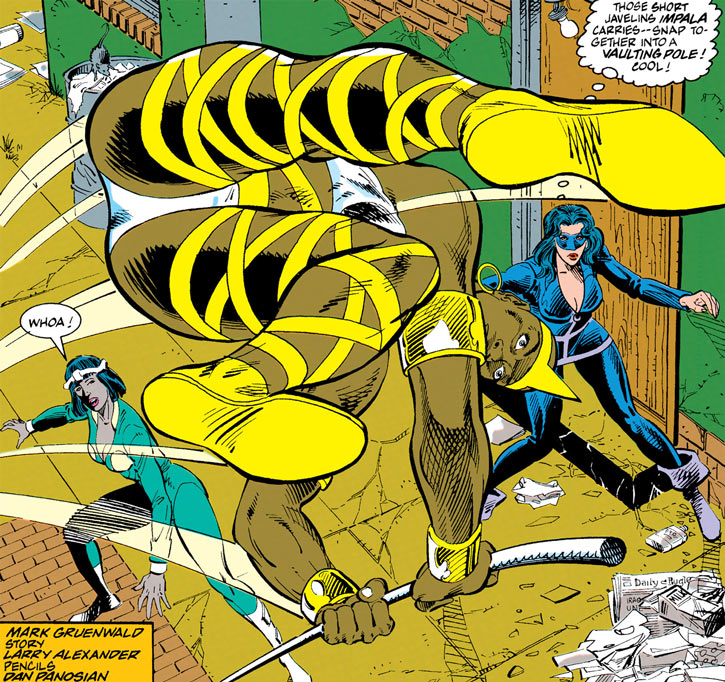 She enjoys flaunting her physique and making fun of female opponents with less ideal proportions.

Brash and forward, Impala seems fearless and has little hesitation in confronting foes more powerful then herself. She often crosses the boundaries of overconfidence.

“No, I joined the fight for the odds were uneven.”

(To the not even overweight Battleaxe) “You need not look far, obese one. I’m right here. I am Impala !”

“You move like an ox in the Summer drought !”

Mayhap a younger, rebellious relative of the Global Guardian of the same name. She left the BAD Girls and the mercenary life after his death at Roulette’s house. Then she joined the Ultramarine Corps instead of Kid Impala.

She might also replace Vixen in a few appearances. Because Vixen doesn’t deserve to be associated with so many debacles.

Equipment 2, Fearless, Languages 2 (one or more Bantu languages, such as Chibemba). 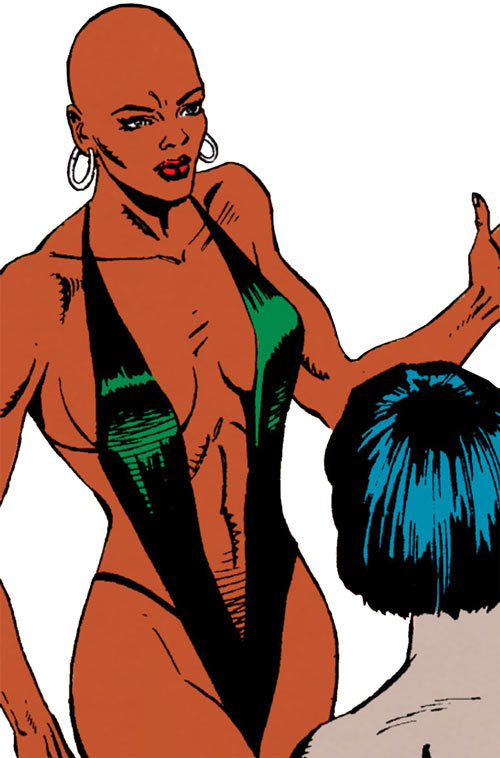 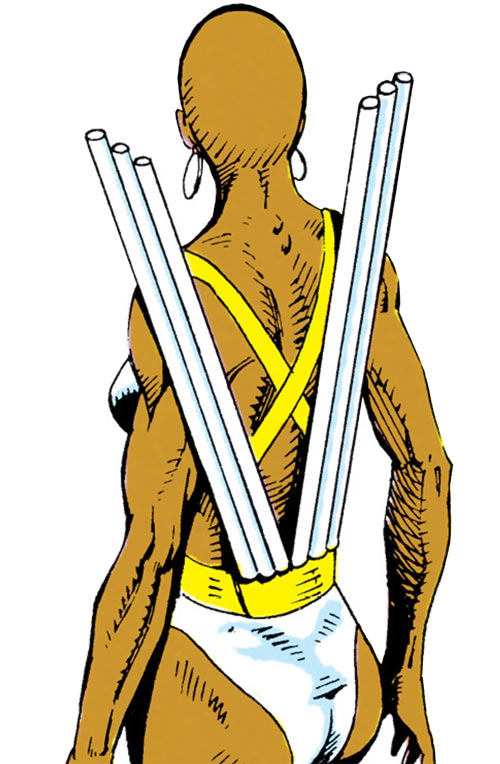