The sole ability to turn invisible.

He appeared in “The Power of Gold”, which was in Avengers #201 among other places.

Cruising in the Fantasti-Car, Mr. Fantastic declares, “The museum’s Centennial Exhibit of Gold is sure to attract the evil designs of Impercepto, that malevolent alien.”.

Knowing the invisible alien is somewhere about, Mr. Fantastic reaches his elastic limbs over the city, but can’t seem to get his hands on the little imp. “But wait… Impercepto’s DNA structure makes him materialize when he comes into contact with gold.” Look at the big brain on Reed !

Noting that, “A super hero can’t afford real gold these days” (could they EVER ?), Mr. Fantastic tosses down something just as good – Hostess™ Twinkies cakes. Impercepto can’t keep away, and becomes visible while munching on the spongy, golden snacks.

Reed wraps the li’l guy up with one of his arms, and that’s all she wrote for Impercepto.

He’s a red-skinned, little imp-like alien, with big pointed ears and antennae. He wears a green body-stocking with magenta colored gloves and little 50’s-style shoulder fins. He only has three fingers on each hand, and appears to have a long, worm-like body.

He likes gold a lot.

Bonuses and Limitations:
Misc: Vampirism can only be used on gold. 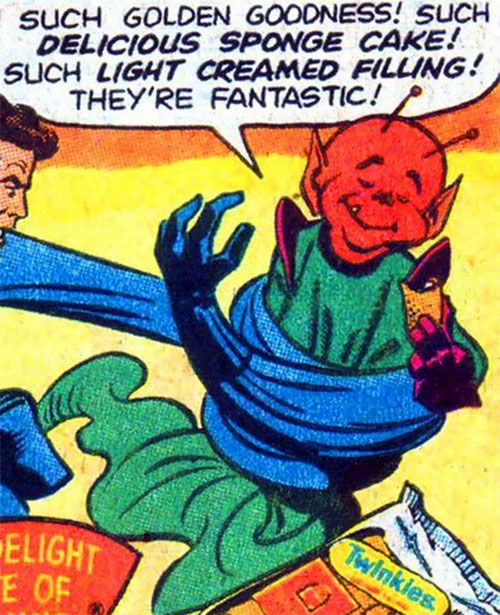