The Impossible Man is, for some reason, adept at handling technology. He very quickly figures out how to use new technology. He has been suspected of using teleporters and dimensional manipulators to supplement his powers at times. In such instances, he used his starship as a proxy.

After all his time on Earth, the Impossible Man also has an encyclopedic knowledge of various cultural figures, superbeings, aliens and themes.

Somehow he can make his voice be heard in deep space, possibly by telepathic means.

His jestery is generally not viewed as funny throughout the cosmos. The Impossible Man is often followed by an armada of alien ships intent on bringing justice for his insults. However, all in all the Impossible Man should be regarded as a very big threat. Even Galactus, who Impy has played tricks on and even impersonated, has said that he is almost as great a threat as the Phoenix herself.

Indeed, the Impossible Man appears to get more and more powerful with each appearance. How powerful is he? Well, let’s see.

The Impossible Man has the amazing power to turn into anything he imagines. This is not only limited to animals and humans, but any type of object is doable. This includes objects separated in space, such as a swarm of bees. He can also turn into objects ordinarily powered by fuel, electricity or other external energy sources.

Furthermore Impy can change his size to wary between that of an ant to a giant, up to Galactus’ size.

He can, furthermore, become functioning mechanical objects, such as a spinning buzzaw, a rocket-powered space ship (see below) or a bomb which actually explodes, only to immediately be restructured into something else desired.

He could also change his elemental composition to become, for example, a water-filled balloon or water cannon. Or indeed, the densest material in the universe (he once became 17 tons). He can, of course, stretch his limbs, which, in combination with shrinking, enables him to pass through nearly any obstacle.

He can also adjust to mimic some of the superhuman abilities that he sees or reads about. He has become Captain America’s indestructible shield and clobbered the Thing with Thor’s hammer. He has even impersonated Galactus himself many times.

His appearance is in no way limited in colors either and anything is possible. Those stories that claim so are in error. But sometimes he has had to wear makeup to appear human, and if this limited version of Impy is to be used, he should be given the limitation that he can only form green constructs.

Impy is so fond of changing his forms that he will often have a new form every few seconds in combat. He will often resemble objects commonly seen in cartoons.

He will often use his powers for defensive purposes, and has been trained to do on his dangerous homeworld. Yet he will resort to full offense only if the opponent is evil or is clearly trying to hurt him. As his powers work with the speed of thought, he is very fast and a tough opponent.

Lastly, the Impossible Man has so great a control over his molecules that he can easily create a clone of himself at any time. This is indeed how his race asexually reproduces. Such offspring, who most often are created as children, will think almost exactly like the original and share his personality in excellent synergy.

Although each Poppupian has his own unique personality, they all share a common mind. They thus draw their knowledge from a combined pool of perceptions. Clones will, as they reach the same conclusions and ideas at the same time, behave as if they were all a collective, hive mind, although they are each individuals.

Whenever Impy gets going he will regularly do the impossible !

The Impossible Man can, at will, change himself into a space ship. The space ship is propelled by the Impossible Man’s own chemical energy (in DC Heroes RPG terms, Flight). As soon as he has designed on a course, he will fall into stasis (Suspension), only guiding his route by his subconsciousness.

In this state his metabolic rate is severely reduced and he can survive several months without any air, food or water (Sealed Systems; Suspension). He will wake up automatically if he collides with something or as soon as he has reached his destination (Scholar (Astronavigation)).

In an atmosphere he will just tend to float around as a piece of paper or a balloon until something interesting (i.e. funny) turns up. His game stats while a space ship are for all purposes identical to his normal stats although they are rarely being used in that form.

The Impossible Man was born in the city of Poppupoopu on the planet Poppup. He is a member of a race of beings who reproduced asexually. They all have molecularly malleable bodies able to temporarily assume any shape imaginable.

By the time of the Impossible Man’s birth, Poppupians had evolved a collective consciousness, linking the minds of the entire race. Afflicted with a slight mental handicap permitting him a semblance of individual thought, the Impossible Man acted upon the boredom that his entire race experienced. He transformed himself into a space vessel and left Poppup.

Eventually he made his way to Earth, and found the planet to have great amusement potential. Dubbed the Impossible Man because of the absurd ways in which he exploited his shape-shifting abilities, the alien from Poppup created a major nuisance of himself. But eventually, the Fantastic Four convinced him to leave.

After a brief tour of other civilized worlds, the Impossible Man returned to his homeworld to share with his people his experiences.

When the world-devouring Galactus required sustenance, the Poppupians sent the Impossible Man to lead him to their world. Bored by existence to the point of despair, they welcomed oblivion with open arms. With the Impossible Man’s survival, the minds and souls of the Poppupian race would live on in the person of their most adventurous member.

This odd jokester has a thin frame, a long oblong bald head and bent, black eyebrows. He has green skin and wears a tight-fitting purple costume as shorts, gloves, boots and a chest piece. He looks really alien, and will cause attraction (which in his case is wanted) wherever he goes on Earth.

The prankster is most often seen with a very large smile on his oblong face while he is playing around like a jester.

However, the GM should describe Impy properly from an illustration so that the Players can say, at the same time: “Oh no, it’s the Impossible Man !”, “Not you !”, “Oh, no. Not him. Anybody but him !”.

This hyperactive, feisty little alien is fond of saying, “Hey, look at me, I’m the Impossible Man!” Impy likes attention and he also needs entertainment – constantly. He will do just about anything to avoid boredom, and he cries readily and for long periods when bested or frustrated. He would rather have company than be alone, and even the television is good company.

The Impossible Man likes to have fun! He is the most adventurous of all his people. But his idea of fun isn’t the same as ours ! Thus, he will sometimes play pranks that are dangerous to normal folks; pranks that are more absurd that fun. He loves movies and TV programs of all sorts, and can sit mesmerized for hours just watching show after show (there will be lots of channel switching).

On the plus side, he’s really rather nice and would never hurt anyone out of malice. His dangerous antics are just a side-effect of his unique sense of humor and the fact that he seems to forget that humans can be hurt by, for example, physical impacts, fire and cold. His main goal is often to cheer people up or to ’adjust their attitudes’, particularly the notoriously serious or level-headed types.

He is genuinely surprised when somebody maliciously attacks him, but will quickly adapt to the situation. He will, indeed, attack back hard to protect himself when needed. He is very childlike in mentality; loving pranks, but cannot see when a joke has gone too far. Then he will get sad when yelled at. The Impossible Man is indeed a true imp.

The Impossible Man has helped out the Fantastic Four on more than one occasion, but he is flighty and undependable. He completely lacks in attention span and is very easily distracted by funny surrounding stuff even when it’s most impractical to be so, and will turn his focus on such funny matters.

He will angrily walk away if he is hindered in his fun too many times, which will eventually happen as most people do get annoyed with him in the long run. The main reason being that Impy always talks and never listens.

The best way of getting rid of the Impossible Man is to completely ignore him. In short, the keywords for this little imp are: fun, fun, fun !

The Impossible Woman, as well as the Impossible Kids, are nearly indistinguishable from the original in terms of the above mannerism.

“Greetings, Earthman. I come in peace.”

“They call me the Impossible Man. And, now that I understand what these ’comic-book‘ things are… I want you to make one about me !”

“We Poppupians have no names. We know who we are !”

“I did so want to see what Mrs. Richards would transform herself into upon hitting the pavement ! Why did Thundra have to go and ruin everything ? No, wait ! Now I remember ! Most humans can’t change ! They’re stuck with the boring shapes they’re born with ! What a horrible way to spend one’s existence !”

“Bah ! What a bunch of dead-heads on this planet ! And I thought I was gonna have a lot of fun ! Phooey !”

Klaw: (Kwa-voom !) “We’re being attacked again ?!?”
Molecule Man: “But by who ? By who ??”
Impossible Man: “By the Impossible Man, my friend — the person you both so sneakily knocked unconscious a little while ago ! None of my kind has ever been defeated before — and to be honest, I find it most embarrassing ! When you embarass me, you embarass the entire population of the proud planet Poppup ! So either you so-called gentlemen are going to apologize — or you’re going to be very, very sorry !!” (Skra-whomp!)

Still, it might be easiest to introduce the Impossible Man as yet another imp from the 5th dimension. There is almost a genre change into the comedic and the bizarre whenever Impy is around.

Advantages:
Alter Ego (Spaceship form), Language (Poppupian), Lightning Reflexes, Misc. Advantage (The entire Poppupian race were part of a group mind and thus kept in constant telepathic contact with each other; this ability does now extend to all his clones in that they all think identically, with the exception of the Impossible Man and Impossible Woman who think slightly differently), No Vital Areas, Scholar (Astronavigation, Earth’s popular culture).

Equipment:
Starship [BODY 18 STR 17 INT 03, Hardened Defenses, Adaptation: 12 (Power is Useable by Others), Flight: 45, Matter Manipulation: 12 (Power is Usaeable By Others and it also works on Organic Materials), Sealed Systems: 25, Teleportation: 20 (Power is Useable by Others), Omni-Gadgets (x4) C-Omniability 8 APs, Notes: This immensively huge ship probably has access to multiple other Powers never demonstrated. The Impossible Man has access to all the powers of the ship with the Useable by Others Bonus for up to 10 APs after he has left the ship behind. This means that in most encounters when the Starship is close at hand, the Impossibly Man may freely use the Adaptation, Matter Manipulation and Teleportation Powers, R#2]. 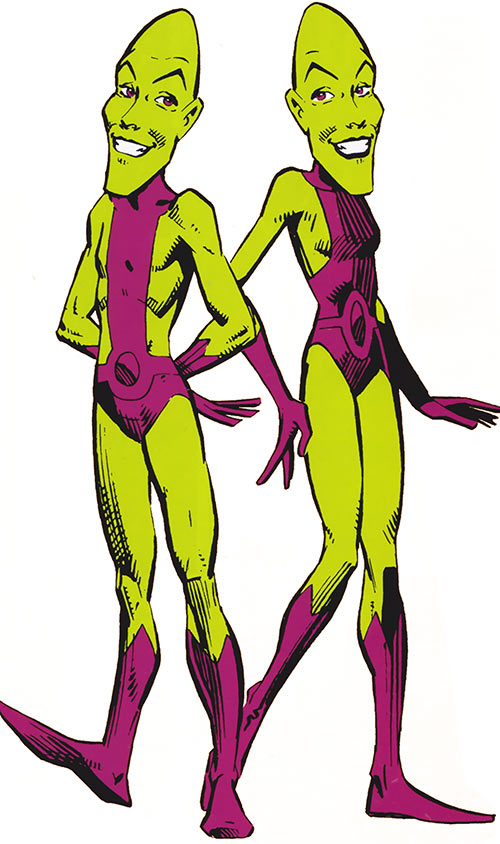 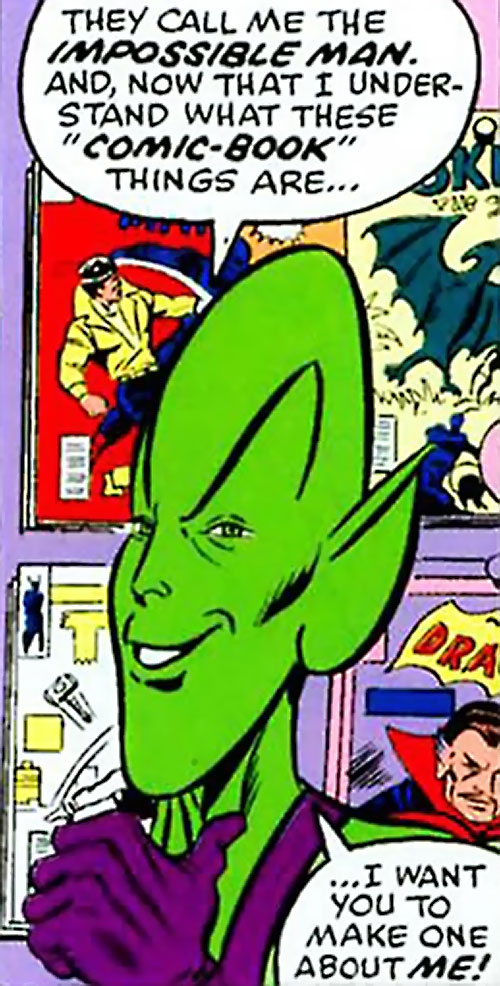