Imprint secretes a powerful acid through his hands, capable of eating away at even the strongest of metals, and of badly damaging any living beings he touches.

Imprint was one of the victors of the gladiatorial games held among the enslaved Inhumans by Loki in the 31st Century. He thus became part of the small cadre of Inhumans Loki was grooming to be his personal strike force to help him claim the throne of Asgard.

Just as the time arrived to attack, the Guardians of the Galaxy investigated the Inhuman’s enslavement. This brought them into conflict with the Inhuman Assassin Squad. Imprint joined in the torment of the captive Guardian Talon, until the other Guardians arrived to rescue him.

Imprint attempted to use his caustic touch on Nikki. But he was burnt by her heat before his touch ate through her costume. The Inhumans then left the battle as Loki called on them to join him in his invasion of Asgard.

Attacking Asgard, they made significant headway against its defences. But the Guardians then arrived to oppose them. After Woden, son of Thor joined the Guardians, the Inhumans and Loki were soon defeated. Imprint was trapped in Vance Astro’s psycho-kinetic shields.

The Squad was banished to The Black Canyon, an inescapable prison nestled between Niflheim and Muspelheim.

As vicious and spiteful as his team mates, Imprint is a standard bully. He trusts to his powers to overwhelm his opponents, and takes a brute force approach to most situations.

“Never mind her, my dear — concern yourself with Imprint ! My caustic touch will burn right through your costume and when it comes in contact with your bare arm.”

Bonuses and Limitations:
Acid has a Range of Touch, and can only be used via his hands (-1). 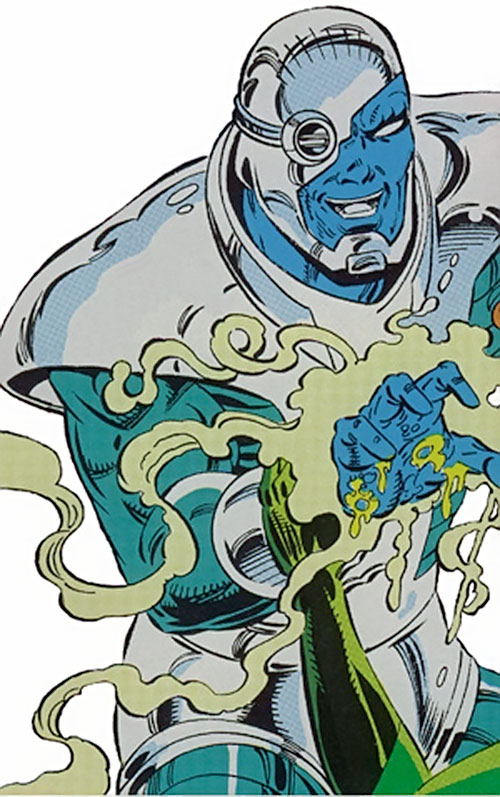