Though the text isn’t entirely clear, I *think* that he’s a Lakota  fellow.

Redpath is a former agent of S.H.I.E.L.D.. He was particularly competent at his job, conducting difficult special ops missions alone. He also seems to have been trained as a US Army ranger and is a skilled sniper.

Since his death, Redpath has existed as a succession of clones. All seemed to share the same consciousness and memories. Those clones are unstable and start dispersing after a time, especially as Redpath uses his high-energy powers.

Since his spirit was accepted by Haokah, Redpath is a master of air and weather. His control of mini-jetstreams is exceptionally precise. For instance he once disarmed Captain America (Steve Rogers) by blowing his shield away and right into Redpath’s hand.

He can also kick off major storms and tornadoes. In a major city, can easily kill a hundred people.

Lastly, Mr. Redpath can conjure his god to the Earth plane when outmatched, as he did against Thor.

The battle between this Indian thunder god and Thor was done off-panel. Haokah’s power level is thus unrevealed. One imagines that as a major figure, sky-god of the Anasazi pantheon and born of Manitou, his power level approaches that of Thor.

Haokah is the son of the sky-god Manitou and Onatah, the corn goddess. His wife is Amitolane, the rainbow-goddess. She follows behind him after a storm and cleans up after him.

The sworn foe of all things evil, Haokah is the eternal enemy of Nanabozho (“Coyote”) the trickster who would teach evil to mortals. Haokah also fights demons known as the Anaye, and evil spirits known as the Anamaqkiu.

In the years before North America was settled by Europeans, Haokah was sometimes followed by his mortal partner in arms, Gunnodoya. Gunnodoya might have been one of the Asgayas, his mortal sons.

While exploring the banks of modern Lake Champlain , Gunnodoya was swallowed by the great serpent Misikinebek. Haokah allowed himself to be swallowed as well and then saved his young ward by ripping open the side of the serpent from within.

In myth, Haokah cries when he is happy and laughs when he is sad. So he presumably looks peaceful when doing battle. He is sometimes accompanied by Oshadagea, his eagle partner.

Inali Redpath was a S.H.I.E.L.D. man long enough to possess in-depth knowledge of the organisation, including a number of confidential phone numbers.

He worked with Captain America at least once during the 1990s. Together, they freed a small work camp in former Yugoslavia during the secession wars. Redpath was impressed by Captain America’s skill and heroism during that case, and they became friends.

During most of his life, Inali kept close to his grandfather. The old man was highly knowledgeable about Lakota mysticism and close to Native American independence movements. Inali took to carrying a ritual stick with him on missions. With it he had a chance to offer a last prayer to the thunder god before he died, and have his soul ascend to a Lakota afterlife.

Redpath’s last mission was to investigate a mysterious cloning facility. S.H.I.E.L.D. had discovered it within its own accounting ledgers. Mr. Redpath was mortally wounded while attempting to apprehend one of the scientists. He had time to grab his stick and pray – and was heard, as an intense light drowned the scene.

Redpath was resurrect and empowered by the thunder god Haokah. But he had to use clones to host his consciousness, as his original body was too badly wounded. 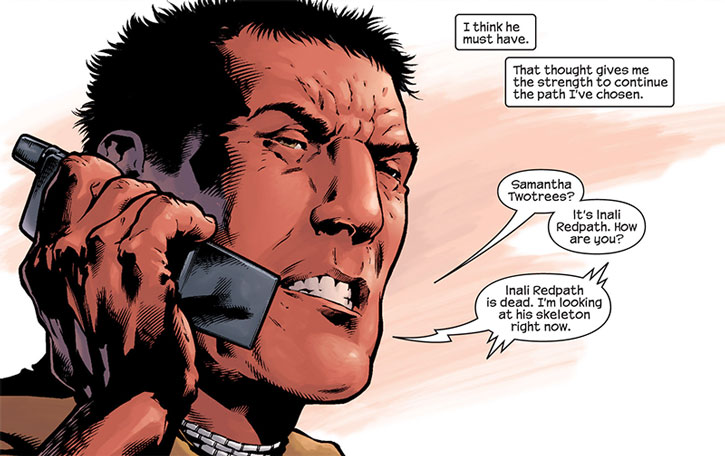 In his first clone body, he investigated the facility’s records. Inali found extensive records of the operation which neutralised then cloned Captain America before Hiroshima.

This betrayal of the star-spangled defender of liberty by his own creators finished turning Redpath against the US government. Redpath had the records shipped to Captain America, soon after Steve Rogers made his identity public.

Accepting the power of his god and increasingly despising the government, Redpath decided to follow his grandfather’s beliefs and reclaim the hand for its First Nations. He destroyed the clandestine S.H.I.E.L.D. cloning facility with a tornado, except for one full cloning suite that he carried to his grand-father’s place. He left a clone of him behind to fake his death.

When Captain America came to investigate the death of his friend, Redpath discovered that operatives from the shadow faction had come to terminate Cap. He flew to Rogers’ rescue as he was battling the super-soldier Barricade.

Redpath slew Barricade in front of Cap’s horrified eyes. An argument ensued – Cap refusing to consider a murderer to be his friend anymore, while Redpath was trying to explain his new agenda to Cap.

When they fought Redpath easily defeated Captain America. He forced him to drink an herbal concoction prepared by his grandfather, hoping it would allow his friend to access repressed memories. Although Cap was badly hit by the hallucinogen, he did relive formerly suppressed memory of him and Bucky being fed false memories then cryogenically frozen.

Redpath then attacked Miami with a windstorm, doing severe damage and killing about a hundred. During the storm the drugged Captain America was thrown into the sea, but he was rescued by an Atlantean named Hana.

Having taken the full measure of his power, Redpath changed bodies – the previous clone had burned out. He then made his way to Washington, intended to raze the seat of government.

However, Captain America and Thor (Thor Odinson) were waiting from him. Thor wrestled control of the weather from Redpath, forcing him to summon Haokah. While the two thunder gods battled, Cap confronted Mr. Redpath.

Cap had also deducted that Inali Redpath was now a series of clones, presumably managed by his grand-father. The only way to stop Redpath would be to destroy the clones, which Cap refused to do as it would kill Redpath. But Nick Fury then took it upon himself to arrest the elder Redpath and blow up the clone machinery, possibly killing Inali Redpath.

The last illo is Redpath conjuring Haokah to fight Thor.

Redpath is an intense, tough, solitary soldier. He has always been serious about the moral implications of his work as a killer, always going an extra mile to make sure bloodshed was justified. This aspect of his philosophy was enhanced when he witnessed Cap knocking out Serb militiamen which, alone, Inali would have had no choice but to kill.

Still, Redpath had serious problems in reconciling his Lakota heritage, his duties as an American citizen, and his black ops work. When the power of his gods became manifest and he died only to be resurrected and infused with divine essence, he finally resolved his dilemma. He now considered that the cause of the Natives was just, and was worth shedding blood.

This wasn’t contradictory with being a believer in the American dream. As Redpath saw it he would be fighting for justice and the oppressed; like Captain America did. But while Cap could afford not to kill, Redpath, like Nick Fury, was forced to make tougher choices.

Although he was still a serious, practical military operative, Redpath was very proud of his power. He now embodied the traditions of his people. For instance, Inali was eager to remind Thor that the Norsemen were not the only ones to have a thunder god.

Although he seemed self-assured, part of him still seemed to doubt. It was important for Redpath to personally justify and explain his actions to his former friend and hero, Captain America.

This also meant reciting the interminable litany of the crimes settlers committed against the natives, to make clear that *he*, in his opinion, was the good guy – as noble as Cap in his aims and philosophy.

“This government has stolen my people’s country, Steve. You have to see my point of view on this. You have to understand that this country of White people you cherish so much are invaders. They made a nation on the blood of my people. They used a federal system of government to oppress those who created the concept. Populated a land by removing those who rightly lived there.”

Drawbacks:
MIA toward his cause, SPR (the clone bodies start dispersing after about 18 APs of time), Power Loss: Air and Weather Control drop to 0 when Aokah manifests via Dimension Travel.

Equipment:
Previously used various US military issue equipment, such as sniper rifles and assault rifles. Since gaining his powers he has used no special equipment, save for a cell phone. 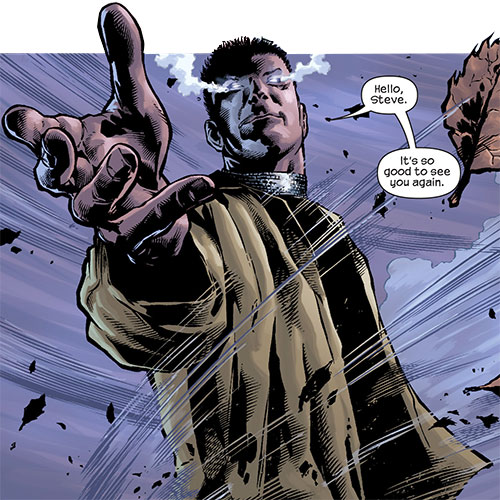 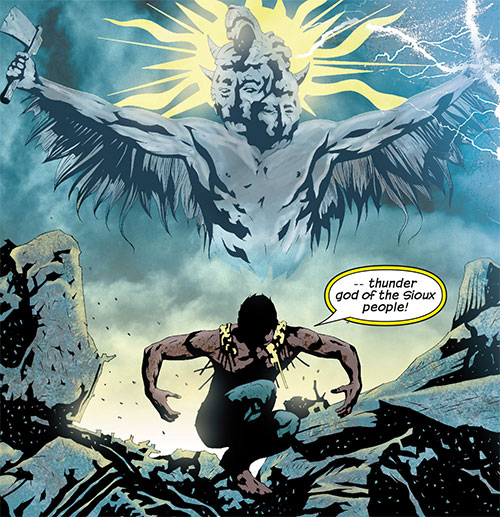