Incoming first appeared in 1993. He was a minor opponent in a minor book of the long since defunct Ultraverse super-hero setting.

So, yeah, he isn’t exactly high-profile. But he’s a tough guy with big guns working as a criminal mercenary. Meaning that he’s easy to use in all sorts of stories.

With his high-powered firearms and soldierly skills, Incoming can lay down a large amount of accurate gunfire. Originally, he dual-wielded  submachineguns.

Later on, Incoming was enhanced for reflexes, coordination and eyesight. He also deployed more specialised and powerful weapons, such as a combat shotgun with explosive slugs or a high-end semi-auto sniper rifle.

Incoming was born in eastern Cambodia. His village was bombed by the Americans when he was but a kid ; his parents died in the blast. Then the Khmer Rouges  rose to power, and he was given the choice to join or die. Along with packs of boys no older than 14 or 15, he started killing “counter-revolutionaries”  using machetes and guns.

When the Vietnamese army put an end to the madness in Cambodia, he deserted and joined a refugees camp. Luckily, no one recognised him. He then made it to Hong Kong, met the right people and joined the Dragon Fang as an enforcer. The youth then worked his way up through talent and brutality.

Along with Black Tiger and Bloodshed, he encountered the Solution for the first time while protecting an heroin shipment. Incoming discovered that Solution member Outrage was quite bulletproof ; he and his colleagues lost badly.

Incoming trained as hard as he could, craving revenge. He tried new weapons, and the triad even made him an ultra . They encountered the Solution again when the mercenary team fell into a trap. Although they almost managed to kill the Solution, they ultimately lost.

He’s the kind that shoots first and couldn’t care less about asking questions later. And yet, he’s the least macho and boasting of the three.

After having been enhanced, Incoming started using more specialized and powerful guns, such as :

Revenge of the Dragon Fang

Incoming also received ultra enhancements. These gave him two more points in DEX and DEX-related skills (all save Military science), and Telescopic vision: 01. 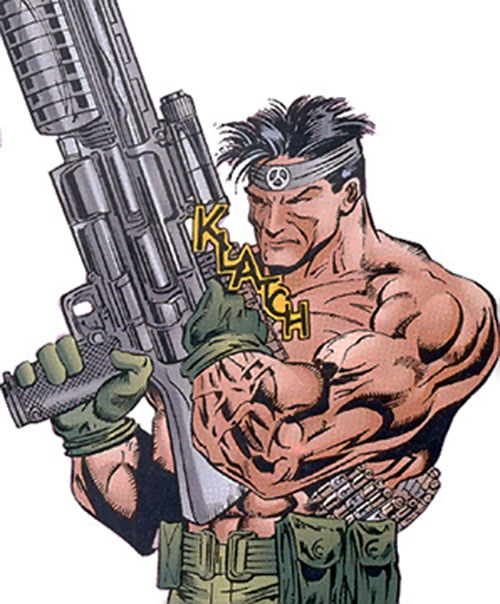