Damon Dran first appeared in a 1972 Daredevil storyline. He has since returned about once per decade.

Dran evolved into a sort of James Bond villain figure. This makes him an excellent Big Bad for street-level heroes. Especially given his track record of fielding exotic combat/martial arts specialists.

This profile has S P O I L E R S for a number of Black Widow and Captain America stories.

For a short while, Dran mutated himself into an invulnerable, super-strong, unearthly giant with energy projection powers. This is when he took the Indestructible Man monicker.

Though he no longer is a giant, Dran kept the core of his power – his invulnerability. He is seemingly impervious to any physical attack. He may also retain some slight degree of superhuman strength. But he’s a schemer, not a fighter.

Dran is an intelligent, ruthless conspirator. He’s adept at creating criminal organisations from the ground up then efficiently running them.

Damon Dran was originally known as a wealthy munitions dealer. He had shady contacts within both the underworld and the government. The bulk of his fortune was apparently made during WWII.

After Hiroshima, Dran became aware that the planet could now be destroyed at any moment. And thus all his work, his abilities and his schemes would be annihilated and forgotten.

Dran’s life work became to survive the nuclear annihilation of Earth. This involved a mysterious research project called Project: FOUR. FOUR may have had government backing – or maybe Dran just deceived people into thinking it had. During the 1960s, FOUR developed a “power globe” of unclear properties.

Dran’s goal all along had been to steal the globe to make himself indestructible, after betraying everyone at FOUR.

During the heist, French used a capsule of gas provided by Dran. It was supposed to knock out the project’s scientists. But the “stun gas” was a deadly poison. Now an unwitting murderer, French ran away with the globe. He stayed on the run for eight years.

Dran’s men kept hounding French. They eventually captured him and Romanoff in San Francisco. Dran’s scientists scanned French’s mind and saw where he had buried the globe. Two of Dran’s men recovered the globe, only to be murdered by their paranoid employer.

Dran then decided that Daredevil (Matt Murdock), who was looking for the Widow, was the main threat to his plan.

The mysterious globe in action

Dran sent martial artist the Blue Talon after DD. After that failed, he sent a brainwashed Black Widow. Daredevil invaded Dran’s fortified manor, and freed French. However, Dran was already being imbued by the power of the globe.

The ammunition monger emerged as a mutate , and able to project energy blasts from his hands. But those blasts blew up the manor, which collapsed on him.

Grasping electrical wires to drain more power, Dran emerged from the wreckage as an inhuman giant. Daredevil and French escaped. Dran was engaged by the SFPD and then the National Guard. The troops couldn’t hurt him, but managed to slow him down.

However Dran’s power and mass kept increasing. This threatened to collapse the bridge he and the Guard were fighting on. But Daredevil and the Black Widow joined the fight. They gained the upper hand when French threw a steel debris into the globe, destroying it and robbing Dran of his power.

Dran was taken to a prison. French, fatally wounded by the exploding globe, died in the Widow’s arms.

While disfigured, depowered and back to human size, Dran gradually regained his invulnerability.

Escaping, he plotted his vengeance against the Black Widow while building himself a new network. Dran even managed to infiltrate the KGB with his own agents. He also relocated to a gigantic submarine cruising in the Sea of China.

In 1983, the villain kidnapped Ivan Petrovitch. He then fed false information to both S.H.I.E.L.D. and the KGB. Thus, the Widow was sent to infiltrate a Russian project which S.H.I.E.L.D. thought to be connected with the missing Petrovitch. She fully succeeded.

Dran, manipulating the Soviets, pulled the rug from under her by blowing her cover. A scientist with whom the undercover Widow had fallen in love was killed before her eyes. Then the KGB was tricked into hounding the Widow, and S.H.I.E.L.D. received false intelligence. This drove the Widow into a trap manned by Dran’s assassins.

The Widow managed to defeat them. She even took down the Iron Maiden with the help of S.H.I.E.L.D. agent James Woo. But Natasha was eventually taken out by Snapdragon.

Dran replaced the Widow with an impostor. The rigger was to trick Fury into flying the Helicarrier above a specially-prepared island. Then the fake Widow would murder Fury, and the Helicarrier would be shot down. The Widow would have nowhere to turn to, and even Ivan Petrovitch had been brainwashed into serving Dran.

However the Widow escaped, defeated everyone, freed Petrovitch, and warned Fury in time. Fury killed the Widow impostor, and had S.H.I.E.L.D. destroy the island.

Dran was thought dead in the bombardment. His invulnerability was then unknown, perhaps even to himself.

By 1994, Dran had established a new criminal organisation in New Orleans. Kidnapping and selling people was its main business. He was assisted by Kono Sanada, Golddigger and a host of criminals and musclebound thugs.

One of his best contracts involved kidnapping runaways to sell them to Baron and Baronness Zemo. But this brought his network to the attention of the heavily-armed vigilante Americop.

Meanwhile, Diamondback (Rachel Leighton) was investigating the death of Snapdragon. This led her to Snapdragon’s former employer, Dran.

Diamondback was captured, but all that did was bring Captain America in. Although all three crimefighters were captured, Diamondback escaped and summoned the Avengers.

Despite their considerable armament, Dran’s forces couldn’t hold their ground against Earth’s mightiest heroes. Therefore, Dran boarded an helicopter to flee. But the helo was shot down by Americop. Dran was apprehended by his nemesis, the Black Widow.

By the mid-2000s, Dran’s invulnerability began to wear off. He started using surgery, cybernetics, ultraviolet-based treatments and drugs to armour his body and prolong his lifespan. However, the treatments made him even more paranoid.

Using his vast resources, Dran began going after his enemies. He was convinced he had to kill them all before they’d take his life.

His paranoid obsession focused on the shadowy organisation called Chaos. Dran couldn’t get any grip on them. They seemed to have no organisation, couldn’t be damaged, their actions made no sense, and they could do seemingly impossible things.

Dran’s actions eventually drew the attention of S.H.I.E.L.D.. The Black Widow stopped him before Dran could kill her. However, Chaos inexplicably subverted a senior S.H.I.E.L.D. agent, who murdered Dran in his cell using poison gas.

Chaos then continued playing silly buggers with the Black Widow, which… yeah, bad idea. She eventually determined that they :

The Widow nevertheless slew the Prophet – the man receiving the communications from the future. Thus, Damon Dran’s death was avenged by his greatest enemy.

Dran’s face was at first terribly disfigured. But that seemed mostly healed (through still scars-ridden) during his 1990s appearance. Perhaps he found ways to have some corrective surgery done despite his invulnerability.

Dran is an egomaniac who feels entitled to fame, power and money. The notions that he might die one day, or that the humanity might not acknowledge his intellect and willpower, are anathema to him.

However, he tends to move in secretive ways rather than directly claim attention. He prefers to quietly build up his power bases, scheme and live in luxury.

During his initial plan, Dran was big on eliminating his henchmen as soon as they had done their job. He routinely double-crossed and backstabbed everything and everyone. This traitorous streak seems less strong now that he is indestructible. Yet he remains a paranoid double-crosser whose plans usually involve obfuscation and heinous crimes.

“I wonder… do they whisper my name, even here ? Do they know my history — do they fear me, those people of San Francisco ? Or am I merely another stranger – a face without name or identity ?”

“I will crush the world, mister French — for only by reducing humanity to the level of cringing slaves may I find myself truly safe… truly free from the terrors of their petty warfare ! And I shall begin that subjugation — with YOU !” (BAWHUMP !)

“No, my dear. I am an independent. I made use of the Soviets to further my ends only. You were taken because my life now holds one goal — your utter, irrevocable destruction… followed by that of the meddling Daredevil. But not in the manner which you might suppose. No, murder would be too merciful — too pedestrian. Observe the viewscreen and all will become clear.”

Equipment:
Dran is usually surrounded in visible luxury. His favourite car, for instance, would be a Rolls Royce with darkened windows and a uniformed chauffeur (not that one).

He has access to advanced technologies, such as brain scan/brainwashing machines. But those are difficult to obtain and necessitate lots of resources. Thus, for 90% of his operations, normal technology such as firearms and helicopters are used.

Examples of advanced technology include:

When fully powered, the Indestructible Man received the following:

There isn’t enough material about the post-mid-2000s stats of Dran. Likely possibilities :

He may have had other defensive Powers, including Systemic Antidote. Yes, he was killed by a toxin, but it seems that it had quite a lot of Poison Touch and Acid APs.

Obvs, the PL is useless here since he’s all defense and no offense. Much of what he actually does is throw money and paranoia at problems.

Dran is usually surrounded in visible luxury. His favourite car, for instance, would be a Rolls Royce with darkened windows and a uniformed chauffeur.

He has access to advanced technologies, such as brain scan/brainwashing machines. But those are difficult to obtain, necessitate lots of resources, and he doesn’t use them *himself*. Thus, for 90% of his operations, normal technology such as firearms and helicopters are used, and only by henchmen.

Examples of advanced technology include:

When fully powered, the Indestructible Man received the following:

There isn’t enough material about the post-mid-2000s stats of Dran, after he lost his powers. Likely possibilities : 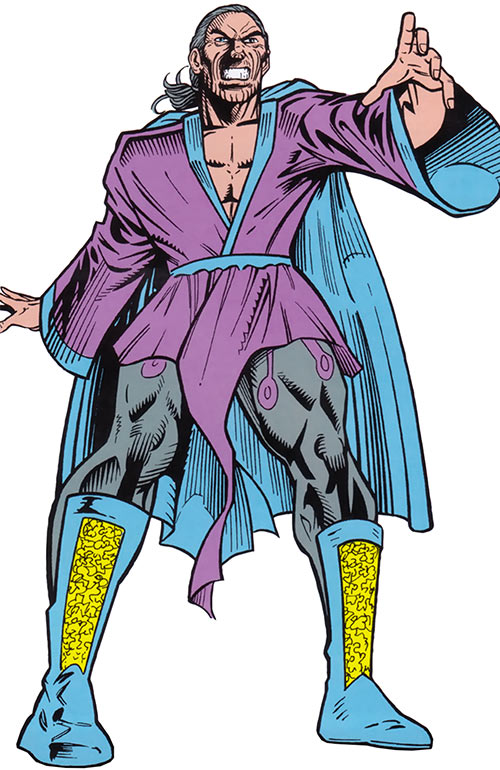 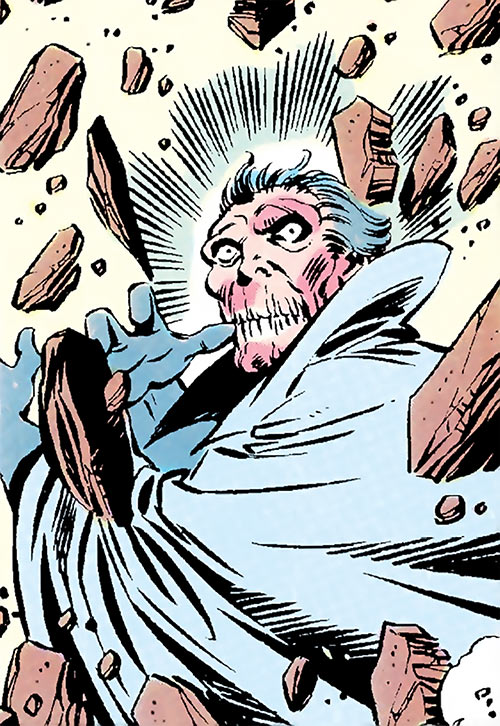 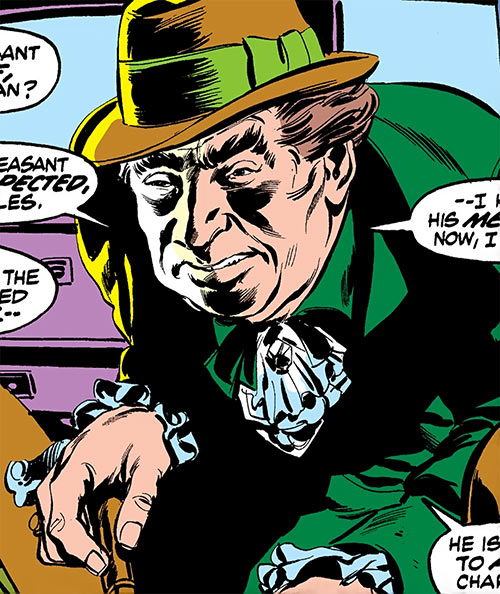 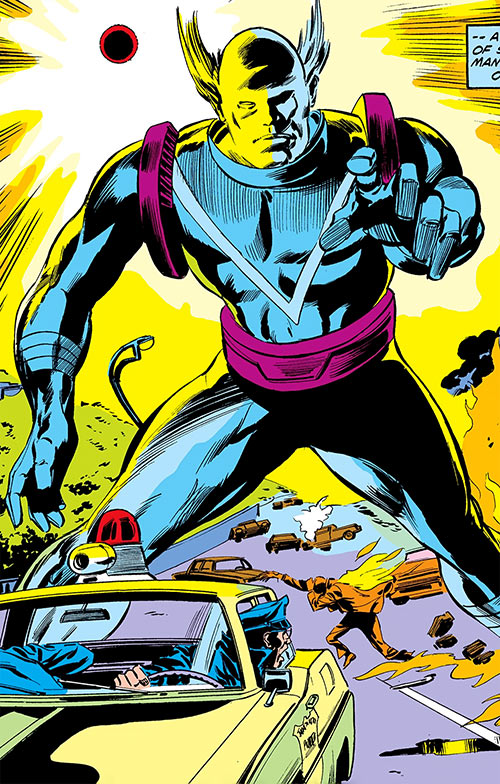 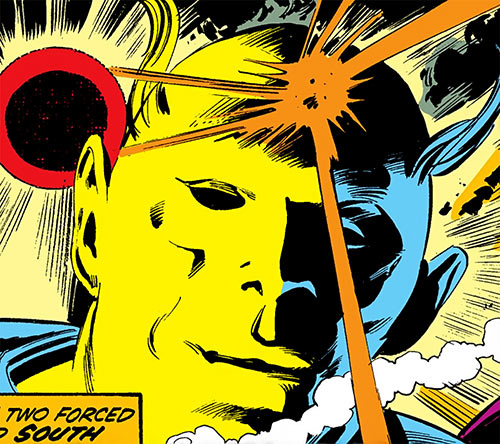