An artificial being, Brainiac 8 has a highly advanced computer mind. She can easily interface with surrounding technology, using or paralyzing it. Strong and durable, she can fly, project force fields, fire blasts of energy.

She has sensory abilities far beyond human limits, able to detect life signs, unusual energy wavelengths, or any other kind of detection she may be called upon to perform. She can also project recorded images on a small scale, although they appear to be obviously holographic.

A resident of Colu in the far future, at a time when Coluans have become artificial beings, Brainiac 8 was focused on establishing Coluan supremacy. She had an ongoing campaign of wiping out entire planets to achieve this. It is unclear whether she was carrying out the wishes of the Coluans, or operating on her own.

Brainiac 8 learned that Colu had been derailed from their destiny to conquer the universe by the actions of Donna Troy in the 21st Century. She thus travelled back in time to eliminate Troy before she could intervene. Brainiac took on a false personality, so as to seem less threatening.

The journey didn’t go smoothly, and Brainiac arrived badly damaged. Her self-repair systems having kicked in, she searched for cybernetic organisms to help her repair herself. However her desperation and actions were seen as attacks by those she approached. This meant first the Metal Men, and then the Titans and Young Justice as she tried to reach Cyborg.

Their responses forced her to automatically act offensively, leading to the hospitalization of many of them.

Fleeing again, she located a dormant Superman Android. She activated it before shutting down for repairs. When the remnants of the Titans and Young Justice caught up to her, they had to face the Android, which killed Lilith and Troia (Donna Troy). 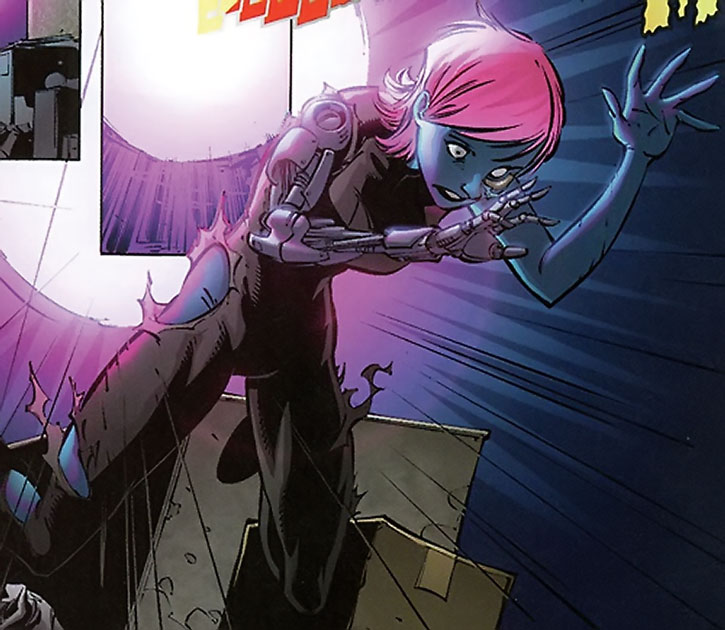 Held by S.T.A.R. Labs while her system slowly repaired itself, she was reprogrammed. The gynoid was revived by Arsenal to join his newest incarnation of the Outsiders. Her memory supposedly wiped by the damage from her arrival in the time period, she took the name Indigo.

Indigo continued to operate as a loyal member of the team, despite Nightwing’s suspicions. But the Brainiac 8 personality took covert actions against the team, such as using her control over technology to block their communications at critical points.

During her time with the team Indigo became close to Shift, and the pair began a relationship.

When Arsenal deduced the team had a traitor, Brainiac 8 was eventually discovered. She suppressed the Indigo personality, assuming full control of their body. Contacting Brainiac, the pair of them allied with Lex Luthor and his puppet, Superboy.

The four battled the combined Outsiders and Teen Titans. As Brainiac 8 fought Shift, the Indigo personality managed to break through, begging him to kill her before she could harm her friends. Shift reluctantly complied. He transformed her body to flesh, killing her.

The Indigo personality is sweet-natured and slightly naïve, learning how to operate in society. She takes pleasure in simple things like doing laundry, watching silent movies, and bowling, at which she handicaps herself so as to make it more enjoyable.

Fearless and loyal, she tries to earn Nightwing’s forgiveness. She seems to genuinely care about Shift.

Brainiac 8 is a ruthless killer, eliminating anything which may get in the way of Coluan supremacy. She has a disdain of organic life, and cannot understand why her ancestor has yet to abandon it. Superior and calculating, she despises the Indigo persona she was forced to experience.

“I have no recollection of the events that you speak of. I have no recollection of any existence prior to my reactivation in S.T.A.R. Labs 3 days after my shutdown. I do, however, understand what I have done. And, whether you believe it or not, I have desires. At the moment, my greatest is to serve humanity. I can never make up for what I have done. But I can at least… help.”

Gorilla soldier: “Damned human meddlers ! Cut them all down !”
Indigo: “I am neither human nor a meddler. Rather, not a meddler in the conventional sense. A meddler. Or a busybody. Or a tale-bearer. Or a kibitzer. None of these truly describes any aspect of my personage.”

Indigo: “I am fully able to run the process and accompany the team on collection of the sleeper agents.”
Grace: “She’s quite the multi-tasker.”
Indigo: “You bet your ass.” [Silence] “I am practicing my use of colloquialisms. Was it inappropriate at this juncture ?”

Shift: “Well, hell Indigo, you’ve seen this movie 6 times. You’ve got an actual photographic memory — doesn’t it bore you ?”
Indigo: “No. For each viewing I suppress the memory of the film thus enabling me to view it again for the first time.”

Indigo: “To aid in fair competition with others, I adjust my motion stabilizer to throw off my balance, causing imperfection in my performance. It allows me to suck at bowling.”
Shift: “Good. You sucking at bowling it is.”
Indigo: “And I can suck to various degrees.”
Shift: “Duly noted. But you should never say that out loud again.”
Indigo: “Why ?”

“I am Brainiac 8. I am your destruction.”

“Today will mark the end !! You will all die ! Die, so me and my kind will flourish ! This universe — this plane of existence is our domain ! We will have it !”

Before her Brainiac 8 persona took over, Indigo’s only Connections were High ones to Shift and the Outsiders, and she had the Dark Secret Drawback. 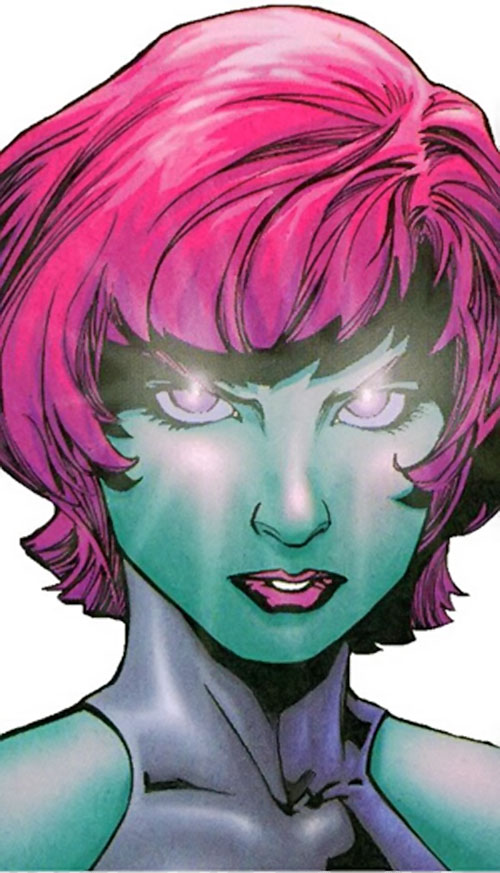 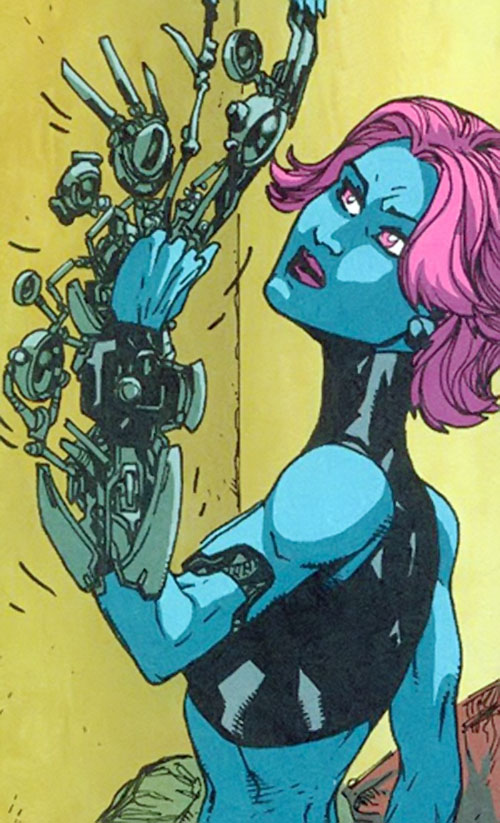 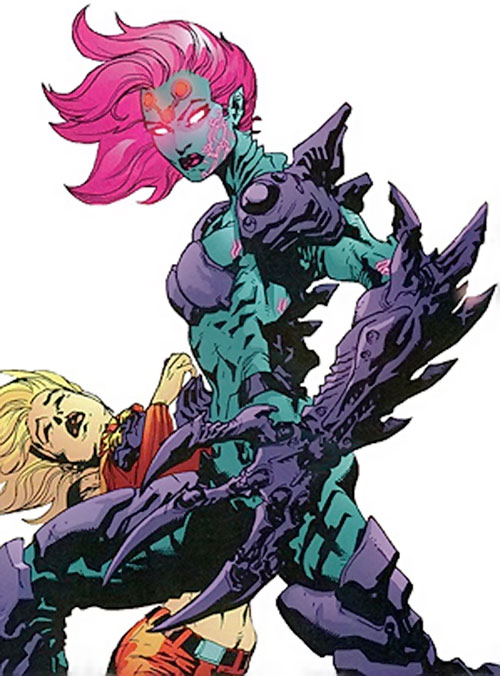