Indigo charms things. People, locks, buildings or whatever, Indigo is capable of going wherever s/he wants, and of getting whatever knowledge s/he wants out of a person or computer.

Indigo has acute senses, can perfectly mimic the voice of anyone s/he’s heard, and is a quick study. S/he is talented at anything s/he tries to do.

Hir superhuman levels of perception allow hir to easily detect weaknesses in opponents, although not non-sentient ones.

Extremely agile and stealthy, Indigo can disappear completely in shadowy areas, and usually acts as team scout and infiltrator. This is reminiscent of Nightcrawler.

Indigo’s home world became a victim of the Rapture. The population became its slaves, but Indigo was saved when s/he was recruited by the Sovereigns.

Fleeing the Rapture, they arrived on Earth. They appeared near the Crossroads Coffee Bar, situated in a town named after it. The bar is run by the sisters Pansy Smith and Violet Jones, and is larger on the inside than it appears from outside, with some doors within the building sometimes opening into other places, even other dimensions.

The Sovereigns came into conflict with the Female Furies of Apokolips, causing damage to the bar as they fought. Afterwards they helped repair the damage and took jobs there.

Their first encounter with the strange properties of the bar came when Cascade disappeared, through one of the doors. When they found her, the other Sovereigns discovered she had been brainwashed and transformed into Nike by an unidentified opponent. Nike joined Zelus, Bia and Kratos. The used her to try to open an enormous set of doors.

They settled into their new home. They protected it from extraordinary threats, such as Dystopia or Deadline. They also clashed with the super-powered serial killer Skin Dance. Skin Dance was an old enemy of Crossroads’ sheriff, Molly Savoy, who had befriended the Sovereigns.

While searching for a couple of teenagers (Casey Rassendyll and Daisy Miller), who had gotten lost in the Bar when the Sovereigns had a battle there, they travelled to their homeworlds.

Have sovereignty, will travel

There they first came into conflict with Triage, a creation of Maîtresse, sent to retrieve Cascade and fight the Rapture. Triage had empowered a couple of other individuals it had freed from the rapture, but brainwashed to obey it.

S7 member Network then receive a psychic distress call from a captive telepath. This person was a slave of a company called allied with the Shogun crime cartel.

Network allowed herself to be captured by Chimera, an android serving Shogun, although she was actually in control. She kidnapped Cascade and Conal Savoy, Network’s boyfriend, as presents for Dana Efemilia Hanro, the head of Shogun.

The other Sovereigns, and Conal’s mother sheriff Molly Savoy, tracked them to the island of Meridian. At this point, Network was carrying out her plan to free the infant telepath held captive by Shogun.

Following their safe return, Cascade, feeling Network’s betrayal the keenest, left the team. She tried to start her own life in Manhattan. She returned to the team after a while.

I’ve got the Power

They again came into conflict with Zelus, Bia and Kratos who had gained a new Nike, the transformed Power Girl. Sovereign Seven managed to defeat them and free her from the enchantment. Soon afterwards they were asked for help when power-seekers released the Gatekeepers of the Abyss. In fighting them, Rampart was killed. Power Girl took his place on the team.

They became involved a civil war in the country of Kuristan, a neighbour of Russia. This ended when the Rapture arrived on Earth. But despite having their powers suppressed, they managed to repel the invasion.

Friendly and open, Indigo is charming to everyone, and makes friends easily.

S/he is even tempered and capable of seeing all sides of an argument.

“I am Indigo. I am the sable unbound. Consort to the shadow, herald of the beyond. Umbra and penumbra, both heart and frame of the eclipse. From darkness unfolding, I bring forth light to disguise my aspect, as shadow defines it. Pathfinder lamplighter one to find the true way, the other to reveal it. In one, all. In all, one.”

“Against a living foe, I’d have no trouble charming the way that person thought, the better to anticipate their actions. But these artificial creatures have no soul. Without that, I have no insight.”

“I find myself asking, why were they seduced and not I ? Why did I have to be the one to stand against that awful tide ?” 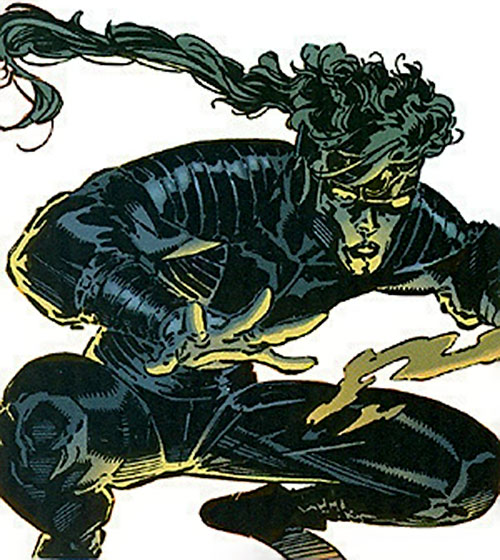