Ms. Moomji is a potent concentrate of sexually idealised woman, and has received advanced cosmetic surgery to make her even more attractive.

She is so stunning as to look unreal. Like a glamour shot of a top model with the usual Photoshop® enhancements, only in the flesh.

Her body generates synthetic allure-enhancing pheromones, and she is highly trained in seduction, psychology and acting. She can vamp nearly any man-who-likes-women with astounding efficiency. When seeing her results, James Rhodes half-assumed some sort of mesmerism or even magic spells were at work.

The pheromones are mostly there to speed things up. Thus, being shielded from her scent offers no real protection.

Though her skills are sophisticated, she normally goes for something simple, quick and reliable. She’ll identify a few red button issues and psychological weakness, and leverage these to accomplish her mission. In Stark’s case, it was chiefly his alcoholism.

The Sisters of Ishtar appear to be well-trained spies, with some combat training and the ability to endure considerable pain and discomfort to get the job done. Her plan to approach Stark thus involved deliberately suffering a broken arm, broken ribs, a concussion, etc..

One assumes that the Sisters are also fluent in multiple languages.

The Sisterhood of Ishtar (named after the ancient Middle Eastern goddess of love and war) is a freelance, high-tech espionage organisation. They specialise in the seduction of straight male targets.

Only one base is known, hidden in the American Southwest. It boasted considerable automated defences, a male manager of apparent Han descent, and a half dozen Sisters. One of the Sisters there, named Friska, was a psychic sensitive.

Your beauty is beyond compare

One of the Sisters, Indries Moomji, was famously hired by Obadiah Stane to psychologically destroy his rival Tony Stark. This would allow Stane to take over Stark’s company.

Though Indries was to be the death blow, the full campaign included various attacks and actions of sabotage.

During one such assault, Indries positioned her car under an exploding arch. As intended, she was wounded by the falling structure. And as planned, Iron Man (Tony Stark) got her out of her crushed car and flew her to the hospital.

Smitten by her charm and beauty during this brief contact, Stark kept visiting her at the hospital and sending flowers. Moomji explained that she was a foreign engineering student visiting Stark International. She tailored her exoticness, dead sexy accent and diction, humour, courage and interest in his technology to Stark’s tastes.

Within hours, Tony Stark was gaga about her.

Indries rapidly determined that Stark was an alcoholic. In her assessment, kicking him off the wagon was the surest way to break him.

As the physical assaults from Stane’s agents continued, she manipulated Stark into feeling that his reluctance to have alcohol nearby made him weak and unmanly. She also occasionally hired extras to mock Stark for being a milksop for not drinking liquor.

As Stark’s endurance ran out from the Stane harassment and Indries’ subtle pressure, Ms. Moomji arranged to be unreachable for several days. The despondent and lonely Stark reacted with something akin to physical withdrawal. Thus, he nearly relapsed – though he threw away the bottle at the last second.

Indries reestablished communication, providing loving support and admiration that re-energised Stark. Once it became clear that her support was the only thing between the exhausted Stark and a major breakdown, Obadiah Stane gave the kill order.

The destruction of Tony Stark

Indries verbally tore Stark apart, cruelly rejecting him. She hit every single one of his psychological issues with considerable force. Devastated, Stark went into an alcoholic haze. Then he proceeded to destroy his own life whilst preventing his friends from helping him.

Indries joined Stane at his HQ. There she monitored surveillance about Stark to make sure that her blow had the intended consequences.

Despite the effort of James Rhodes (Stark’s closest friend) and Yvette Avril (the manager of the French branch of S.I.), Stark ended up an alcohol-soaked wreck in a skid row motel. Stane officially took over Stark International. The company was soon renamed Stane International.

He talks about you in his sleep

Knowing that Rhodes had replaced Stark as Iron Man, Stane told him about the Sisters of Ishtar. As a result Rhodey invaded the Sisters’ US base, capturing Indries. She simply told him that she hadn’t done anything reversible to Tony Stark. He had been an alcoholic *before* meeting him, and would remain an alcoholic for life. She had simply triggered a bad relapse.

Though Rhodes made a big show of not being influenced by her charm, he then let the amused Ms. Moomji leave freely.

Rhodes returned a few weeks later to the Sisters’ base to investigate their strange energy source. There, he ended up helping them close a transdimensional  portal that had been growing within. They haven’t been seen since.

While discussing Indries Moomji, a fancy *made-up hypothesis* appeared. In this scenario she was Persian, and the Daughters of Ishtar were originally a Communist organisation fighting the Shah’s regime.

After the revolution , they went international, allied themselves with Chinese and North Korean agents, and gradually become apolitical and purely mercenary. With this scenario likely languages for her include Modern Standard Arabic, Farsi, Mandarin Chinese, and perhaps some Slavic and Romance languages, plus Classical Arabic.

While this was totally made up, some GMs might wish to use this background for her in their games.

Years after this profile was written, Marvel handbooks specified that this character is of Indian origin. Without further precision, even though India is… big.

Indries’s ethnicity is hard to pin down. She has light skin and seems vaguely Slavic (South-Eastern Europe, maybe) or a fair-skinned Persian. But her altered face and body draw attractive features from some Asian ethnicities, American canons, etc.

She generally seemed to be a very professional mercenary. But then, she is almost always playing a role tailored to her target’s weaknesses.

(In character) “I shan’t, I promise. By the way, I am Indries Moomji. I am in your country to study technology, I was touring your plant — and quite impressive it is — when the… accident occurred. America is not dull, is it ?”

Indries (In character) “You must think I am terribly forward and brazen… a horrible woman…”
Tony Stark: “No. No, I don’t.”

(In character) “Hello, Iron Man. It is Iron Man, is it not ? I have sometimes trouble with names. And my English is not perfection yet. You have knowledge of Tony Stark ? He is not hurt ?”

“Where is your wit, Tony ? Your style ? Your taste ? In your bank account, perhaps. Certainly no place else. What are you, Tony Stark ? A glossy shell ! A preening poseur who hides his inadequacy behind a credit card sophistication. A petulant child with a minor talent for electronic tinkering and a quivering ego… and that is all. I was amused by you. I enjoyed taking gifts from you and watching you pant after me like a puppy dog. But love you ? It is astonishing even you can be so stupid !”

No problem here. The Sisterhood would have been hired a few times by Amanda Waller, to devastating effect.

They likely still are in her contacts list, and may also have worked for the UN’s Checkmate organisation. 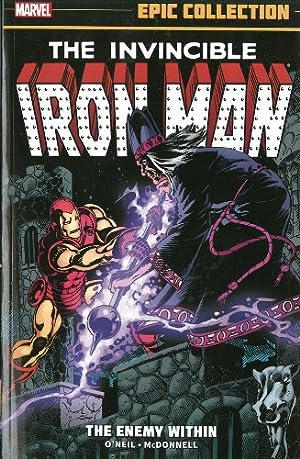 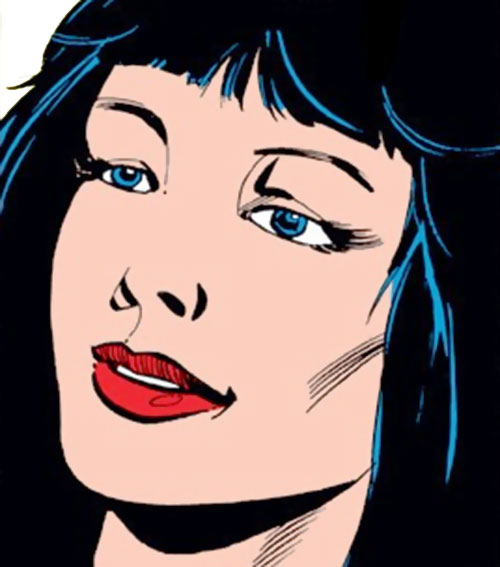 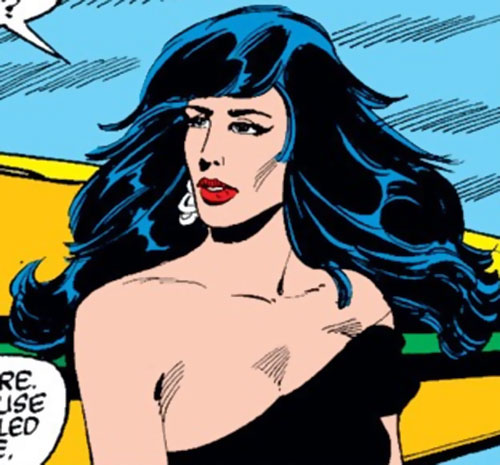