In 1965, the mighty Thor damaged his hammer Mjolnir in battle against the Destroyer. He flew to Pittsburgh, and used the Williams industrial forges there to patch the damage. A small flake of mystical Uru metal was left on the floor once he was done.

The workers were impressed with seeing Thor work, then test the balance of his mallet. One of them, named Joseph Conroy, noticed the metallic chip. He kept it as a good luck charm – and keychain, since there was a small hole.

However, Williams Innovations had been ailing for years. The factory was sold shortly after 1965, after the disappearance of unsuccessful owner Simon Williams. Conroy was among those who stayed. He was still on the staff in 1980.

(This is using publication dates. According to dialogue, only a “couple years” have passed due to the usual sliding timeline shenanigans.)

As the Williams business empire fell apart, the Maggia had wormed its way in – using laundered money. They thus ended in control of the Pittsburgh foundry. They hired an outside manager, Vince Paretta, who renamed the plant the Paretta Steel Mill.

Though Paretta wasn’t Maggia, he knew that his foundry was a laundering operation. Since he was compromised anyway, he greedily decided to also run a numbers racket among his workforce.

Conroy foolishly participated. Over time, he lost big. Incensed, he threatened to blow the whistle about the illegal gambling. Of course, that threatened to also expose the mob ties.

Despite threats, Conroy refused to back down. Paretta ended up paying another worker, Tim Turpin, to set up a fatal “accident”. Turpin bashed Conroy off a catwalk and right into an electric furnace. The body was vaporised upon impact. Apparently, it wasn’t the first time a worker had been disposed of in this way.

Avenger without a grave

However, a sort of molten metallic golem eventually arose. It was based on the metal that had been in the crucible where Conroy died. The Uru metallic chip was readily visible on its palm.

Inferno later reached Vince Paretta despite the efforts of the full Avengers roster. However, Captain America (Steve Rogers) convinced the silent creature that Paretta would be judged.

Haunted by Conroy’s memories, the creature walked into the Monongahela river. It was never seen again. It is possible that the water “extinguished” it and made it inert.

Legion of the Unliving

In 1992, the Grim Reaper (Eric Williams) summoned a Legion of the Unliving. One of its members, a gaunt creature of heated metal, was identified as both Inferno and Joseph Conroy. It fought Crystal (Crystalia Amaquelin Maximoff).

However, the members of most Legions of the Unliving aren’t thought to be the actual spirits of the persons they represent.

Inferno is a humanoid composed of molten metal. It is red-hot but generally seems solid. Howbeit, some bullets passed right through it as if it were a liquid. It moves at the speed of a briskly walking man.

Inferno completely ignored everything that the Avengers threw at him, including Wonder Man’s punches. It seemed about as strong as Wonder Man, meaning “Class 100” strength.

Inferno could also reliably hit him. This is notable since, while Wonder Man wasn’t as experienced a fighter back then, he’s fast.

If an opponent is out of reach, Inferno can shoot them with a jet of molten metal. Somebody who is able to withstand this will still find themselves encased in a steel gangue.

It can also briefly glow with the heat of a furnace before returning to its normal temperature. 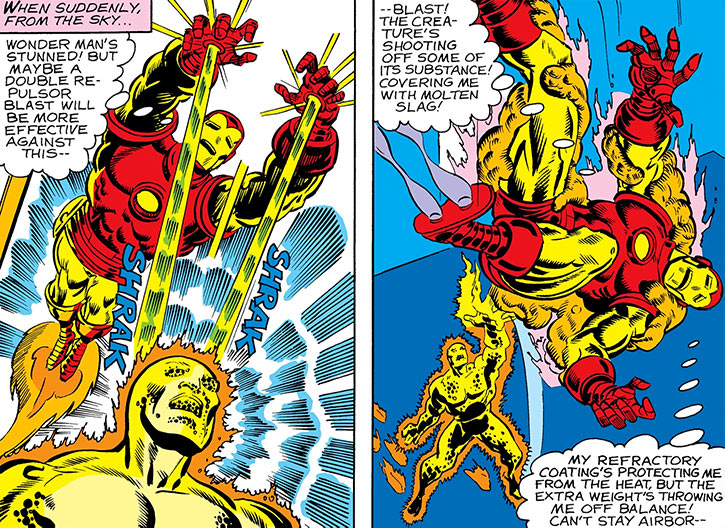 Furthermore, it had the ability to drain energy (such as electricity), then return it as an explosion centred on itself. Inferno might be able to do that with other kinds of EM energies, but this power was likely based on Mjolnir’s ability to manipulate lightning.

The animating principle behind Inferno’s existence is presumably Asgardian  magic. A powerful magician such as Loki or the Enchantress might thus be able to manipulate the creature’s dweomer .

Inferno doesn’t speak, and his memories of Joseph Conroy’s life seem dim. It was determined to avenge Conroy, but Captain America’s sheer presence could convince even this unrelenting animation to let Paretta live.

Inferno could design crude strategies, such as overturning a trolley to delay the Avengers by forcing them to rescue the persons aboard. But it had little understanding of the world, such as the fact that it was putting innocent lives at risk by so doing.

Inferno felt haunted by what little memories it had. Since the creature wasn’t seen again, it is possible that the emotional charge of Conroy’s memories faded over time.

Conroy seemed to be an ordinary steel worker. He loved his family, and showed courage when threatened.

Too close to Prometheus (Curt Calhoun), if yinz ask me.

The BODY is extremely high since Inferno seems to be a low-HP creature. The EV/RV ratio in DCH is based on the assumption of most high-RV characters (like Superman) also having ample Hero Points. This isn’t the case here, so Inferno’s score needs to be highballed to compensate for the lack of LDD and RV boosting.

The scores assume that none of the Avengers were spending significant HPs, which matches the action. Most of the small HP expenditures were to protect bystanders.

Inferno was mostly doing Planned Knockbacks against Wonder Man to keep him at bay. 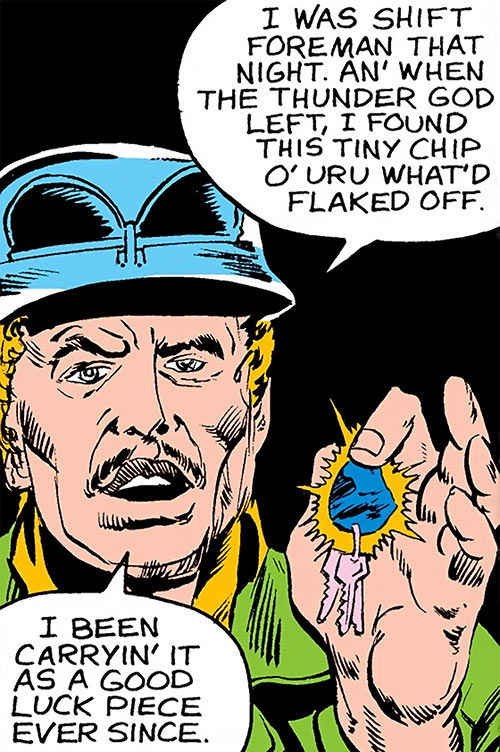