Ingrid Weiss is superhumanly fast, agile, strong and tough. She can thrash Tom Strong himself in hand to hand combat with relative ease.

Weiss will survive huge explosions, collapsing buildings and the like with ease – or walk through raging infernos.

She enjoys showing off her prowess and grace by moving in a highly acrobatic manner.

It is unclear whether she is immortal or has merely extremely slowed aging. But she didn’t seem to have aged a day between 1945 and 2000, making her practically immortal and eternally young.

Ingrid Weiss is the result of a project under the Third Reich to create an ubermensch. Or, in this case, an uberfrau. The exact nature of the experiment behind Weiss is unclear, but she has referred to selective breeding and being raised in inhuman circumstances, much like Tom Strong.

Strong and Weiss had their first encounter in Berlin in 1945. Tom Strong was scouting way ahead of Allied forces and slightly ahead of Soviet forces. He was captured by Weiss, and rendered unconscious. Weiss’ plan was to mate with Strong in order to give birth to the first of a bright, perfect, Aryan race of supermen.

Although she completely failed to convince Strong, she sampled semen from him while he was unconscious. Strong escaped his bonds after waking up, and both combatants were separated in the explosion of the building they were in. Weiss was half-heartedly believed dead.

There were apparently no further confrontation between Weiss (who had of course escaped Berlin unharmed) and Strong until 2000. In 1990, she used Strong’s semen to impregnate herself, and had a son.

By 2000, Weiss had enough resources to own a small flying aircraft carrier, complete with half a squadron of WWII-style fighter-bombers. She also was allied with world-class science villain Paul Saveen to take her revenge on Strong.

During that case, Strong met his son, named Albrecht – then about 10. It was also discovered that “Saveen” was an impostor. He was actually a low-class shape changing criminal.

Weiss chose to leave since she had been duped by the false Saveen. Tahlua chose to spare her life when Weiss asked not to be killed in front of her son.

Weiss is brain-stoppingly beautiful and shapely, and a big fun of leathers-and-Nazi kinky outfits.

For her vehicles and headquarters she will go for lots of blacks and reds, with swastikas, monumental architecture and bonfires symbolising the eternal flame of Nazism.

Weiss is very much the “evil haughty noblewoman” type, with lots of “cinematic Nazi villain” added in. She’s proud and domineering, and uses all the German words you know in her speech when speaking English.

Weiss is deeply racist and believe that Aryans should hold utter power over “inferior” forms of humanity. She even regretted that Tom Strong had brown, rather than blond, hair.

Being a cinematic Nazi, Weiss does not believe that women can achieve greatness by themselves – even when they are as powerful as she is. She sees herself more as the mother of a new, perfect race than a stand-alone, despite being justifiably very confident in her abilities.

Thus, she is very attached to her son and is a loving mother, despite having raised Albrecht to fully embrace her hateful racist creed.

“How dare you touch me with the hands that have touched your Black whore ?”

DC does not really have big, recurring Nazi villains like the Red Skull, Strucker or the Hate-Monger, does it ? No, Captain Nazi doesn’t really count.

However her powers are very close to those of the Übermensch. So they could be the results of the same experiment – and probably brother and sister.

This would have forced her to look for Iron Munroe in order to start that new race of superhumans, making her a Young All Stars enemy and occasional member of Axis Amerika.

Drawbacks:
SIA to pride, SIA to Nazi and racist creed.

All Aryan Angels are young, pretty women with blonde hair. The uniform of those luftwaffe lovelies if mostly based on an SS uniform, but with Tyrol shorts or black mini-skirts – it is important that legs stay bare, and black leather boots are of course a must. All swastika girls speak some degree of German.

The idea here is to be over the top in Z-movie “attack of the nazi bimbos” fashion. 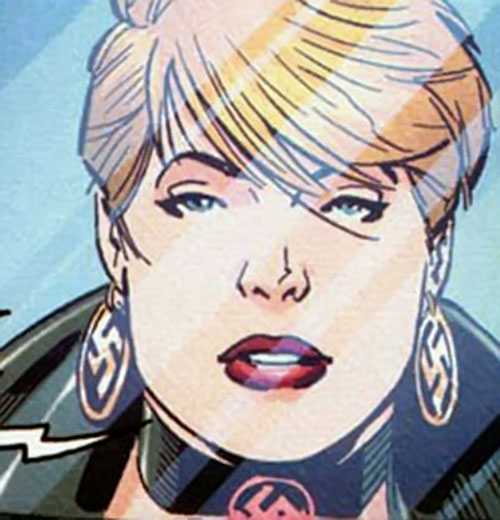 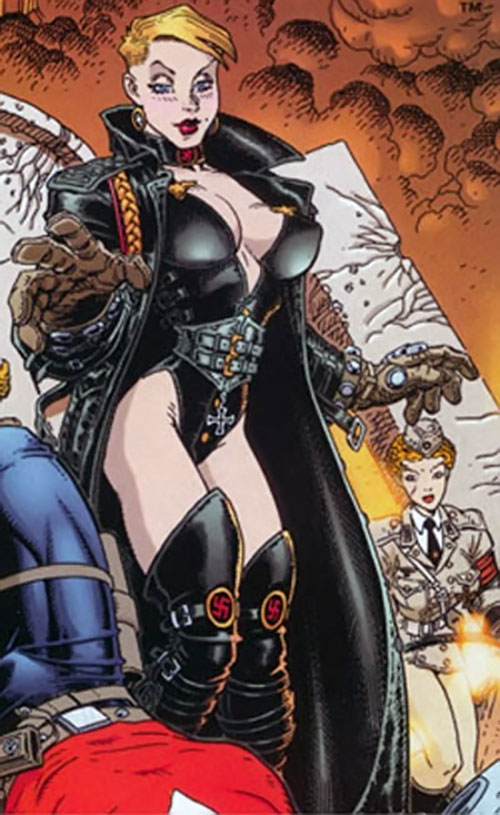