FWIW Ingvie’s name is of Indonesian origin (since Citrine population seems to originally be from India and/or Indonesia), though by phonetic coincidence it’s also a Nordic first name.

Ingvie primarily trained as an archer with the House of Citrine’s military. These are organised along traditional gender lines, with women being skirmisher-style archers with a medium bow and light leather armour.

Only light archers and medium infantry (mostly swordsmen in scale armour) were seen. As a minor house it seems likely that Citrine doesn’t have a large military with varied units.

Other archers of the House of Citrine seemed to have some heroic fantasy ranger-type skills such as tracking and forest running. But that likely was more a product of being rural commoners with a good knowledge of their native land than military training.

While she’s no Hawkeye, Ingvie is a quick, accurate bowwoman. She can operate in the thick of a battle as long as she has melee troops to run interference and give her some space. She is also trained as a swordswoman, and seemed every bit as competent fighting this way as with her bow.

Ingvie normally has a stout dagger sheathed on her belt. She will also have a broadsword instead if expecting battle.

Ingvie seems strong for her size. It is possible that, like Princess Amaya, the blood power of her House also augments her general physical abilities. She and Amaya could carry a large soldier in scale mail, using a makeshift stretcher, without much apparent effort.

The memory of House Citrine

As a House of Citrine noble, her dormant power is perfect recall. Beyond her own experiences, she was made to study a bevy of useful information such as the pacts and traditions of all noble houses, or the floor plans of their main palaces.

As the Lady of House Citrine, Ingvie has access to the full memories of all her predecessors. It goes all the way back to the War of the Eclipse thousands of years ago – and possibly before. This presumably means that she knows all languages known on Nilaa, but that wasn’t demonstrated.

She also knows a lot about the various realms of Nilaa, but this experience might be from several generations ago.

As the Lady of the house she can also enchant prepared citrines to turn them into data management devices. The known examples of such include gems that could record speech (and possibly “video”). Another example was a gem that could telepathically impart a knowledge of “all languages” (presumably all Nilaan languages) in seconds.

Princess Ingvie is the daughter of Lady Senshe of the House of Citrine. The House’s traditional role is to archive and manage data, particularly historical information and protocol issues, for the world of Nilaa.

This is likely a result of the House of Citrine’s lineage power, which involves total recall. They can also enchant prepared citrines to have them record, store and deliver knowledge.

As the eldest of Lady Senshe’s two children, Ingvie would logically succeed her mother as Lady of the house and head archivist. However, she found studying boring, and wanted to be in the field and have adventures.

An agreement was reached where she renounced the full blood power of the House of Citrine. The title and power would instead pass from her mum to her little brother Darjeel, leaving Ingvie free to join the Citrine military.

It is likely that Ingvie was trained in part by Elzere, a hulking elite warrior serving the House of Citrine.

By age 17 Ingvie seemed to be a sort of lieutenant, albeit one answering directly to the Lady of the House. She apparently had her own mixed unit entrusted with sensitive missions – though it was peacetime stuff. Citrine can put up a good fight, but they do not seem to be terribly warlike.

Nevertheless, 17-year old Ingvie had been in multiple skirmishes and had already killed people.

Graciel had to flee to Earth for 17 years as her bloodthirsty sister Mordiel took power. But Lady Senshe of the House of Citrine had agreed to help Graciel return and support her against Mordiel.

When the agreed-upon time for Graciel’s return came, Senshe sent her daughter and her unit to an isolated ruin. There they could open their end of Graciel’s transdimensional  gateway. However, Mordiel had correctly calculated Graciel’s options, and had mercenary troops watching likely entry points.

Seconds after Graciel and her daughter Amaya warped in, the Citrine troops found themselves under attack by a larger force of Hunter mercenaries. While they fought hard, Ingvie and her troops would have been overwhelmed. But Graciel used her Amethyst blood power to slay the remaining attackers.

Knowing that Mordiel would be there soon, the survivors left ASAP with their wounded and their two House of Amethyst guests.

Ingvie soon became a close friend of the Princess Amaya of the House of Amethyst. She greatly helped Amaya familiarise herself with Nilaa. Though they were the same age Amy knew nothing about this world, whereas Ingvie benefited from perfect recall and extensive studies.

During the months that followed the return of Lady Graciel, Ingvie and Amaya were inseparable.

Millennia before, Nilaa had been narrowly survived the rise of the Lord Kaala, the first and last child ever born of a House of Diamond/House of Onyx pairing. Genocidal and immensely powerful, the so-called Eclipso was defeated by Lady Chandra of the House of Amethyst. She imprisoned him in his own, unique black diamond of power.

The diamond couldn’t be destroyed. Shandra had to dump it through a portal on Earth, as Nilaa wouldn’t survive a return of Eclipso/Kaala. However, Earth occultist John Constantine used the portal activated by Lady Graciel in 2012 to send Eclipso back home to Nilaa and get rid of him.

Within minutes of his return, Eclipso murdered the Lady Senshe. The power was thus suddenly transferred to Princess Ingvie. This incapacitated her for a while as she dealt with the massive data dump from the memories of her predecessors.

At this point her brother Darjeel was only 15, and thus too young to receive the lineage power. This meant that Ingvie had to assume leadership of the house. Presumably, she will be able to abdicate when Darjeel is 17 to have him become Lord Darjeel of the House of Citrine.

As soon as Lady Ingvie recovered from the blood power transfer, she joined her friend Princess Amaya and her allies as they fought to stop Eclipso before the next eclipse.

Ingvie and her retainer Elzere fought at the side of Princess Amaya as she faced Eclipso on the steps to the Amethyst palace.

Ingvie looks a smidgen less Indian-ish and more African-ish than other Citrine nobles. She might thus have some Turquoise ancestry… or maybe it’s just her hairstyle. This cornrows-and-queues hairstyle seems to be the regulation cut for Citrine archers.

Apparently, dying this hairdo dark orange like the royals’ is popular among female soldiers. In Ingvie’s case though it’s her natural colour.

Her hair is naturally straight – there are still little unbraided locks in front of her ears.

Ingvie likes action and adventure, and is curious about new and unusual things. She’s very different from her well-meaning but hidebound mother. A lifetime of study and politics like Senshe’s would very much go against Ingvie’s character.

The Princess has no interest in ancient history, though she grudgingly studied matters of relevance to the present situation.

However, Ingvie seems more interested in a non-political aspect – being an ally of Amaya is where the action is and stuff happens. She also seems to appreciate having a peer, Amaya being a fellow free-spirited 17-year-old senior noblewoman.

As the series ends Ingvie is still working to integrate the memories of her ancestors, since there are thousands of years of life experience. Her memory seems to be structured using a computer-like access-on-demand model so it’s not too bad.

But on the other hand the memories come with their full emotional weight. So remembering about times of great misery like the Eclipse War is quite unpleasant.

“My mother is a traditionalist. She has a long list of rules from the old days and Powers help you if you stray from them.”

Ingvie: “I’m surprised you didn’t puke. The first time I had to kill someone, I puked all over.”
Amaya (desperately trying not to vomit): “Not helping, Ingvie.”

“I’m not going to hide in a corner afraid of shadows. We’ll take down this demon together.”

Connections:
Lady Amaya of the House of Amethyst (High).

Drawbacks:
Dependent (Prince Darjeel), Misc.: Ingvie doesn’t speak English, but that has no consequences in her setting.

Due to the lack of material, the game stats are speculative. 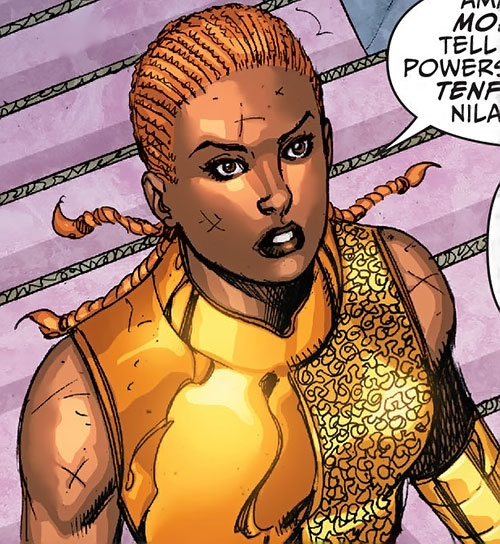