But he does make for a simple yet powerful opponents in role-playing games. And what sort of weirdo wouldn’t want to deliver grandiose monologue in a booming voice while pretending to be a hulking cockroach ?

The Inheritor is monstrously strong and tough, as long as he gets exposed to new radioactive sources. At his peak he can handle a brawl with the Hulk, and even the green titan will find it gruelling to knock the Inheritor out due to his sheer resiliency. The Inheritor even claimed the Hulk did not hurt him, but he was bragging.

The Inheritor can cling to walls like a roach can. And he may have other, undemonstrated insect-like powers.

The Inheritor is one of the more unusual New Men uplifted  by the High Evolutionary. The experiment was based on an ordinary bladehandle cockroach.

But the experience failed. The roach-man evidenced an odd belief in manifest destiny. According to his racial memories, roach species were always intended to dominate the Earth. Thus, he refused to bow to the current masters – humanity. Instead he claimed that his kind would inherit the planet.

(Cockroaches inheriting the Earth was a recurrent Cold War motif, as it was popularly believed that they would be the main life form left after a nuclear war. As to the Christian metaphor (the creature rejected for refusing to bow to man, and declared evil) there’s a *lot* of it in early High Evolutionary and Adam Warlock stories. See the Man-Beast’s profile for more.)

The High Evolutionary eventually scrapped the experiment. He put the roach-man in a rocket and shot it in orbit. There, the lack of radiation would eventually devolve the uplifted insect back to its original size, shape and mentality. However, capricious fate resulted in a stray meteors hitting the space craft, which crashed in the USA.

(Yes, the idea of having lower amounts of radiation beyond the mesosphere  makes no sense. Just focus on the super-cockroach-Lucifer, please.)

Easily surviving the crash, the roach-man was confused. The devolution caused by radiation starvation had already started and his mentality was weakened. Sensing he was on a world he owned and that he needed more radiation to re-evolve himself to his peak, he started wandering around in search of such energies. On his way he murdered two hunters, sensing that he hated humans.

The monster gradually recovered his memories, and was pretty much evolved all the way back after he attacked an USAF truck carrying military isotopes. Guessing he could get more radioactive junk from where the truck came from, the self-named Inheritor attacked the newly-built Hulkbusters base.

At this stage the forces headed by General “Thunderbolt” Ross lacked any special equipment. Thus they were handed a crushing defeat by the Inheritor, who could ignore anything they threw at him.

The one specialised facility on the new base was a special cell built to hold the Hulk. The jade giant had been captured the day before, and the cell had succeeded in holding him and turn him back into Banner. Predictably, the Inheritor’s attack wrecked everything. Soon, Banner was pinned under rubble and the merciless blattodea was threatening Betty Ross.

The Inheritor exposed himself to more radiation… which also reached Banner. The Hulk soon attacked to protect Betty. Yet the clash between the gamma  mutate  and “shiny-skin” remained inconclusive.

Eventually, the Inheritor exposed himself to what he believed was more radiation. It actually was a radiation-absorbing device designed by Banner to neutralise the Hulk. The uplift was swiftly devolved into an ordinary roach, which the confused Hulk threw away.

The Inheritor is as smart as he is ruthless. And as you can see from the quotes, he speaks in a grandiose manner.

He wants to annihilate humanity so he and his kind can inherit the Earth. The Inheritor is convinced that this is their racial destiny after 300 million years of waiting. He is obsessed with this destiny. As a result, he will do anything he can to bring it on whilst maintaining his necessary exposure to radiation.

“Home. I need no memory to tell me. That will come in time —- I sense it, I feel it. This is the world meant to be mine. It is my legacy, that which I am destined to inherit. That which I must go forth to claim. The craft which carried me explodes… and what matter ! The Inheritor has come home !”

“I see you and it comes to me what you are… you are humans. And I know how you must be dealt with. You are the enemy that screams within me — shrilly, instinctively ! Your kind delays my inheritance of this Earth.”

“I shall find men ! Now I truly understand why they are my enemies… They are unworthy to rule this world. Why should I wait to inherit the Earth — wait for their extinction to come as others of my kind have done ? The Inheritor has the power to bring it on !”

“I am he who shall bestride this Earth long after your kind has vanished, woman… I AM THE INHERITOR !”

“You battle well, green-hued gargoyle — you have driven me from the radiation I need !”

He could easily have been a Superman villain, though it’s best to keep him as a Cold War era type. He could be the result of an experiment by the pre-Crisis Brainiac.

Drawbacks:
Loss Vulnerability (see below), Strange Appearance, SIA of humans (and possibly other previous “masters of the Earth” such as dinosaurs), Misc.: The Inheritor is fiercely radioactive, but gets no points for this given his nature and personality.

The Inheritor is very dependent on being exposed to an unclear mix of hard radiation to maintain its super-insectile power. The statistics above represent his might when he has recently bathed in unleashed radioactivity.

How much the Inheritor depends on radioactivity is unclear. I’d assume he can go 24 hours without it. After that point he loses 1 AP of STR every 30mn (or every five Phases of strong exertion, such as combat).

Once this starts, none of the Inheritor’s Attributes or Power can rank above his STR. They will go down as that ceiling reaches them. At 0, he fully devolves into a cockroach.

Absorbing the radiation away from the Inheritor is done against a AV of 06 and a RV equal to its current STR. Any RAPs get deducted from its STR as per the paragraph above.

The Inheritor seemingly has the proportional tenaciousness of a roach — hence the Conditional Soaking Advantage. He keeps most if not all of his HPs for LDD. 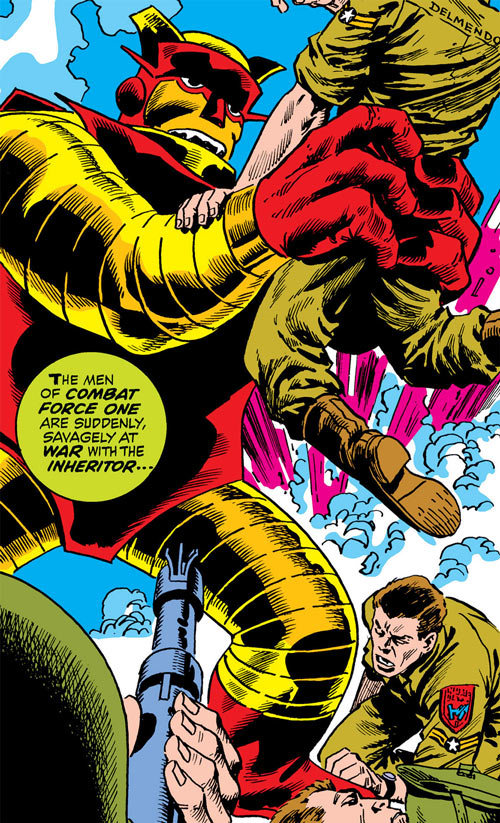 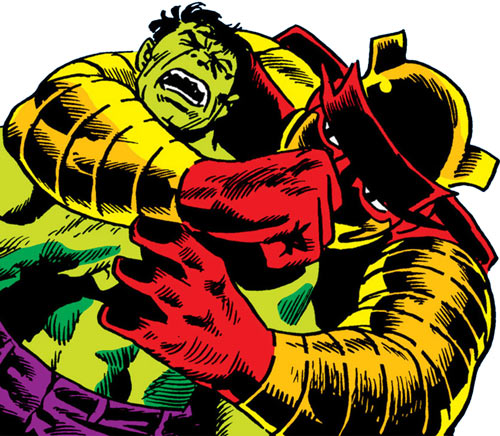