“We are a people of miracles.”
– Triton of the Inhumans.

The Inhumans are a pulpsCheap, often lurid novels in the US during the 1920s and 1930s-style Ancient And Superior Hidden Civilisation. But with much more Jack Kirby  in it.

They have been a significant feature in the Marvel Comics universe since 1965.

This article summarises the basics. So the individual Inhuman character profiles do not have to explain the same things over and again.

During the 2010s, Marvel pushed the Inhumans. This often was interpreted as creating a new stable of characters to replace the X-Men. Since the potentially lucrative cinematic rights for the mutants weren’t held by Marvel back then.

I haven’t read *all* of said 2010s material. So it’s possible some bits are missing, that should be in this article.

My immediate goal is more to lay the groundwork for revising 1965-1984 Inhuman entries.

Being from the 1960s, the Inhumans use super-dated, pop versions of genetics and evolution. It’s one of their core themes, perhaps even more so than with mutants à la X-Men.

Obviously, most of the concepts involved would make any geneticist, biologist, etc. utter the Wilhelm Scream  . 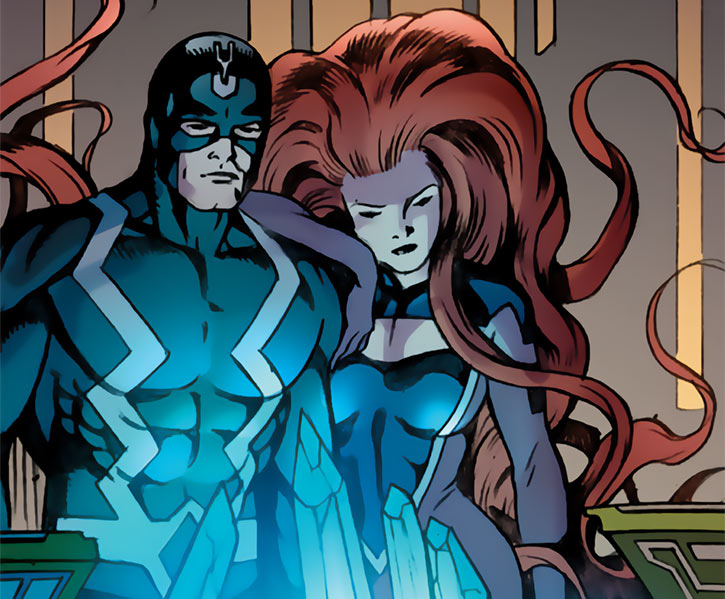 The accounts about ancient Inhuman history present a wealth of contradictions. This may be because historically, the Inhumans were seen as C-list characters. They do not seem to have been as closely managed as A-list IP.

Our articles attempt to reconcile as many of the contradictions as possible.

To keep it simple, the stock assumption will be that Inhuman History is full of self-serving lies. This is a theme that has been used by Marvel in several Inhuman stories.

One key tradition is called “turning your back”. Once an Inhuman ruler declares that their people are “turning their back” upon something, it officially never existed. All records are erased, and all subjects agree it never was. 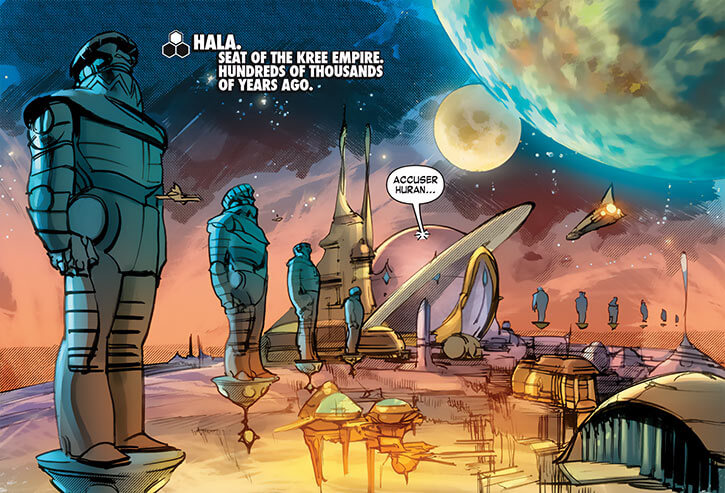 Ancient Hala, homeworld of the Kree.

The origin of the Inhumans lies with unrelated space aliens, the Kree.

In their far past, they were endowed with potential for super-powers by the cosmic Progenitors. This was done through a transformative agent called the Primagen.

(The Primagen is in turn derived from a Progenitor energy source called the Prima Materia. But let’s keep our focus on the Inhumans.)

To remedy this, Kree leader the Supreme Intelligence launched long-term and/or cosmic-scale plans. Many involved the manipulation of other species.

25,000 or 20,000 years ago, Kree scientific task forces experimented on selected populations from hundreds of species. For each, a transformative agent comparable to the Primagen was located.

(Royals #5 states that “thousands” were selected. Though the statement is ambiguous, it likely means “thousands of individuals, total” rather than “groups from thousands of species”.)

One such group was Humans, from Earth. Their transformative agent was mist from ultra-rare Terrigen Crystals.

The process was thus called Terrigenesis. The general, not agent-specific term for these transformations is “Metagenesis”.

However, other stories state or suggest markedly older dates.

A close reading of the 2019 History of the Marvel Universe suggests that the Inhumans’ creation took place more than 30,000 years ago.

The more reasonable hypothesis might thus be that the experiments that created the Inhumans and others took place 40-to-50,000 years ago.

I suspect that “25K years ago” is an official Inhuman date. With the first 15+K years having been erased from the records for political reasons.

Ain’t enough Ekova on this site, I say. And we can always imagine that the lyrics on most Ekova tunes are in Kree.

https://www.youtube.com/watch?v=AM-vp3TFIfc
Available on Amazon , but as CDs.

Officially, these alien experimental groups were the seed for military auxiliaries. They would, in time, become super-soldiers reinforcing Kree troops.

In reality, this seems to have been a cover for exploring ways Metagenesis could be applied anew to the Kree species.

All subjects were implanted with inheritable group memories. As a consequence, they developed compatible mythologies, giving them common cultural ground. This genetic memories package also included :

The program was a rousing success. Except of course on the ethical front.

In fact, it was too much of a success. The Supreme Intelligence came to realise that, among the projected super-soldiers, a powerhouse would arise and kill him.

(FF #7 has an ambiguous caption about that. My interpretation is that the Supreme Intelligence knew for at least 300,000 years about the broad nature of the person who would destroy him. Presumably due to Kree religious prophecies.
Thus, upon learning about the success of the Metagenesis experiments, the S.I. deduced that this long-anticipated slayer would likely be from a Metagenesis experimental group).

The Supreme Intelligence abruptly ordered the program terminated. His Accusers elite guard terminated the scientists, as well as all known test subjects. 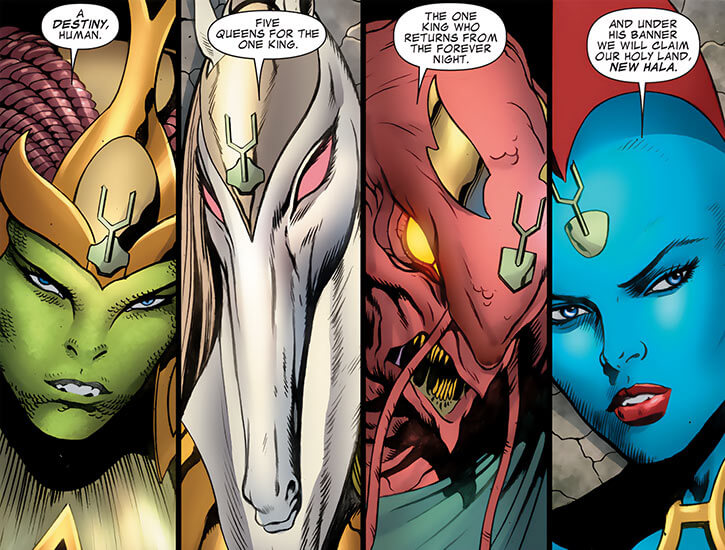 But an horrified project member had just enough time to delete 6% of the data about the experiment sites. This was a last-ditch attempt at protecting his life’s work, by hiding his subjects from the S.I. and his Accusers.

Furthermore, the 2019 History of the Marvel Universe clearly shows the face of an Elan when discussing this. They might thus be the sixth, unknown-to-the-others, species. The best-known member of the Elan species is the Infant Terrible (now known as the Delinquent).

These five known communities are sometimes called the “Universal Inhumans”. Which strikes me as a tad anthropocentric, but anyway.

The Incentaurians and the Inkymellians apparently have a long history of benign collaboration.

It is possible that the Kree research teams monitoring those “lost” subjects also survived the purge.

One account states that the Kree started experimenting on Humans after capturing an Eternal of Earth. They were fascinated by this man’s genetics.

Eternals are another Ancient And Superior Hidden Civilisation. They have been enhanced by cosmic gods the Celestials to manipulate cosmic energy.

The Kree used to have an Eternal offshoot, but only one — Ultimus — is known to survive.

Our proposed No-Prize HypothesisA made-up explanation to plug a plot hole to reconcile the Eternal angle with the rest of the data :

However, even this hypothesis cannot bridge a chronological gap.

The exile of the Eternals is stated to have occurred about 750,000 years ago. The inspecies are created 700+K years later. This span is more than three times the entire history of homo sapiens sapiens.

To summarize – the account about Eternal inspiration does make sense. But *something* has to be garbled in the information we have. 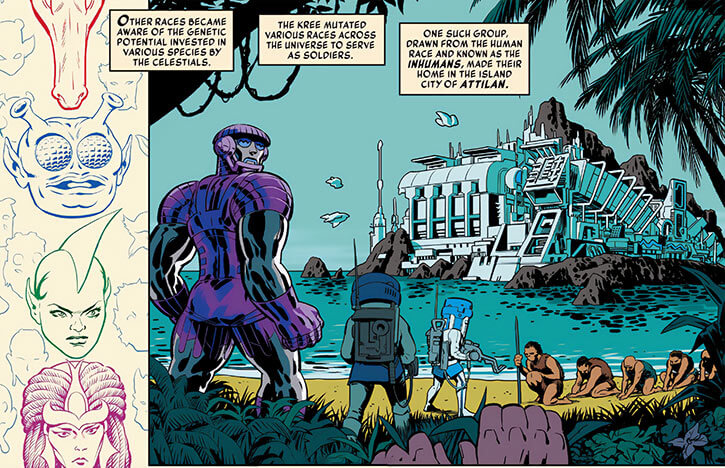 Inhumans Vol. 3 #2 shows that Metagenesis — or at least Terrigenesis — turns each subject into a replica of a semi-random space alien species. This comes complete with all this species’ abilities.

This means that “inspecies” could infiltrate other planets. Kree leader Ronan the Accuser compared this to the shape-changing Skrulls’ infiltration abilities.

TMK this angle was never elaborated upon.

That Terrigenesis would just happen to turn Inhumans into replicas of far-flung species may seem odd. But one should keep in mind that the Primagen was developed by the Progenitors.

This cosmic species apparently sought to emulate (or compete with) the far more powerful Celestials. They had vast data stores about life forms throughout the universe.

The Inhumans, prior to Ronan’s statement, considered that the output of Terrigenesis on an ideal subject was guided by their conscious and subconscious yearnings. And, in some unfortunate cases, their nightmares.

At first glance, this may simply have been a religious belief. Especially since it seems incompatible with the “alien species mimicry” explanation.

However, one could compare Terrigenesis to homo superior mutations. These are also thought to reflect, at least in part, the person’s mind.

The Progenitors’ Primagen may have been an attempt to replicate this process. Meaning that the Inhuman undergoing Terrigenesis might subconsciously pick among the vast catalogue of phenotypes encoded within the transformative agent.