The main comedic element was making fun of the Injustice Leaguers because most were mentally ill. I’m sure it looked like a swell idea at the time.

As with most team profiles, this article summarises the team’s career. This is so we don’t have to repeat the information in its members’ individual profiles.

Purpose:
Unclear even to its members. But earning some money to avoid utter destitution has been a recurrent objective, so there’s that.

Modus Operandi:
Amateurism, mostly. If you imagine the sort of plan children would come up after watching a few 1980s crime movies, you’ll prolly be spot on mate.

Extent of operations:
Wherever they may roam, as the song goes.

Bases of Operations:
For a bit they had a prefab base in the middle of nowhere, Antarctica, Antarctica.

Major Funding:
They once received a month’s wages from the Justice League. Have you ? No. So don’t diss it. There were good benefits too.

Known allies:
The Scarlet Skier, but briefly and against his better judgement. Which isn’t saying much, yeah. 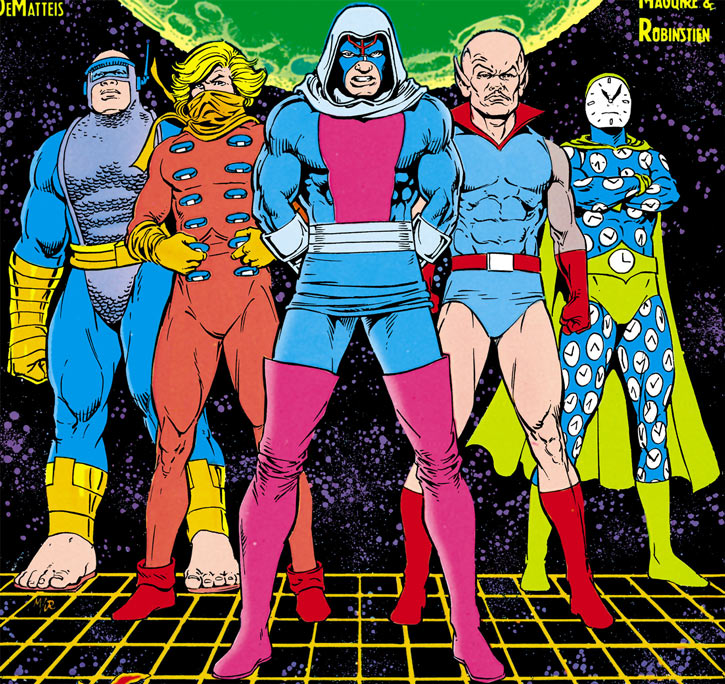 Organizational structure:
Major Disaster is “ leader”. Why are the quote marks green ? Because they’re SCARE QUOTES. Ah ah, I slew it rite ?

G’Nort was a member of Justice League Antarctica, so he arguably counts. I’m not sure who would waste their time arguing either way, though. And philosophically speaking, can G’Nort ever be said to count anyway ? I’d argue he doesn’t, because for starters he can’t. ANYWAY.

And for the briefest time they had a Thanagarian spaceship they couldn’t control.

Disaster is the name

In 1989, Major Disaster recruited a “team”. The other members were Cluemaster, Big Sir, Multi-Man and Clock King. They were “helped” by a technical expert. Who was named Bruce, as has historically been the case of several tech experts. Especially Aussies.

This lot was bloody useless, and they knew it. But after the Invasion , they attempted to salvage a crashed Thanagarian warship. Though Bruce eventually got it to fly, they were easily brought down and arrested by Green Lantern (Guy Gardner).

They did not actually go to prison through. They hadn’t done anything illegal, except maybe on Thanagar.

The Injustice League briefly tried to commit crimes in Paris, without any success. They even ran in the newly-established Justice League Europe, headquartered on the City of Lights (and Dog Faeces on Sidewalks).

They were promptly deported to the US, where they promptly disbanded. So at least that was prompt.

Antarctica is the aim

In 1990, the Injustice League randomly met at the unemployment office. Major Disaster strong-armed them into reuniting, and they tried to steal a diamond in New York City. By sheer bad luck they ran into terrorists holding a crowd at gunpoint. The Injustice League saved the crowd without quite meaning it, and were hailed as (very minor) heroes. 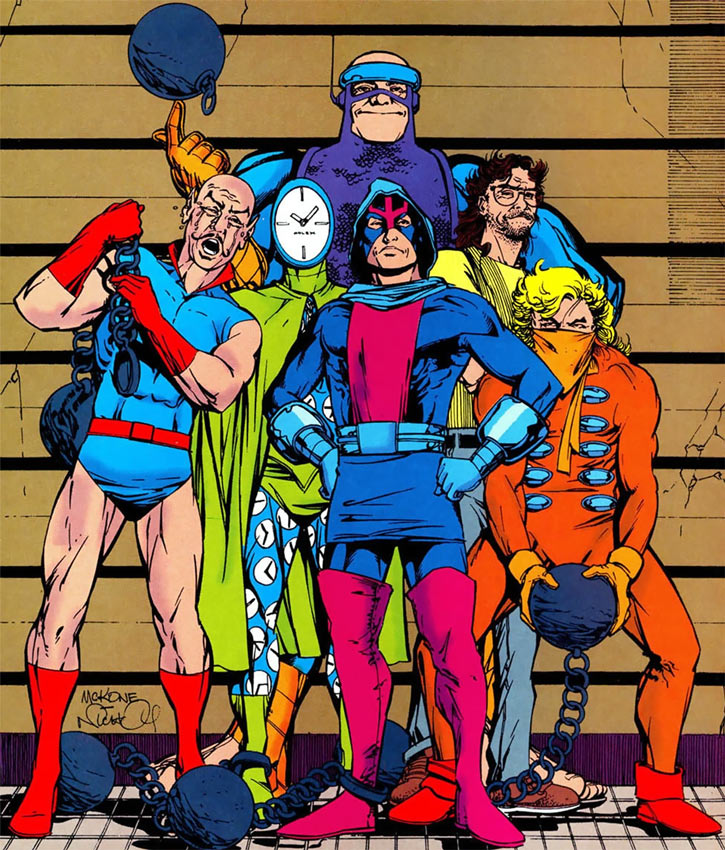 Looking for an income, Major Disaster petitioned for the Injustice League to become employees of the Justice League. Nobody bought it.

However, League director Maxwell Lord saw an opportunity to get rid of their most calamitous member, Green Lantern G’nort. Thus was Justice League Antarctica formed, with G’nort, Cluemaster, Major Disaster and the rest.

Nevertheless, they ran into major trouble. A secret lab had been all too successful in creating an army of killer penguins by crossing them with piranhas. And now the fanged fowls of ferocity were loose.

The J.L.Ant. nearly died, but were rescued in the nick of time. The Justice League renounced its Antarctic scheme. This sad bunch disbanded.

Lord is the surname

In 1991, the Injustice League was very much out of money. They were still mostly interested in being heroes, but there was no dough in it. And they presumably did not achieve a single heroic thing. It would seem that they eventually had to have Big Sir (who had won a large sum in a TV show) pay for their food. 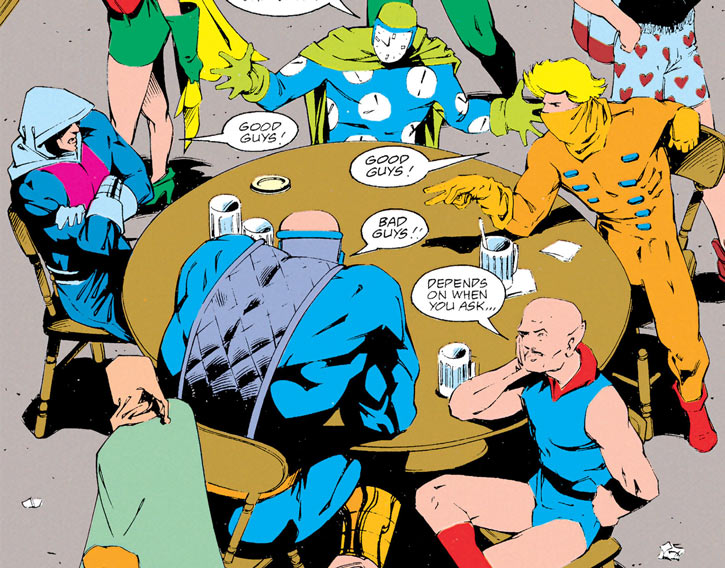 As a halfway measure, they decided to rob megarich sinister cult leader Minister Sun, and give to the poor. Namely themselves. The capper was handled with a mix of brazen incompetence and relentlessly horribad luck. They did get out alive and even managed to steal a gold bar from Minister Sun. However, most of it had to go to pay off Cluemaster’s monstrous accrued traffic fines.

When Max Lord awoke from his coma, the former Justice League Antarctica was invited at his welcome back party. Unfortunately, this meant that they were on hand when Despero attacked. Major Disaster wrecked Time Square as he tried to help. As the Extremists attacked the Justice League America headquarters, the Injustice League did its best to sneak away in terror.

Sonar is whom came

In 1993, the Injustice League was among the pawns serving Sonar during his takeover of Russia. They were part of a small army charged with stopping the Justice Leagues, with most members being sonically hypnotised.

When Sonar was defeated by Sue and Ralph Dibny, the Injustice League dauntlessly surrendered. Whether they were there for money or through mind control is unclear. But sonic mind control seems more likely.

Suicide is the game

In 2001, Major Disaster “volunteered” the former members of the Injustice league. They were all in jail at that point. The lot was thus strong-armed into a Suicide Squad mission. It was remotely supervised by a man who seemed to be Horace “Bulldozer” Nichols, formerly of Sergeant Rock’s Easy Company. 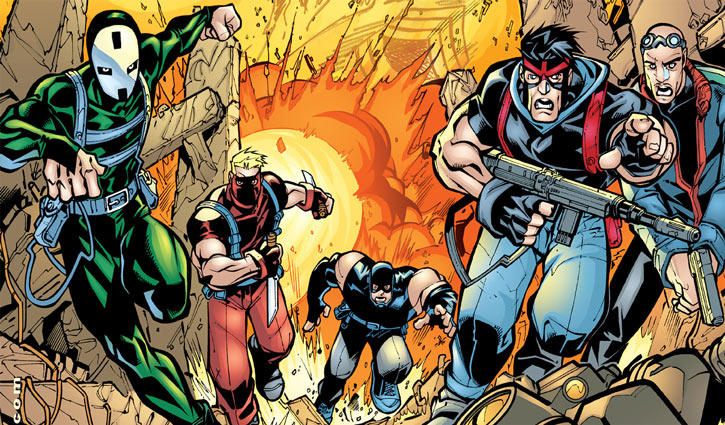 Bulldozer noted that there weren’t any records of the Injustice League serving with the Justice League. This might be a small meta-joke about the unclear continuity status of various “bwa-ha-ha era” elements.

The former Injustice League was sent to investigate a likely threat on a small Icelandic island. But it soon became obvious that they lacked the means to conduct this sort of commando work. The entire team was slain, except for Major Disaster.