Purpose:
Knowledge gathering and helping each other.

Modus Operandi:
Their primary operations as a group were initially gathering lost knowledge to protect it from the undeserving (anyone but them).

They also offered support to each other when in trouble. Such as breaking each other out of prison or reassembling their atoms after they’ve been discorporated. They also covertly did similar for unaffiliated super-villains, to throw any observers off the scent).

Following their reformation they worked together on a more standard global domination plan.

Bases of Operations:
The Hellcarrier, mobile.

Organizational structure:
Leader, MODOK (the pair of whom appear to be the leaders of the group).

The Wizard, the Mad Thinker, and Red Ghost as members.

Various others as operatives and junior members. 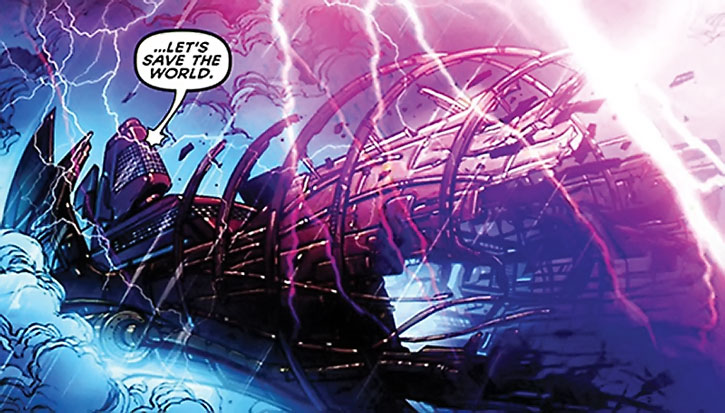 Seeing the benefit in associating with other geniuses for mutual benefit, the Leader approached a number of other super-villains to form the Intelligencia. The goal was to preserve valuable knowledge from those who would squander it. Members would also help each other out when they ran into trouble (imprisoned, discorporated, stuck in another dimension , etc.).

He began by inviting those already comfortable with working in groups, although they were usually leaders. For the initial group he recruited the Wizard, Egghead, the Mad Thinker, and the Red Ghost. Doctor Doom remained an associate, not deigning to accompany them in the field. Still, he offered Latveria as a place to safely store their knowledge.

The Library of Alexandria

One of their main collaborations was on recovering the scattered knowledge from the Library of Alexandria. They covertly took it from remote places such as within the Eternals’ stronghold Olympia, in Antarctica, or in the heart of Wakanda. They replaced their loot with carbon replications, and left without anyone having been aware of their presence.

When Betty Ross was turned into crystal, they created the Cathexis-Ray. This technology could use the Hulk’s gamma  energies to restore her. They also recruited psychiatrist Doctor Leonard Samson with the promise of turning him into a super-hero.

The device succeeded, proving the technology worked. The Intelligencia used some of the drained energy to fulfil their promise, turning Samson into Doc Samson.

When Egghead died facing the Avengers, he was beyond any hope of recovery by the Intelligencia. Since their Temporal Shifter required five genius-level intellects, Leader recruited MODOK as a replacement.

Using information recovered from their gathering the lost Library, the Intelligencia set up a tachyon beam emitter to fire into space and see what would happen. The ultimate result was the appearance of the Beyonder, whose true nature is still a matter of debate. 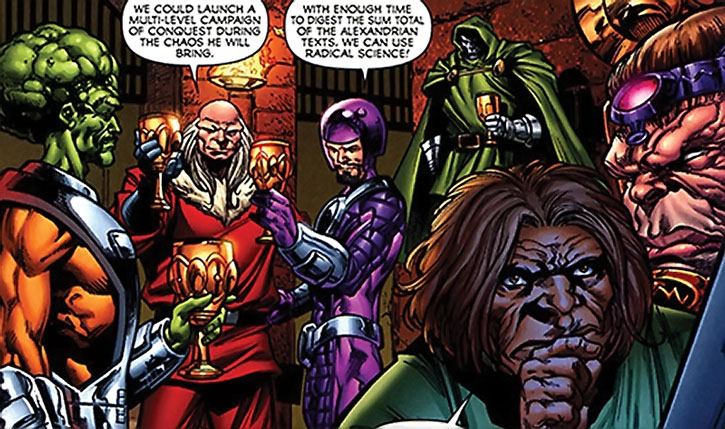 On one foraging expedition to Edwards Air Force base , the Intelligencia found the remains of Betty Ross Banner. The Leader took her with them for later use.

Soon after the Civil War  ripped the super-hero community apart, the Intelligencia recovered the final part of the Library from Atlantis. Returning to Latveria with their prize, they were betrayed by Doom, who believed only he deserved to hold them.

The Leader, realising this meant the end of their organisation, left without bothering to fight for the Library. The Intelligencia disintegrated.

Their dissolution didn’t last long. MODOK approached the Leader but a few months later with a plan to use cosmic and gamma radiation to create their own Hulk. As the plan formulated, they recruited the other members of the Intelligencia.

They also approached General “Thunderbolt” Ross. The Intelligencia offered him the opportunity to fix what he saw as a broken country, and to revive his daughter. He ultimately agreed.

Ross helped recruit Doc Samson to their endeavour. The doctor was now under the control of his more aggressive Samson persona. Samson worked as their agent with government clearance to help keep their plan secret.

During the Hulk’s invasion of Earth with the Warbound, they kidnapped the seriously injured Rick Jones. The Intelligencia healed him and later subjected him to Cathexis device. They used cells from the Abomination, whom Red Hulk killed in the process, to transform Jones into the A-Bomb.

They also took advantage of the situation to take over the satellites Tony Stark was using to neutralise the Hulk. They altered them to drain his gamma radiation for their use with the Cathexis device.

The Red Hulk served as their main field agent for a while. His apparently random attacks paved the way for their plan. For instance, his crashing of a S.H.I.E.L.D. helicarrier allowing them to salvage it and use the “Hellcarrier” as their mobile base. He eventually turned against them, though. They parted company, but the Intelligencia made plans for his interference.

Fall of the Hulks, part 1

Their first step was to neutralise the intellects who could possibly oppose them. But this was hampered when they learned the Red Hulk and Bruce Banner were working together to oppose them. It wasn’t enough to stop them achieving their goal, though. 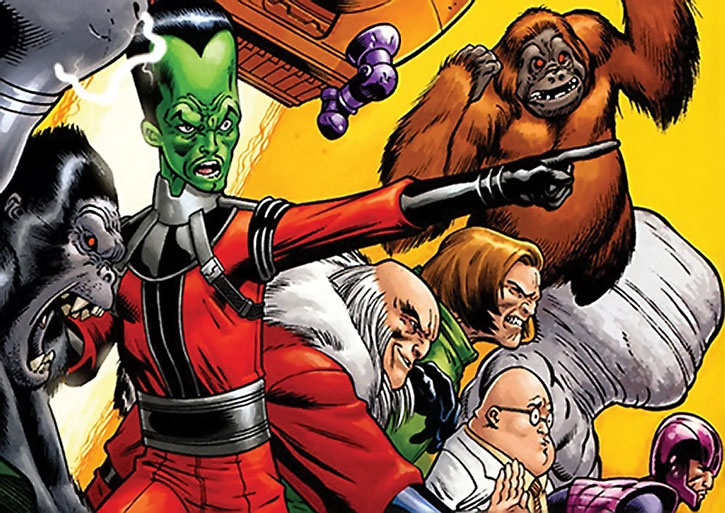 Wizard led his new Frightful Four (Trapster, Klaw, and Lyra (who was recruited when her mother refuses to join)) in an attack on the Fantastic Four. The attackers captured Reed Richards, and left the door to the Negative Zone open to suck the rest of the team in. However, the latter part failed due to the Red Hulk’s intervention.

They then sent the Cosmic Hulk automaton to attack Dr. Doom. He seemed to take it down quickly, but it actually released the radiant neural anesthatiser. This eroded Doom’s intellect and let the android subdue and take him captive.

Fall of the Hulks, part 2

The Red Ghost and his Super-Apes abducted the Black Panther during Storm’s birthday party, leading to the X-Men giving chase. This allowed Kragoff to also capture the Beast. But the Red Hulk intervened, killing Kargoff’s gorilla, Mikhlo.

Enraged, the Red Ghost reached Red Hulk’s heart, damaging it enough to knock him out. But he was unable to kill him. He fled with his prizes, leaving the Red Hulk for the X-Men.

Red She-Hulk’s attempt to kidnap Hank Pym brought her up against the Mighty Avengers, as well as Banner and Skaar. But when more Avengers responded to the emergency, their mistrust of Banner gave her the chance to escape with Pym.

Banner led a force of assembled heroes on attacks against a couple of the Intelligencia’s bases, including their main one onboard the Hellcarrier.

It failed. The Intelligencia had captured the Red Hulk when he tried infiltrating their base. They then used his energies to turn AIMarines into an army of Hulks, then hulk-up the assembled heroes. This left Banner without support and easily captured.

But the plan soon began falling apart due to a number of factors. Banner managed to free himself and the other captive intellects from the artificial reality holding them. They set to work reversing the Cathexis device before it killed the hulked-out heroes.

Lyra was actually working with Banner, having only joined for the opportunity to free Jennifer Walters. She accomplished this goal, and the pair fought Red She-Hulk before helping Skaar and A-Bomb face the AIMarines and hulked-out heroes. 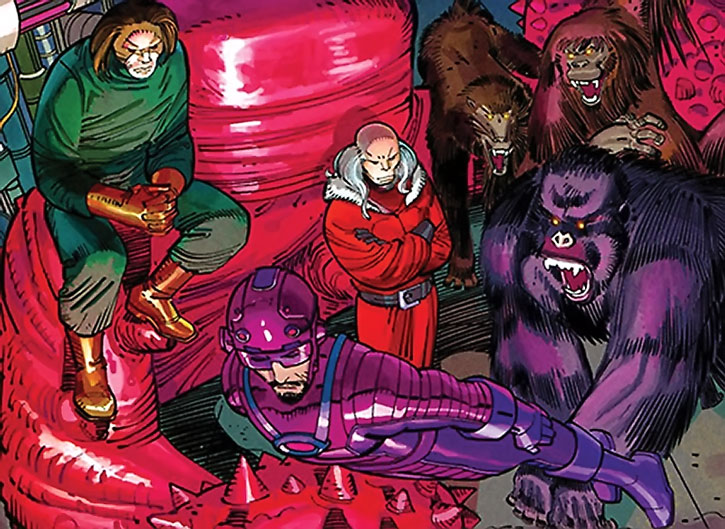 Freed by Deadpool, who he’d brought with him as a back up, Red Hulk drained the Cosmic Hulk of its power to restore his. He then drained the Leader of his gamma radiation, leaving him without his intellect. He then stepped into the middle of their plan, claiming control of America.

After a hulked-out Amadeus Cho changed MODOK back to George Tarleton, Banner began reabsorbing the energies from the Cathexis device. He was aided by a repentant Samson, who gave his life to keep it together. The process turned Banner into the Hulk again, which he’d been unable to do for a while.

The Hulk then faced off against the Red Hulk, ultimately beating him, and seeing him arrested.

The remaining members of the Intelligencia had taken advantage of the chaos to loot the Treasury’s Department of Engraving and Printing, fleeing as the greater plan fell apart.

The Intelligencia seemed to have again disbanded following the failure of their plan.

Furthermore, the She-Hulks Jennifer Walters and Lyra took it on themselves to hunt down the remaining members of the group, ultimately catching and imprisoning them in Gamma Base.

This device uses the calculating power of five Intel-level minds to throw a small group 1/3144ths of a second out of synch with their surroundings. This enabled them to move unseen, even by psychic detection (although some mystically sensitive types may sense them).

This effect (it’s unclear whether the device is portable, but it has been transmitted through the Cosmic Hulk) is basically a dumbing ray. It has reduced Doctor Doom’s intellect to the point where he can’t remember how to cast spells.

As the reduction in mental acuity is unlikely to be noticed immediately, the continuing effect of the ray may take a few minutes of attacking the target before it does the maximum damage.

[Mind Drain (affects all Mental stats as an automatic Multi-Attack, can’t reduce a target’s STATS lower than 2, drained APs are not added to anything): 15].

This machine originally drained gamma radiation from one individual to use on another. It has since been modified to also use cosmic radiation.

It requires a source of gamma radiation to power it, and has in the past used the Hulk (Banner), She-Hulk (Jennifer Walters), and Red Hulk as power sources. This doesn’t normally remove their powers. However, they can’t resist the effect if they’re secured in the machine.

Properly calibrated, the machine causes a permanent change to the target’s physiology. That means Bestow: 20, with the Permanent and No RAPs Restriction Bonuses, often also giving them Rage at some level (at the discretion of the device programmer), and Strange Appearance.

More recently the device has been used less precisely, to hulk-out an army of AIM marines, and a number of super-heroes. But it had a random effect since it was not properly calibrated to their specific physiologies. This would have killed them once the boost had run its course (a matter of hours).

This is a Bestow: 20, with an Area Effect, always giving them Serious Rage and Strange Appearance, and a Mind Drain: 10 which affects INT rather than Mind. It was programmed to increase the target’s STR and BODY, but won’t increase the STR or BODY higher than 15 AP.

If the target resists the Mind Drain, Bestow will alter their mental faculties instead, possibly giving them Mental Powers (GM’s discretion). 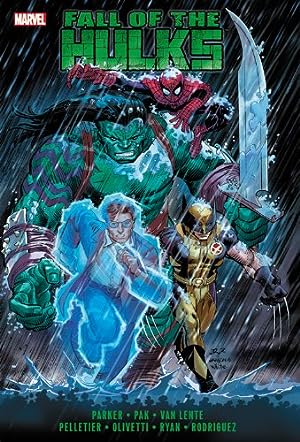 Incredible Hulks: Fall of the Hulks