Interceptor Force is a 1999 action movie also known as Interceptors and Last line of Defence. As you may suspect, it’s D-list at best but heh, we like those too. There apparently were sequels.

It stars Olivier Gruner, a French martial artist who was in many such movies.

Sean is a mercenary with a military background. He’s an expert at:

He really excels at the martial arts, particularly at the art of savate. As well as taking physical punishment well.

Despite being the leader of his own gang of mercenaries, the Interceptor Force, his leadership abilities are lacking.

Sean’s French heritage has also left him with some knowledge of the finer things in life.

Sean Lambert was born and raised in France. He served in the military. He then sought work in the more lucrative business of the mercenary.

Befriending two other mercenaries, Dave and Russell, they formed a small group, the Interceptor Force. A string of successful industrial and military espionage missions gave them a good rep. But it also meant they became known as potential spies by the better corporate security teams.

They thus started doing more military work. The US Air Force hired them for some small missions, then offered something much bigger.

American early warning satellites tracked a mysterious flying object. When four fighter planes were sent in, they were attacked by an unidentifiable spacecraft. All four were downed by laser weapons, but not before the fourth plane had fired off its’ missiles.

These severely damaged the alien spacecraft. It crash-landed in Mexico, near Baha. The pilot was an alien being capable of assimilating human life forms and changing between an energy and organic form. He survive the crash easily, and began assimilating locals.

The US Air Force, which had dealt with certain aliens before in Yellowstone, Canada, recognized the threat the mysterious assailant might be. They hired the Interceptor Force team to go down in order to investigate the crash site, while being accompanied by Dr. Jena Goodwin, communications, and Dr. Jose Perez, engineering and detection.

They were told that one of the Air Force’s fighters had crash-landed there and that it had contained sensitive data that couldn’t be allowed to get into Mexican hands. The Air Force had actually gotten permission by the Mexican government to clean up the mess in 24 hours, by lying about some sort of accident.

Once upon a time in Mexico

Not being told anything about an alien, the Force members saw it as a routine job and a quick way of earning $75 000 each. They reluctantly added Goodwin and Perez to the team and went in.

The city of Baha, itself, was a corrupt, small village. They soon, after their arrival, found traces of the alien.

Sean’s team was to exterminate any surviving alien. Goodwin was also equipped with an experimental energy weapon that was expected to finish off the alien in its energy form. The government gave the team less than 24 hours before they’d drop tactical nukes to sterilize the area.

Lambert’s team now had to battle the alien as the clock ticked and the American bombers approached.

The art of intercepting

The team had several fights with the alien, once even blowing it to pieces using the energy gun. But by the point the deadline was reached, only Sean was left alive.

When the Air Force nuked the area Sean jumped down into a deep well. He thus survived the effects of the blast. The alien was destroyed and Sean could get home to collect the money, which had been increased to $2,000,000.

Sean Lambert is a man with black hair and brown eyes. He’s also quite muscular and tall, and moves very dexterously and fast if need be.

Very often clad in a fine dark suit, he occasionally, in physically demanding situations, wears shoes, trousers and a white T-shirt only. Very often he also wears a pair of black sunglasses.

He often relies on his unarmed combat ability, but occasionally uses smaller automatic weapons, which he will wear in a holster under the jacket.

Lambert’s main personality trait is his coolness under fire. During extreme stress (or while being interrogated) he remains calm and controlled. In such situations, as during combat, he will not tend to his wounds or even slow down. He will patch himself up after the mission is over.

Sean walks around calmly, even in very alien and unusual situations. With friends he’s professional, and with outsiders almost a buffoon.

When he gives orders to someone he expects them to obey, regardless of whether or not they are part of his team. He will, however, back down if need be and follow his employer’s orders since he is a professional.

The threat of violence doesn’t bother him the least. This is probably because he knows he’ll come out on top in most combat situations.

Being something of a gentleman, he will usually not hit a woman that attacks him, but will attempt to reason with them instead first.

The mercenary life fits him very well. Thus, he will not work free or even too cheap. If a mission is much harder than expected he’ll try to demand higher payment for that mission.

Being a very direct man, he also prefers the direct approach to missions. For example, when hired to perform some industrial espionage, his plan was to enter the building, get caught and interrogated, then escape, beat them all up, interrogate them instead, find the data he’s looking for and lastly walk out from the building. At least he usually has a backup plan.

Industrialist: “You’ll never find it !”
Sean: “I already have.” (With a big smile)

Perez: “Just because I grew up in Mexico doesn’t mean I know how to hotwire a car !”
Sean: “I grew up in France. I wouldn’t be offended if you asked me about wine and cheese.”

Sean Lambert is relatively small fry and can easily be inserted as is. Being French he might fit extra well in French-speaking areas, but might, as in the movie, work for any bigger industrial or military organization.

Given his skill level, perhaps he once even trained the superheroines called Crimson Fox.

Drawbacks:
Mistrust (for Industries only).

Source of Character: Interceptors movie (aka Interceptor Force, Alien Interceptors and The Last Line of Defense), character played by Olivier Gruner, who’s completely obscure, but somehow keeps ending up in all the bad action movies we love. 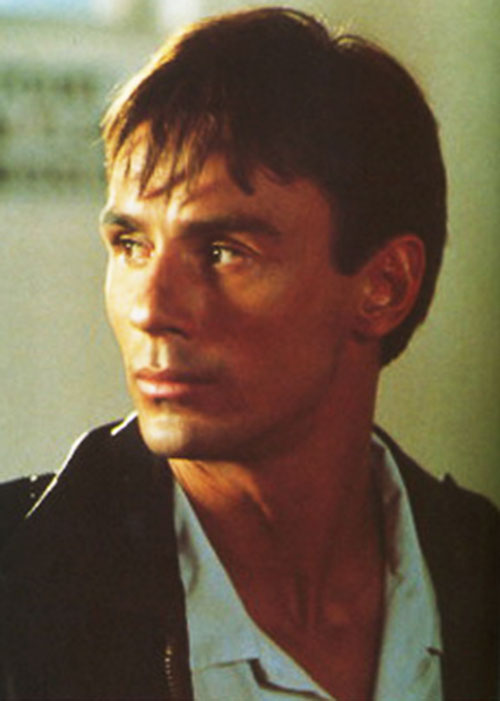