International Operations (I.O.) was the big not-the-CIA agency in early Image Comics. It is a key part of what splintered off to become the Wildstorm Universe, featuring in many stories and character backstories.

Purpose :
IO was created to give the US a special security division to deal with the alien threats emerging after WW2. Later it doubled as an efficient arm against super powered threats.

Modus operandi :
They collect data on the maximum number of SPBs (super Powered Beings) of Earth, either as potential threats or potential allies. They analyse the threat levels then dispatch the menace by sending specially trained troops. They sponsor research on the best defense against super powered menaces.
They also cover immoral and illegal activities, like human genetic experiments, military operations in foreign countries, abductions, assassination, etc.

Extent of operations :
As an intelligence agency, it spreads all over the world, though, as for any intelligence organization, the State will never admit it. As a crisis response team, they operate wherever US interests are placed in jeopardy by extraordinary foes.

Relationship to conventional authorities :
IO responds only the President of the United States, its VP or specially appointed government officials. We can assume it maintains some contact with other national security agencies like CIA, NSA or FBI, though it surely is a one way communication (meaning they use the others’ resources without allowing them to do the same).

Bases of operations :
There are agencies all over the world but the most notable sites are : McLean, Virginia (Headquarters), Midtown Manhattan, NYC (Archives building), Nevada Desert (Sector 52 alien research center)…

Known enemies :
This greatly depend on the helmsman. Its original enemies are the various alien races that settle on Earth (Daemonite, Kherubim, D’rhan). But due to their immoral practices, they crossed steel with SPB like Gen 13, DV8, WildCATs, Team 7, Wetworks. Nearly any heroes’ team had trouble with them (note that many of these SPBs originate from IO experiments).

Known allies :
Again, depending on the period, and the stage of knowledge these people had of IO activities, they lined up with the same SPBs teams.

Number of active members :
Many, in the thousands. After all it’s an official US administration with field agents, special troops, R&D, administrative personnel…

Number of reserve members :
None of significant importance. When a valuable asset left IO, it was because of a disagreement with the organization policy, which usually resulted in violent departure. So either IO disposed of it, or deployed huge resources to track it and terminate it.

Organizational structure :
It’s a rather pyramidal structure. It’s divided in several departments : R&D, Administration, Black Razors, Operations… whose head attend the board of director and respond to IO director. Over the time, there has been various covert divisions not represented on the board but still reporting to the director.
However, it’s a military organization, using army’s ranks, and military confidentiality’s policy. That is, not any member can access any information. Many things are kept secret to the very concerned people (like “If I tell you, I’ll have to kill you” or “don’t ask the question when you don’t want to hear the answer”). Here are samples of IO’s departments :

Membership requirements :
Field agents are drafted from the US security agencies (CIA, NSA, FBI …) and SOCOM (Navy Seals…). We can assume the administrative personnel fits this criteria, too ; they may even be field operatives sent back to paperwork for punishment (meaning they can handle a minor threat themselves).
Super Powered agents are recruited on the fly by seduction, corruption or blackmail (making them liabilities) or even created by experiment (like Team 7, Gen 13 or DV8) which makes them even more dangerous once they know the truth.

Previous purpose and goals :
Its activities were always, more or less, oriented toward its original purpose. Though the methods employed depended much on the current director. They all made covert, even illegal, projects to enforce their mission. Some (Craven, Baiul) were so thrilled by the power given to them they made their own agenda to satisfy their personal paranoia.

Major campaigns or accomplishments :
Under Lynch’s directorship, and with the help of the WildCATs, IO exposed the Daemonites’ plot as the VP was possessed by one of their kind. With the help of Backlash and Grifter, they dispatched the Kindreds threat (one they made themselves after failed experiments on animals a la Dr Moreau).
The Puritans sent a long term prepared operation across the barriers of Time in an attempt to prevent the Daemonite-Kherubim escapees to spread all over the Earth.

Major setbacks :
Project: Genesis went completely out of control. It was initiated under Craven’s directorship, to create a bloodline of super powered agents by exposing them to an entity called the Gen Factor. The initial targets of the experiment (Team 7) went AWOL, then, when IO put its hands on their offspring (Gen 13, DV8) they also ran away.
This was under Lynch directorship, directed covertly by Ivana Baiul and led to Lynch’s defection when he helped Gen 13 escape.

IO Agents :
These are the standard field agents sent on intelligence missions and taking care of daily business. They are former intelligence or security operatives selected because they showed particularly high levels of aptitude.

Black Razors:
These are elite crisis response teams sent to take care of super powered menaces. They are equipped with standard issues Black Razor Armor (see equipment section below). These troops are taken from the IO pool of agents and are specially trained to deal with SPBs.
There are several distinct corps of elite troops in IO, whether they’re called Black Razors, Keepers or Puritan Stormtroopers is purely branding. They share the same gear and technical aptitudes. 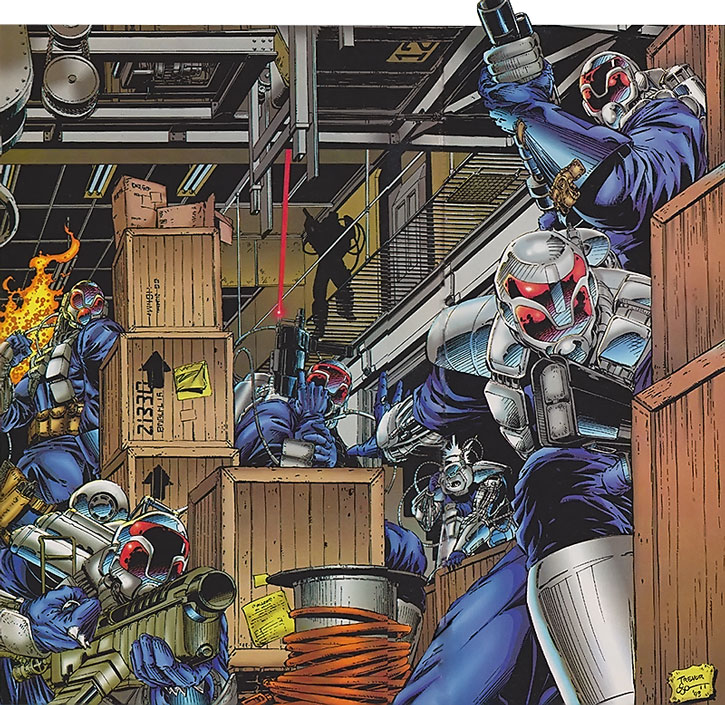 A squad of Black Razor operators.

Resources:
25 (after all, they can plunder in the US tax income).

Origin issue :
I don’t know, but I suspect it lies somewhere in the Team 1 issues.

Significant issues :
Here goes the history of IO. As the format of this entry doesn’t really shows continuity, it suits me well as I could easily get confused in the IO’s timeline.

WildCATs #1-4, when Lynch lines up with Emp and his team to expose the Daemonite possessing the US VP and counters Helpont’s plan to open a portal to bring in Daemonite reinforcements with the Orb of Power.

WildCATs #15, when Ben Santini, newly appointed Black Razors leader, has to protect Emp from abduction and assassination by Daemonites.

WildCATs #37+, enters the Puritans, putting in motion their long planned operation to go back in time to deal with the Daemonite-Kherubim invasion, way back to their landing on Earth. They try to recruit Dr Stone (Maul) as an alien biology specialist. They launch a series of abductions of known aliens on Earth. It starts with the Kherubim Mythos in Hong Kong, then Olympia Atreidae, a Former Coda full Daemonite.
With the help of Andrew Stansfield (a man working as assistant to Emp over the years), they penetrate the Halo building and abduct Lord Emp. All to bring then to Sector 52 research lab for studies or whatever. And then, the race across time begins between the Puritan expeditionary force and the trailing WildCATs.

Gen 13 LS #1-5, when all the story around the Gen Factor starts to be revealed. Where Lynch defects from IO to help the teens escape Baiul’s clutches (namely).

Gen 13 #5, when Ivana Baiul activates DV8, the other Gen 12 offsprings, to launch them after Lynch and the Gen 13 fugitives.

Gen 13 #18, when they finally found the teens’ hiding place in La Jolla and tries to abduct them. But Lynch has more than one ace in his sleeve and manage to escape once more aboard an Halo aircraft, leaving Anna, the android housemaid, dispose of the Black Razors team by blowing of the mansion.

Gen 13 #34, when IO, tracking Rainmaker and Freefall while on a trip to NYC to visit Roxy’s mother, nearly manage to capture the two girls.Alex Fairchild, former Team 7, saves the day.

Gen 13 #35-40, when IO, with the help of a mad scientist, tries to capture any people showing traces of the Gen Factor. The mad scientist needs it to sustain himself as he merged with Sigma’s genes (The Gen Factor). He got help from an extra dimensional race of aliens, then trapped Sigma in the alternate dimension, stole the alien technology and sealed the portal behind him.
With this technology, he offered far better Black Razors to Ivana, until she discovers that he had completely stripped them of their humanity. It ends with the death of Alex Fairchild (Fairchild’s and Freefall’s father) as he was all out using his mental powers to destroy the scientist. After all, it went personal as the guy had developed a sexual attraction to the 7’ redhead.

DV8, everything related to DV8 is related to IO. Actually, this team was either part of IO or running from IO’s agents and troopers. We discover that Baiul is completely insane and sex addicted. She constantly injects drugs in her little Gen active guinea pigs to show how much she can boosts them. She has a sidekick even more psychopathic than her and he cares for her. She alternately send them on vital, often suicidal missions, then tracks them down all around the globe after they went rogue. Powerhaus dies. She sent them to raid a CIA facility to steal an alien body.
And that episode leads to the plot where DV8’s series ends : Santini, Colby and other board members are planning to blackmail her out of her position of IO’s director, using the video footages of the CIA compound. They also recruit the defecting members of DV8 (Frostbite and Sublime).

Wetworks, the debut of Wetworks are related to a mission where Craven, IO’s director of the moment, send them on a suicide mission against the Wampire nation. That’s where they got their symbiotes.

Team 7, everything related to them is related to IO as they were field operatives. It’s Craven that exposed them to the Gen Factor and to a nuclear blast to raise super powers in his agents. Unfortunately, they didn’t appreciated the gift as it made their life a hell (those who didn’t killed themselves experienced very painful psychic traumas).
Team 7, or Gen 12, was the start of the Project: Genesis experiment that led to Gen 13 and DV8 (and many more).

StormWatch, StormWatch opposed IO several times as part of the USA’s mistrust of the UN’s organization.

StomWatch vol #2: #1-3, when the UN counters an IO plan to create yet another series of superhuman soldiers. IO abducted gifted people all around the world, with the help of former StormWatch’s mad Weatherman Henry Bendix (he has a very extensive list of superpowered individuals). They dissected them and implanted the superior organs in US soldiers.
They playtested their supersoldiers by using biowarfare weapons on a small Louisiana’s town (Pavane) and sending their people there to see if they resist the biochemicals.

Equipment:
BLACK RAZOR ARMOR, Plasma Gun (see below) There could be minor variations of the skills as a squad could have specialists (Combat medic, Field officer, Black hammer pilot or gunner). Consider that this specialist has a skill of 05 in their speciality.