The original Ultramarine Corps (Warmaker One, Flow, 4-D, and Pulse 8 – who renamed himself The Master) were marines inducted into a secret project run by General Wade Eiling. They gained superpowers via synthetic metagenes, giving the military superhuman resources under their direct control.

The team’s cover story was that they’d gained their powers through travel to a higher dimension when a mass teleport system imploded, saturating them with proteum radiation.

Their first mission was to recover the Shaggy Man from the bottom of the Atlantic. The creature had been imprisoned in a stasis tube by the JLA. Warmaker One clashed with members of the JLA, but escaped with the Shaggy Man.

The military then led the JLA into an ambush with bogus reports of an alien invasion in Phoenix, AZ. The Ultramarines led the military attack. When it caused significant devastation to the city, and damage to American citizens, some of the Ultramarines questioned their orders.

When Superman examined their DNA and informed them their powers would kill them within weeks, they agreed to join the JLA to confront Eiling. They discovered the terminally ill Eiling had committed suicide, transferring his mind into the body of the (newly-shaved) Shaggy Man. The teams worked together to battle him, eventually teleporting him to a distant asteroid, far from Earth.

With the JLA’s help they were cured of the terminal side-effects of their powers.

Deciding they were no longer comfortable operating under anyone else’s control, the group renamed themselves the International Ultramarine Corps.

Declaring themselves independent of any nation, they dedicated themselves to intervening in global crises without holding back as they saw the JLA doing. Pulse 8 renamed himself The Master, and Flow became Glob. 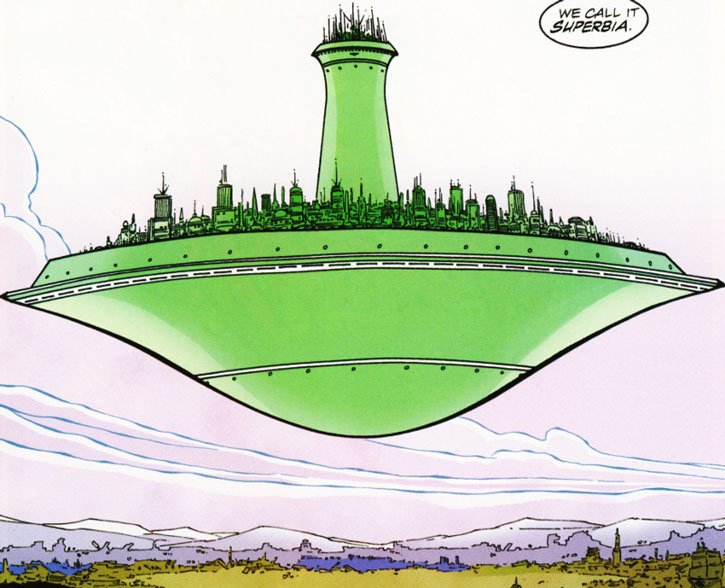 They created the flying city of Superbia above the ruins of Montevideo , and recruited a number of other heroes (around 30 in total). These included Vixen, Knight and Squire, Goraiko, Jack O’ Lantern, Tasmanian Devil, Olympian, Kid Impala, Little Mermaid, and Fleur de Lis.

Superbia flew to trouble spots around the world. They took in refugees who wished to start new lives away from government control, and who were willing to live by the group’s goals of peace and stability.

While the JLA were absent, distracted by another mission, the Ultramarines responded to an incident in Kinshasa . It had been attacked by the forces of Super-Gorilla Grodd, but was actually an ambush to capture the Ultramarines.

Grodd and his allies Neh-Buh-Loh and the Sheeda struck before the team could rally a proper defense.

While a few managed to evade capture for a while, only Squire managed to get away. The others were captured and mind controlled by the Sheeda, turned into a superhuman force Neh-Buh-Loh intended to use to hunt down the future Seven Soldiers. The refugees on Superbia didn’t survive Grodd’s gorillas.

Having contacted Batman for help, Squire reached him before Grodd’s forces caught her. Batman took them to the JLA remote lab on Pluto. The JLA had gone into the baby universe of Qwewq after the super-villain Black Death, who’d been sent there by Neh-Buh-Loh to distract them.

Batman left Squire to contact the JLA while he returned to fight a delaying tactic with robotic duplicates of the JLA. 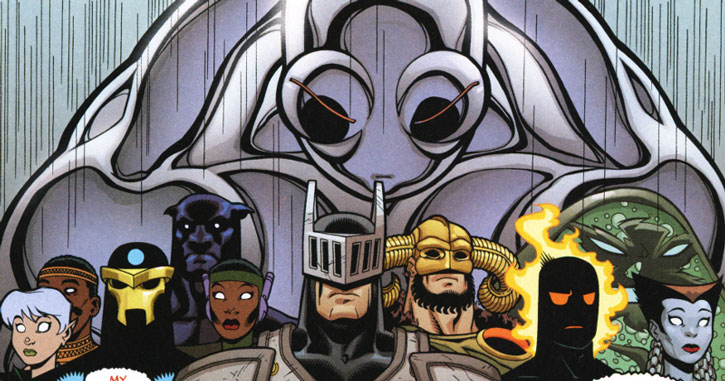 Squire managed to get through to the JLA as they were apprehending Black Death, and told them of the situation. They returned in time to stop Grodd eating Batman, and beat Grodd and Neh-Buh-Loh.

Following their failure, the Corps were berated by the JLA for the short-sightedness of their lethal force policy in a universe of time travel and other wonders. There death could be the easy way out for their opponents, and not something likely to last long.

The JLA sent them into the pocket universe to act as its defenders. They ultimately failed, and Qwewq eventually evolved into Neh-Buh-Loh.

The Corps returned to Earth, but most members appear to have left after that. It’s unclear how many beyond the founding members remain, but they continue to operate, Superbia becoming one of the surviving watchtowers against Darkseid’s rule during the Final Crisis .

Superbia is the floating city created by the Master. Initially it hovered above Montevideo, Uruguay, which had been destroyed by Vandal Savage. But it was capable of travelling to trouble spots all over the world.

It served as home to the extended International Ultramarine Corps, along with an indeterminate number of refugees and other ordinary humans who chose to make it home. Its complete capabilities have not been revealed, but it has a sophisticated sensor array. 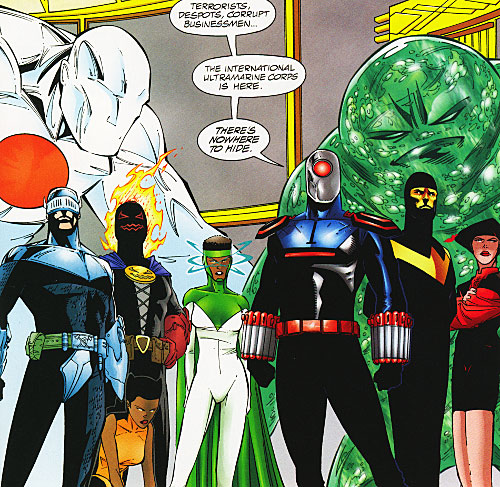 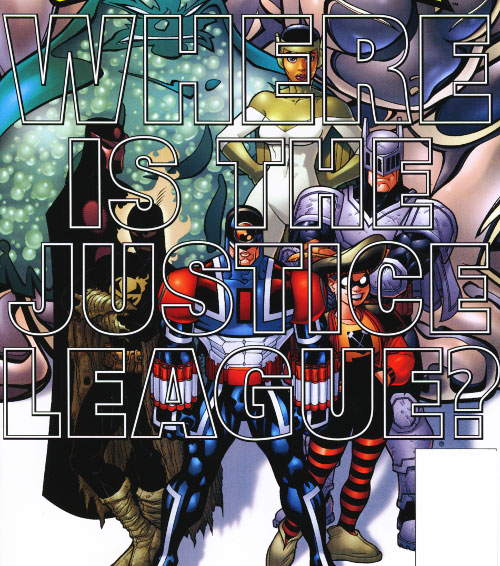