He’s strong enough to punch down trees and to uproot trees to use as weapons. He’s fast enough to run away from Eagle-Eye G.I. Joe. He is the strongest creature that GI Joe has ever seen.

In his only (?) appearance in comics, the Intruder appears in a GI Joe ad found in such July 1976 Marvel comics as Invaders #7.

In this story, Eagle-Eye GI Joe and “The Commander” are on routine patrol in a helicopter. But Joe notices a shooting star. ”The way your eyes move…boy, they never miss a trick !” the Commander tells him.

They land as Joe spots the Intruder in the jungle. Strongman from another world, the Intruder is on a rampage, smashing trees for no particular reason. Therefore, he must be stopped.

The Intruder thinks that if he beats Joe, nothing can stop him ! Joe punches the Intruder, causing him to drop his tree-club. The Intruder then grabs Joe who quips, “You’ll really flip over this !” as Joe breaks free and flips the Intruder.

Just as Joe is about to capture the Intruder, the Intruder runs away ! “You can imagine they’ll meet again,” the caption tells us. ”Eagle-Eye GI Joe with moving eyes, and the Intruder, enemy of GI Joe are available at your local toy store !”

A big dumb brute with a bowl-cut and a short beard, the Intruder wears little in the way of clothing. His outfit consists of golden armor in the form of a sleeveless (and side-less) shirt and a pair of briefs.

He has a peculiar chest symbol (a red circle inside which is a blue bottle? with white wings). His belt buckle is a gold circle containing a red V. He has no gloves or shoes.

According to http://ourworld.compuserve.com/homepages/bink/atfigure.htm (defunct), the comic ad Intruder is merely a Commander of the Intruders, who are presumably a race of alien enemies of GI Joe. Standard warrior Intruders have silver armor (not gold) and are beardless.

Dumb. He thinks beating up a jungle is the path to global domination. His arch-enemy’s only power is Telescopic Vision. And he always loses.

If using the GI Joe history, he could become an operative of the Cobra Commander, seeking revenge against all incarnations of GI Joe. Otherwise, he’s just another big dumb thug who could join up with any villain group.

Alternatively, one could stage an invasion of alien Intruders. Despite having no particular intelligence, these would require teamwork and skill to defeat…since the writers would write the heroes as morons as well.

“If I can defeat this mortal, nothing can stand in my way !”

Drawbacks:
He might be mute, since he doesn’t speak, though we do see two of his thought balloons. He doesn’t even let out an “Oof !” when Joe hits him. 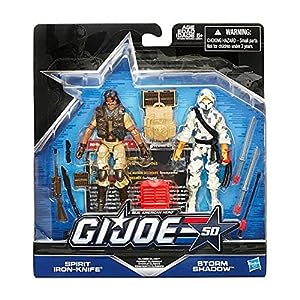 More GI Joe toys than even the Intruder can lift 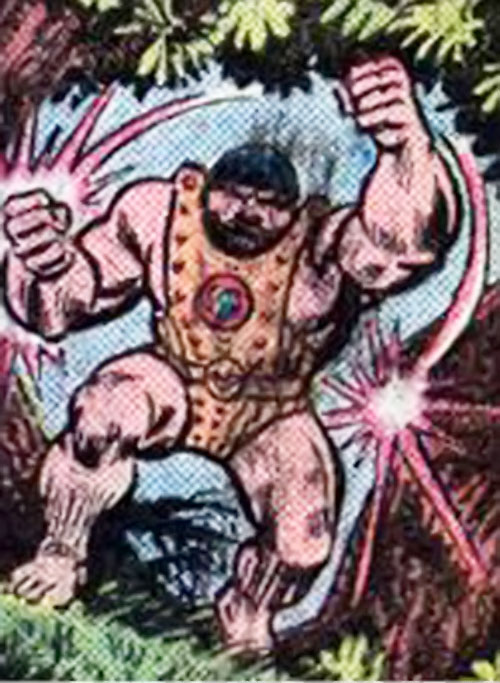 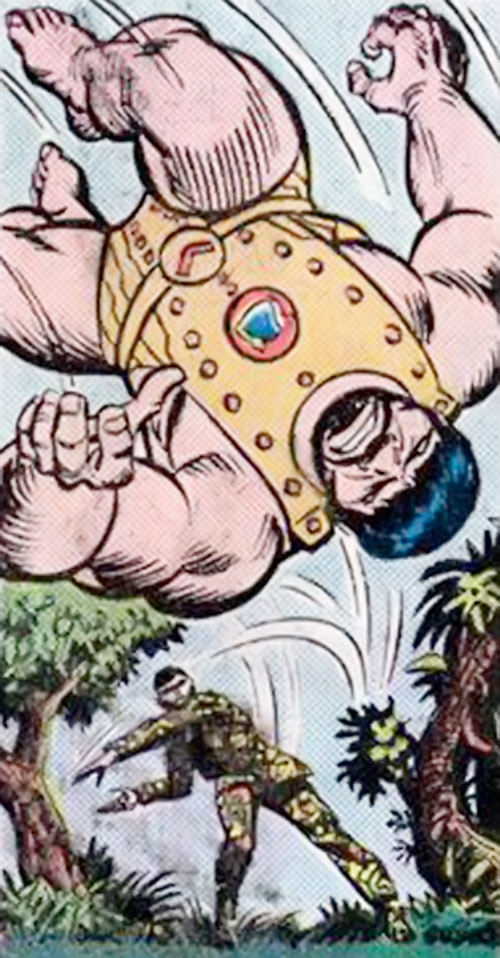