The Invisible Un-Thing lives up to his name… underwater, at least. When submerged, the Un-Thing immediately fades from view.

He also possesses some rudimentary fighting skills and is less affected by water resistance than a normal human. This explains the ease with which he defeated Aquaman in his initial confrontation with the sea king. It certainly makes the Un-Thing a dangerous opponent beneath the waves.

In his first and only recorded encounter with Aquaman, the Invisible Un-Thing, along with Terrible Trio teammates the Fire-Haired Karla and the Fisherman, allied himself with a race of aliens. The Trio referred to these only as “Them.”

The aliens sought to invade Earth. But they possessed a fatal vulnerability to water. Therefore, they enlisted the aid of the three criminals in disposing of the world’s oceans. The aliens gave the Trio a strange satellite that created holes in the ocean. Naturally, this attracted the attention of Aquaman, Aqualad, and Mera.

The villains did well against the heroes, initially. In fact, the Invisible Un-Thing succeeded not only in capturing Mera but in kayoing Aquaman himself. The Trio zoomed away in an undersea saucer supplied by the aliens and when Aquaman revived, he and Aqualad pursued them.

In their second confrontation, Aquaman doused the Un-Thing in octopus ink, dragged him into one of the holes created by the aliens’ ocean-stealing satellite, and quickly defeated him. With Mera rescued (by Aquababy! Best exchange in the story; Mera: Isn’t he just the most wonderful, darlingest, dearest baby in the whole world? Aquaman: Naturally -ahem- since he’s my son!)

With the Trio vanquished, the aliens revealed themselves and attempted to kill the Aqua Family and the Terrible Trio.

Using the undersea saucer to control the ocean-stealing satellite, Aquaman and Karla chased the alien spacecraft out of the sea. Once above the water, they rammed the satellite into the spacecraft and the alien invasion ended in a terrific explosion.

Aquaman turned the Terrible Trio over to surface world authorities. The Invisible Un-Thing has not been seen since.

The Invisible Un-Thing wears an ill-fitting diving suit with a weighted belt and a fairly nondescript scuba tank, mask, and swim fins. The entire costume and every accessory are white.

He is a slightly overweight man with a fringe of black hair around his bald head.

The Invisible Un-Thing is a merciless bully to men and a lecherous swine to women. Provided, of course, he is underwater and invisible. When Aquaman succeeds in removing him from the water and therefore rendering him visible, he cries out in fear and scrambles for the safety of the waves.

Mera: “What ? Invisible arms holding mine ! I can’t gesture !”
The Invisible Un-Thing: “Correct gorgeous – and if we only had the time I’d show you some invisible love ! Ha ! Ha ! Ha !”

Though the Invisible Un-Thing has not resurfaced in the post-Crisis DC Universe, it is not impossible for his encounter with Aquaman to have occurred much as it was originally presented. It is possible that his long absence was due to his “paying his debt to society” and he is only now being released from prison.

No doubt, the Un-Thing would immediately make for the sea. The advantage that being submerged gives him and the penalties that most characters would suffer in the same environment ensure such an encounter would prove quite challenging to most PC teams.

The usual drill, Heights and Weights are best guesses. In addition, I gave the Un-Thing an abbreviated form of Water Freedom. The beating he puts on Aquaman during their first skirmish simply cannot be explained by the Invisibility Power alone. 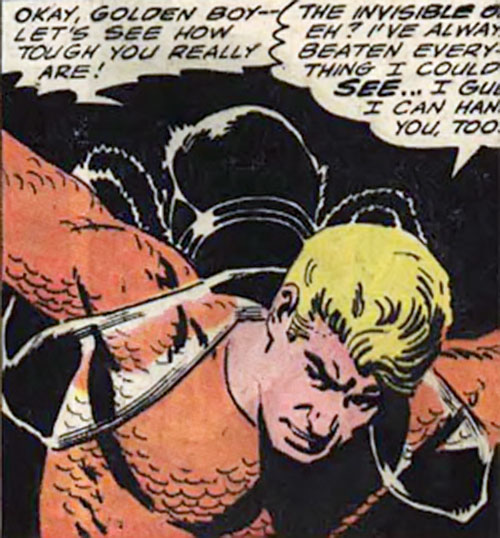 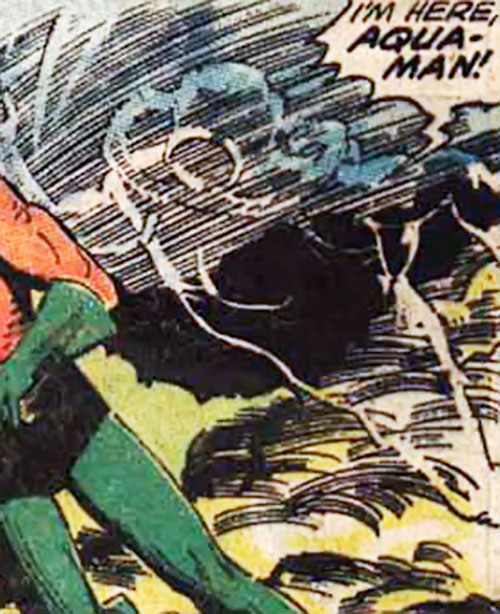 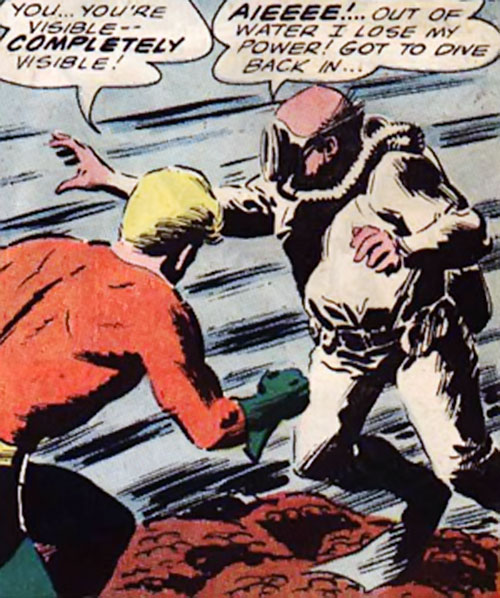