Sue Richards’ psionic  ability to manipulate ambient cosmic energy enables her to bend light around her body without distortion, thus rendering herself invisible. The cells of her body produce an unknown form of energy she can mentally project around other people and objects — rending them invisible, as well.

Richards’ brain cells produce psionic force she can shape into relatively simple forms – such as rectangle planes, globes, cylinders, cones and domes. Also, she can mentally project protective fields that are highly resistant to concussive forces. And by projecting columns of psionic force beneath her, she can travel through the air.

Sue has also taken up intensive martial arts training and has reached an impressive level. This is due in part to her natural intelligence, fighting experience and athletic ability and in part to the fact that her teachers include martial arts specialists such as Daniel “Iron Fist” Rand.

Susan Storm is the eldest of the two children of Dr. Franklin and Mary Storm. She was born in Glenville, New York and was raised like most children, with the exception of one thing: her father was jailed for performing illegal medical procedures.

When she was 12, she met Reed Richards (then 23) at her aunt’s boarding house. She was quite infatuated and tried to keep tabs on Reed for years to come. As Susan grew older, she became interested in acting and got a few small television roles.

Upon learning that Reed was moving to California, she left to pursue both of her dreams : Reed Richards and a career in Hollywood. She quickly captured Reed’s heart and to pledge her faith in him, she offered her and her younger brother, Johnny, as human Guinea pigs for his experimental rocket ship.

Sue was the first to find her super powers after the rocket crashed just outside of Central City, California. Initially, Sue could only become invisible at will. But over the months she gained the strength to render other objects invisible as well as create invisible force fields.

Reed and his father, Nathaniel, have theorized the her powers stem from hyperspace, giving her virtually a limitless supply of energy. 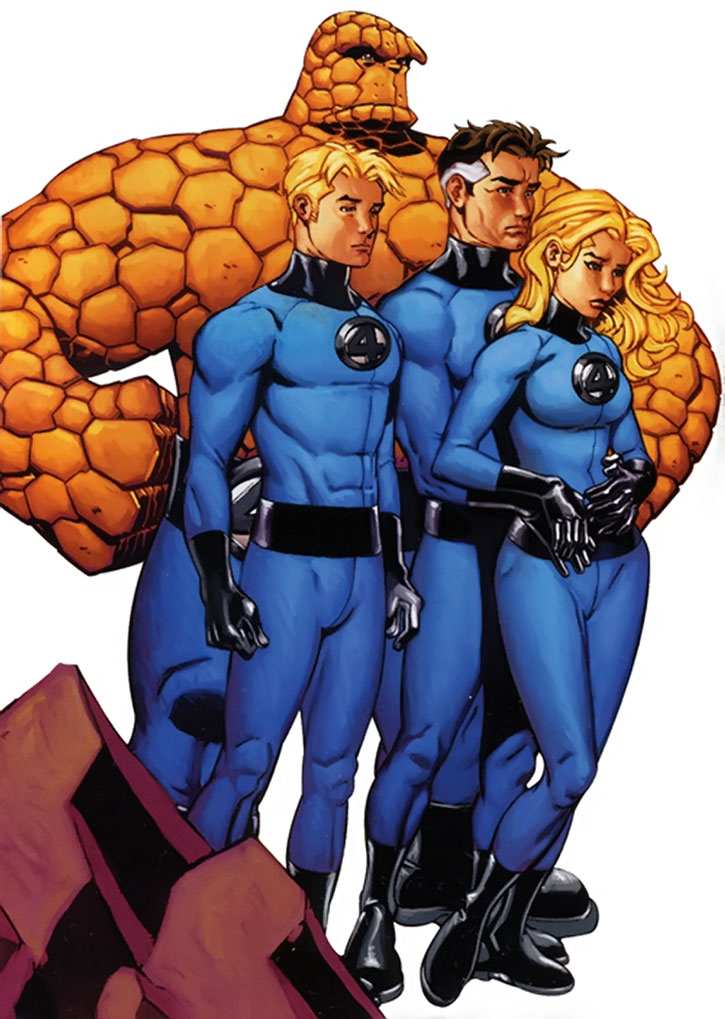 Shortly after the creation of the Fantastic Four, Susan designed their first uniforms. And not long afterwards she married Reed Richards and bore him a son, Franklin. Her first pregnancy was filled with complications, and she would have died if the remaining members of the FF “borrow” Annihilus’ Cosmic Control Rod to save her life.

Although her second pregnancy was not as life-threatening, their second child was still-born. It seems unlikely that she can bear any more children, and her doctor has recommended against it.

After Reed’s apparent death, Sue took up leadership of the Fantastic Four. She quickly became more than a power to be reckoned with. After Reed’s return however, she had been somewhat reluctant to give up her status of authority.

Since her son was captured by Onslaught, and his powers severely depleted by creating and maintaining the Franklinverse, Susan seems to be returning to a more motherly role. She hopes to raise her child in a more stable environment.

Sue is obviously more muscular (her strong martial arts training since the last writeup shows), and her attractiveness is more en vogue with the current tastes. She probably feels it less necessary to look like a respectable mother than she did before, and can allow herself to cut a little bit more loose.

Again using the list of adjectives from the SAGA Roster  (I like that book) : calm, loving, practical, capable fighter and leader, motherly, protective of her family (especially her son), surprisingly ruthless when friends or family are injured.

Sue is wiser, more practical and more responsible than all the rest of the team put together. This makes her an excellent leader – this is especially obvious when Reed is away. More than ever, the FF listen to Sue’s advice and orders. 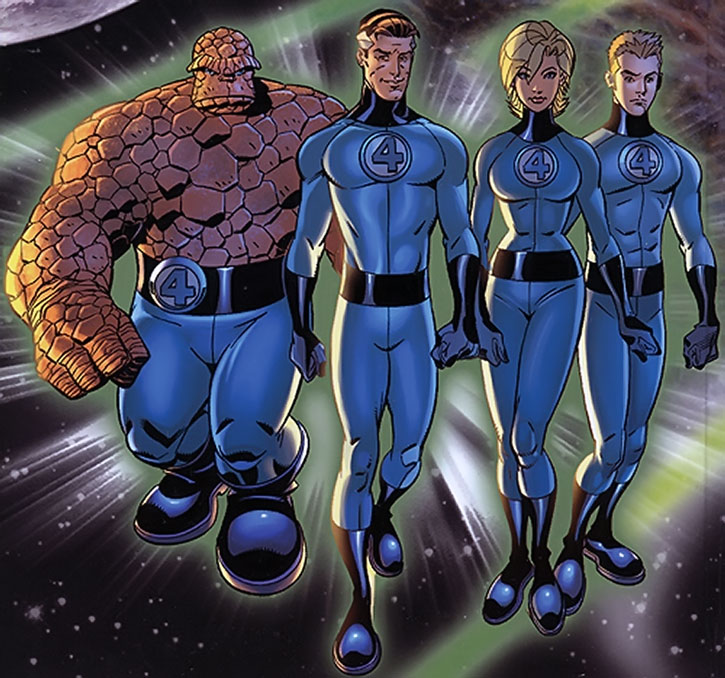 Advantages:
Expansive Headquarters, Iron nerves, Leadership, , Misc.: Den Mother (when Sue Richards is acting to defend children, her HP spending occurs as if she was operating in the next more favourable Genre).

Sue’s even more flexible than before, but this is more subtle than her previous gains. Mostly, she is better at visualizing multiple moving structures and more complex shapes – the GM should be more lenient as to the definition of “simple” in the “simple shapes” Limitation.

The main “new”, established stunt is projecting a blast of small force pellets, like a shotgun blast – it illustrates Sue’s better visualization well, although it’s not too subtle (AV 06, Shotgun Blast: 11). She also tends to use force melee weapons more than she ever did – say, a force staff.

Her raw power has also increased : her fields can now stand up to even stronger opponents.

I will reproduce the classic stunts from the 80s writeup :

* Without Defensive Roll
** She can reach an impressive Toughness 20 by centering her force field on herself.

If using the unscapped scale, increase the Protection ranks of her barrier to 16, allowing her to reach Toughness 22 against attacks targeted at her. 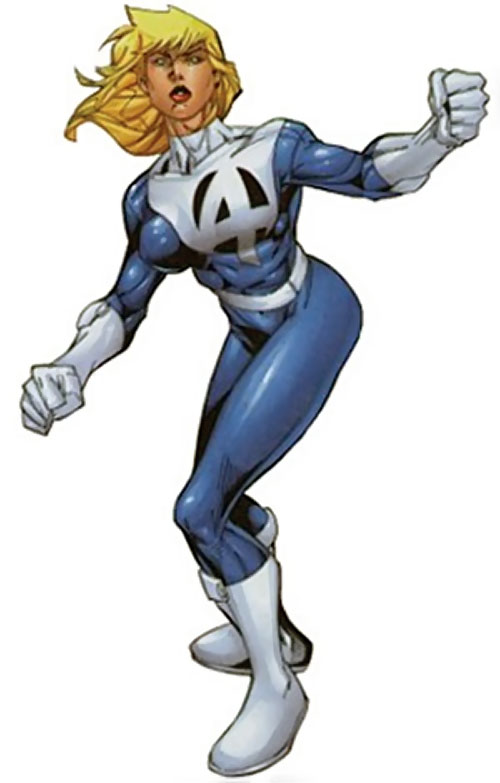 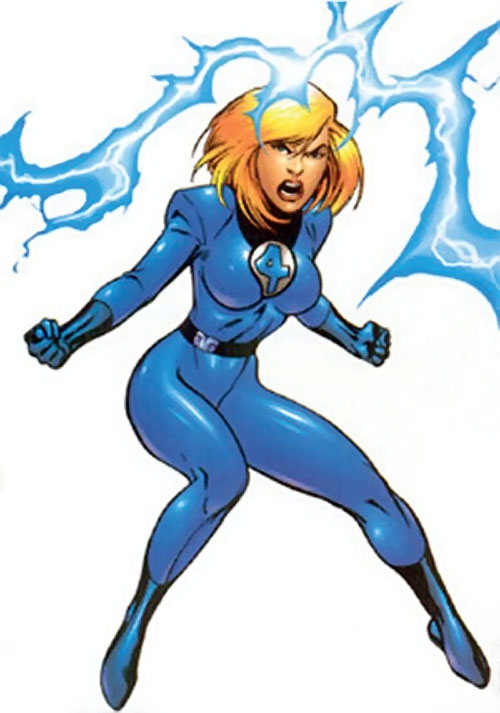 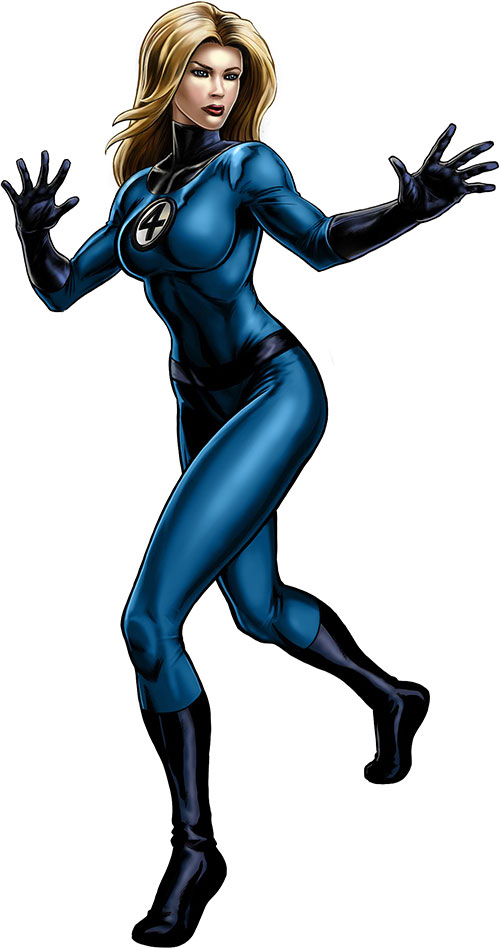