Sue can make herself and others invisible to all wavelengths of light. She has also used this power to turn others optic nerves invisible, leaving them blinded.

She can also project an invisible force which can be created as a protective field, or in other shapes. Extreme pressure on her force fields can be physically taxing for her.

Sue is also a scientific genius. While she specializes in biological fields, she is more than competent in other fields, having built an anti-gravity playpen for herself and her brother at around aged five.

The eldest child of renowned scientists Franklin and Mary Storm, Sue inherited her parents’ genius. Since early childhood she was one of the prodigies studying and working at the Baxter Building, a midtown Manhattan government research lab for gifted children run by her father.

When Sue was still young her mother left them to work on a top-secret project. Her father told Sue and Johnny their mother had died in a car crash, even staging a funeral.

Following her father into physics, at age eight she built a sugar-powered rocket and accidentally destroyed her father’s car. After this she changed her focus to ‘inner space’ biology. She became a formidable scientist, earning four doctorates in bio-chemical sciences.

She developed a romantic relationship with fellow student Reed Richards, and was present at his N-Zone transporter test when it went wrong. While apparently physically unaffected, she gained powers and called herself the Invisible Woman.

Sue made the study of herself and the other members of the Fantastic Four her new life’s work. She spent months investigating their abilities and charting their powers while improving her own understanding of herself.

She deduced the nature of both Reed and Johnny’s changes — though her own powers remain unexplained — but was unable to penetrate Ben’s skin with any more detail than determining his internal fluid pressure. 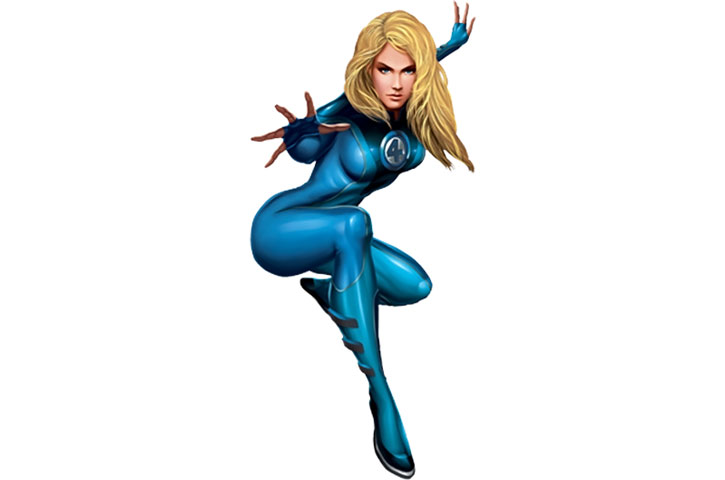 Her relationship with Reed fluctuated, as she often became frustrated when he obsessed over projects. This came to a head following the Ultimatum event, when he’d decided to deal with the larger threat rather than stay by her side. She understood the logic of his decision – that the larger problem also threatened her – but was unable to accept his actions.

She broke up with him, throwing herself into her work.

Sue was briefly enraged at her father on learning he’d lied about her mother, but most of her anger was reserved for her mother. She forgave her father soon enough, but her relationship with her mother remained distant at best, and Sue has shown little inclination to change that.

A while later Ben Grimm (the Thing) visited to catch up with her, and admitted he’d fallen in love with her. Caught off guard, she stood speechless, and the uncomfortable Ben left before she could respond. The building was attacked before she could catch up to him. Both became involved in dealing with the source of the threat: Reed.

During her first encounter with him the stresses of their bad break up came to the fore and the fight became vicious, leaving Sue badly injured. She recovered in time to join the effort to stop Reed’s plans.

Following the incident she found time alone with Ben. She realised a lot of what had attracted her to Reed had come from his friendship with Ben, and that she had feelings for him. Tired of the speed at which things changed for them, and having known him long enough to be sure of herself, Sue asked him to marry her and Ben agreed.

Whether they actually got married is unrevealed, but Sue continued her work as well as occasionally aiding the Ultimates in the field and out of it. She acted as Tony Stark’s doctor when his brain tumour again became a problem.

Calm and self-assured, Sue was the most stable member of the Fantastic Four. She is able to keep Johnny and Ben in line, and keep Reed focused on immediate concerns. She’s protective of Johnny, having been partly responsible for raising him after her mother’s departure.

While she loved Reed, she could get irritated when he was wrapped up in his science. While she’s one of the few who can understand the logic which usually guides his decisions, Sue herself is more in touch with her feelings than Reed, so tends to act more readily on instinct.

“You are important to me, butt-hat. Furthermore : I am a biotechnologist. That means you don’t get to make out with me without sliding that skinny body of yours into my warm little bioscanner.”

Iron Man: “I’m Tony Stark. And you would just have to be Susan Storm, yes ?”
Sue: “Um, yeah. Nice to meet you.”
Iron Man: “I have to say, the S.H.I.E.L.D. dossier on you didn’t effectively communicate your charisma. You know you could have travelled here in my arms.”
Sue: “But then I wouldn’t have gotten to ride in my boyfriend’s car. That’s my boyfriend. Isn’t he great ?”
Iron Man: “You know, some girls think my armor is pretty cool.”
Sue: “You should definitely try and meet someone like that, then.”
Iron Man: “I’m going now.”

“You people suck so hard you implode.” 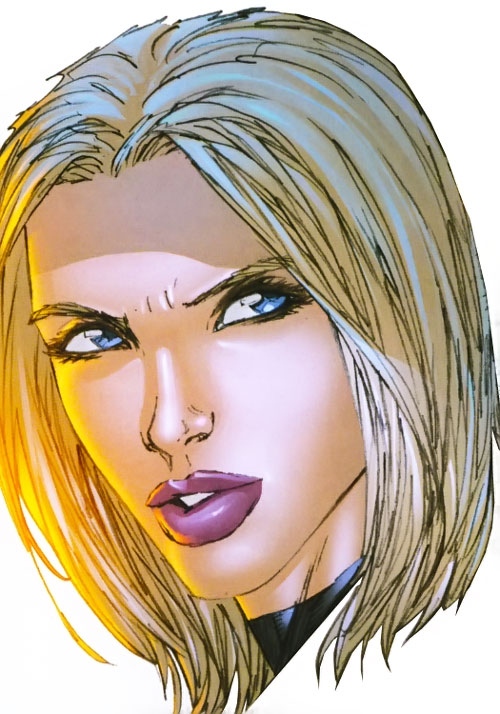 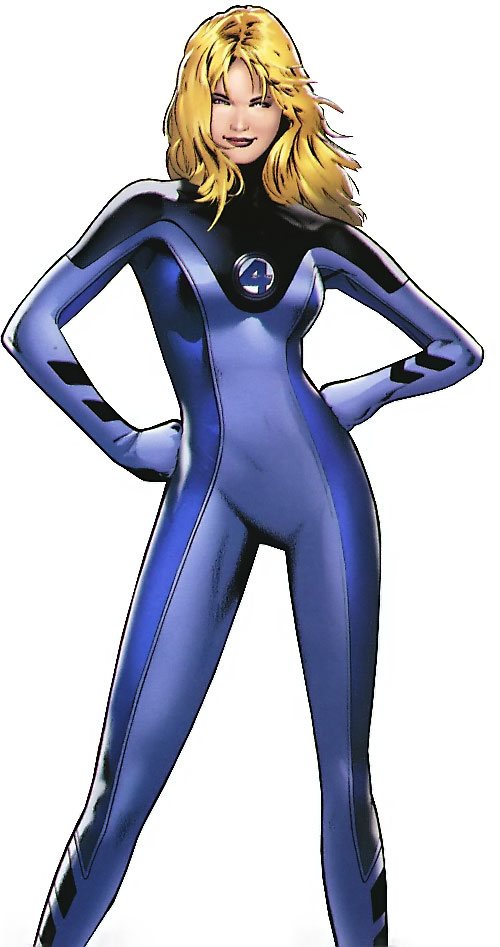 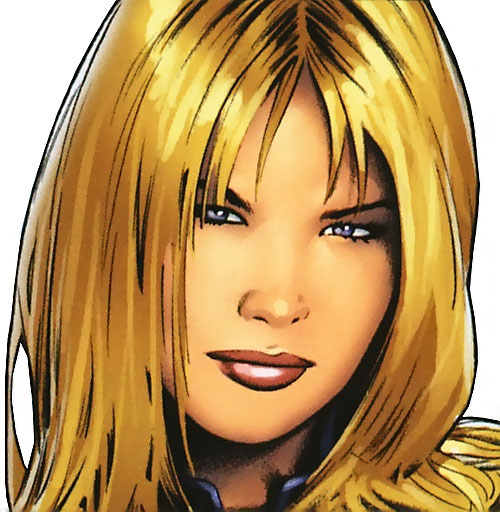 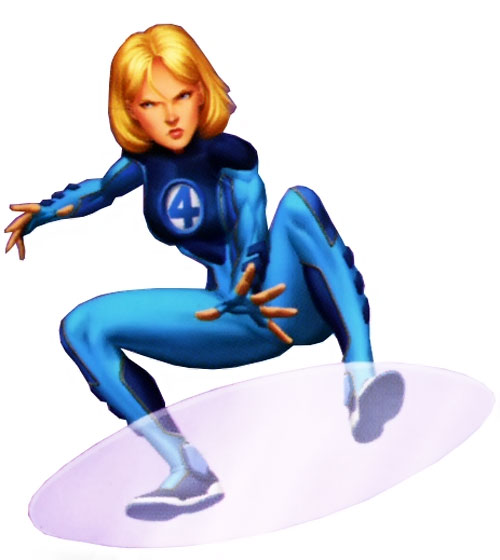 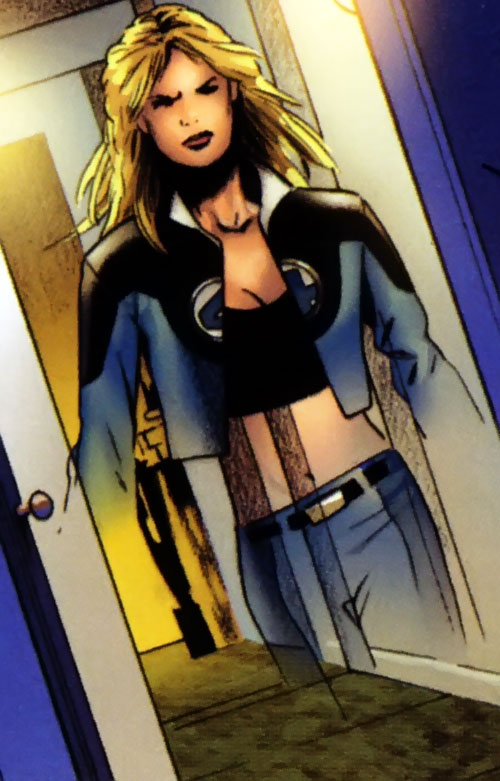 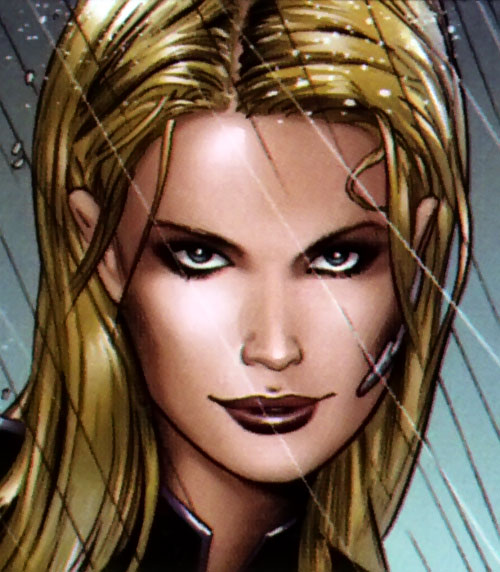 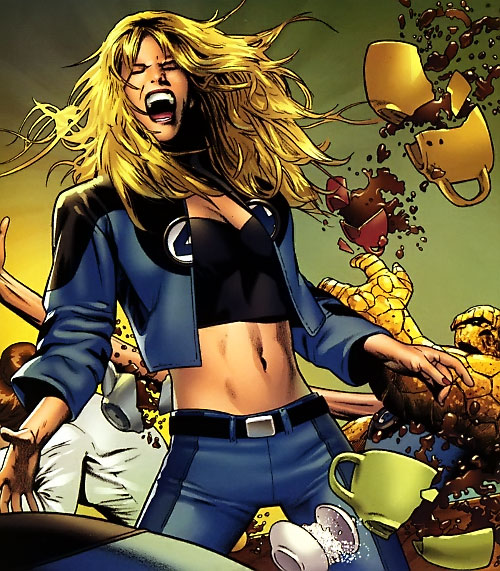 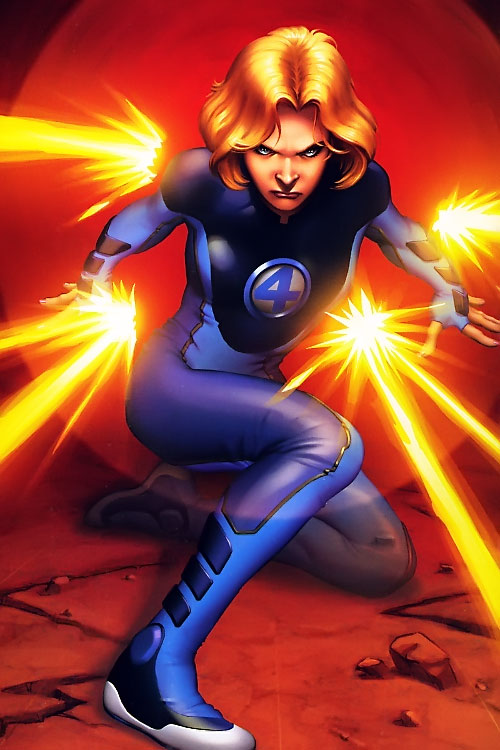