I.Q. (Ira Quimby) is a very DC Comics Silver Age  villain, first seen in 1963. These notes represent his scattered XXth century appearances, as they were taken before the bulk of his 2000s/2010s semi-unexpected returns.

Ira Quimby was a small-time crook, and not a very good one. His fellow thugs nicknamed him “I.Q.” because of his initials, and because of his habit of proposing ridiculous, impossible schemes.

But that all changed when he was exposed to a combination of sunlight and the radiations of an alien stone.

The brilliance of the sun

Suddenly, he had the inventing skills to make his wild ideas a reality. With his newfound ability, he took leadership of his gang and began a series of high-tech crimes. He was finally thwarted by the team of Hawkman and Hawkgirl.

Over the years, I.Q. has also matched wits with the likes of Superman, the Metal Men, Batman, and the JLA.

Originally, I.Q. had to be in the presence of both sunlight and the alien rock in order to get his “flashes of brilliance”. But after repeated exposures, he now only requires sunlight.

I.Q. is a man of average height and build, with wavy brown hair.

His costume consists of a purple jacket, white gloves, a yellow scarf, black leather boots, and blue jodhpurs with a yellow stripe running down each leg. He also wears white goggles with dark lenses. His gang wear similar outfits, except their jackets are blue.

Despite his inventive genius, I.Q. is still a small-timer at heart. As long as he keeps his sights low (simple robberies, etc.) he is fairly effective.

But he is extremely cocky and arrogant, and his reach often exceeds his grasp. His Unluck represents the tendencies of his grandiose schemes to go awry, or his gadgets to not quite work the way he intended.

Over the years, he has become obsessed with increasing his intelligence further by tampering with the Sun. He believes that increased solar activity would cause a corresponding boost to his genius. Whether this is true remains to be seen.

Drawbacks:
SIA (Increasing his intelligence), Unluck, Loss Vulnerability (I.Q.’s Mental Attributes drop to 2 APs and his Gadgetry Skill drops to 0 APs if he is not in direct sunlight.)

Source of Character: Mystery in Space #87. 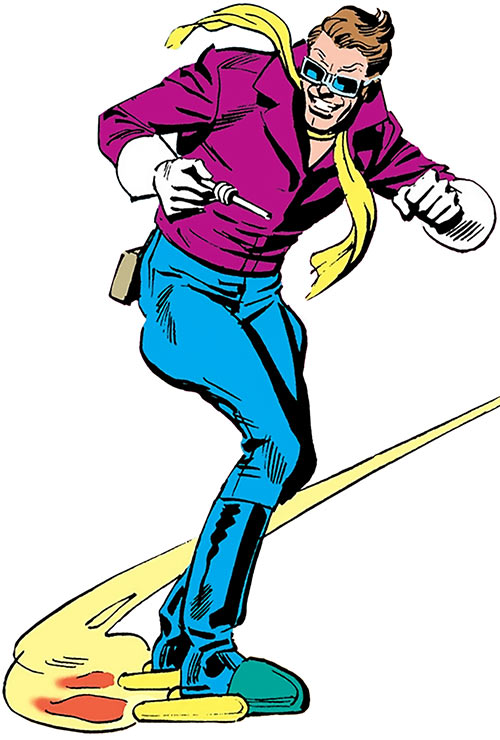