While she’s not quite at Sarge Steel’s level, she’s credible as a cinematic operative. She has what seems to be black belts in judo and ju-jitsu (preferring ’soft‘ techniques such as throws). She also can competently pilot, drive, sail, ride, etc. a wide variety of vehicles, including high-performance jet airplanes.

She quite probably has other broad Skills. In DC Heroes RPG terms Medicine (First aid), Military science (Demolition) and Thief at 05 APs are probable. But her appearance was too short for her to demonstrate more Skills than those in the stats block.

They came from the cold

Dubaya is a senior spy and usually operates with a cadre of 2 to 4 agents under her orders. These often are infiltration specialists, but she can also get heavies, technicians, pilots and other sort of operatives depending on the mission. These agents are immediately replaced when lost, by another agent already in the field (quite possibly deep undercover).

In game terms this is considered a loose equivalent of the Sidekick Advantage. These agents are not as competent as a Sidekick, but they can pop up whenever needed and have the requisite cover and skills.

In 1966, Irena Dubaya was apparently coordinating the efforts of the KGB to spy on and sabotage the American aerospace efforts. Her key agents in the field were men surgically altered to pass for American officers. They had been impersonating those men as deep cover operatives.

Most notably, she managed to have agent Ivor Guvchenko replace Lt. CmDr. Langley at the last minute. That took place just before Langley was to pilot a Gemini capsule launched by a Titan rocket. However, American operative Sarge Steel had detected Dubaya’s activities. He rushed in to arrest Guvchenko right before he would board.

After some confusion caused by Steel and “Lt. CmDr. Langley” shooting at each other in front of the television cameras, Guvchenko was stopped and identified. But he committed suicide using a poison capsule in a fake tooth.

As bold as steel

Having determined that Steel’s work as a PI was but a cover, Dubaya replaced Steel’s secretary. The goal was to keep him under surveillance and find a way to neutralise him.

Having recognised her, Steel decided to fake it. He pretended that he was unsatisfied with how much the US government was paying him. As he hoped, this spurred Dubaya into dropping cover and making him a financial offer to become a double agent.

Steel pretended to play along, and feigned interest in what the Soviets could pay. But Dubaya knew that he was trying to trick her. She actually intended to use the trap Steel was laying for her to acquire critical intelligence.

Dubaya had Steel take her to the Strategic Air Command to inspect the new Mach 6 Intercontinental Bomber program. She took numerous photos and contacting another Soviet agent. Steel then made his move, thinking he was about to trap both Dubaya and the unknown agent.

As it turned out, he had been had. The agent turned out to be Steel’s contact, Colonel Trask. Steel tried to punch the fake Trask out, but this gambit failed as he underestimated Dubaya’s skills in the martial arts. She forced Steel to surrender.

She, the false Trask, Steel and another of her agents (a pilot having infiltrated the SAC) boarded the prototype bomber and flew out.

While the caper was about to turn into a major victory for the KGB, Steel used the secret weapons built into his steel fist. He killed the Trask impostor and knock out Dubaya. After punching out the Soviet pilot he brought the bomber back to the US. A drowsy Dubaya was handed over to counter-intelligence.

Irena Dubaya did not appear again.

Generic master spy, with an extra helping of canniness and confidence.

“[Your secretary] contracted a virus ! She’ll return as soon as she recovers ! I’m Miss Dura, her replacement !”

“Colonel Trask, induce our friend to crawl into his coffin. I’m going forward to instruct Polenkov in what course to fly.” 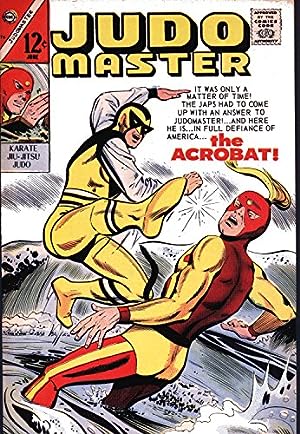 Vintage Judomaster comics… if you dare ! 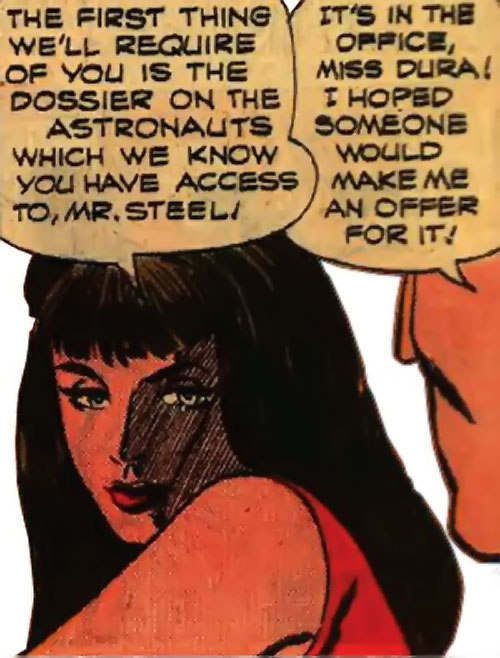 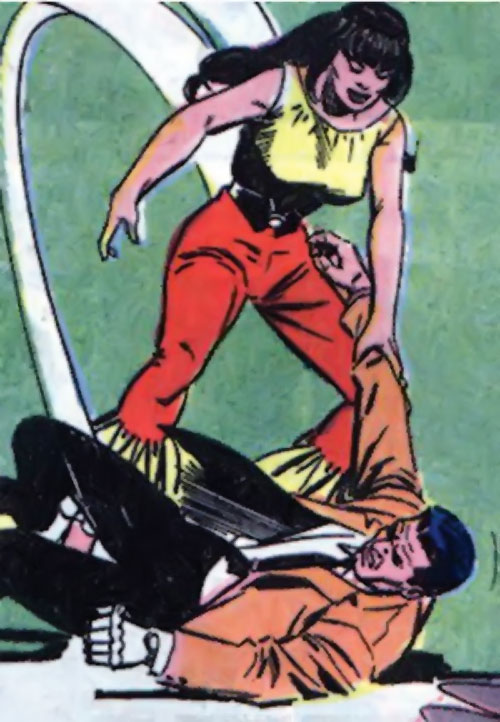 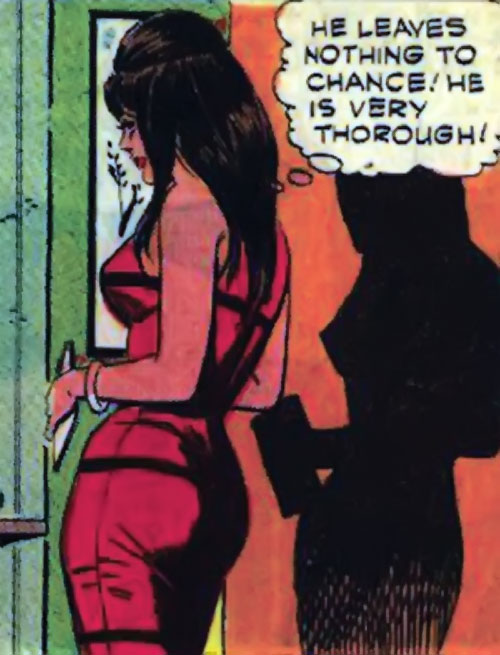