Like most such new shared super-universes it was interesting, had potential, and was ultimately short-lived.

Being half-First, Iress possesses some power, although nowhere near Evinlea’s level.

The daughter of a member of House Dexter of the First and a mortal, Iress was abducted to another universe. She found herself stranded on a planet with 99 other individuals from various parts of his own universe. She was now in the Negation Universe, and the locals referred to her provenance as the Bright Universe.

One of the powerless prisoners, Kaine, convinced them that they had been brought there for testing by hidden observers. The prisoners agreed to follow his lead. His lead led their captors to bringing them into the prison proper, where they underwent further lethal testing.

Allowing Kaine to again take the lead, they broke out of the prison and seized a craft. Iress was aboard when it lifted off before most of the prisoners were aboard, its automated systems taking over.

He is the law

Days later a group of other escapees stumbled across them on a lifeless planet. Evinlea immediately attacked them for their perceived abandonment. The conflict was soon ended when cooler heads discussed the matter.

Before they could decide on their next course of action, they were attacked by Lawbringer Qztr, one of the elite of the Negation. After easily handling even Evinlea, the Lawbringer apparently slew Javi. Qztr was distracted from killing them when he discovered baby Memi to be completely immune to his attacks, and abducted her, taking her to the Negation god, Charon.

Evinlea and Iress surrendered to the Battle Group as a ruse to acquire information. Evinlea then ingratiated herself to Murquade by apparently betraying Iress, claiming she was willing to trade the location of the others in exchange for a way home.

When Murquade contacted Charon to relay the offer, they could see Memi with him. Evinlea immediately sent a telepathic message to Kaine, which Murquade and Charon unfortunately overheard.

When Murquade threatened retaliation, Evinlea feigned concern that Iress should take none of the blame. This prompted Murquade to shoot Iress in the face. Before he could do anything to Evinlea, the Battle Group came under attack from the Australians it had been hunting.

Taking advantage of the confusion, Evinlea found a portal back to her universe in the ship. But Iress destroyed it before she could use it. Iress rebuked her for her betrayal of Memi, and kept the scar Murquade’s attack had left her with as a memory of this. That was even though her half-First blood would allow her to heal it.

Rescuing Memi and Gammid, although the Australians were killed and Kaine was missing for a short while, the escapees fled the homeworld. When they heard from Kaine soon after, they had to stop at a nearby planet to try and acquire some tech to get to him faster than their ship would currently travel, as they’d be unlikely to get to him in time as it was.

They rescued Kaine, and he convinced them to try and help free the resistance leader, held in a secure prison facility. The mission cost Matua his life, further embittered some of the escapees against Kaine.

Iress was among the escapees who decided to find a quiet planet where they could try and make lives for themselves.

Quiet and loyal, Iress was initially lacking in confidence, overwhelmed by her new circumstances, and particularly nervous of Evinlea.

Her irritation with the First eventually got the better of her, though. She proved a capable fighter when her powers became usable in the Negation Universe, helping her colleagues however she could.

Evinlea: “The blood of my people flows in your veins, Iress. You should have healed long ago.”
Iress: “The wound will heal, Evinlea. The day you take responsibility for causing it, and not a moment sooner.”

A collection of refugees from the mysteriously vanished New Genesis and Apokolips found a new planet on which to live together in an uneasy truce, where they renamed themselves ’The First‘.

Bonuses and Limitations:
Regeneration may be prevented from healing wounds at will (+0).

When she first arrived in the Negation universe, her powers were subject to the wild energies of the place until she became used to them.

During this time, any attempt to use a Power (or Ritual) runs the risk of a Catastrophic Burnout, with the Burnout of an offensive Power resulting in Area Effect (1 AP Range) Energy attack centred on the character at the AP level of the Power, to which they are also subject. 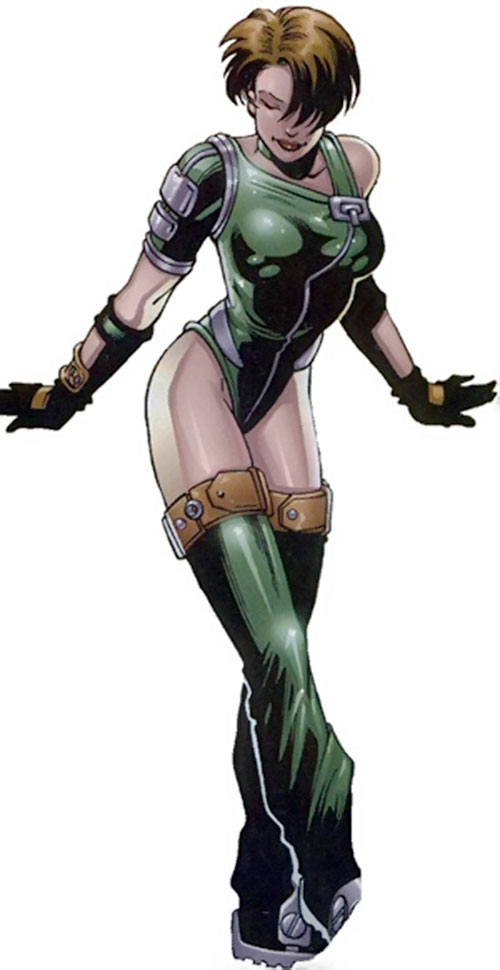