Iron Hand is a DC villain with a strange career. He first appeared in 1941 as a fairly typical Golden Age  villain. But he unexpectedly returned in 1972, as the mastermind behind an epic crossover. In 1972, epic crossovers weren’t the norm, so that was a notable JLA story.

The Hand was established as a major enemy of the Seven Soldiers of Victory. This led to his (unexpected again) return in 2005 in Grant Morrisson’s epic about the Soldiers. Morrison’s storyline was also drawing from older weird cosmic DC stories, including the aforementioned 1972 one.

At his peak, the Hand was a dreaded crime lord. His cruel and ingenious ways meant that even major criminals such as the Red Dragon feared and obeyed the Hand.

It also allowed the Hand to gain the services of some of the hardest killers of the 1930s. Men who would kill cops in broad daylight with Colt Monitors and tommy guns.

He was apparently well-versed in engineering, chemistry, physics and other scientific disciplines.

Although many would believe the Hand exaggerated his own importance, it would seem that he was indeed a major and influential criminal mastermind during the 1930s. He planned and executed daring and imaginative crimes, and always eluded the police. However, he eventually became sick. In 1941, the doctors told him he had but one month to live.

This was intolerable for the Hand. His monstrous ego demanded that his genius live on and that his fame extend beyond death. He assembled a band of famous, gifted criminals. Then he gave them the blueprints of incredible crimes he would never have time to commit. In this way, the Hand’s intelligence would still evoke fear and admiration through worthy disciples.

Setting in motion ’sinister underworld forces’, the Hand swiftly busted out of prisons the Red Dragon, Professor Merlin, Big Caesar and the Needle. He then saved the Dummy from a police raid. Those men agreed to become the five fingers of the Hand and to carry on his perfect crimes.

Then they raised the stake, by ensuring that each perfect crime would be opposed by a mystery man.

They shot out challenges to the Spider, to the Shining Knight, to the Star-Spangled Kid (and Stripesy), the Vigilante and the Crimson Avenger. And thus the Hand assembled the Seven Soldiers of Victory (in the pre-Crisis continuity, Green Arrow and Speedy were there instead of the Spider).

Each hero or pair of heroes defeated their opponents. Then the Hand challenged the soon-to-be Soldiers to come to his house and catch him, knowing it was full of traps.

However, minutes later, his doctor called, telling him a procedure had just been developed to cure his ailment. Now fighting for his freedom and not just for his pride, the Hand tried to kill the heroes. But he seemed to be accidentally killed when he tried to fry them to a crisp.

The Hand survived, though he lost his right hand and had to replace it with an iron prothesis. Now usually calling himself the Iron Hand, he was not seen again until 1948, when he semi-accidentally managed to summon the Nebula Man. This creature was looking for seven soldiers to kill.

The Hand was only too happy to arrange for this. Contacting the Spider (whom he had learned was secretly a crimelord), he arranged for the other Seven Soldiers to attempt to kill the Nebula Man. The Soldiers were provided with a super-weapon, but it had been sabotaged. This trap likely would have killed the heroes.

However, two of their sidekicks discovered the truth and confronted the Spider. The first, old Billy Gunn, was killed by the archery assassin. But the second, young Wing, defeated the traitor. He then raced toward the heroic Soldiers with the missing part of the super-weapon.

Repairing it, he then sacrificed himself to destroy the Nebula Man. The cosmic energy being released catapulting the Soldiers out of time.

In the mid-1950s, the Iron Hand was the head of the One Hand Gang. It had a mano negra-style emblem . But he was captured for the first time by Greg Saunders (the first Vigilante) and his ally the Whip (Rod Gaynor). They took away the iron prosthesis he had developed to replace his hand.

During this case Saunders violently threatened members of the One Hang Gang, the Lupelino brothers. He told them he’d kill them if he saw them or “their kind” around here. Solomano assumed this was a racist insult toward Latinos, and swore to kill Saunders.

It is not until 2005 he learned he was mistaken. Saunders had sensed what Solomano had not, that the Lupelinos were werewolves. By “your kind” he meant lycanthropes.

But we only have 48 hours to save the Earth !

The Hand came back once again in 1972. Using cosmic energies similar to the Nebula Man’s, the Iron Hand manifested a gigantic alien hand around the Earth-Two. He then gave Terrans 48 hours to submit to him and declare him master of the world, or be crushed.

Even the JSA did not manage to disrupt the unimaginably vast hand. But at that point the JLA, celebrating its 100th meeting, had their scheduling meeting with the JSA.

From the Oracle, the mystics learned about the last hurrah of the Soldiers of Victory. They also sensed how they had been banished into the corridors of time, making them disappear from Earth’s memories. Oracle then send mixed JSA/JLA teams on a famous adventure. They were to recover the Soldiers and bring them back to the present.

(Oracle may have been Aurakles, arguably the first super-hero on Earth. Back then he likely was chained under New York City by a Sheeda-manipulated Fatherbox. Thus, I’d suppose the spell cast by Fate, Zatanna and the Thunderbolt is what broke his chains. And thus made him, who was worshipped as a god by the witch-people of Limbo Town, free again for a while).

This is the hand, the hand that takes

Using sophisticated surveillance equipment, the Iron Hand saw that under the guidance of the Oracle the JSA and JLA were making rapid progress. They would crack the case well before the cosmic hand could crush the Earth.

As his counter, he sneaked into the JSA’s headquarters. There, the Hand took the depowered Diana Prince hostage. But Diana severed his iron hand with a karate chop and took him down with a judo throw.

By wrecking the hand she had destroyed the controls of the closing cosmic hand. However, the Seven Soldiers remembered how to built the super-weapon that could destroy cosmic energy like the Nebula Man’s.

The Red Tornado, considering itself as the most expendable person of both teams, sacrificed his life to charge the super-weapon. It then disrupted the cosmic hand, ending the Iron Hand’s dastardly, megalomaniacal plan.

Apparently, the Hand never escaped from his high-security prison, though he continued to work with his family.

In 2005, one of his nephews told him about a classified in a magazine for superhumans. The aged Vigilante was rounding up a posse to hunt a monster. Following the Hand’s orders, the nephew infiltrated the posse as a new Boy Blue. He had a special suit and used the bugle-like artefact as his weapon.

The Hand’s plan went well. The traitorous Boy Blue used the bugle to conjure the Nebula Man at Miracle Mesa. Coming through the temporal void with his Wild Ride, Nebula Man killed the Vigilante and his entire team. The one exception was Solomano’s nephew, who knew what was about to happen and fled in time.

Howbeit, the Vigilante came back as an avenging ghost and spirit of the gun. He appeared in Solomano’s dreams and shot him there. Shortly after being interrogated by FBI Special Agent Helen Helligan, the Hand apparently died from the wound inflicted in his dream.

The Hand was probably born before 1910, but his ageing dramatically slowed at some point. One suspects that conjuring the Nebula Man in 1948 exposed him to chronal energies that made him younger by about 20 years, and allowing to age quite gracefully after that.

A grandiose crimelord with a gigantic ego. The Hand is certain he can use his superior intelligence to triumph over super-heroes. He sees himself as a Napoleon of Crime. In his mind he’s a ruthless, cruel, greater-than-life figure even Death will not dare touch.

However, he insists that he holds everyone in contempt in an equal manner, and that racists are worse than he is. In particular he hates prejudice against Latinos.

After he was arrested for decades, he had a lot invested in his memories and his ’glorious’ past. Helligan knew that, and had the Bulleteer start wrecking his stolen iron hand in front of him. This instantly destroyed his tremendous confidence and led to his confession. Plus, Solomano suspected he would die soon from having been shot by the ghost of the Vigilante.

“Dying ! Me — the Hand — the greatest criminal the world has ever known ! What a pity ! The Hand – a Napoleon of crime whose master-strokes have stunned the world ! An enigma the police have never solved… and now, a doctor too stupid to cure me brings down the curtain.”

“You are fools ! Because you have outwitted my fingers, you think you can defeat the Hand ! Very well, I shall prove that you are wrong.”

(1972) “They move so slowly, the hands of the clock — almost as if they were taunting me — telling me I will not succeed ! But they are wrong — dead wrong ! The Earth will bow before my demands — and the Iron Hand will hold dominion over all !”

(2005) “Anyway, you know my story ? They told me I had a month to live and I went a little crazy. Sixty years, one major crimewave, one revenge strike on a superhero team, and one almost successful attempt to rule the world by force later… the Hand still stands. There were times I got to wondering if death himself was scared to come too close.”

(2005) “Did I tell you Saunders came to me… or something that was once Saunders came to me in a dream, last night… something like a dream. He rode across the howling desert on a black cycle out of Hell. And he shot me. Not here. Not in the heart. The Vigilante shot my soul.”

Advantages:
Expansive Headquarters, Language (Spanish), Stroke of Genius (the iron hand prosthesis he built in the 1940s). Before 1941 he had Mystique (American Underworld).

Drawbacks:
Secret ID, SIA toward having a tremendous ego, MIH of racist attitudes (especially toward Hispanics). After 1941 he has a SPR (missing one hand), and he finally gained Age (Old), probably in the 1980s.

Since the Latinx community seemed important to him, I’ve assumed he spoke Spanish. 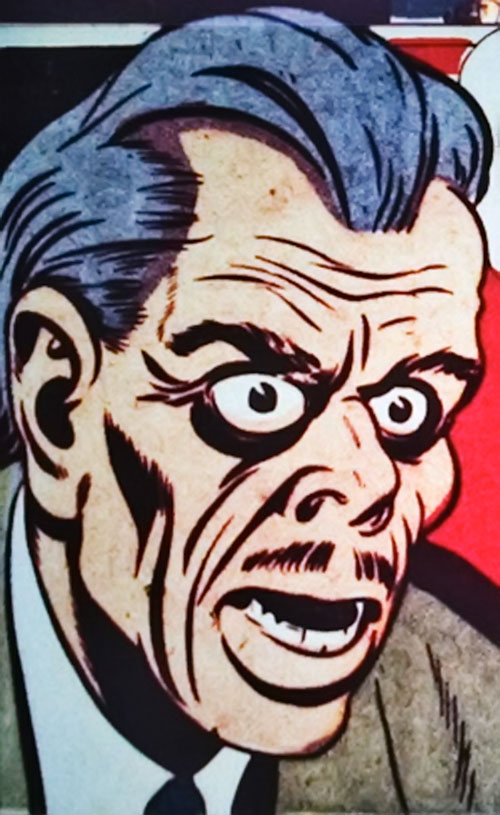 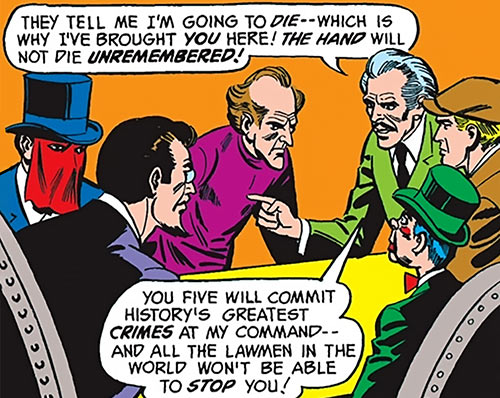 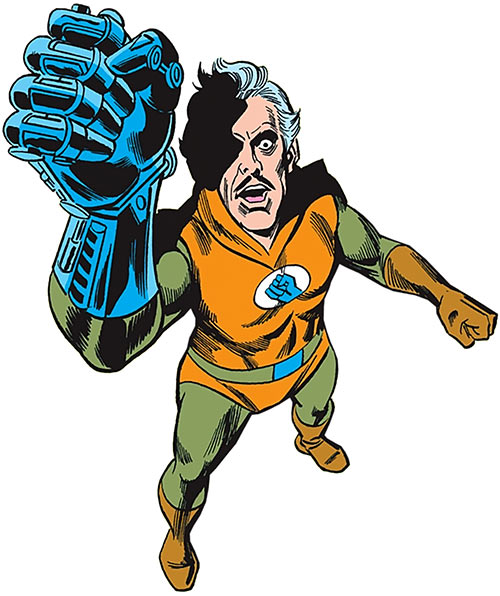 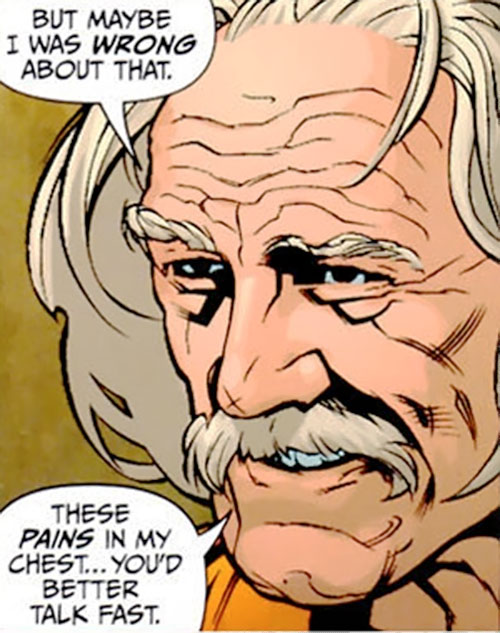