The Iron Maiden is a skilled KGB assassin. Her suit of armor makes her nearly invulnerable and superhumanly strong.

She is also a weapons expert — for instance she is a superb knife thrower — but usually fights suited up but unarmed. Iron Maiden masters at least two martial arts forms – boxing and an unspecified hard style of kung fu.

Against street-level opponents, Iron Maiden can simply forego defending, walking right into their attacks to hit them. Her suit lets her ignore the damage and she has the training and experience not to flinch. In game terms :

If Vostokovna’s not sure that her armour can take it, she’ll fight with more attention paid toward defence. This was the case when she fought Paladin, as she didn’t know his exact level of strength.

While the suit officially can lift 1,000 lbs., she can punch or kick a large hole through a thick stone wall, and once punched Joystick clear through a building’s roof. The 1960s version could decapitate and dismember Veda’s stone animates. Our game stats therefore use a higher level of strength.

The Iron Maiden identity was apparently used by a succession of Soviet agents during the 1960s, 1970s and 1980s.

Reusing the code name and costume of a fallen, retired or missing agent was apparently common for the USSR, and continues to be done in Russia.

The first known Iron Maiden (name unrevealed) was active during the early 1960s. She joined a special project where a number of super-agents were put in suspended animation on an island near California.

This unit was to be automatically activated when a nuclear detonation was detected in California, to act as a clean-up crew. It was assumed that such a detonation meant World War Three. In 2007, the explosion of the Infernal Man woke them up and they flew into action. The Soviets were met by the recently-formed super-team, the Order.

The Americans dispersed their foes. The Iron Maiden was sent skipping over the Pacific by the super-speedster  Calamity. Her odds of survival are good, though.

Be quick or be dead

Melina Vostokovna worked as a KGB agent and assassin during the 1970s, and possibly before. 2011 secondary sources indicate that she’s from the mining town of Serov (in the Sverdlovsk Oblast ).

By the early 1980s she was a freelance agent. She seemed dissatisfied with her KGB work, as her achievements were overshadowed by the exploits of the star female Soviet agent, the Black Widow (Natalia Romanova). 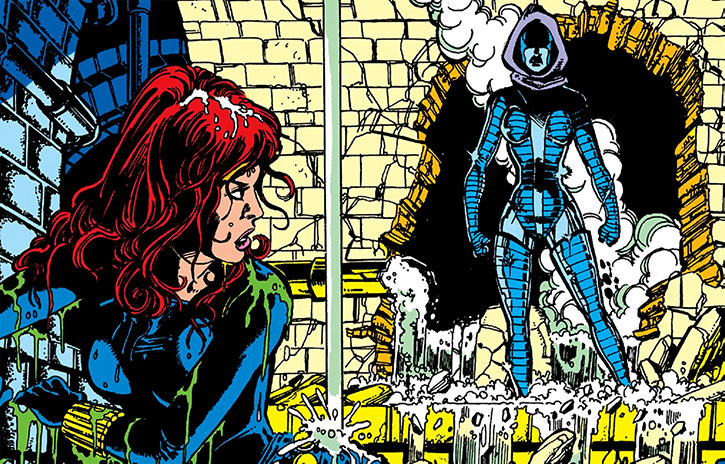 In 1983, when Damon Dran aka the Indestructible Man recruited a colourful team of killers and mercenaries to eliminate the Widow, Vostokovna happily took the contract. While this team briefly captured the Widow, she ultimately defeated them all… except for Iron Maiden.

Vostokovna was beating Romanova until James Woo and other S.H.I.E.LD. agents came in, forcing her to flee. They chased her into a nearby sewer where she almost killed them, but Woo and the Widow triggered a whirlpool that sucked the Maiden away.

Fear of the dark

By 1991, the Iron Maiden was working as a henchwoman for Superia and her Femizons, joining them on their special cruise. She once fought Paladin and had the upper hand, but she and her allies were defeated off-panel through unknown means.

Iron Maiden remained in the employ of Superia, along with Snapdragon (Sheoka Sanada) and Blackbird (Heather O’Gara).

However, Snapdragon was killed by Diamondback, and Iron Maiden and Blackbird failed to protect their employer against the powerful MODAM. Superia was rescued by Captain America (Steve Rogers) and apparently did not rehire Vostokovna and O’Gara.

From here to eternity

In 2006, during the Civil War events, Iron Maiden was attacked by villains working for the American government as she was trying to leave the US. She fought Joystick while Mach IV and the Fixer watched, and was reportedly arrested.

In 2010, a woman using the Iron Maiden code name and a variant on the armour was a member of the Remont VI terrorist cell, operating in Russia. From her dialogue she *might* have been the 1960s Iron Maiden who, in dismay over the fall of the USSR, joined the reactionary Remont organisation. 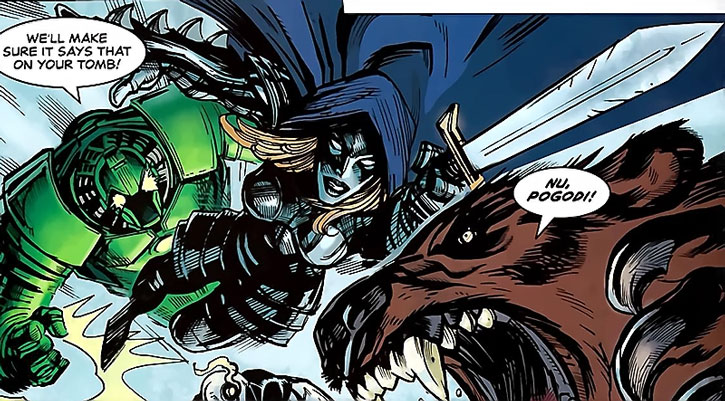 Remont VI was attacked by the Winter Guard, and disappeared in an explosion accidentally triggered by Darkstar (Sasha).

2011 secondary sources list the Remont VI Iron Maiden as Vostokovna, and state that she was imprisoned at the Mantlov facility.

None of the Iron Maidens was ever seen without their full suit. The version of the armour where the hair is visible was worn by the Remont VI member in 2010.

A cold, relentless assassin. She loves to utter long and elaborate threats, taunting her opponents and flouting her efficiency and invulnerability.

Aside from that quirk and her hatred for the Black Widow, she seems quite professional and competent.

“You fool. Don’t you see how futile it is. I can withstand any assault. Any. I am the Iron Maiden.”

“Enough of your toys. You’re mine.”

“What a fitting place for your defeat, Natasha. You, who were always held in awe by your contemporaries ; who received the highest accolades in your profession – will meet your end in the lowliest of surroundings, amidst the stench of a common sewer.”

Drawbacks:
MIH of the Black Widow.

The 1960s Iron Maiden, when briefly seen in 2007, seemed to have similar stats to those of Vostokovna above.

The Maiden who was seen in 2010 — quite possibly the same person — wielded a broadsword : [BODY 08, EV 04 (12 w/EV)]. She did not seem to have the Relentless Schtick and did not seem as martially proficient as Vostokovna. However, this is difficult to tell in the absence of numbers for the Red Guardian (Anton) who fought her.

The 1960s Iron Maiden, when briefly seen in 2007, seemed to have similar stats to those of Vostokovna above.

The Maiden who was seen in 2010 – quite possibly the same person – wielded a broadsword. Diminish the Close Damage from the armour by 2, and add a basic sword as equipment (the total damage is now 12, but that doesn’t change her PL). She did not seem to have Seize Initiative and Improved Initiative, and did not seem as martially proficient as Vostokovna.

However, this is difficult to tell in the absence of numbers for the Red Guardian (Anton) who fought her. 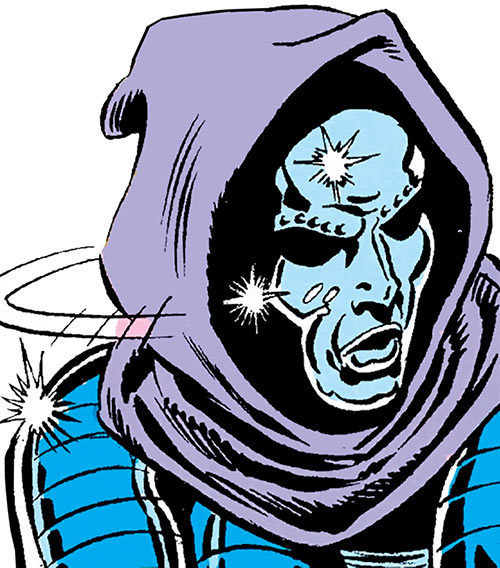 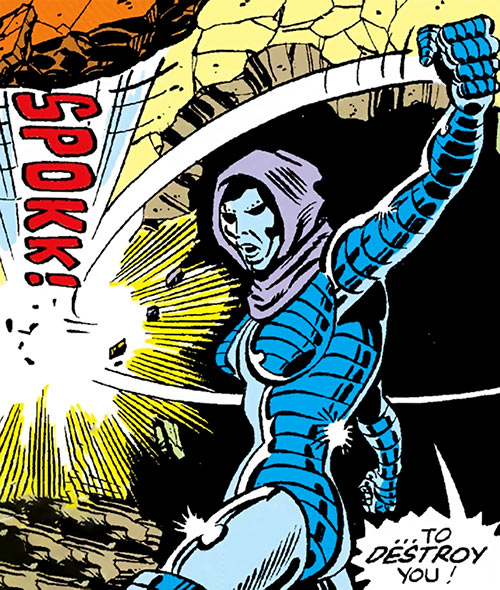 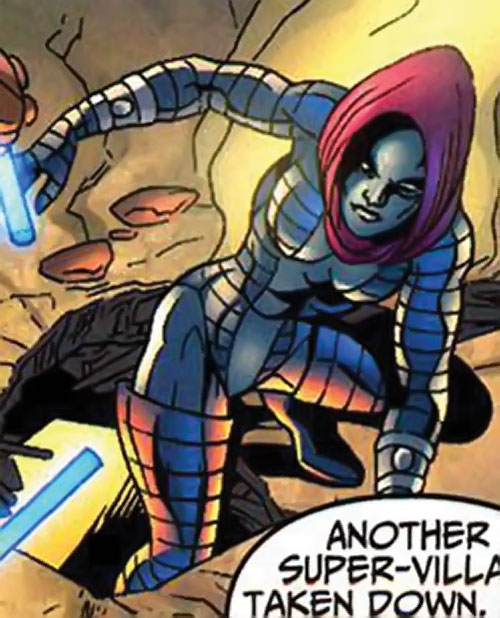 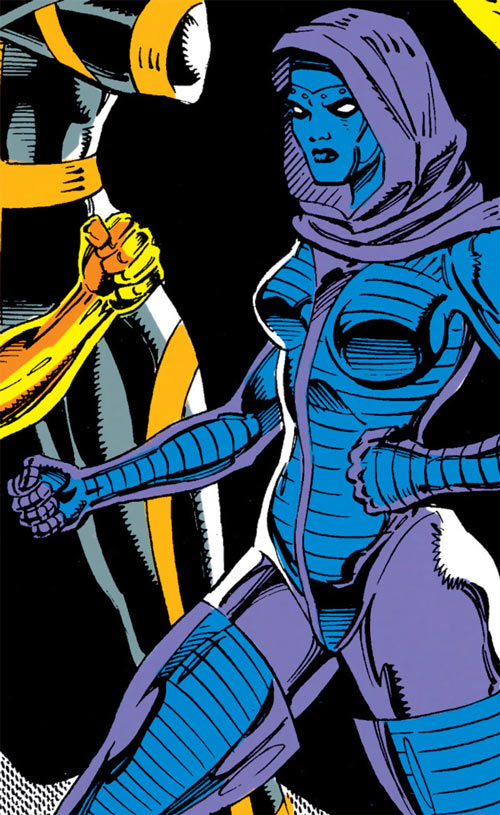 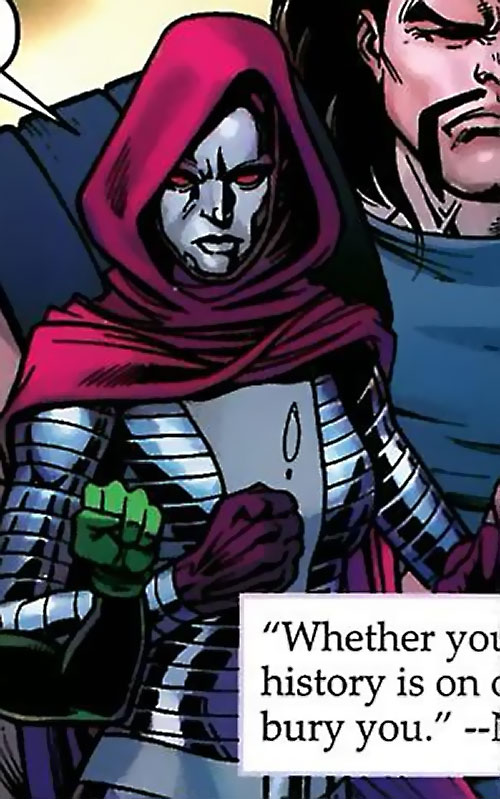 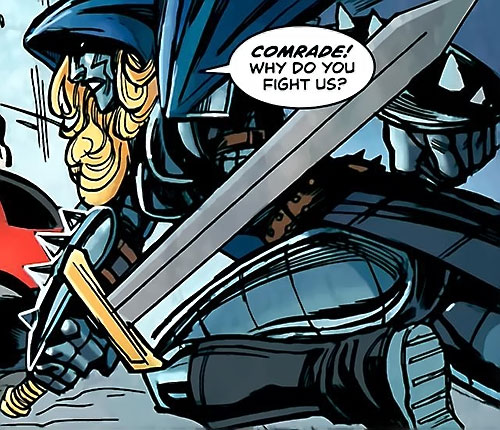