The Iron Man Mark VII “Silver Centurion” is a much improved update to the Mark V “Golden Avenger.” (The Mark VI armor was a simple grey armor constructed by Stark shortly after his recovery from alcoholism.)

The famous “repulsor ray” (Energy Blast) is a concussive plasma beam fired from the palms of the gauntlets. The chest-mounted “Uni-Beam” (Flash and Heat Vision) is used as a secondary weapon. The armor retains the limited magnetic capabilities of the early repulsors (Attraction/Repulsion).

Boot jets allow the armor to fly (Flight). The armor has a built-in air supply and nutrient recycling system (Sealed Systems) and protection against light- and sound-based attacks (Shade). The armor is stiffened by a force field for increased resilience (Skin Armor) so that the armor no longer has any special vulnerability to corrosive and magnetic attacks.

The armor’s force field may be temporarily boosted (Force Field), although the protection is short lived (Catastrophic Burnout).

The armor is equipped with a host of sensory and communication devices (Radar Sense, Radio Communications, Sonar, and Thermal Vision).

The armor scrambles the user’s voice so that the identity of the wearer remains hidden (Actor).

Improvements over Mark V include a holographic projector that allows the armor to blend in with its surroundings (Invisibility). The armor is also equipped with a security system to prevent outside control of the armor’s systems (Security System).

Finally, the armor contains a disruptor field in the gauntlets (EMP).

The armor is mostly solar powered (R#0), with power modules distributed throughout the armor’s circuitry and in the backpack. These modules replace the power pods present in previous armors.

The Mark VII “Silver Centurion” armor is the red-and-silver armor worn in the mid-1980’s. It was only worn for 33 issues from Iron Man (vol. 1) #200 through Iron Man (vol. 1) #232. However, the distinctive color scheme as well as the well-received “Armor Wars” storyline fixes this armor in the minds of Iron Fans everywhere.

The armor was originally constructed as a therapy project as Tony Stark recovered from his second, more serious bout with alcoholism. The emergence of the Iron Monger and retirement of Jim Rhodes (Iron Man II) prompted Stark to put his latest armor into service.

Stark served with the West Coast Avengers until he discovered that his technology was used to enhance the abilites of most of his armored foes.

Enraged by the act of thievery, Stark embarked on the “Armor Wars,” seeking to disable or destroy all Stark based armors worn by friend (the Guardsmen) and foe (most everyone else) alike.

The accidental death of Titanium Man II combined with Stark’s vigilantism attracted the notice of the US Government. They sent agent Firepower in a specially designed suit to take out Iron Man. Badly beaten in combat, Stark retreated to a helicopter.

Stark faked Iron Man’s “death” by remotely piloting the armor into the path of an oncoming missile. This destruction ended the active service of the Mark VII “Silver Centurion” armor.

For all maneuvering purposes, Iron Man usually uses his Vehicles (Exotic) skill as AV and OV unless he is choosing to substitute Flight as his evasive OV that phase. The armor also gives him increased speed (Enhanced Initiative) and the option to allow the computer to control his movement (/DEX/). Iron Man’s total Initiative score reflects both of these effects.

Iron Man’s /BODY/ score, modified by Energy Absorption and Skin Armor as appropriate, acts as his RV against physical attacks. Any damage taken by Iron Man is split between the armor’s BODY and the user’s BODY, not the user personally (Hardened Defenses per BOHSE rules).

The armor ceases to function upon reaching a current BODY condition of 0 APs. Any damage has to be repaired manually in a workshop (an action done using Gadgetry and any adequate Scholar advantage). Another more costly and immediate option is for Iron Man to pay up HPs and do a Desperate Recovery Roll for the armor.

For all practical purposes, the Iron Man armor has indefinite power supply. Repairing of components is done in a Workshop, unless trickier field repair is attempted (costing HPs). If Iron Man resides in an alien environment for an extended period of time, he will likely suffer from a Power Loss Subplot (à la Secret Wars). 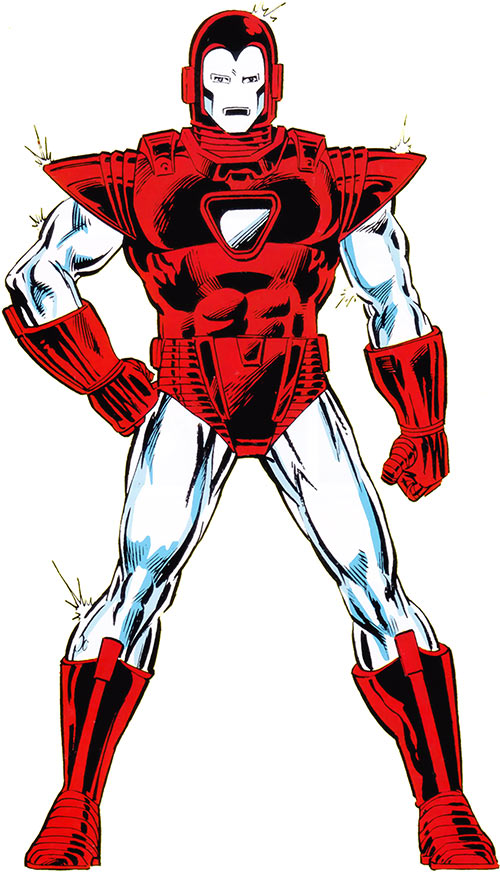 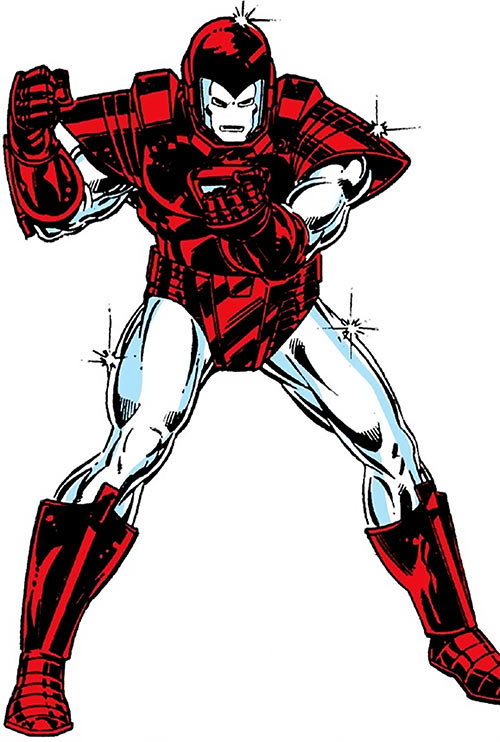 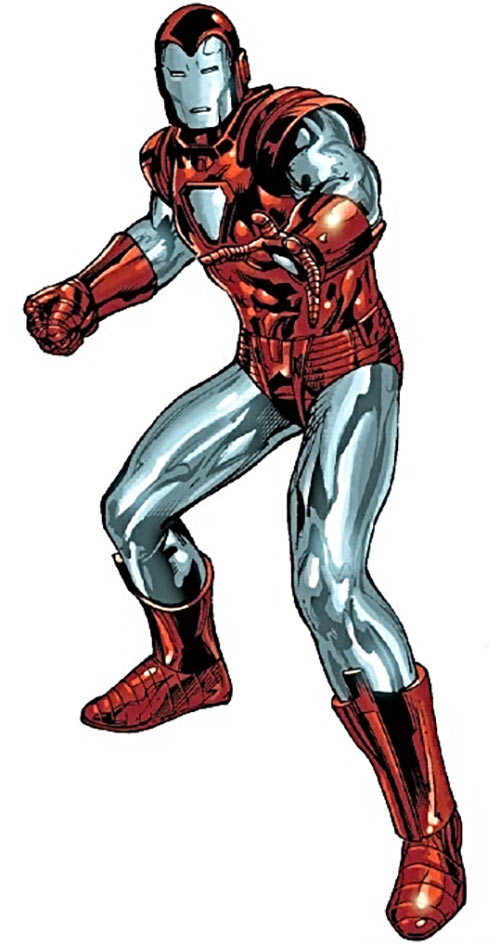 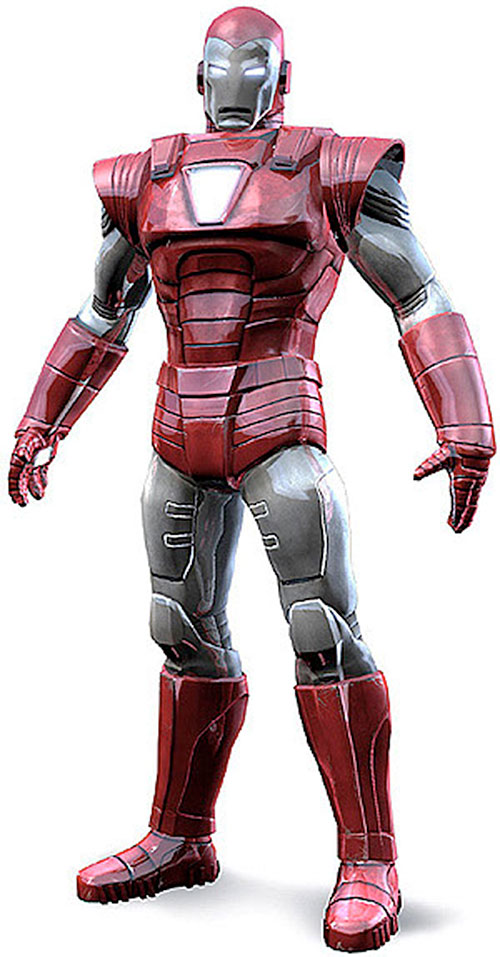 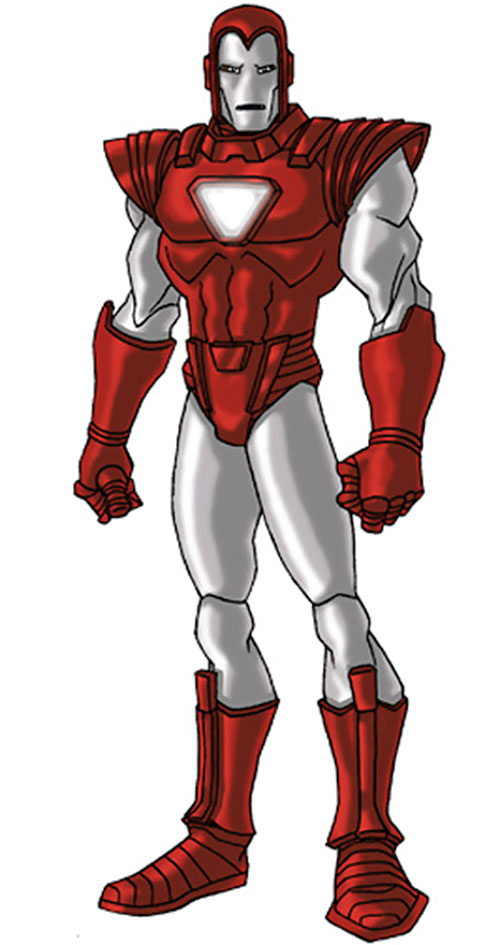