This armor is the forerunner of them all, an original suit of armor incorporating the vital cardiac circuitry within its chest plate.

The M1 Mk1 has a semi-rigid interior and a 3-D knitted metallic exterior. It is powered by a flat linear armature DC motors, and uses negative feedback body motion sensing (“body english”), as opposed to a cybernetic interface.

A number of attachment have already been built to greatly expand the armour’s possibilities.

This profile only describes the very first armour. Stark has occasionally built “throwback” suits resembling the Mod. 1 Mk. 1 but these had different specifications.

Likewise the suit he built upon returning to the US (Mod. 1 Mk. 2) was different, though for a little while it had the same general appearance.

Finally, some later depictions of what was supposed to be the original suit were retcons (as is often made clear by the fact that they occur in Afghanistan). Here, we stick with the 1960s material, though some technical descriptions are based on Eliot R. Brown’s 2008 texts for colour.

Iron Man also once unfastened his lubrication system to squirt a jet of flammable oil over several dozen meters. That was presumably the entire, pressurised oil supply of the armour that was flushed out. One imagines that Stark had to quickly refill the tank after that.

The outer shell pieces were built using a programmable 3D mechanical loom. It was loaded with a 40-mile spool of fine mono-crystalline iron wire coated with tetrafluoroethene plastic. The code was done on punched paper tape by Stark, who also came up with the general concepts and structure of the suit. There are reasons to think that the ETFE coating was done by Yinsen using an unique personal technique.

All the circuitry was created using Professor Yinsen’s direct-write electron beam device to machine sheets of silicon, using Stark’s designs. It represented 200 transistors per square inch, plus wiring and the like. This original integrated circuitry was called “micro modules” by the 2 technologists.

The e-beam was also used to machine fine systems such as the air jet turbines, without creating heat distortion within the material (usually a ferrous-ceramic billet). 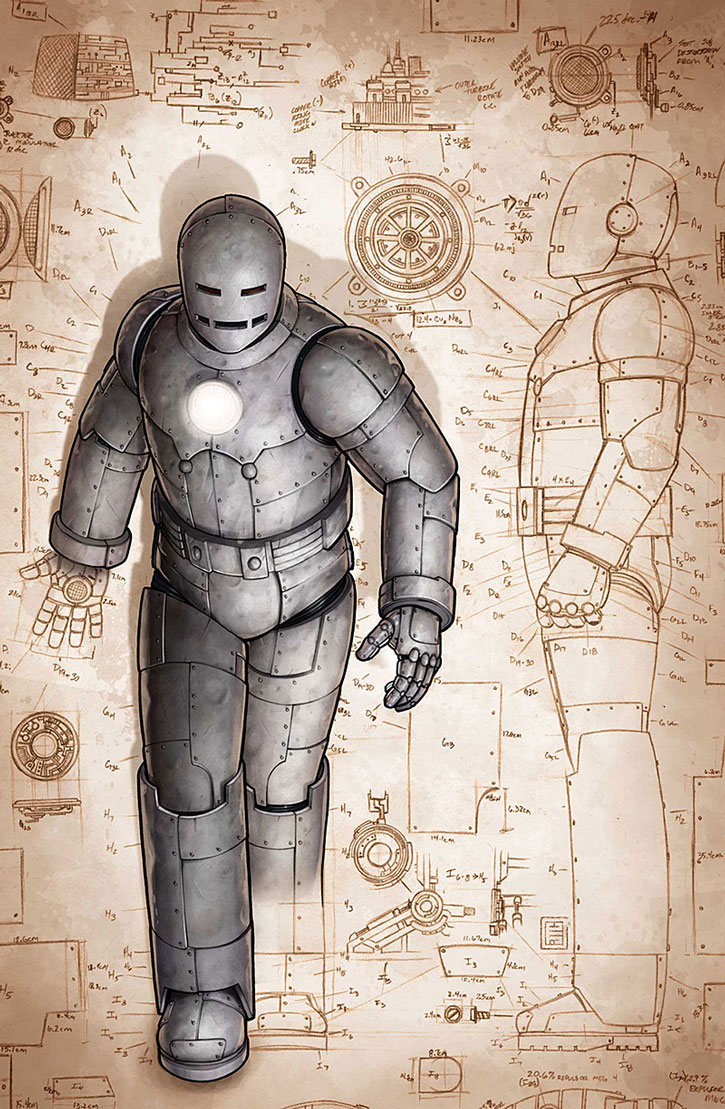 The suit had dozens of Yinsen’s powerful, flat DC motors. For instance each glove had a dozen, being the most articulated parts. The micro modules associated with each micro motor worked either as pulse-code modulated drivers, or as a power amplifiers. Each micro-motor could thus deploy up to 1 horsepower.

The body motion sensing within the suit was done by Stark using an array of small silicon levers. This crude system likely explained his initial difficulties in moving whilst wearing it.

Yinsen’s designs also included the defibrillator circuit and flat antenna within the chest plate. It monitored and stimulated Stark’s vagus nerve to stabilize the sinoatrial node’s bioelectric impulsion rate. Presumably the goal was to slow down the heartbeat whenever it went off the rails.

Unlike some later Iron Man suits, the original required familiarization to operate. For a completely untrained operator, even walking is in DC Heroes terms a Difficult DEX/DEX task. Simply standing is Challenging at first.

Stark could familiarize himself with the operations within minutes, but most operators will likely need an hour or so to fully erase the penalty. After 15 minutes or so, the penalties for ordinary operators would be down one step on the Universal Modifier Table.

Though the suit is clunky, Stark was markedly more physically adept (for instance in hand-to-hand combat) than without it once he was familiarized with it. For less gifted operators though, reaching this level would take lengthy training – this is the Vehicles (Power Armour) Subskill in action.

Drawbacks:
Attack Vulnerability (-1CS OV/RV vs. magnetic attacks), Serious Bulletproof Syndrome (from lack of mobility), MPR (land speed capped at 2 APs), Misc.: the armour is somewhat vulnerable to rusting, being made of coated iron, Misc.: the armour is very noisy of running on a hard surface such as concrete.

The depiction in Iron Man Vol. 1 #144 is different, though it’s supposed to be the same suit. For this retconned-but-not-too-much version :

The MPR isn’t clearly demonstrated – it’s more of an inference.

Running out of power

At this point, Stark’s armour can still run out of power – leaving him very weakened, and possibly triggering his Fatal Vulnerability if the pacemaker becomes inactive.

This always happens after an extraordinary effort depletes the batteries. In game terms this is thus keyed to Hero Points spending. Use the following table :

“Dice Action raised…” is the total of the AV+EV boost taken on a given Dice Action.

“AV/EV cap” indicates the maximum APs the armour can now deploy on both Dice and Automatic Actions – there isn’t enough juice left to perform above that.

The R# increase is cumulative – every time an HP expenditure on this table is made, the R# rises by the stated number. Note that rolling under the R# will trigger Stark’s Fatal Vulnerability.

The armour can be repowered with a small amount of electricity. Two flashlight batteries were once sufficient, though it was with the M1 Mk2 armour. However this is gradual. One Phase of draining will raise all AV/EV caps by 1, and lower the R# by 1 (with a minimum equal to the baseline R# of the armour). 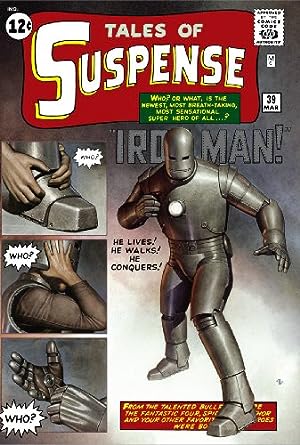 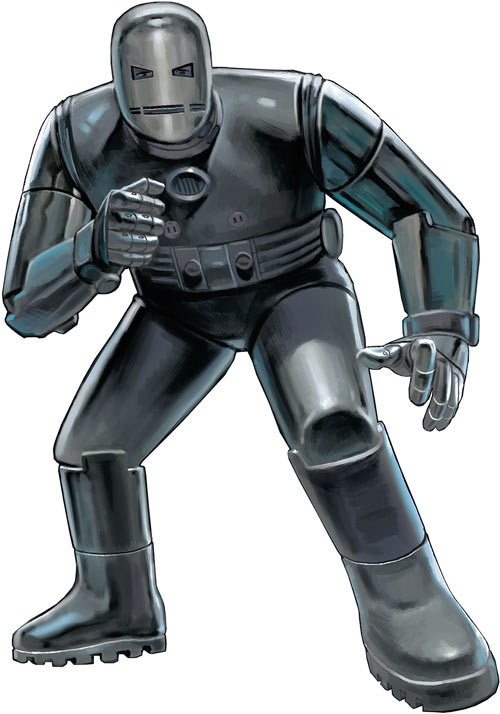 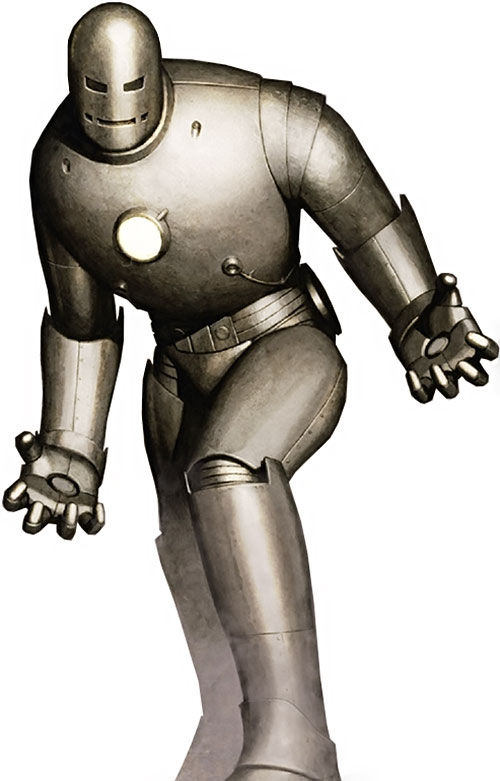 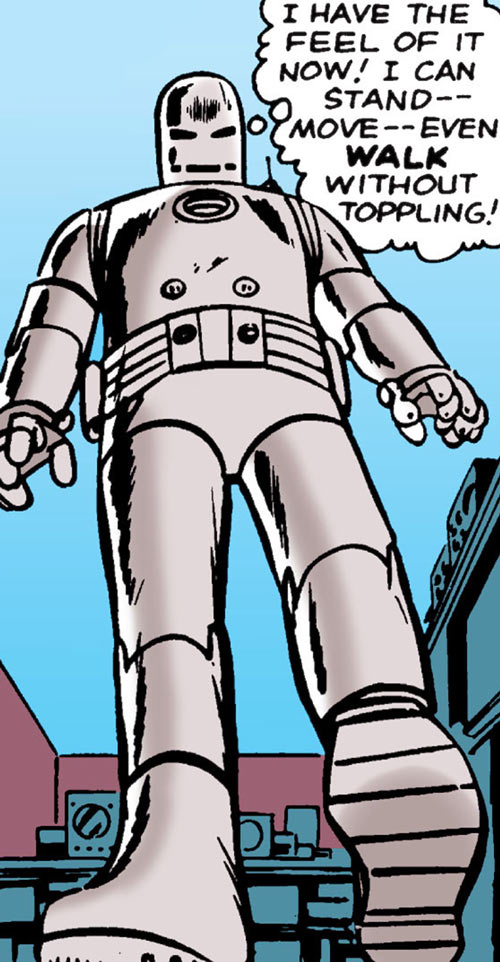