This is the suit that Stark built once he returned to America. Though it retains the same general look and concepts as the M1 Mk1, it is much more sophisticated and powerful.

Early on, the suit keeps its grey iron exterior, and can be easily confused with the Mod. 1 Mk. 1 “Grey Armour” suit. Stark soon gives it a less sinister colour and this suit thus becomes known as the “Golden Armour”.

The exterior is solid iron, and the plates are now milled rather than knitted. The tetrafluoroethene plastic coating is gone, creating a clear vulnerability toward corrosion. Perhaps this sort of coating was a design of Professor Yinsen that Tony Stark could not replicate right away.

The joints that cannot be protected by plating now have a layer of chain mail to reduce the weakness they represent.

The motors are now flat solenoids, and it uses solid state electronics rather than the artisanal “micro modules” machined back in Việt Nam.

Only a few improvements have been mentioned :

With the exception of the chestplate, the components of the suit (boots, helmet, etc.) are all collapsible. They can be stored flat as if made of fabric, and put on in seconds by a trained operator – somehow becoming rigid, bulky power armour as they are unfolded from storage.

During its very first appearance, the M1 Mk2 suit seems mid-powered – a clear improvement over the M1 Mk1, but not earthshaking. However, Iron Man then starts being depicted as being crushingly powerful, able to casually overcome most man-made obstacles and war machines.

The new systems are :

Stark can also carry various powerful mission-specific gadgets, some of which seem to draw power from the suit. Most of these devices are good for but one or two uses, and are stored in the suit’s utility belt. Examples include:

Iron Man once turned his pectoral searchlight into a heat beam, then hurriedly build a micro-furnace. However this was kit-bashing based on available components (in DC Heroes terms, Trick Powers).

The suit is less physically cumbersome than the crude Việt Nam one, with faster motors and better padding. However, the amount of information received via the proto-HUD is overwhelming and requires lots of training to adapt.

The DC Heroes rules for piloting the first suit thus still apply. Fully overcoming the penalties might even take *weeks* for a person who has never used a HUD, which would be essentially everyone back during the 1960s.

Advantages:
Misc.: include an unique cardiac support system, Misc.: the suit can use its full STR to break free when encased in something, even if Stark cannot move (it’s done with tiny jet blowers distributed across the armour).

Drawbacks:
Attack Vulnerability (-1CS OV/RV vs. magnetic attacks), Minor Bulletproof Syndrome (from lack of mobility), MPR (land speed capped at 3 APs), Misc.: the armour is quite vulnerable to rusting, being made of actual iron, Misc.: the armour is very noisy if running on a hard surface such as concrete. 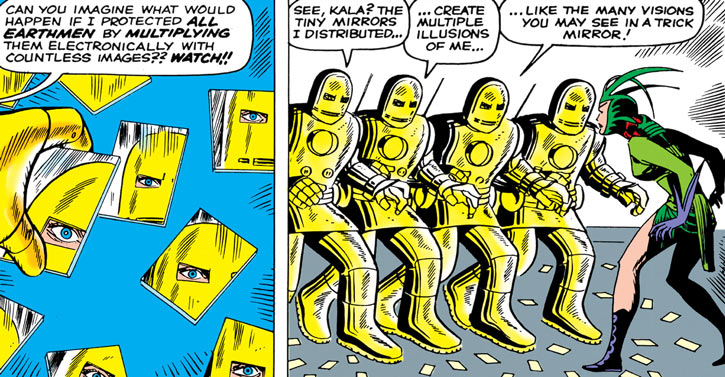 Running out of power

At this point, Stark’s armour can still run out of power. This’ll leave him very weakened, and possibly triggering his Fatal Vulnerability if the pacemaker becomes inactive.

This always happens after an extraordinary effort depletes the batteries. In game terms this is thus keyed to Hero Points spending. Use the following table :

“Dice Action raised…” is the total of the AV+EV boost taken on a given Dice Action.

“AV/EV cap” indicates the maximum APs the armour can now deploy on both Dice and Automatic Actions. There isn’t enough juice left to perform above that.

The R# increase is cumulative. Every time an HP expenditure on this table is made, the R# rises by the stated number. Note that rolling under the R# will trigger Stark’s Fatal Vulnerability.

The armour can be repowered with a small amount of electricity. Two flashlight batteries were once sufficient. However this is gradual – one Phase of draining will raise all AV/EV caps by 1, and lower the R# by 1 (with a minimum equal to the baseline R# of the armour). 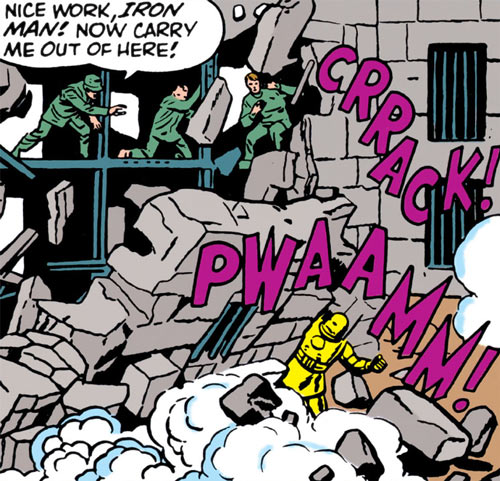