Ironheart fought in the battle in Washington, D.C. against massive Hydra forces. After this failed, she joined the Underground resistance against the Fascist regime. It was led by the Black Widow (Natalia Romanova) and Hawkeye (Clint Barton).

When the leadership splintered, Ironheart was among the young heroes who backed the Widow. The others were the Wasp (Nadia Pym), the Falcon (Joaquin Torres), Spider-Man (Miles Morales), Vivian Vision, and the Hulk (Amadeus Cho). This unit was nicknamed the Red Room.

The youths refused to use the Widow’s lethal tactics, with…. mixed consequences. But when the rest of the Underground was reported slain, they agreed to go with the Widow’s assassination plan.

Though superbly plotted, it went awry at the last second. The Widow sacrificed herself so Morales wouldn’t become a killer, and the Red Room team was apprehended.

When the tide markedly turned against the Hydra regime, two mercenaries (Taskmaster and Black Ant) decided to switch sides. They freed Ironheart and the rest of the Red Room team. This allowed the young heroes to link up with : 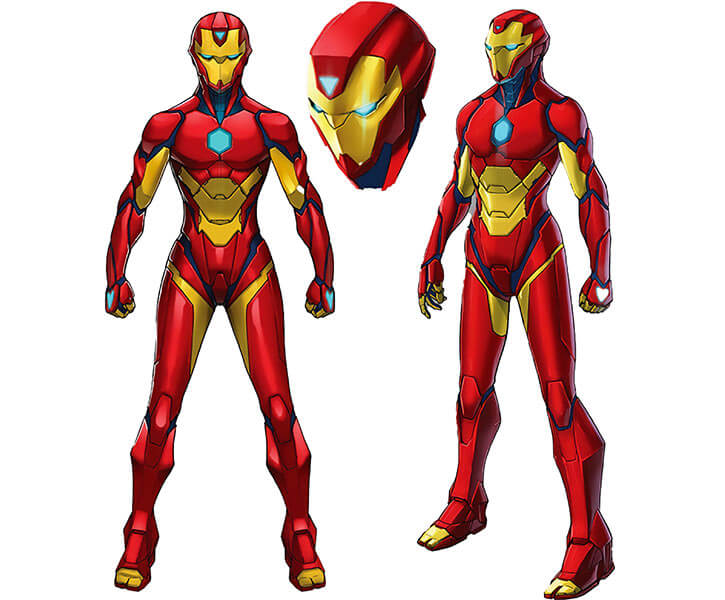 Though it was touch-and-go, the Hydra regime was defeated. The Cosmic Cube that had been at the heart of the Hydra plan was used to undo most of the damage.

(As with Civil War II, this huge event had next to no impact on Ironheart’s book. Both crises might as well have been dreams, as far as this character is concerned.)

Ironheart also became embroiled in a conflict between the US and Lucia von Bardas, who was attempting to rebuild Latveria. Though she knew that she was being manipulated by S.H.I.E.L.D., Ironheart flew straight for Latveria. She fought von Bardas and won through a combination of power and deception.

Riri then spontaneously… proclaimed herself to be the Queen of Latveria. Since she had defeated the current ruler, this was receivable by the antiquated law of the land.

Her crazy, largely improvised plan worked. She had the power to back the paramilitaries who served von Bardas without killing anybody. Her intervention thus ended the confused civil war that had been ravaging Latveria since Doom left. She also was in an excellent position to force Sharon Carter to negotiate with the troops that used to serve von Bardas.

Since everyone sought peace and stability, a broad compromise was hammered out. Riri abdicated after about two days, an interim government was approved, S.H.I.E.L.D. flew in U.N. help, and a date was set for the first Latverian elections.

Former Queen Williams then slipped out of country. It all was now a matter of logistics, politics and rebuilding. But as she returned to the Stark headquarters to touch bases, she learned that the comatose Tony Stark had just vanished.

At the close of 2017, Ironheart made an appearance for the launch of the annual Tony Stark International Sciences Expo.

She and M.J. Watson also helped Amanda Armstrong fight off another takeover attempt of the company from the board. After gaining some breathing space on this front, it become possible to investigate what had happened to Tony Stark. Intuitively, Armstrong knew that her son was still alive.

A skinny, short-ish Afro-American 15-year old. She has a medium skin tone and large eyes. 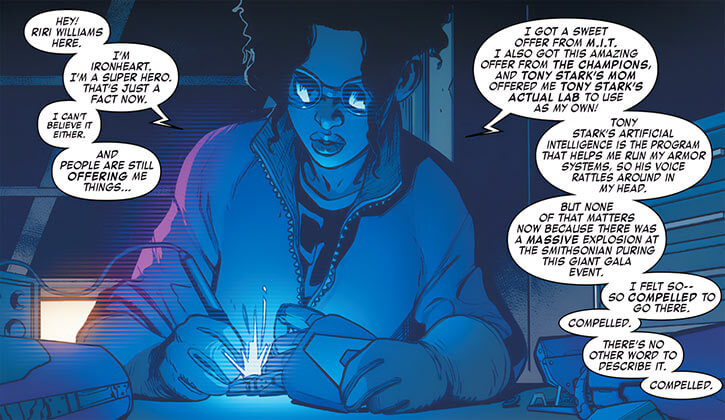 Her hair are more or less straightened, leaving them with a wavy texture. She wears them short on the sides and back but puffier on the top, with some wavy locks hanging over her brow and cheekbones. Does it still counts as a pineapple do when it’s wavy rather than kinky hair ?

(And one scene does depict her with a hair net to protect her curls whilst sleeping, which was nice.)

Riri tends to wear normcore, low-flash clothing. When wearing her armour she’ll have exercise clothes underneath, and an old pair of hi-top sneakers. She usually has a small sticks-and-pearls necklace on, which seems made of wood.

Riri is extraordinarily focused. She also needs to keep her brain running as much as possible. That chiefly means overcoming technical challenges and building stuff. While she is working, she tends to forget everything else and forego eating and sleeping.

When it comes to other matters, she’s a mostly ordinary — if obviously smart — teenager. She doesn’t have extensive life experience, interpersonal skills or forms of intelligence that aren’t focused on technical matters. Thus, she is a bit like Reed Richards.

However, her speech patterns are much snappier and more modern than Richards’. She is something of a Ms. Smartypants geek, fond of sarcasm and a bit of hyperbole. She talks real fast, and likes to argue. And given the speed at which her brain operates, she will on occasion blurt out sentences that would have taken most people a good five minutes to write.

Riri thrives on challenging her intelligence. Especially if that involves doing something that people don’t believe she’s capable of. A lack of intellectual stimulation is her Kryptonite.

Riri was shocked by her only friend’s pointless death. From 2015 to 2017 she barely talked to anyone but her mum. Ms. Williams was solely focused on building her future heroic identity. Her future would be to act as a protector, and she was willing to forego everything else. 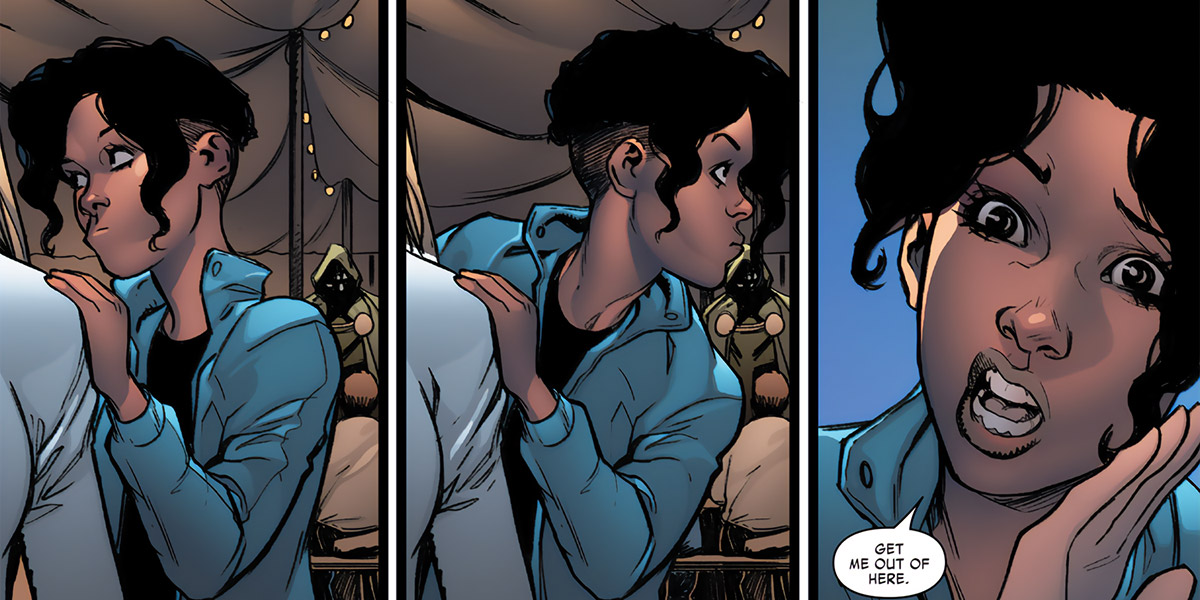 She is entirely aware that this was unhealthy as heck, and that she acted stupidly on several occasions. But she was hurt, and remained stuck in the early stages of grieving for two years. Natalie’s death was what hurt her the most, but she also came to bitterly regret all the time that she hadn’t spent with her stepdad.

Since “Stark” is just a stupid A.I., Riri is attempting to connect better with her mum to compensate for Natalie’s absence. She’s not good at this, but she’s obviously trying. She is also trying to reassure her mother about the dangers she’s facing as Ironheart.

Though Mrs. Williams is scared by what is happening, she is lucid about her daughter’s choices and supports her.

Ironheart is a beginner, and a very young one. No matter how smart she is, there are things she can’t deduce out of thin air. And her genius is specific to certain areas. So she is open about her need to get more experience, though she won’t be coddled.

Riri has basic superhuman combat training, and has undeniable courage. But she isn’t competent at it yet. She can handle a large range of situations, but high-intensity superhuman combat is a beast. Thus she will often partially disengage and fight defensively, in order to reorient, reassess and adjust.

Giant monsters and mid-powered solo super-villains (if they don’t have weird powers) are normally within her range. But she will not close these fights as fast as she’d like, then kick herself for not seeing the fight-winning move sooner.

She always fights non-lethally. She will also trash-talk a bit, but this is sass rather than insults.

Riri doesn’t seem to have any interest in romance. She generally has low social needs. She is as fond of her privacy as any teenager, but there’s… nothing to protect.

Williams likes animated movies. She will sometimes makes references to the likes of The Little Mermaid or Toy Story.

For obvious reasons she’s not fond of guns, racism or sexism. She finds authoritarian politics counter-productive, and much prefers not having to deal with the media. She has an excellent understanding of domestic and international news and politics.

Riri tends to babble and make sassy jokes when she’s stressed out. However, she is simultaneously thinking ahead and orienting herself. She can easily do all three at once.

(As several Iron Man suits are hitting her during a training exercise) “Agh ! You know, this is technically child abuse !”

Stark A.I.: “You can’t just run away from a fight when it’s not going your way.”
Riri: “I’d argue that’s the *best* time to run away, but I’m going to make it a new rule that I don’t argue with artificial intelligences. […] I swear to Thor, I liked you more when you were alive.”

“I’m not crazy, right ? Because I don’t have crazy scheduled until my 50s.”

“This is a death trap of a computer ! I’ve been in bakeries with fewer cookies !”

(To Sharon Carter, practically in a single breath) “Just because I have serious concerns and, I think, valid criticism of your systematic abuse of power in the name of global protection… does not mean I’ve taken a side *against* you. Do you really think that, if someone doesn’t like how you do what you do, they’re the enemy ?”

“Holy macaroni, we’re in Doctor Doom’s evil lab. Can I have this moment, please ? It’s my first evil lab.”

Lady Octopus: “Who the hell are you ?”
Ironheart: “Someone with enough self-worth to not have to qualify myself with ‘lady’. Seriously ? *Lady* Octopus ?”

The overlap with Iron Maiden (Natasha Irons) is considerable.

Money trees is the perfect place for shade

Early on, Riri has next to no monetary resources on her own. Her mum seems to be lower middle class class and is the house’s only apparent income.

However, Riri can tap in an unclear fashion into Stark resources to have parts made to specs and for free. So she has an unclear, virtual Wealth score for her Gadgetry, but it seems tightly limited in breadth.

She also has a computing and engineering workshop in her garage, but there can’t be any manufacturing resources in there. It’s sufficient for repairs and adjustments, and there might be about 6 APs of Lab limited to computer science applications, but that’s about it.

However, she seems to have admin rights on some Stark servers farms.

For the ghostcomp , use the stats in our Tony Stark/Iron Man benchmark article. It brings its Gadgetry, Scientist, Scholars, etc. to team up with Riri’s for technical work.

It cannot use the Vehicles (Power Armour) Skill since it’s needed to run the background functions of the armour. But if Riri is incapacitated, it can fly the Ironheart suit as Vehicles (Air): 05.

The early, large, metallic grey versions of the suit seemed to have the following stats. They weren’t seen for long though, so there easily could additional systems that weren’t demonstrated. 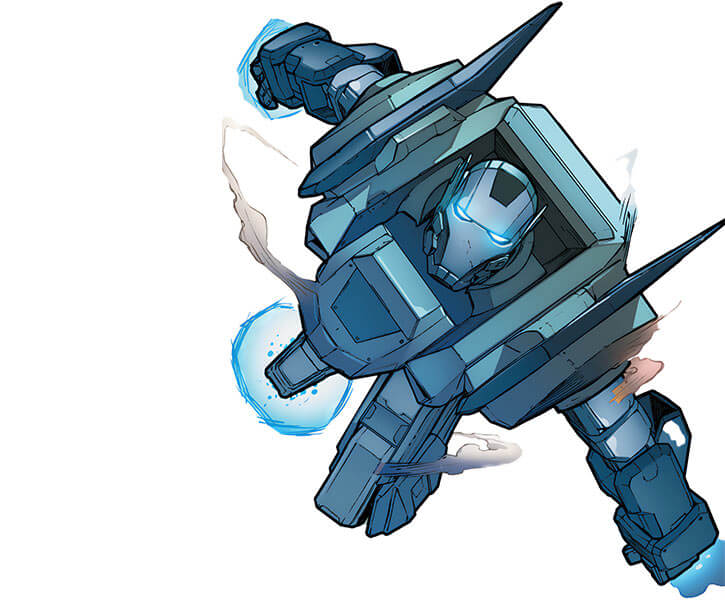 We don’t have full DCH estimates for a XXIst century Iron Man suit, so this here is strictly what was *seen* of the Ironheart suit. As opposed to reusing boilerplate Iron Man stats on the basis of commonality.

The suit didn’t seem loaded with gadgets. Its core capabilities are quite powerful, so there’s little need for exotic fallback systems. Riri is constantly tinkering with it, but this seems to be hardware and software optimisation.

Advantages:
Insta-Change (the armour can move on its own and wrap itself around Riri), Stabilization. 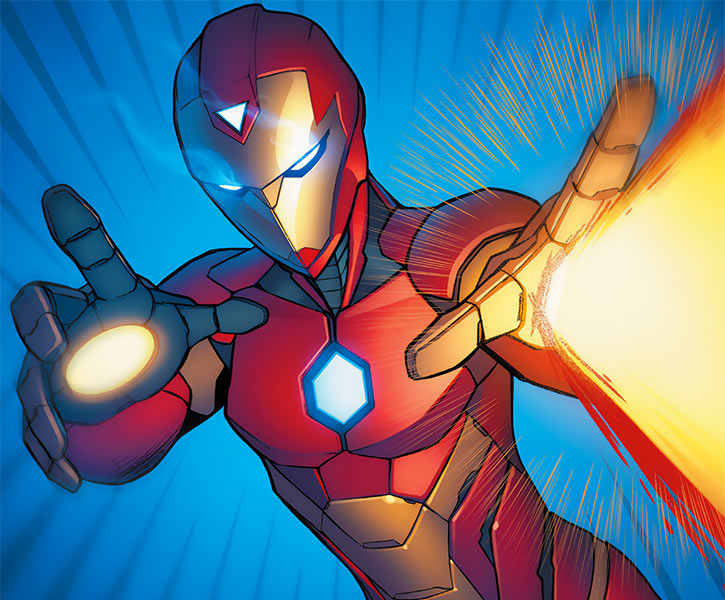 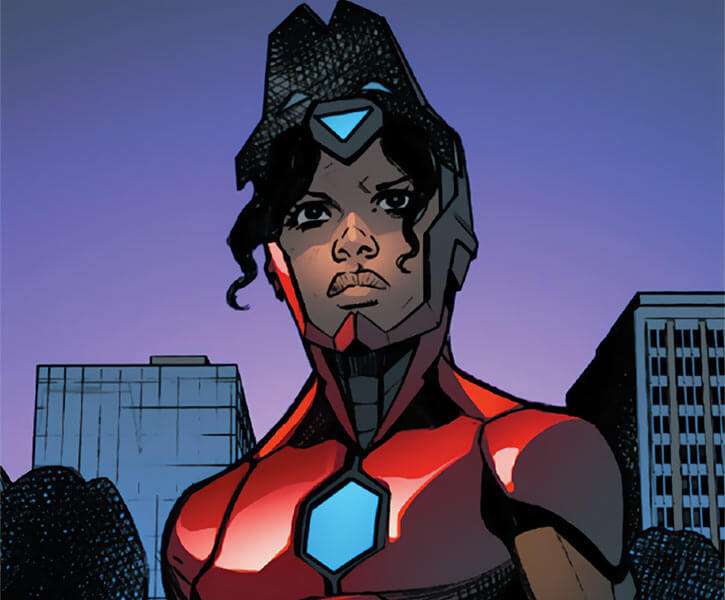 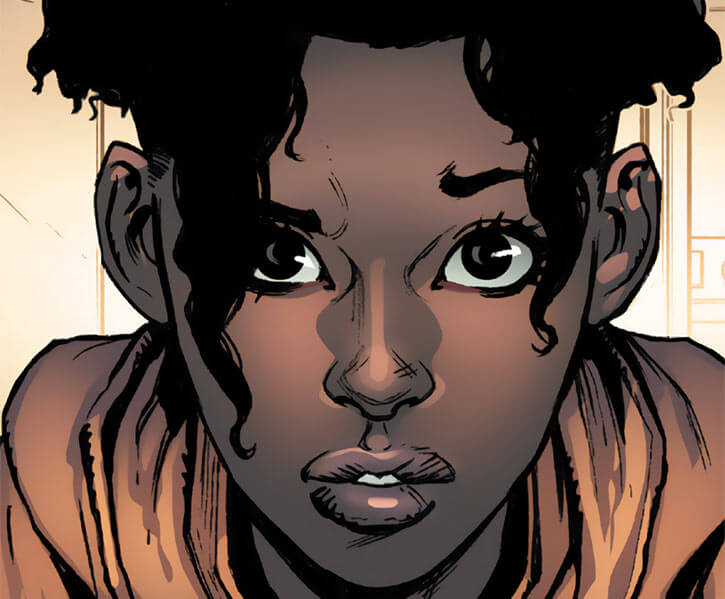 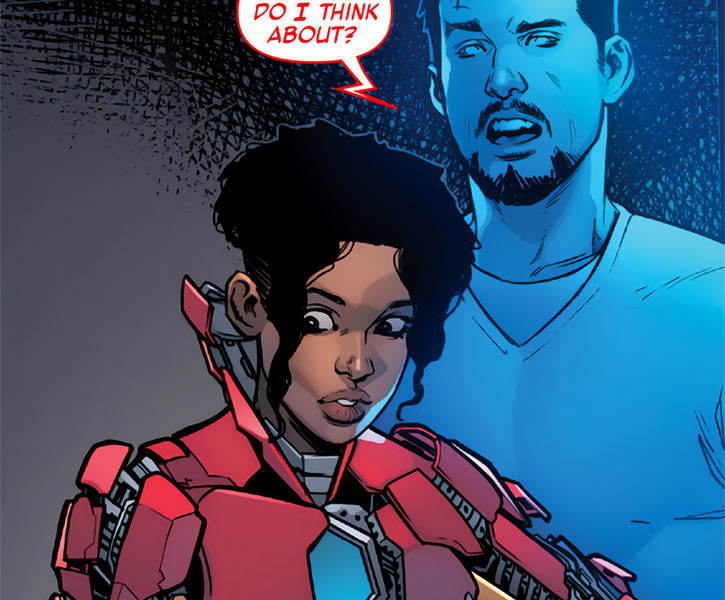 We chat and work at the DC Heroes Yahoo! group .