An interesting aspect for a 50’s film was Faith Domergue’s liberated character, Professor Lesley Joyce, who was devoted to her career and enjoyed being wooed by both lead men. When Commander Matthews rather arrogantly thought she’d change some of her career plans after he swept her off her feet with a romantic evening, he gets a great surprise!

She also insisted on staying around to help as the monster approached San Francisco, rather than being sent to safety.

“It” is an enormous radioactive octopus. It swims faster than the most advanced sea-crafts of the time. Its tentacles are powerful enough to crush steel supports. It can drag the largest ships down into the sea.

This giant octopus is not without its weaknesses. It was barely able to move on land, and was quite sensitive to fire.

In 1955, the tests for a revolutionary atomic submarine led to an attack by a gigantic sea beast. The sub, commanded by Cdr. Pete Matthews, escaped and tore a part of the mysterious creature in so doing.

After two weeks, the radioactive chunk of flesh was determined to be that of an octopus. It had been irradiated by hydrogen bomb tests in the Pacific. As fishes fled the area, the mutant had begun attacking anything it found to sustain itself.

A steamer, Honolulu bound from Vancouver, was thus attacked by the octopus and dragged down. Most hands aboard went with it but some were able to escape. These survivors confirmed the Navy’s fears. The creature was indeed hunting men for food!

In the weeks that followed the north Pacific was closed to all shipping. The sea trade between three continents came to a standstill. There was hardly a nation in the world that failed to demand through its government and press the reason for such drastic steps.

It was further announced that the United States Navy was engaged in secret maneuvers. But this actually was a cover for an unprecedented search.

A family went missing on an Oregon beach. A quick investigation there allowed Cdr. Matthews and Professor Joyce to conclude that “it” had come ashore to kill. Another clue was there were no fish in the area. The local sheriff scoffed at their sea-serpent claim. He was killed by It during the octopus’ next foray on land. 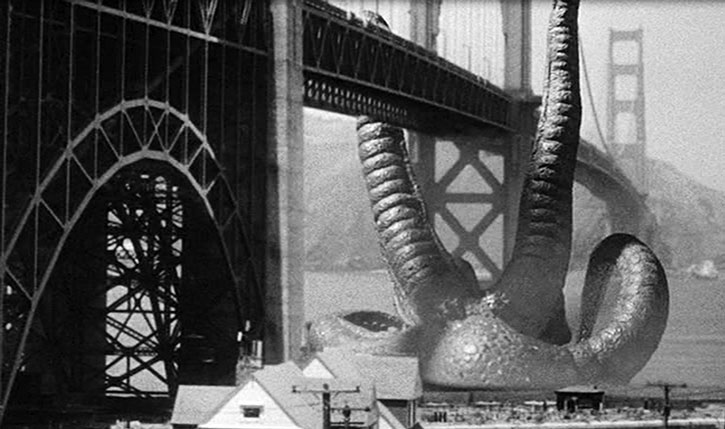 As the news spread, harbours and beaches were closed and shipping was further impacted The coastal waters of the Pacific were mined. From Panama to the Arctic Circle, the western coast of America made ready.

Radar and sonar were set up at the Golden Gate Bridge along. An electrified submarine net was also deployed to keep the monster out of the bay area.

It was decided to kill the creature with a single shot into its brain. Otherwise, the odds of “It” surviving were too high. A special jet-propelled torpedo was built to penetrate the creature’s flesh like a harpoon, to deliver its explosive warhead deep within.

Commander Matthews heroically braved this attack to switch off the net’s current. It was the right idea to stop the attack – the octopus slid back into the depths.

To kill a… mutant… invertebrate

The atomic submarine journeyed into the bay and targeted the sea-beast with torpedoes. Meanwhile, the Army used flame throwers in an attempt to drive the creature back into the sea. 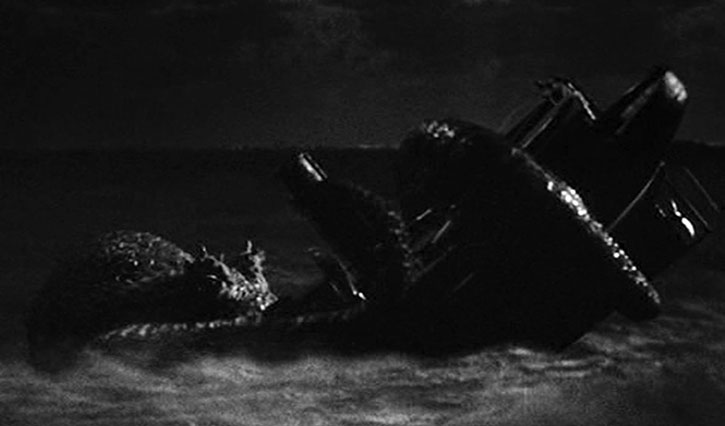 The flame throwers had tremendous effect on the beast. “It” retracted its tentacles like a child touching a hot stove. This drove the creature toward Matthews’ submarine.

The torpedo struck home. However, the sub moved too close and was grappled in the octopus’ tentacles. It took Commander Matthews and Dr. Carter to swim out and hit the creature up close with C-4 explosives. This allowed the submarine to get some distance. The torpedo’s warhead was then detonated, killing “It”.

The giant octopus’ main motivation is hunger. It will also defend itself if attacked and pursue anything it perceives as food.

A giant octopus could be challenging for sea-going heroes as long as they don’t have the power to just take control of it like Aquaman. 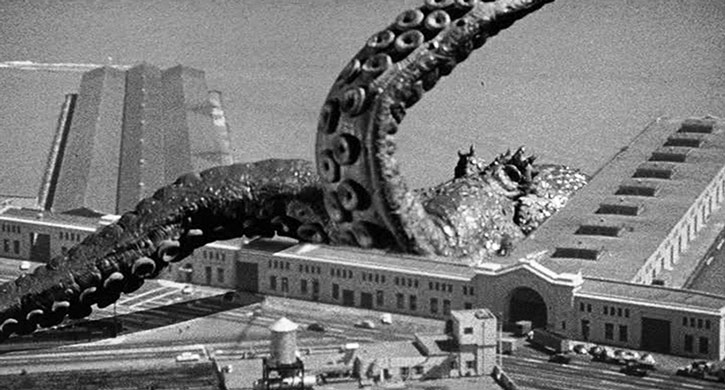 Dr. Carter: “Let’s say we do find your beast. What will you do to it then ? That’s the next point for us to consider.”
Navy Admiral: “Torpedoes if we find your monster on the surface, depth charges if it’s below.”
Prof. Joyce: “If you miss your first shot ?”
Navy Admiral: “We’ll get it with the second.”
Prof. Joyce: “It may not wait for you.”
Navy Admiral: “The Navy is not entirely incapable of speed. Professor Joyce, we’ll chase it.”
Prof. Joyce: “I think you underestimate him Admiral. The body of the largest cephalopod is like a giant sack which he can fill with sea water and empty suddenly when he’s disturbed or alarmed.”

Drawbacks:
Attack Vulnerability -1 C.S. to Fire (Common, Partial: RV only), Strange Appearance, Miscellaneous: This giant octopus produces a field of radiation that may be detected by all marine life. The range of this field is 12 APs (4 miles).

Length and Weights are guesses. I went with 4 X the length of the real-life Nautilus (the first atomic submarine) . The large boat it grabbed and pulled under I guess was close to the length of the RMS Titanic (883 feet). With the tentacles 1280 ft. doesn’t sound too bad.

Though it is likely a giant octopus would have the other powers of a common octopus. This one did not display any of them and it’s probable the makers of the film didn’t know about them or didn’t care.

STR was decided on looking at the Submarine that couldn’t be crushed and it was able to pull away. The sub has Str 19, Body 24. The large boat that was sunk I assume stats similar to an ocean Liner, Str: 20, Body 18. Looking at the chart, IT gets -4 C.S. to the Ships OV due to its extra-limbs.

Crushing an inanimate object like the boat is Str/Str vs. Body/Body. On an average roll of 11, the creature does no damage to the sub, but the same roll will do 03 APs of damage to the ocean liner. The ocean Liner was sunk in 5 Phases (30 seconds exactly).

The Miscellaneous drawback representing the octopus’ radiation field only affects certain fish with inborn Geiger counters according to the film’s dialogue but the film itself suggests that all forms of sea life, even mammalian, were able to sense its approach. Hence, the “all marine life” approach was taken.

Source of Character: The 1955 film It came from beneath the sea. 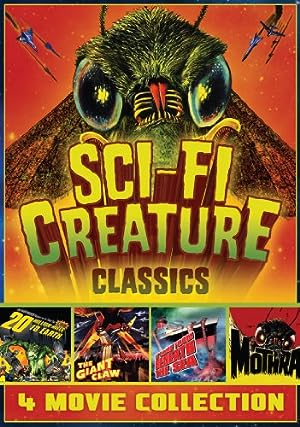 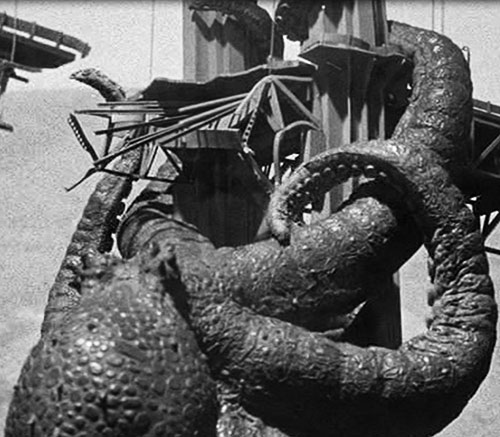