Ivana is a former top KGB spy. As such is well trained in all this job’s ways. Her key edge may be her superior intelligence.Or perhaps it is her motivation to climb the steps of power.

She later had her body completely replaced by cybernetics parts. That makes her:

The downside is that body can only be repaired.

Later on, when she has been defeated because of mental powers, she had a psi helmet incorporated in her skull plating.

Ivana was a top KGB agent. She defected to the CIA by the end of the Cold War. Her ruthlessness and ambition led her to Craven’s I.O. rapidly.

Building a network of informants, accumulating favors and digging dirt, she quickly made her way to the top of I.O.. It was done through blackmail, seduction, assassination… Eventually, she was appointed Director of Sci-Tech (Science and Technology) Division, where she was in charge of the Project: Genesis.

Her own personal agenda was to form an unstoppable force of teenage superhumans. These would be powerful enough to defeat I.O., yet young enough to be manipulated. This teenagers were the offsprings of the survivors of Team 7 (including Lynch). With the help of her boy toy, Threshold, she almost succeeded.

The problem was that Caitlin Fairchild was far from stupid and discerned the sucker play behind Calahan’s ways. Lynch, feeling that Ivana was up to something wrong, also interfered in her plan. Fairchild blasted her way in the compound, while the other Gen13 members were blasting their way out past Threshold.

After a final confrontation with Lynch, Ivana went rogue from I.O.. She took with her the other 6 Gen13 members, still cryonized.

It is, indeed, not clear if she went rogue at this time, as she took refuge in Caballito Island and could still use I.O.’s human resources. Anyway, she trained her own Gen 13 team, the Deviants, to fulfill her private agenda.

The Deviants are active

This agenda was going through the elimination of Lynch and his Gen13. Indeed, she pursued the Project: Genesis on her own, testing various combinations of booster drugs, nanotechnology … on her guinea pigs, the DV8. Her main test bed — so to speak — was Threshold, whom it nearly drove mad.

Thanks to the suicide missions of DV8, Baiul gained enough leverage within the US institutions (Senate, Government…) to finally reach her goal, the Directorship of I.O.. As she could never achieve popularity, she ruled the place with an iron fist, enforced by her personal praetorian guard, DV8.

The story ends when some I.O. executives, headed by Ben Santini, are blackmailing her with a video footage of an assault of DV8 on a CIA building.

Some time later, during the Team Achilles series, Ivana Baiul was shown to have avoided any dire consequences from her manipulations. She was now the head of Homeland Security.

She is of Caucasian type. She wears her hair in a classic fashion : tied in buns or pony tail. She has a beauty spot on the left cheek just above the mouth. She has deep brown eyes and obvious breast implants.

She always, always dress in the sexiest outfits available. Short tight dress, stockings, high heels… no problem at all as long as it is in-your-face.

She’s a ruthless megalomaniac. She would go to any extent to achieve her goals, and it’ll preferably involve sex. She’s a kind of sex addict, or gives this image. She’s so hot that even the tough Black Razors are dreaming of her leading them naked on a dog leash.

But most of all, she is ambitious. Fueled by her hatred of those who stand in her way, her ambition is boundless. She sponsors murder, blackmail, abduction, mass destruction, experiments on human beings… as long as it makes her goal closer. She in fact seems to relish in being overtly, outrageously evil.

Ivana : “Now Matthew. Just because I use you for sex, does not mean I love you.”
Matthew : “But… But I love you… I do… ”
Ivana : “I know you do. It’d be no fun otherwise, would it ? But don’t worry. There’s a hypnotic in the chemical mix. You won’t remember this.” (punches seven needles into his belly) 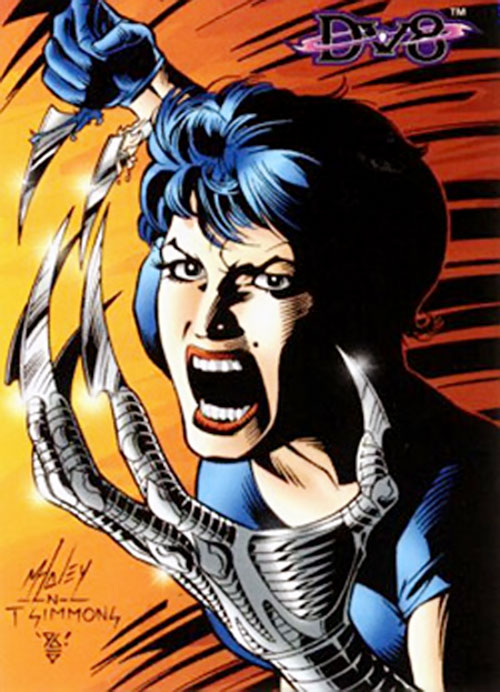 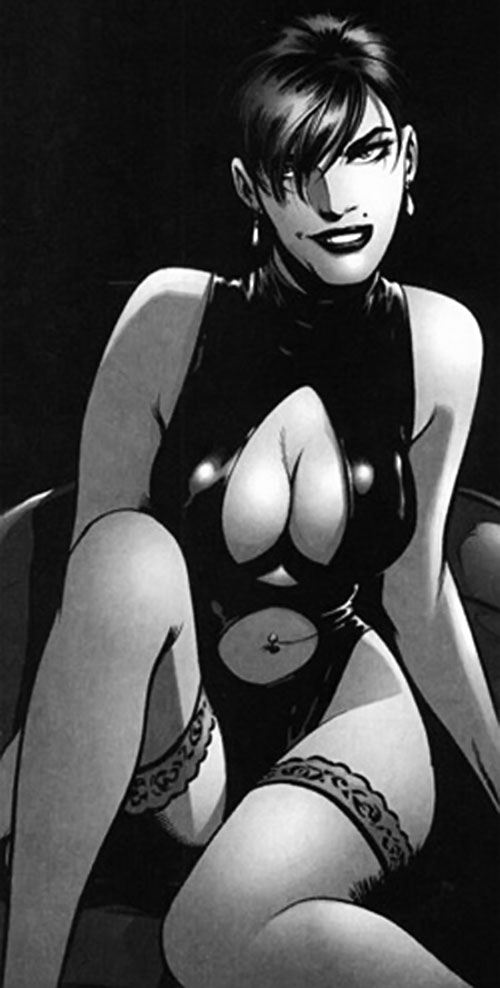