Ivy is a unique character in so many ways. She is one of the most recognizable characters from the Soul Calibur series, heavily used in their marketing campaigns. And she’s beyond hypersexualised, which I guess would be ultrasexualised.

Yet there is so much more to her character than just a pretty… face. She’s also got one of the most unique weapons and fighting styles in the games. Ivy is consistently listed as one of the most difficult characters to use, even though she’s frequently played in matches. I guess that’s what they mean by “difficulty curves”.

Her storyline is quite interesting as well.

Ivy is a world class melee fighter, armed or unarmed. But it is possible she’s less skilled than other Soul Calibur, since her movesets is harder for players to use. “Movesets”, plural, since her exact maneuvers depend upon which stance she’s using at any given moment.

However, her signature weapon is one of the best in game. This sword can turn into a whip, with the blade breaking up to form- jagged metallic segments along it. This gives her the best reach by far. She can even stab the ground and have the business end pop up further away. This allows for surprise hits, poking and harassment.

On the other hand:

Mistress of the occult

Ms. Valentine cannot quite cast spell. But she can do slow, methodical, ritualistic magic, alchemy and enchantment. She’s one of the best at this in the Soul Calibur universe. For instance, she could enchant a completely unique and mystical intelligent blade (albeit with a bit of demonic help).

Her most astounding feat was creating a new body for herself. Her soul could then migrate to it, to cheat death once her cursed lineage caught up to her. Sheer grit and dogged academic pursuit thus allowed her to gain virtual immortality.

Ivy is also skilled in other intellectual pursuits such as science, research, and detective work.

Ivy was the daughter of the dreaded pirate Cervantes de Leon. The details of both her mother and the circumstances that lead to her conception are shrouded in mystery.

She was adopted by English nobles of the house of Valentine when she was found abandoned in front of their estate. The couple decided to take her in as they were unable to conceive a child on their own.

Ivy thus grew up in a privileged and loving household. The Valentines were one of the wealthiest families in all of England. Howbeit, the Earl squandered the family fortune in seeking immortality through alchemical means. His quest apparently allowed him to find some Soul Edge fragments, fueling his obsession.

Mr. Valentine died as Ivy reached adulthood, and Mrs. Valentine followed her husband to the grave shortly after.

This is when Isabella found out that she was adopted, by reading her mother’s journal. From there she read her father’s journal. This is where she learned of the Soul Calibur, a cursed legendary blade said to feast on souls. She could see how this legend had sent her once prosperous house into ruin. She develop a strange, seemingly inexplicable yearning to destroy Soul Calibur.

Ms. Valentine made it her sole mission in life to destroy the accursed blade. But to do so she would need her own magical weapon. She tried her own spin over Asian designs of segmented whips, but conventional means failed. Therefore, she studied both alchemy and sorcery in order to breathe life into her blade. She worked tirelessly, conducting a different ritual every night at midnight.

Time and time again she failed. But after countless tries a mysterious figure appeared before her. Clad in full plate armor and wielding a giant mystical sword, it was otherwordly. It spoke a magic incantation and Ivy’s blade sprung to life. With the ritual complete the entity vanished just as mysteriously as it appeared.

The next day Ivy set out on a course to find and destroy the accursed blade that had driven her adoptive father mad and ruined countless other lives.

The armoured being — Nightmare — soon returned to offered aid with her quest. She helped Nightmare in its Harvest of Souls. Her exact role is never stated. But considering that Nightmare’s Harvest of Souls meant slaughtering innocents and absorbing their souls into its cursed blade the optics looked pretty grim. 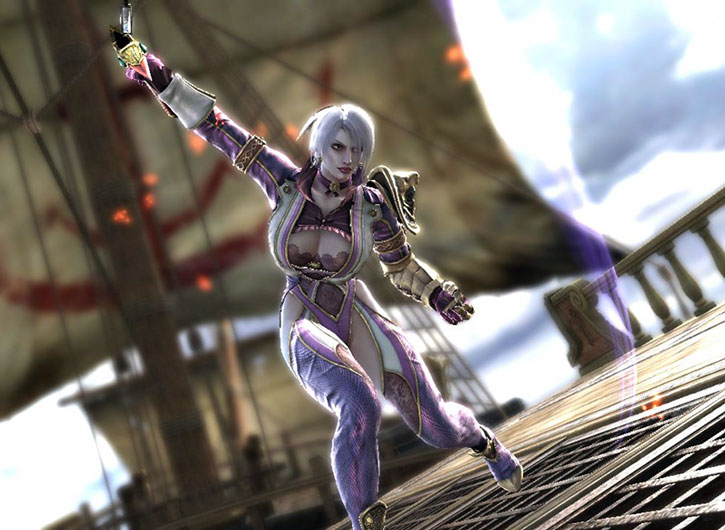 At the climax of the game Kilik, Maxi, and Xianghua came to Ostrheinsburg Castle to put an end ot the evil Soul Edge. Maxi fought Asroth to avenge his crew while Kilik and Xianghua overcame Nightmare. As she struck the final blow, Xianghua discovered that her blade the Krita-Yuga actually was the legendary Soul Calibur – Soul Edge’s holy counterpart. She thus shattered the evil blade with a mighty blow.

Ivy’s role in this battle was never stated. But she likely witnessed the blade’s destruction. With nothing further to gain she retreated. On her way out she was confronted by a mysterious ninja named Taki who had also sought out to destroy the evil blade. Taki magically sensed that Ivy was a part of Cervante’s cursed lineage, giving her ties to Soul Edge.

Ivy was devastated to learn that. Not only did she have an unbreakable tie to the cursed blade she sought to destroy she had also unknowingly assisted it in furthering its agenda. Confused and distraught she lashed out. But Taki took pity on her and evaded the fight.

Now more alone and heartbroken than ever, Ivy wandered back to the Valentine’s crumbling estate.

Ivy locked herself in her lab and conducted unsuccessful experiments to destroy her Ivy Blade. She relented, still needing a powerful weapon if she was to rid the world of the Soul Edge. Isabella renamed her blade Valentine to show her commitment.

Then she heard rumours about a return of Soul Edge. Her actions didn’t have any major impact on the main storyline, so her quest presumably was unsuccessful.

The Valentine Blade grew erratic and more difficult for Ivy to control. She had to halt her quest to regain control of her intelligent sword. This struggle may very well be why she was unsuccessful in the previous game.

In London, she located a particularly promising book of occult secrets. But the immortal Zasalamel, the book’s author, came in to destroy the tome. He knocked her down, took the book and set fire to the library, destroying it and his work.

A lead brought her to an abandoned Far Eastern temple. It had been the home of Kilik and his order of monks. But fragments of the Soul Edge had rained down upon the temple and caused the monks to go mad and slaughter one another.

Therein, one Kong had the information she sought. He told her that her cursed lineage meant that the Soul Calibur would never allow itself to be wielded by her. Frustrated she left the temple and continued home. But during her journey she devised a workaround. She would create an homunculus with an artificial but untainted soul.

Shortly after she succeeded, Ivy was ambushed and killed by her father Cervantes. The undead pirate needed her energy to continue existing, having run around of Soul Edge fragments to drain. He absorbed most of her soul, prolonging his unlife.

However, Ivy projected what was lef tof her soul into the homonculus. She thus survived her death, and she could even still wield her magic sword. But she was certain that she was living on borrowed time. She needed to step up her efforts to destroy Soul Edge.

During the events of this game she somehow put Siegfried into a crystallized statue state and Cassandra, Sophitia’s younger sister, somehow accidentally broke him free.

(This is not explained very well. And anyway, the events are not considered part of the main story line.)

On her way to Ostrheinsburg Castle and the Soul Edge, Ivy ran into her father. This time, it was she who killed him. At this point the sky cracked open, signalling that another had destroyed the cursed blade.

(It seems that the destruction of Cervantes and Soul Edge also extended Ivy’s degraded lifespan.)

Ms. Valentine worked for ten years to travel to the Astral Chaos dimension  . That was where Soul Edge’s power came from. Ivy intended to cut the blade’s power at the source, in case it were recreated.

Cassandra defeated Ivy in the Maze of the Dead. This let Cassandra explain that she wasn’t peforming dark rituals as Ivy had thought.

With the misunderstanding cleared up, Cassandra continued on her journey.

Ivy has a basically identical origin to the one she was given in her first appearance in the original SC. This is despite SC6 rebooting  the SC continuity.

She’s got a few other costumes including a period admiral uniform and a costume that was clearly modeled after Anna Williams from Tekken.

Ivy fits the Anti-Heroic Unwanted Power motivation to a tee. Her life was destroyed. She is constantly haunted by her cursed lineage. Therefore, her one goal is to destroy the Soul Edge. She has no interest in friendship, romantic relationships, or hobbies. Her entire existence is consumed by her mission.

“Silence ! I can change my own destiny !”

“This is the end of my cursed journey.”

“Curse me all you like. I don’t expect forgiveness.”

“A servant of Soul Edge… I cannot allow you to live.”

“But I didn’t know what it truly was until after seeing the complete sword.”

(Said to Siegfried.) “Too many sins have been committed by both of us.”

“At last I can let my tears fall.”

“Time to destroy you, I suppose.”

In her first appearance her Gadgetry, Occultist, and Scientist were all one AP lower and she had the Oblivious Drawback. 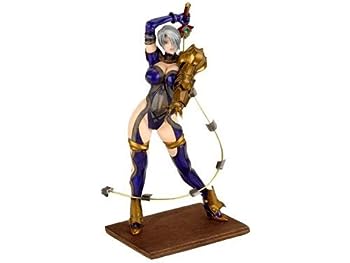 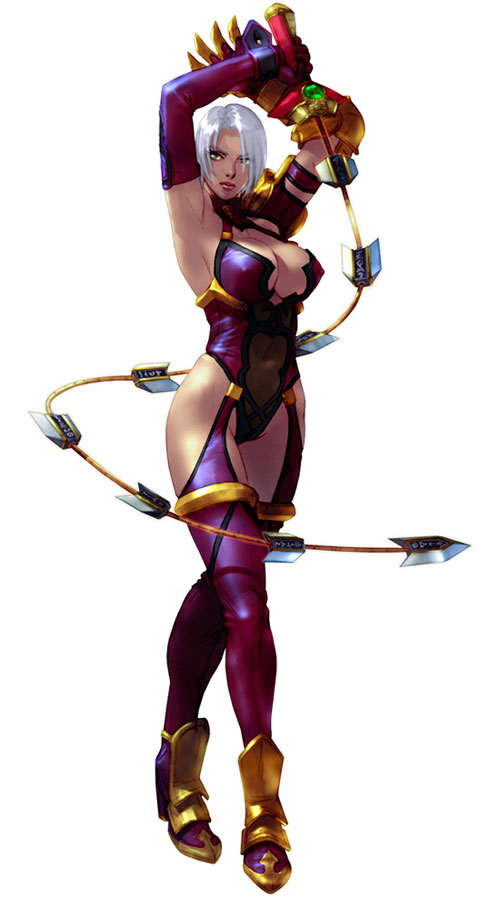 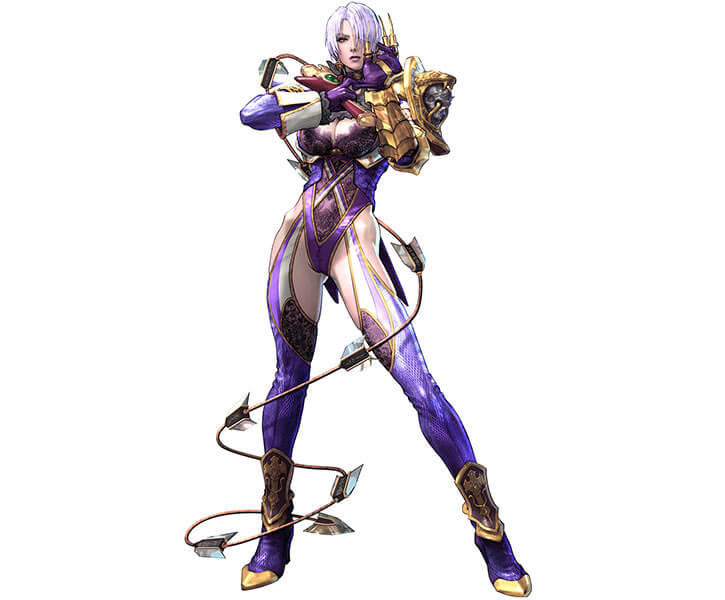 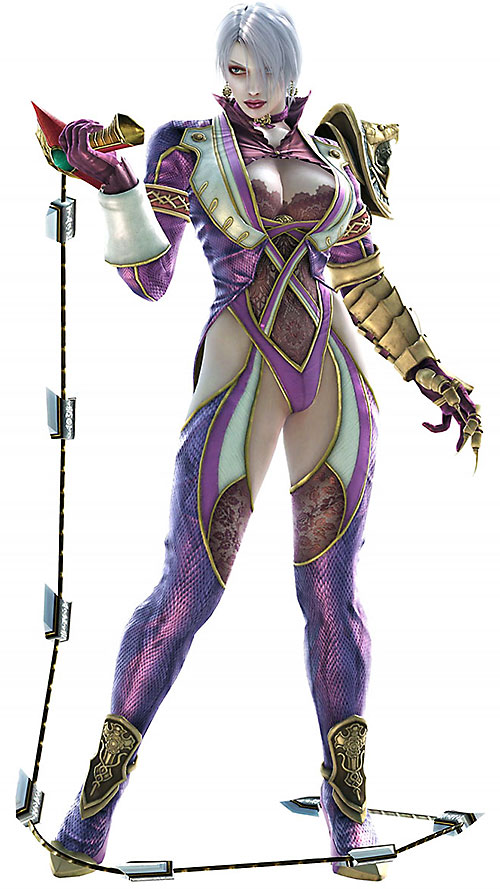