To avoid S P O I L E R S for the series, which I can recommend, don’t read the “Revenant” section, or the history from “Hunted” onward.

As a “zombie” (actually a revenant) Gwen is stronger than she appears. She is also highly resistant to pain, though she doesn’t heal from any wounds inflicted upon her.

To avoid her mind slipping away, Gwen must consume brain matter at least once a month. This process also forces her to experience the mind of the deceased for a while. As a result, she feels compelled to deal with any unfinished business they had.

Gwen rose from her grave with only scattered memories of her past. Befriending local ghost, Ellie, Gwen set up a pad in one of the crypts. She took a job as a gravedigger so she had access to the brains she needed to stave off mindlessness.

They then befriended local wereterrier, Spot. Together they clear up the unfinished business of the souls whose brains Gwen consumes. They hang out at Dixie’s Firehouse malt shop. Gwen tried to produce a picture good enough that Dixie’d be willing to hang it on the walls with those of other artists.

When a soul’s desire for his killer to be caught led Gwen to John Amon, she learned he was undead like her. She also realised that her meal hadn’t been innocent. Amon revealed that Gwen, like him was not a zombie but a revenant.

He also fed off souls, but did so without devouring brains. He preferred living targets who were bad people – a murderer in that case.

Amon offered to teach Gwen how to use her abilities. But she demurred repeatedly, something about him putting her off.

She began dating cute visitor Horatio, even after learning he was a monster hunter for the Fossor Corporation. She managed to keep it secret from him. But that only lasted until a major zombie outbreak from caverns under the city caused a national emergency.

It drew a squad of Fossor hunters and the Dead Presidents – undead serving the US government. They dealt with the zombies, and the city was placed under martial law. Gwen kept her head down, staying in her crypt.

However, Amon insisted she needed training quickly, due to the danger posed by Xitalu – a giant, dimension-travelling, force of destruction. Xitalu’s arrival was more immediate than he’d believed. However, Gwen then had a flash of memory that Amon was responsible for her death.

Events gathered pace. Gwen recalled enough to remember Amon had convinced her to end her life for the greater good, but hadn’t killed her. He told her about Xitalu, and how he’d made her a revenant like him so she could absorb the souls of everyone in the city in order to stave off Xitalu for a few more centuries, dying in the process. 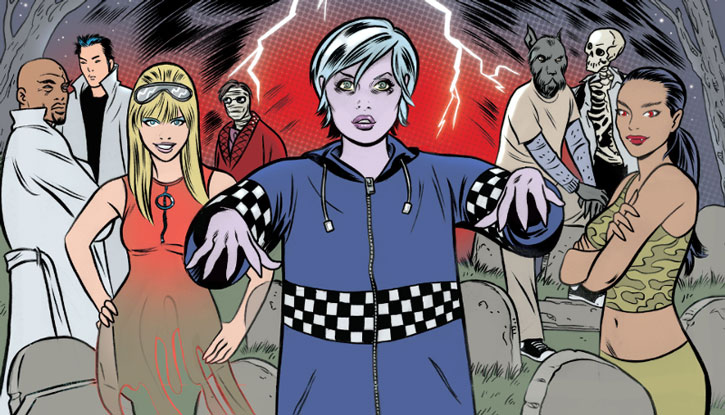 The city was overrun by monsters, heralds of Xitalu’s coming. This forced the Dead Presidents to order an evacuation. In the chaos, Gwen was reunited with her parents and brother, as well as Horatio, who’d forsaken the Fossor’s for her. Xitalu appeared in the sky moments later.

Amon’s insisted that draining the souls of everyone in the city was the only way to beat Xitalu. But Gwen realised Xitalu itself was one large, powerful, soul. She completely drained it, but gained so much power she was no longer able to stay in Earth’s dimension for fear of destroying it. She set off to explore other dimensions.

All living things more complicated than a slug have two souls: an oversoul and an undersoul.

Death normally sees both souls depart. But on rare occasions one or the other linger. They may remain in their original body, inhabit other bodies, or wander bodiless.

Bodiless oversouls, retaining the memories and personality of the deceased, are ghosts. Some may possess other bodies. 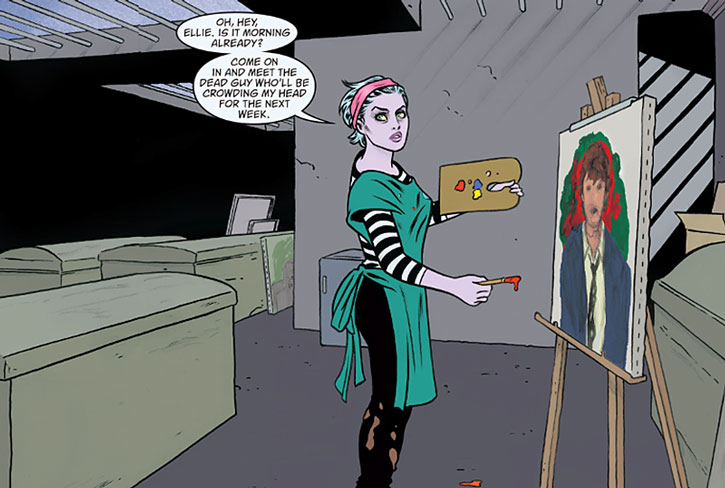 Bodiless undersouls, retaining only appetites and emotions, are poltergeists. Animal undersouls occasionally find homes in other bodies that begin to take on their traits, becoming *thropes.

An oversoul remaining in its body is a vampire. Their lack of an undersoul causes them to thirst for the emotions and fears carried in the blood.

An undersoul remaining in its body is a zombie. Their lack of an oversoul causes them to hunger for the memories and thoughts stored in the brain.

More rare is a revenant, where both the oversoul and undersoul remain in the body. They still require the consumption of other souls, since their own souls aren’t meant to remain in their body after death.

Exceptionally pale, Gwen’s body is well preserved enough that she can pass for a goth chick with odd makeup.

Easy-going and slightly distracted at times, Gwen tries to live as normal a life as she can. While anxious to retain what memories she still has, Gwen won’t kill to survive. She doesn’t like anyone seeing her eat brains, and hates the taste.

While she believes her condition compels her to help the souls she consumes find rest, it’s actually only Gwen who feels this compulsion. It’s her empathy that forces her to act.

She has little interest in making contact with anyone from her past. She is afraid of them seeing what she’s become, and has only partial memories of her life anyway.

“Sometimes the things I have to do for dead people can be, well, pretty unpleasant. Solve mysteries, make peace with grieving survivors, finish all sorts of unfinished business. And, of course, there’s the whole eating brains thing.”

After training with John Amon to fight the coming Xitalu, Gwen learned more about her revenant abilities. She became capable of separating her oversoul from her body to let it wander (Spirit Travel: 06).

He also taught her that she could absorb the souls of others without having to devour their brains, increasing her own power. This was intended to allow her to drive off Xitalu, but on realising Xitalu was itself a giant soul she turned the ability on it.

She has 15 APs of Power Drain (Can only drain Mental and Mystical Attributes and Powers, and it is considered Killing Combat).

During this period she has 25 HPs, and Self-Link (Animate Dead) at 15 APs. 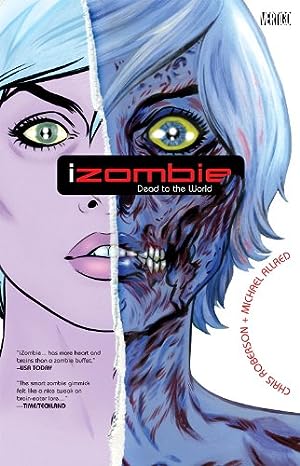 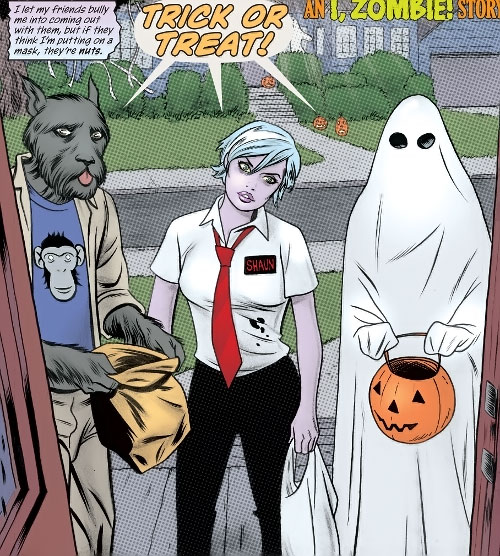 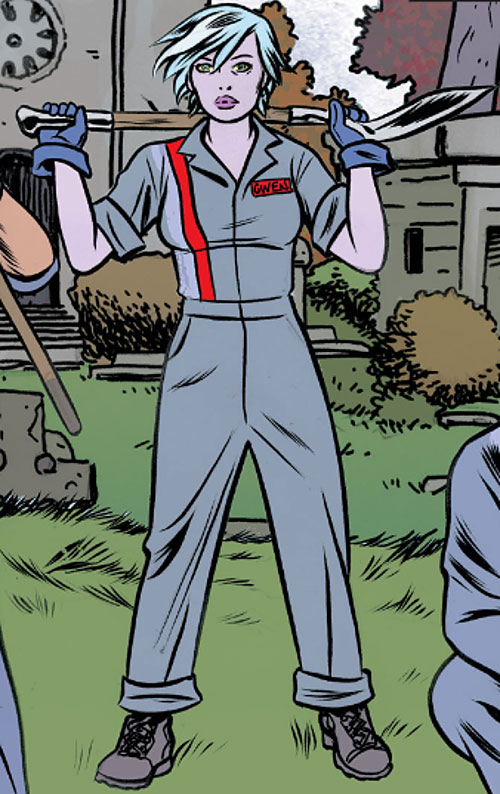 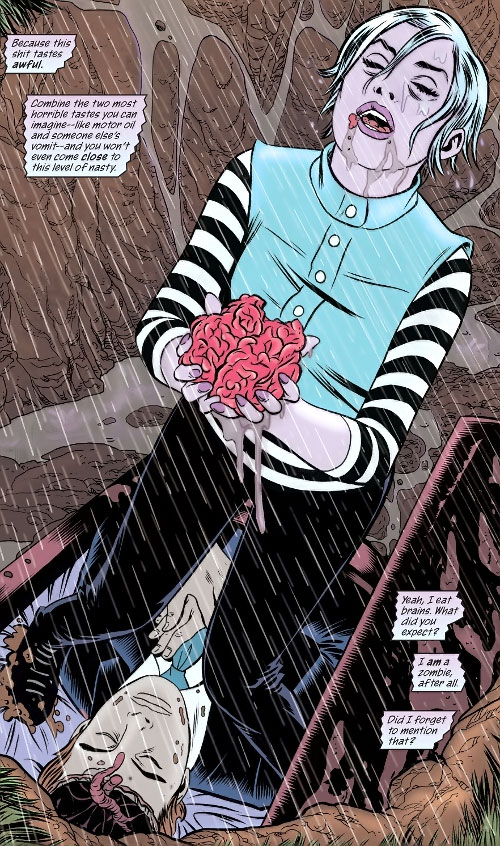 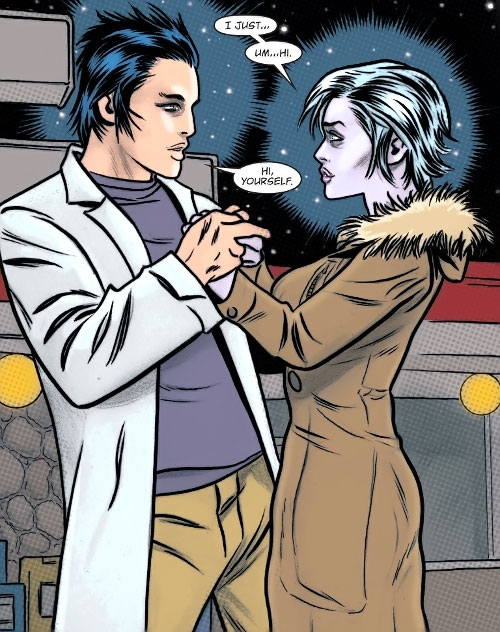