Agony Acres was a mid-1990s indie comic books (published by AA2). It was a police procedural in a near-future setting, if I remember correctly.

This writeup is very old, and was done either while the series was still running or shortly after its end.

Jack Calhoun was a prisoner of war during the Argentine/South America Conflict, but the comic does not tell much about the war. Upon returning, he was partnered with Bethard “Lucky” Bishop. They were in pursuit of drug dealer Bobby Smack in the arena when the first murder took place.

Calhoun and Bishop were making their report to Captain Hill when Mr. Wraithbone, who manages many Agony athletes, came in and told the Captain that one of his fighters has died during an agony match. From that moment Calhoun headed up the investigation.

The first step they take in the investigation is to go question Casey Longmasters, an up and coming rookie in the Agony circuit. His moves in the arena at times seem to be those of a 10-year veteran, and the murder victim was competing against Longmasters at the time of his death.

So that the detectives can get a feel for what Agony is all about, Longmasters invites them to watch from the Virtua-Pit.

At the match when Longmasters is fighting in a jungle scenario, Calhoun has a flashback to when his tank was disabled during the war and he was taken prisoner. This is when the second victim is murdered.

Calhoun looks to be about 5’ 11”. He is usually seen in a brown or blue suit. He has brown hair and blue eyes (I think : they look brown in a couple panels in issue #1).

Calhoun at times has acted as if he has an ego the size of the house.  He can be impetuous, taking unnecessary risks at times. Conversations with Lucky indicate that he is not above crossing certain lines to get the job done. 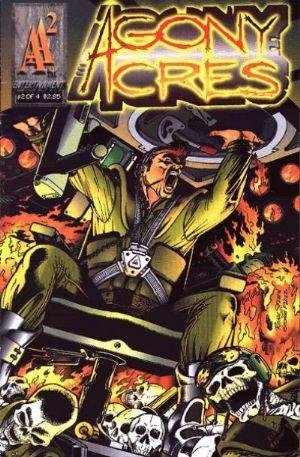