The King of the Cold has a number of cold-related superpowers. He can :

Jack Frost also has wind-related powers, such as Superbreath, Fog (a snowstorm) and Flight.

He seems to be fully amphibious, swimming at great speed and breathing underwater. His offensive powers do not work when he’s too deep underwater, though.

Jack Frost is a quick and powerful two-fisted brawler, apparently possessing a degree of superhuman strength. He is also majestic and domineering.

There are two abilities that Jack Frost may or may not possess:

The origins of Jack Frost are unknown, apparently even to himself. His first memory is of walking in the Arctic as a child, without an adult in sight. How long ago that took place is unrevealed.

Rumours posit that Jack Frost has some ties to Asgard and the Nine Worlds. If so, he might be some sort of diminutive ice giant. This seems to be purely speculation by fans, though.

Jack Frost was discovered in 1941 by one Dr. Forbes, who had found gold in Alaska. Forbes’s associate, Mike Zelby, fatally shot the doctor to get all the gold for himself. When Jack Frost came, the dying Dr. Forbes asked him to protect his daughter, who lived in New York City. Frost decided to go fight crime there.

However, when Frost introduced himself to the NYPD’s Commissioner, he was considered a madman. The strange man stormed out after having had a little fun with his ice powers and the expense of nearby policemen. This made him a wanted man.

Frost bought himself a suit and a hat (presumably using money Forbes had given him) then found Zelby and his mob. He easily defeated the criminals, freed Ms. Forbes and let everybody else to die in an accidental fire. Given his enmity with the police, the moody Jack Frost was declared a murderer. He would often cause trouble by resisting futile attempts at arresting him.

Jack Frost later discovered a corpse floating near a New York beach. Investigating the sucker marks lead him to the inevitable giant mechanical octopus crewed by evil criminals, whom he defeated.

Another adventure started with he discovered that criminals were intimidating hospitals into buying their products.

A third one was prompted by a disfigured chemist using a new formula to kill people by freezing them. The police accused Jack Frost of these murders until he defeated the criminal.

Piecing together the rest of the war years, part 1

Jack Frost then briefly retired from fighting crime, but kept monitoring radio frequencies. He thus responded when Bucky broadcasted a call to certain American super-heroes to assemble and form a Liberty Legion to free the brainwashed Invaders.

The Legion was made up of the Patriot, Miss America, the Blue Diamond, Red Raven, the Thin Man and the Whizzer. Frost was the one member who had come without being specifically called.

Piecing together the rest of the war years, part 2

The Liberty Legion fought Nazi fifth columnists throughout the North-Eastern US until the Red Skull had little choice but to send the hypnotised Invaders after them. Jack Frost and the Blue Diamond repulsed the Submariner before he could destroy the Statue of Liberty.

The Legion then fought the mind-controled Invaders at Yankee Stadium, with Jack Frost clashing with the Human Torch. The Nazis were defeated, the Invaders recovered their free will, and Jack Frost saved the public at the Stadium from the flaming debris of the mandatory exploding Nazi zeppelin.

Later in 1942, the Liberty Legion allied with a time-travelling Thing (Ben Grimm). The ever lovin’ blue-eyed Thing helped the wartime heroes defeat a number of Nazi menaces such as Skyshark, Master Man, Meranno (aka U-Man), and Brain Drain before returning to the future.

Some weeks later, the Legion was defeated and captured by the armoured Iron Cross. But they managed to escape and repulsed the “one-man panzer division” with help from the Invaders. Jack Frost may have left the Legion at that point since he wasn’t with the group in late 1942 during their last known adventure.

Around 1946, Jack Frost returned to the Arctic to investigate his own origins. However he soon ran into the monstrous Ice Worm, who attempted to swallow him whole. Grabbing the monster’s rear end, Jack Frost had it swallow its own tail then froze it from the inside. This plunged the worm into suspended animation.

However, Jack Frost then had to will himself into an hibernative state. Decades went by. His form, trapped in deep ice, was found. A local legend grew about the god in the ice, whose presence prevented the demon ice worm from coming back.

(A flashback set in 1953 depicted Jack Frost attending a funeral, which I assume was a continuity goof.)

In 1991 Captain America investigated the rumours of a man frozen solid in the Arctic. In so doing, he unwittingly freed the Ice Worm. He was swallowed, but this revived Jack Frost, who saved Cap and got them out of the gargantuan creature’s gullet.

The Ice Worm attacked again. Whilst the star-spangled Avenger was busy saving a local, Jack Frost decided to sacrifice himself again to stop the demon. Using the same stratagem as before, he froze the monster and himself and they disappeared under the ice (video).

Jack Frost owns cold-immune trunks and boots. But if he’s wearing normal clothing and want to use a good amount of his power he’ll have to strip for action or destroy his clothes.

Like many 1940s heroes, he enjoys showing off and humiliating his foes. And he has no problem with leaving them to die if he knows they are murderers, traitors and the like. In fact he openly prefers to do so.

Jack Frost seems to consider crime and evil to be unacceptable and offensive. He vigorously stomps those whenever he is given the chance. This is not solely a moral stance – he also does it for the excitement, and it is hard to say how much of his motivation is Seeking Justice and how much is an heroic Thrill of Adventure.

Jack considers ice to be his element. Thus, he gets irate when somebody uses ice against him or to commit a crime.

Jack Frost often leaves behind a stalactite with the letters “J F” sculpted in it as his calling card. Like Namor, he enjoys making up alliterative ice-related exclamations such as “Freezing fudgicles !”, “Popping penguins !” or “Sizzling snowballs !”.

By the end of the war, Jack Frost had apparently discarded the Thrill component of his motivation. Despite his professed annoyance with foolish mortals, he had become a true protector.

“You fools ! I have come to help you and you mock me ! Very well then, I shall fight crime in my own way ! Perhaps you will soon regret having been so sceptical !”

“I am Jack Frost, and I have come to punish you for the murder of Dr. Forbes !”

“I was quite willing to fight man to man. But now you want to force me to fight against odds ! Therefore, remember you have brought this upon yourself ! Now, you shall feel the fury of the storm !”

“Well, foolish mortals, what are you gaping at ?”

“Sizzling snowballs ! Where am I ?”

“This’ll teach him to be polite, if he lives !”

“I have no name… but mortals have called me — Jack Frost ! This will show you why !”

A possibility would be to twist the Liberty Legion and reinvent them as Nazi operatives, in order to have more baddies for a World War Two campaign.

In this context, Jack Frost would surely have ties with Norse mythology, and might even be portrayed as a giant (slap about 6 APs of Always On, Form-Function Growth on him and call him Frost Giant).

Bonuses and Limitations:
Medicine is Contingent on Ice Control, and can only be used to treat ice- and cold-induced wounds.

Connections:
Liberty Legion (Low, and this Connection seems to only have existed in 1942).

Drawbacks:
Distinct Appearance, Exile, Mistrust (until he joins the Liberty Legion), Socially Inept, Loss Vulnerability (all of his EVs are diminished by (depth in APs minus 2) APs when underwater). 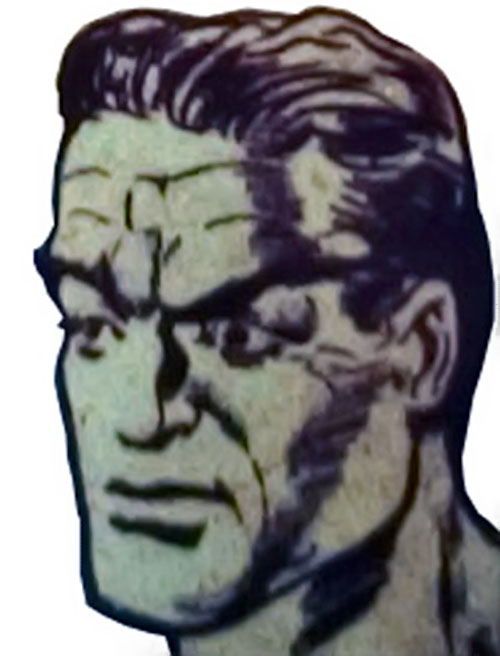 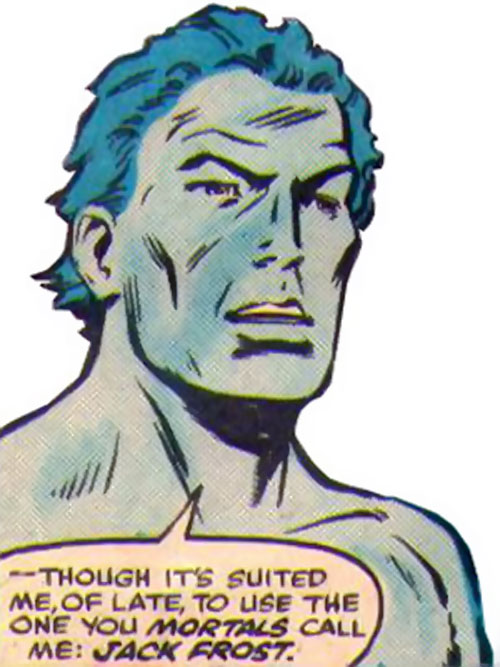 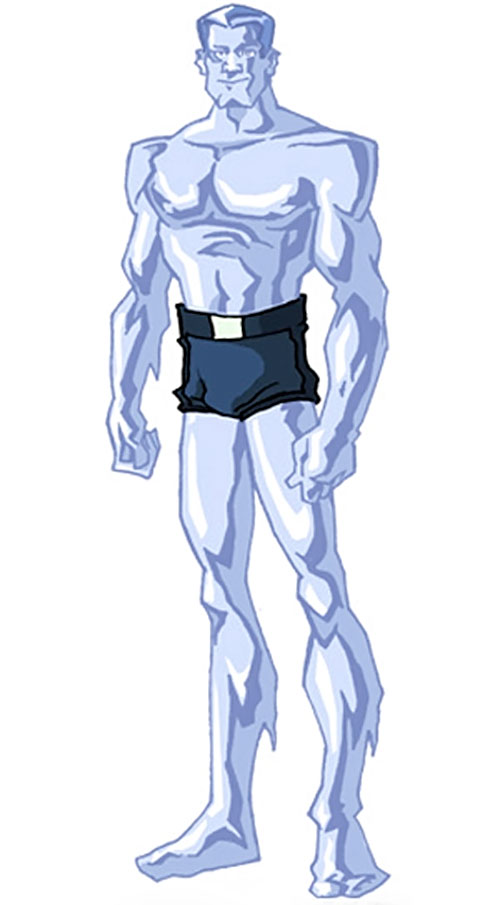 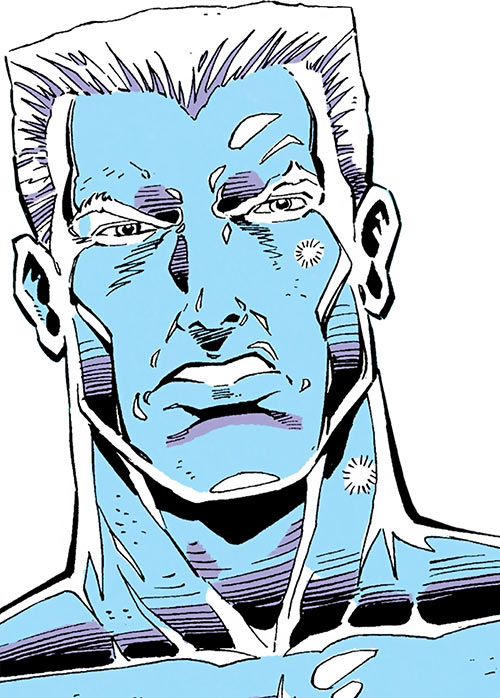 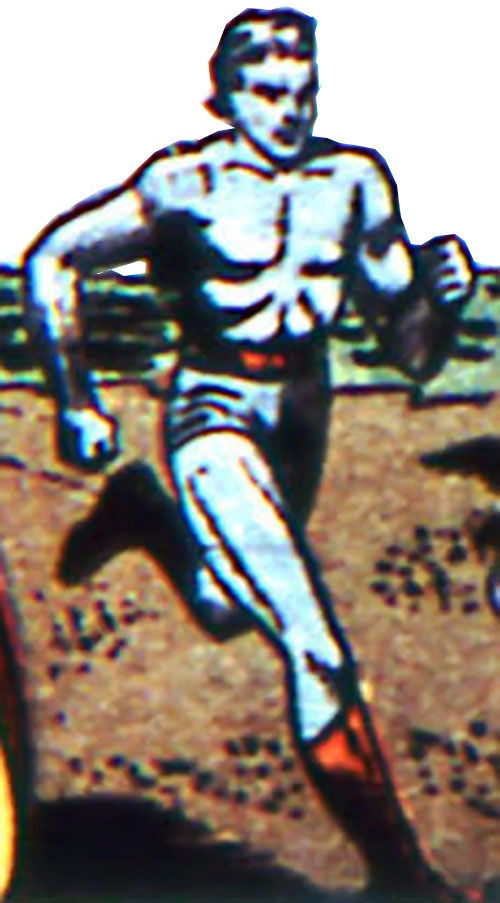 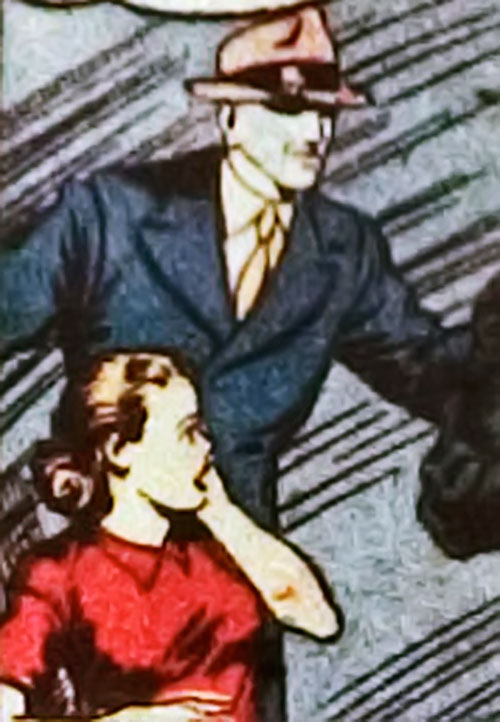 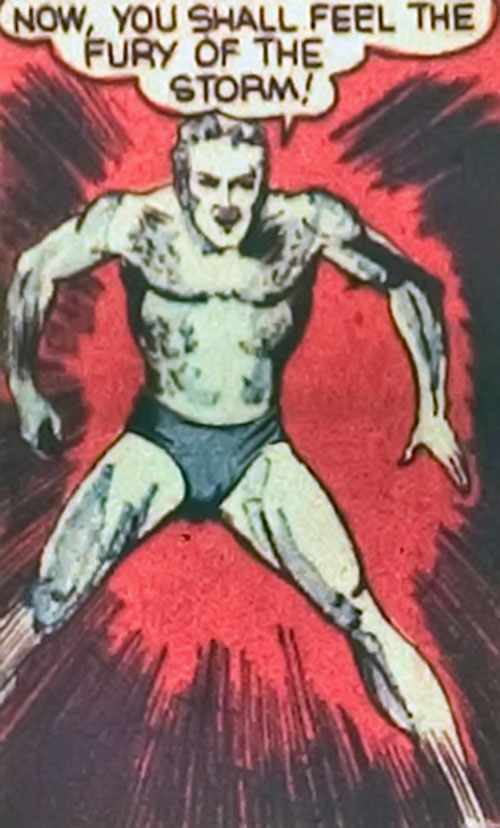 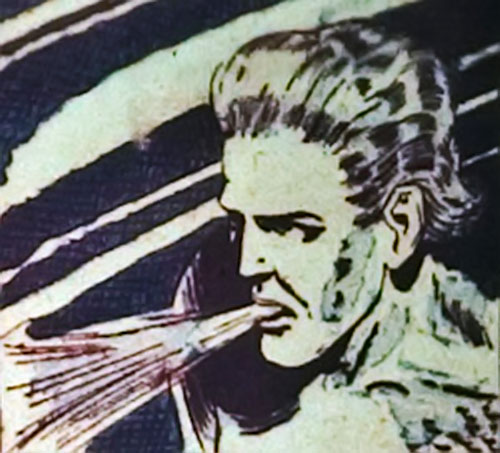 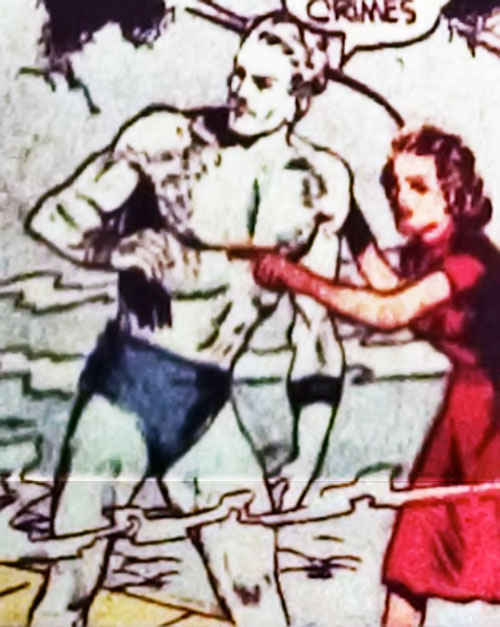