Moses is a talented killer and mercenary, a cut above most soldiers of fortune. He’s also an ex-athlete – a former Pan American games champion jumper.

Jack Moses used to be a champion long jumper, well known among athletics fans. At the peak of his career, he married a fashion model. They honeymoon was an African photo safari. However, the couple and their guides ran into rhino poachers.

The poachers opened fire, and only Moses survived. He somehow made it back to the camp, and happened on government rangers – who were just taking their weekly bribe in rhino horns. Moses snapped and killed them all using stolen weapons.

The taste for killing got in him, and he was good at it. He worked both sides of the Rhodesian war, then Angola and numerous other conflicts. During this time, he became an alcoholic. His activities became more and more risky, and he’d take any job, not matter how horrible or dangerous.

At one point he and other mercs were hired to blow up a supposedly empty Iranian freighter to prevent it from shipping ammunition. However the ammunition was moved in ahead of schedule, and when their explosives went off 30 tons of ammo followed.

An oceanography research vessel with numerous students aboard was also destroyed by the explosion.

Moses’ death wish metastasised. He returned to America to die, leaving a clear trail for ASIO  agents to follow so they’d kill him. While in Seattle, he met Green Arrow and saved his and Dinah’s life during a hold up.

Green Arrow followed his trail, and reached an uneasy alliance with the ASIO agents. He had a discussion with Moses, but the mercenary was finally cornered by the ASIO men.

Moses is an obvious alcoholic, but manages to keep his head on his shoulder and cool nerves most of the time.

Moses is wracked by nightmares over the death of his wife, and is desperately looking for death.

His is a vicious circle of putting himself in dangerous situations, not dying because he’s skilled, murdering opponents to survive, and heavy drinking due to the guild of having killed so many men.

He carries a framed photograph of he and his wife everywhere.

“Take a look around. A crowd like this… somebody was going to get killed here, pal. Better them, don’t you think ?”

Bonuses and Limitations:
Jumping is a Skilled Power and only works for horizontal jumping (-1). 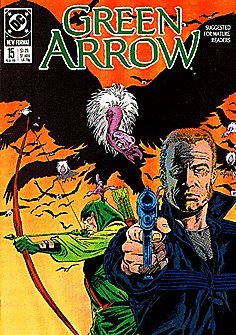