The second Jackal had all that and a superior physical strength and speed to match it up with. He could defeat two Spider-Men in combat with little effort and thus didn’t really fear anyone in physical combat (fear is actually an unknown concept to him).

The genetically modified clone also had a thick fur and long claws on each hand. His great, pointed ears supposedly had better than average hearing.

The Jackal needn’t involve directly involve himself with his enemies, but instead used various clones to do the dirty work for him. These clones were approximately as powerful as the original except for the mental and mystical departments in which they were lacking. All in all, the Jackal, in both incarnations, was a deadly and worthy foe of Spider-Man.

The second Jackal, believing itself to be the original, and possessing abilities beyond those of the original, continued Warren’s plans (from ’Maximum Clonage‘ and forward). He created several clones of his nemesis Peter Parker alias Spider-Man. Then he used these for tormenting Spider-Man and killing innocent humans by releasing new lethal viruses of his creation.

These viruses are said to be mutated versions of the so called Carrion-virus, which is responsible for turning people into beings like the Carrion.

He appeared at approximately the same time as the old clone of Spider-Man that Warren had created, Ben Reilly (known as the Scarlet Spider). The Jackal played psychological tricks on both on them. Even the second oldest clone, Kaine, was fooled by various tricks. Jackal II created a new Gwen Stacy and told the Spider-Men that she was the original one, but that was also, of course, a lie.

A third clone of Spider-Man was also made, which would later evolve according to its programming into the being known as Spidercide. The clones named Jack, Ben Reilly and Gwen Stacy all later died.

After having served time in prison, and escaped on his own whim, he finally fell off a rooftop to his death while in combat with Spider-Man. While falling, he activated a last implant in Peter Parker, by a posthypnotic vocal order, which later made him attempt to kill his wife Mary Jane.

In high probability, the results of the insane science of Professor Warren aren’t yet finished. But further clones of Spider-Man or the Professor himself will eventually surface again. The second Jackal, as did the first, did rely so much on secondary and backup plans that it seems impossible that the threat would be permanently over.

The Jackal II looks like a large, humanoid and green jackal on two feet. He’s a developed, slender muscularity, pointed ears, a jackal-like face and clawed limbs. He’s ordinarily seen in a trenchcoat of dark colors and everywhere he goes follows his insane rambling.

The second Jackal is, much like the first, a manipulator without peer. In fact, he might be called the world’s greatest manipulator and liar (with emphasis on liar).

He’s almost always babbling like mad either to himself or to his enemies or allies. Jackal really is insanely mad, but his forceful personality and his psycho-tricks really affect his enemies the way he wants them to be affected.

He thoroughly enjoys gloating, playing, intimidating and persuading anyone and does so incredibly well. The second Jackal actually believed he was the original Jackal remade into stronger form, when in truth he was a clone of him. Much like Warren, the second Jackal was obsessed with Gwen Stacy and wanted to torment Spider-Man (or any clone of him) more than anything else.

Being horribly intelligent his plans always had several backup plans. Although it would probably have been wiser to perform various crimes in low profile, he apparently enjoyed having the maximum number of heroes and the police after him. Of course, he also has a desire for drama and wants to make his entrance as cool and impressive as possible.

He was babbling like a fool while being pursued, but really succeeded in sounding like a man that has several secrets and knows truths that nobody else knows.

For such a man it is no surprise that his sense of humor was quite morbid. He often joked about death and such. Additionally, he viewed Spider-Man and his clones as his sons. The second Jackal was actually even madder than the first and the recklessness that follows proved to be his undoing and end.

“That’s exactly what’s so fun about being a criminal, my son ! You heroes always need to be so logical and well spoken and in contact with you inner selves ! ‘I‘ only need to care about spreading death and mayhem !”

Hmmm… Jackal is Spider-Man’s greatest foe ever. Using him as anything else decreases the meaning of this excellent enemy.

He would, in the DC Universe, probably be the archenemy of a young hero that has accidentally been the cause of a girlfriend (a girlfriend that he would be obsessed with). There are some such personas such as, for example, Green Lantern Kyle Rayner and Damage IIRC.

Since cloning is so central in the life of the Jackal, and he’s extremely scientifically proficient, it might be possible to put him in the future world of the Legion of Superheroes. He either used or is responsible for the batch SW6 Legionnaires.

Advantages:
Genius, Headquarters (several Expansive), Lightning Reflexes, Scholar (Biology, Chemistry, Genetic Engineering, Induced Mutation, Psychology), Misc. Any enemy that has been a prisoner of the Jackal may have been brainwashed without him/her knowing it ; for a fee of 25 HPs, at any time, the Jackal may have implanted any memory or a temporary IA (all from MIA to CIA for a HP cost equal to the base bonuses (5/25/50)) into the victim.

The clone banks. I won’t even begin to describe this apparatus in stats and powers. Basically the proper user can create a clone, a genetically identical, full grown copy of anyone from a small cell sample. Apparently the clone possesses the memories of the original in suppressed form up to the time the sample was taken. Jackal can activate these memories so fully that the clone really believes himself to be the original character.

The Jackal always implants memories in his clones (and captured victims) and often uses post-hypnotic suggestions, as well, that are activated by a situation or a spoken phrase to give rise to a certain programmed emotional response.

Often he lets clones believe that they are the originals and vice versa. The opposition for breaking against such programmed impulses is using the mental stats versus a set value of OV/RV 15 APs. The opposition for the original character to see through fake implanted memories may be even higher (meaning Jackal has spent HPs on his Psychiatry/Implant roll). The finished clones or even programmed originals can be made to change their Motivations, as well.

Bonuses and Limitations:
Jack’s dwarf-like stature means that his Shrinking is always on and factored into stats already.

Description:
Jack appears to be a miniature version of the original Jackal, but actually is a failed clone of Spider-Man.

Personality:
Jack is a psychopath with a curious streak. He obeys the professors orders as long as his curiosity is met and he feels reasonably safe. If threatened, he will try to flee. 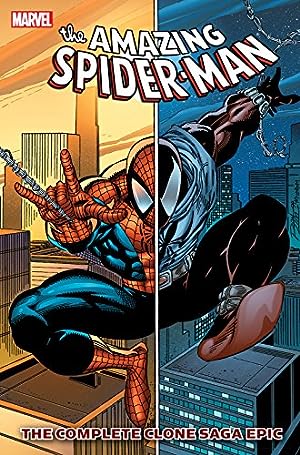 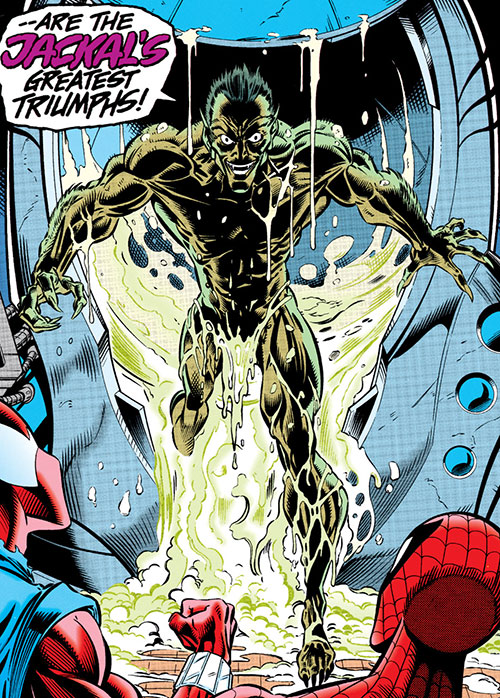