As far as can be determined O’Gara’s skills are chiefly about B&E, with a strong high-tech orientation. She seemed confident that she could defeat the security systems of a high-tech U.S. military base. Whether she has other espionage skills is unrevealed.

As Jackdaw/Blackbird she wears a lightly armoured, winged suit allowing for rapid flight. She can manoeuvre in silence and with significant agility. We have assumed that the suit was proofed against radar, lidar and other means of detection since she could approach Gamma Base from an altitude without being spotted.

The game stats also assume that her suit could provide her with painkillers, as she repeatedly showed an excellent ability to handle and recover from pain. Perhaps there’s a light medical system in there that could more generally take care of light wounds, poisoning, etc..

On the other hand Blackbird needs her arms free to fly her suit – presumably she can’t manoeuvre if she cannot direct her wings. Her lifting capacity is also limited to about 250 lbs. in cargo.

A grappling claw — a projector shooting a clawed bit trailing entangling cables — was later seen to the Blackbird suit. She has one on each forearm, but once shot to entangle an opponent they are expended.

As Jackdaw, Heather O’Gara worked as a spy for hire specialising in high tech and B&E. One imagines that industrial espionage was her main gig.

In 1982 she was hired by the Leader (Samuel Sterns) to stealthily raid the weapons lab of the abandoned Gamma Base. Jackdaw successfully breached the lab, thanks in part to a disruption recently caused by the alien Bereet – who had sent her pet Sturky to eat the automated security systems in the base.

Using an access card provided by her employer, Jackdaw got into the lab. However she was distracted by the impressive robot Megalith, and couldn’t resist trying it out. Her little joyride quickly brought her face-to-face with a passing Hulk, and in the subsequent fight demolished Megalith.

The feedback from the damage was extremely painful, but Jackdaw collected herself and flew out undetected but empty-handed. Though she did not want to report failure to the the psychotic Leader, she knew that fleeing would be pointless.

Working for the Leader is rather awful

The Leader disciplined O’Gara in an unspecified but painful manner. He then had her act as his servant as he schemed to destroy the Hulk. Jackdaw thus delivered a batch of the Leader’s androids to Banner’s apartment, where they kidnapped Bereet and Rick Jones.

However, O&rsdquoGara then discovered that the Leader’s plan was to send gamma energy back in time. This would retroactively turn everyone into gamma mutates. Not wanting to be changed, Jackdaw turned against the Leader but was badly beaten by the Omnivac android.

O’Gara survived. After the Leader banished the intervening Avengers into the past she took her revenge against the damaged Omnivac, dismantling its electronic brain before it could make the banishment permanent. The leader of the Avengers, the Wasp (Janet van Dyne) decided to just let Jackdaw go.

Some years later O’Gara changed her name to Blackbird and came to work for Superia (Deidre Wentworth). Wentworth was launching her Femizons project, an attempt to produce a women-dominated Earth based on observing the Earth-715 alternate future (“Femizonia” – see Thundra’s profile).

Blackbird seemed to be part of Superia’s core staff, along with the scientist Nightshade (Tilda Johnson), and the enforcers Iron Maiden (Melina Vostokovna) and Snapdragon (Sheoke Sanada).

From a comment she made, it would seem that Blackbird was specifically recruited by Nightshade, who seemed to act as Superia’s XO. This recruitment took place not too long after O’Gara’s 1983 misadventures with the Leader.

Not the love boat

Before launching her plan Superia invited a throng of costumed female criminals to a free luxury cruise to make her pitch. Having come to the mistaken conclusion that their friend Diamondback (Rachel Leighton) had been abducted, Captain America (Steve Rogers) and Paladin boarded the ship.

They were intercepted on their way by Blackbird and several of the guests, but Blackbird was overpowered by Captain America. Cap, Paladin and their allies aboard the ship eventually defeated Superia’s plan.

Blackbird, Snapdragon and Iron Maiden continued to work as Superia’s security, and accompanied their principal to the very successful A.I.M. weapons expo of 1993. Superia went to meet and assassinate Alessandro Brannex, then the head of A.I.M. – but he turned out to be the Super-Adaptoid.

Her bodyguards tried to reach her, but Blackbird and Iron Maiden were unable to breach the A.I.M. force fields separating them from Superia. Meanwhile, Snapdragon was very nearly killed by Diamondback.

Blackbird and Iron Maiden made another attempt to recover the captive Superia, but Brannex’s ally MODAM shot Blackbird out of the sky. O’Gara hasn’t been seen since.

On a few panels Blackbird was portrayed with dark brown skin. That almost certainly was a colouring mistake since she was light pink in the rest of the issue.

Jackdaw didn’t come across as terribly mature. She was easily distracted and seemed very impulsive and poor at long-term planning. It is possible that she is actually a kid who happens to be brilliant with tech but lacks life experience.

O’Gara is a follower, and seems to much prefer work for some sort of mastermind. She seemed quite loyal toward Superia.

“But how could I resist when a weapon designed to subdue the incredible Hulk was left, ripe for the picking ?”

Connections:
Underworld (Low). Formerly had a Low Connection with Superia.

The stats are tentative – Blackbird wasn’t seen in action much. 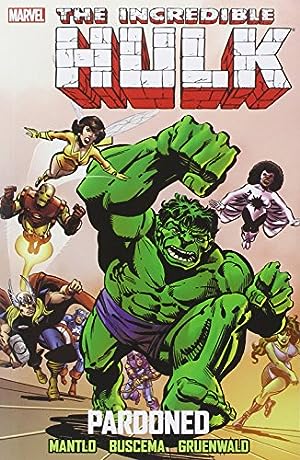 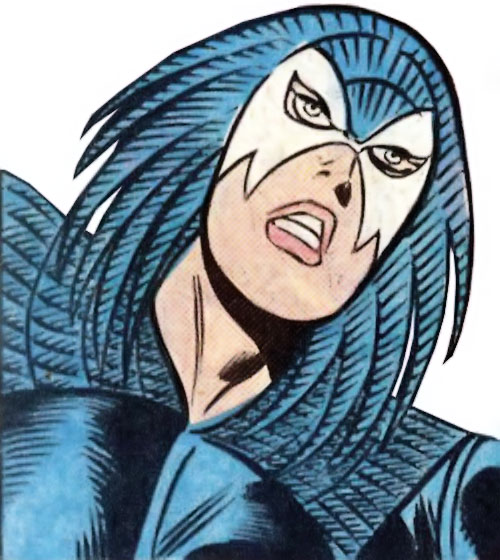 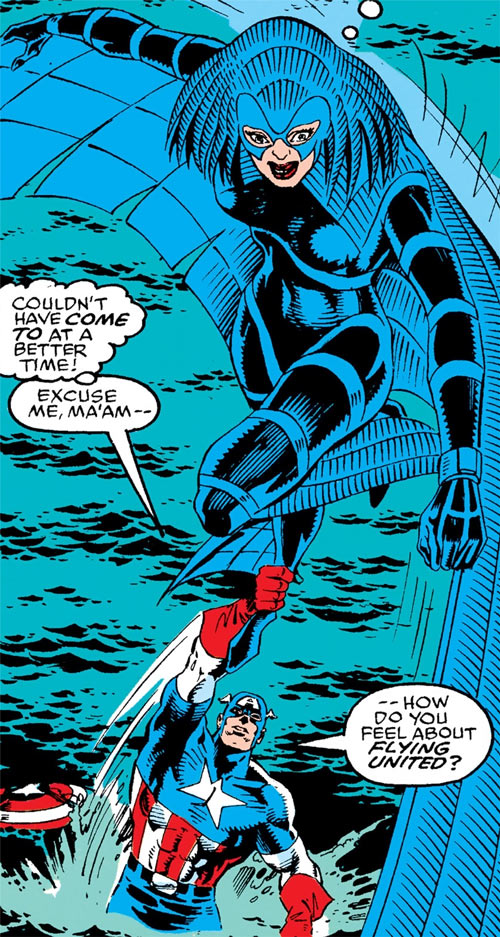 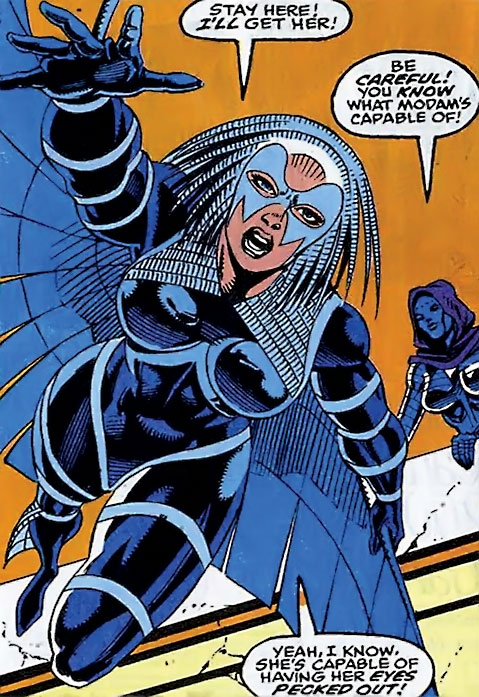